EIGHT DOMESTIC CASES and four imported cases were announced at the Central Epidemic Command Center’s daily press conference today. Four of the newly found cases were already in quarantine. There were five cases in New Taipei and one case each in Taipei, Taichung, and Taoyuan. 86.3% of cases to date have been released from quarantine. This is the first time that cases have dropped to single digits since the start of the outbreak.

According to Minister of Health and Welfare Chen Shih-chung, measures should be maintained through the next week, in order to break off transmission chains of COVID-19. Chen stated that the probability of lowering the level three alert is high and so preparatory work for the shift to level two can take place.

Any prospective lifting of measures will evaluate the situation next week and Chen noted that if the public viewed the measures as unnecessarily strong, they were likely to defy them. Hence any shift in measures will take this into account. That being said, Chen also stated that he believes the time in which indoor dining, group drinking, and KTV resume will not arrive right away. 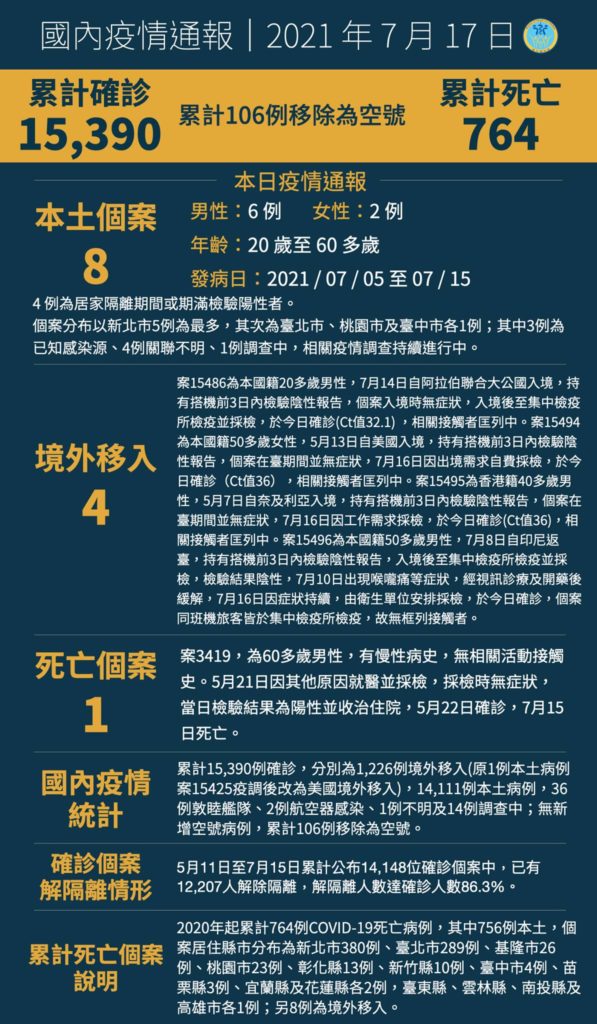 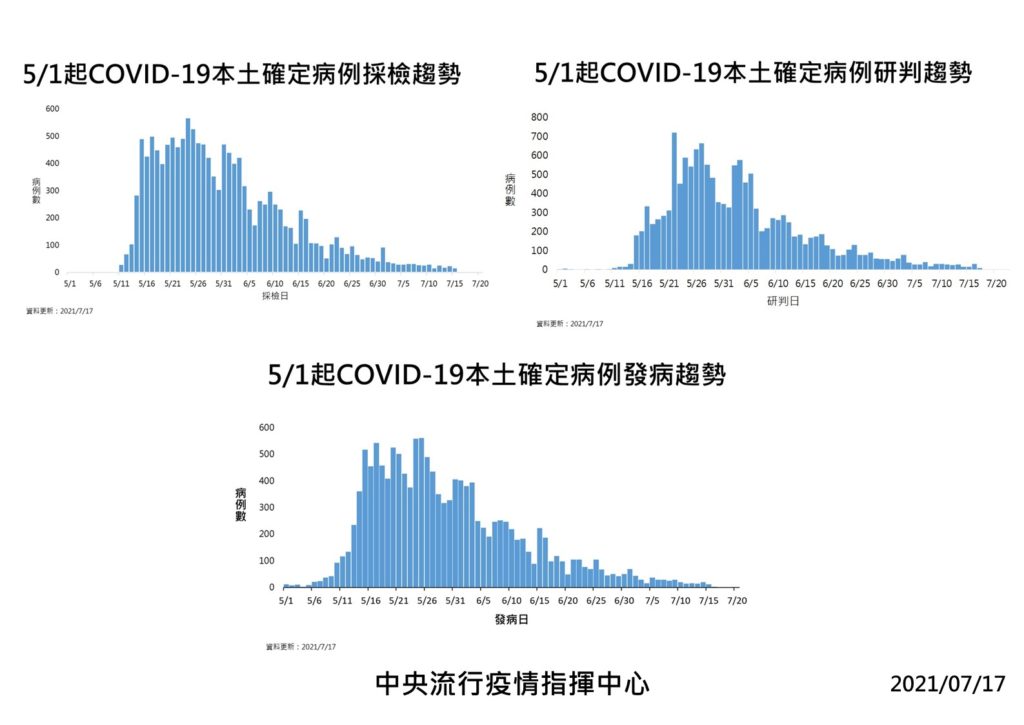 Information on the new cases from today (left) and further data released by the CECC (right). Photo credit: Ministry of Health and Welfare/Facebook

20.40% of the population is covered in terms of vaccination, with 20.93% having received at least one dose, and with more than 240,000 vaccinated on some days this week. Chen states that having more than 20% vaccination coverage has some effects, but that this is more visible with 40%, and that 60% should have close to herd immunity.

66.7% of those above 75 have been vaccinated. Of those between 65 and 74, this is 70.4%. 55% of elders are normally vaccinated for the flu. Efforts are still made to expand vaccination, with residents of long-term care facilities mostly vaccinated.

Chen announced the relaxing of some mask-related measures, within reason. Workers working outside without anywhere to eat are allowed to take off masks to eat if they maintain social distance. People living together can take off masks in cars while driving.

The current vaccine registration period has been extended to Monday. The CECC hopes that vaccination can continue if vaccine supplies continue to arrive. Chen stated that he is also aware that young people need to be vaccinated, seeing as young people also need to go out and work.

For second dose vaccinations, priority is increased in the vaccination registration system for individuals who were vaccinated over ten weeks ago. This mostly affects AstraZeneca vaccination.

Many questions today were about the possibility of mixing vaccines. As with before, individuals that react to their first dose of vaccine may be allowed to be vaccinated with a different dose of vaccine for their second dose. However, this is due to safety, not to increase efficacy.

A case of a taxi driver that claims medical staff accidentally gave him mixed vaccines, not noticing that he had an AstraZeneca sticker on his National Health Insurance card, and was suspended from work will be investigated.

The safety and efficacy of mixed vaccines or booster shots is still being evaluated, based on current research, while it is expected that in the future there may be more research on mixing Moderna vaccines with other vaccines. If mixed vaccinations can take place, this will alleviate some pressure on needing adequate supply of specific vaccines for second dose vaccination. The Chang Gung Memorial Hospital is conducting trials on mixing AstraZeneca vaccines with domestically manufactured vaccines.

Chen also took the opportunity to respond to disinformation claiming issues with vaccine shipments, consisting of information from the Food and Drug Administration about a vaccine shipment with issues. Chen stated that information was from vaccines from Japan that had issues, but that Japan publicized this to Taiwan itself, and that this was not the shipment of vaccines that was sent to Japan. Chen brought up that inspection of vaccine shipments occurs when they are sent out of Japan as well as when they arrive in Taiwan. To this extent, Chen stated that this information is normally confidential and publicizing this may affect Taiwan’s ability to purchase vaccines or other medical supplies in the future. 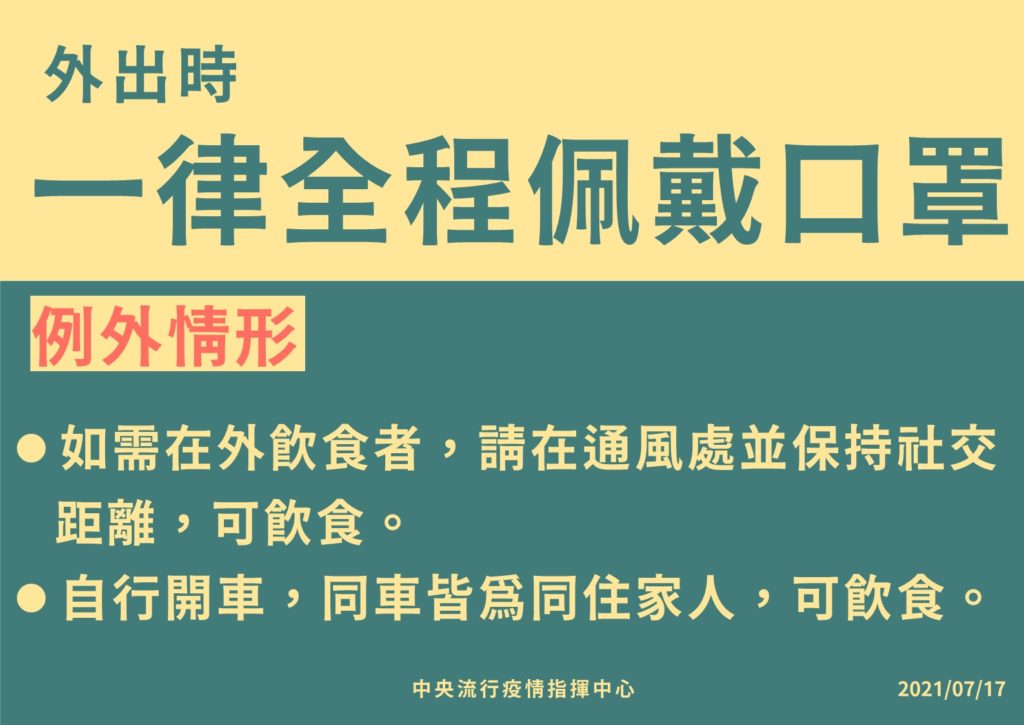 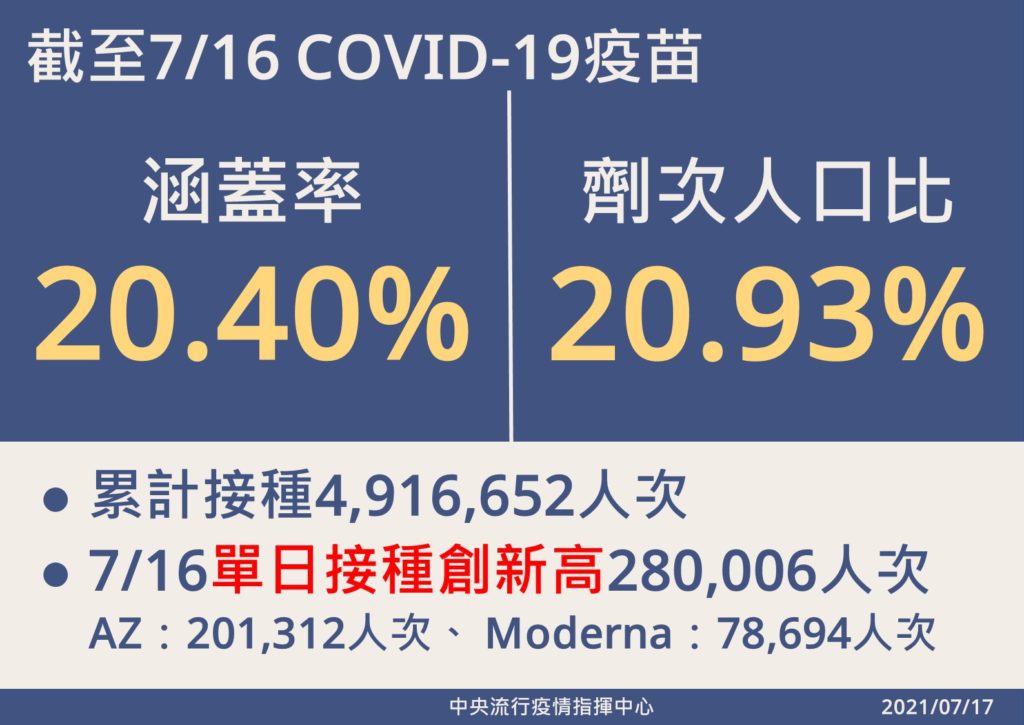 Information on the relaxation of mask-wearing measures (left) and on the vaccination rate (right). Photo credit: Ministry of Health and Welfare/Facebook

According to New Taipei mayor Hou You-yi, four of the five cases from today in New Taipei were from family gatherings, while one was due to infection at the workplace. Three cases were linked to Taipei, due to a worker being infected by their boss, and due to cases linked to the Huannan Market.

With parking restricted to 40% of normal capacity, New Taipei is observing whether there are crowds in scenic areas. Bitan and Jiufen do not seem very crowded, while there are more people who have gone to the beaches at Gongliao. New Taipei stresses that the density of crowds can be checked online before travel. Traffic on MRT, high-speed rail, and buses has increased 15% this week since the relaxation of some level three measures, while general traffic has increased 5%.

Taipei mayor Ko Wen-je cast doubt on the CECC’s numbers for today, claiming that there is three to four days delay reporting statistics between Taipei city and the CECC. That being said, when Ko has made similar allegations in the past, the CECC has denied this. According to Ko, Taipei is hoping to vaccinate all teachers before the start of the semester and will reach 34% coverage by July 22nd.

Ko believes that there are still cases in Wanhua, but that the TAPMC/Huannan Market cluster is mostly taken care of, as a result of which the Wanda Road testing station will be dismantled today. To address cases in the “K” section of the Taipei Main underground mall, the same measures as used for the Huannan Market cluster will be used, including vaccinating workers. Restrooms on the “K” section have been closed and disinfection will be increased for restrooms in the underground mall. The Taipei city government denied that the Neihu Carrefour carried out disinfection on its own, stating that stores are usually contacted to carry out measures before this is announced. COVID cases not living alone will be sent to quarantine facilities, seeing as 10% of contacts listed for cases later test positive for COVID-19.

Ko Wen-je also stated that former vice president Chen Chien-jen being informed that he was given a placebo as part of participation in domestically manufactured vaccine trials erodes at their legitimacy, but declined to comment on the recall campaign against Freddy Lim in Wanhua. Ko stated several times during the Taipei press conference today that COVID-19 would only be demonstrated to be eliminated if there were 28 days of zero consecutive cases, but that he did not advocate destroying the economy to get to this either, while also taking the view that Taiwan’s current situation can be maintained because of the Delta variant not entering Taiwan. Ko called for the use of mixed vaccines, calling on political leaders to be “braver” and take responsibility, and that this would alleviate issues with supplies. Ko stated that Taiwan’s successes fighting COVID-19 could be seen in that Taiwan did not have to resort to forced measures, as China did, and that he did not believe Taipei would be able to obtain vaccines through vaccine purchases, if Tzu Chi experienced issues doing so.

Yaung Chih-liang, who served as Minister of the Department of Health in the Executive Yuan under Ma Ying-jeou, has announced that he has been vaccinated with the AstraZeneca vaccine. The Executive Yuan’s Department of Health is the predecessor to the current Ministry of Health and Welfare. Yaung was a participant in United Biomedical’s vaccine trial, but testing shows that his body does not seem to have produced antibodies against COVID-19, leading to speculation that he received a placebo.

It is to be seen if Yaung’s actions encourage other participants in vaccine trials to get vaccinated with other vaccines before trial results are unblinded. More generally, there is increased discussion of the possibility of mixing AstraZeneca vaccines with other vaccines. 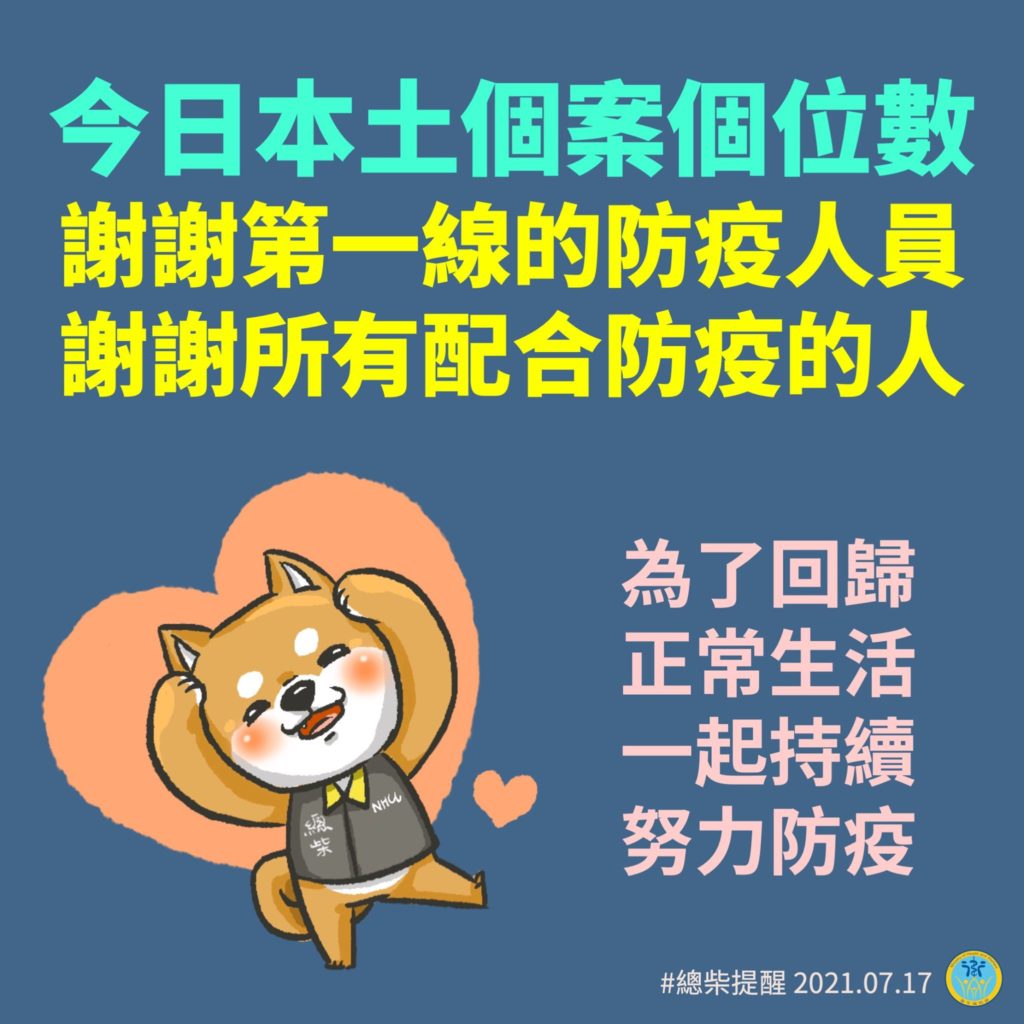 Image thanking frontline medical personnel for getting daily cases down to single digits. Photo credit: Ministry of Health and Welfare/Facebook

The Baoan Temple and Xingtian Temple in Taipei have reopened, with increased visitors today as a result. Visitors are restricted to under 99 individuals, however. The Leofoo Village Theme Park expects over 1,000 visitors this weekend as a result of the relaxation of level three measures. The theme park has been heavily hit by the pandemic to date, with 10% visitors of around 1,000 to 2,000 per day at some periods, and normally peak periods such as over the Tomb Sweeping Holiday in April only seeing half the usual visitors.

In a press conference held after a special meeting of the APEC summit focused on COVID-19, Morris Chang of TSMC expressed Taiwan’s need for vaccines. Chang was chosen as Taiwan’s representative to APEC by the Tsai administration for his fourth time representing Taiwan at APEC. Chang stated that Taiwan was willing to share its experience fighting COVID-19 and medical supplies with the world in the past, but that it requires aid now. Chang also asserted that efforts by countries to bring back semiconductor manufacturing chains to their own countries would drive up costs and called on the world to continue to adhere to principles of free trade.

The recall vote against Chen Po-wei of the Taiwan Statebuilding Party has been delayed until October 23rd by the Central Election Commission, given the current COVID-19 situation. The KMT was previously critical of the national referendum being delayed but Chen’s recall vote not being delayed, since low turnout might benefit Chen if that meant that the referendum would not meet necessary benchmarks. Chen has criticized attempts by the KMT to link his recall vote to the referendum as separate issues, which would likely boost turnout against Chen.

Following a donation of 10,000 vaccine doses to Taiwan by Slovakia, Slovakia has announced that it will be sending a ten-member diplomatic delegation to Taiwan in September.