14 DOMESTIC CASES and four imported cases were imported at the Central Epidemic Command Center’s daily press conference today. Seven of these cases were already in quarantine. Six deaths were also reported. There were nine cases in Taipei, three cases in New Taipei, and two cases in Taoyuan. 85.7% of cases to date have now been released from quarantine.

The press conference held by the CECC began at 1:30 PM today, which was thirty minutes earlier than usual. This was because Minister of Health and Welfare Chen Shih-chung is en route to Taoyuan International Airport today to thank Japan for its donation of 970,000 vaccine doses to Taiwan, Japan’s third vaccine donation to Taiwan to date, which is set to arrive this afternoon. 350,400 doses of Moderna and 560,700 doses of AstraZeneca from purchases by Taiwan are also set to arrive today. Close to two million doses of vaccine will arrive today.

The CECC thanked Japan for its vaccine donation. Akio Yaita, the Taipei bureau chief of the Sankei Shimbun, has stated that he believes it is possible that more donations will follow from Japan in the future. 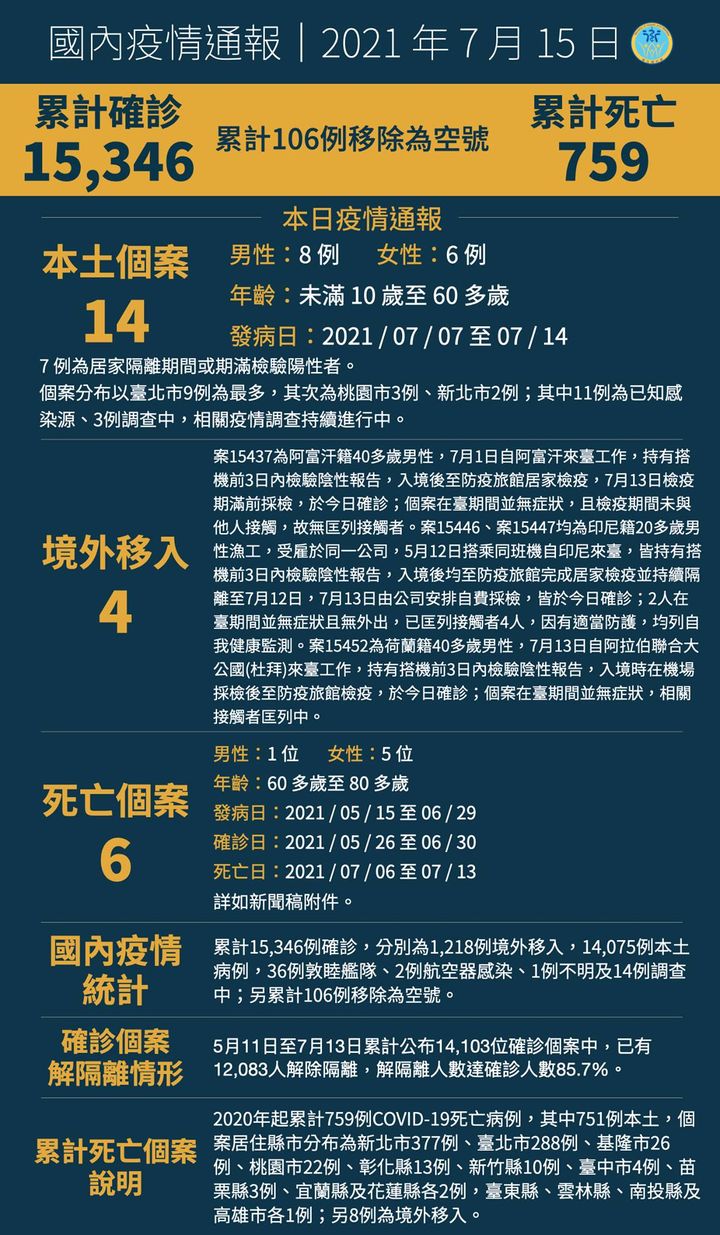 At least five individuals in Taiwan have been vaccinated with a mix of AstraZeneca and Moderna vaccines. Some of these individuals concealed what brand they were vaccinated with for their first dose vaccination in order to obtain mixed vaccines. At least one of these cases reports a fever after vaccination. It is to be seen whether the Taiwanese media next turns toward inflating the potential dangers of mixing vaccinations, much as media reports have also played up the effectiveness of mixing vaccines.

It will be up to the relevant authorities as to whether there are punishments for people that concealed information to be vaccinated with two different brands of vaccines. It is thought that this took place at large-scale testing sites, due to insufficient checks on if individuals had been vaccinated.

The rate of coverage for some places has been criticized as lagging behind the national average of 17%, with Nantou only having a coverage rate of 11.8%. Three of the four counties and cities controlled by the KMT have the highest vaccine surplus rate currently, with Nantou having 40.7%, Taitung having 34.6%, and Hualien having 32.9%.

Vaccine distribution in future rounds will depend on which brands that Taiwan currently has on hand. The CECC stated today that there was no need for Taiwanese citizens to fly elsewhere to get vaccinated using other brands of vaccine, however.

If individuals lose the yellow card they are given at the time of vaccination, this can be issued again using information stored as part of the National Health Insurance system. Documentation can be issued by local authorities if there is a need for other documentation to meet standards set by the World Health Organization.

In response to flip-flops in international reporting about the safety of mixing vaccines, the CECC reasserted its stance on waiting for more data about mixing vaccines.

Thirteen vendors at the Dalong Street Night Market in Taipei have been for reopening without applying to do so. Fines will be between 60,000 NT and 300,000 NT. 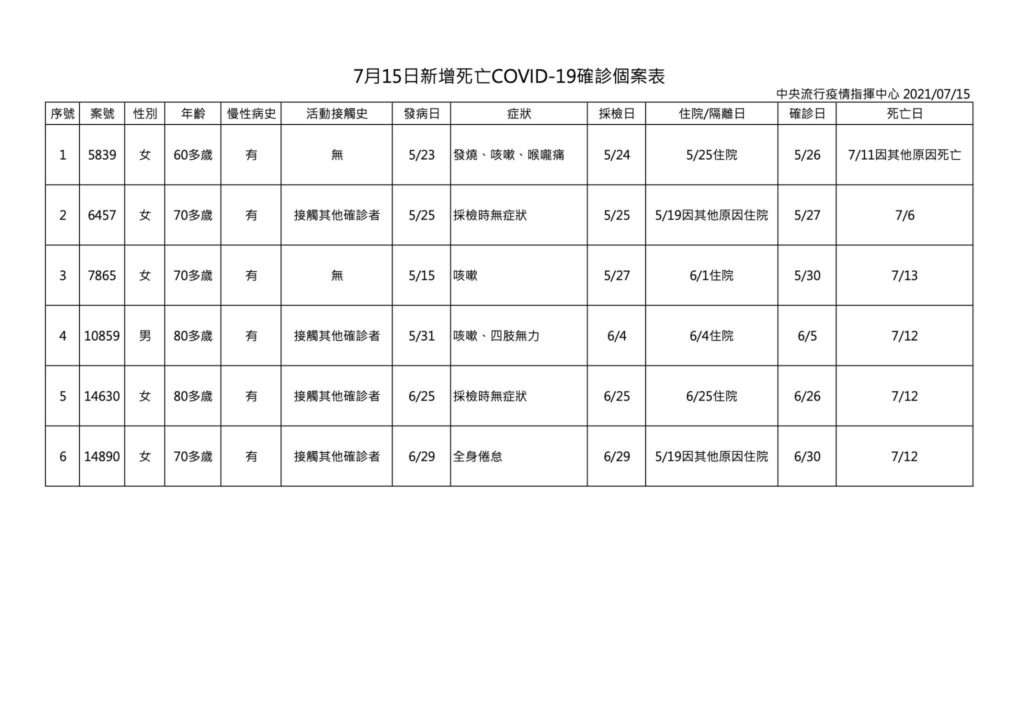 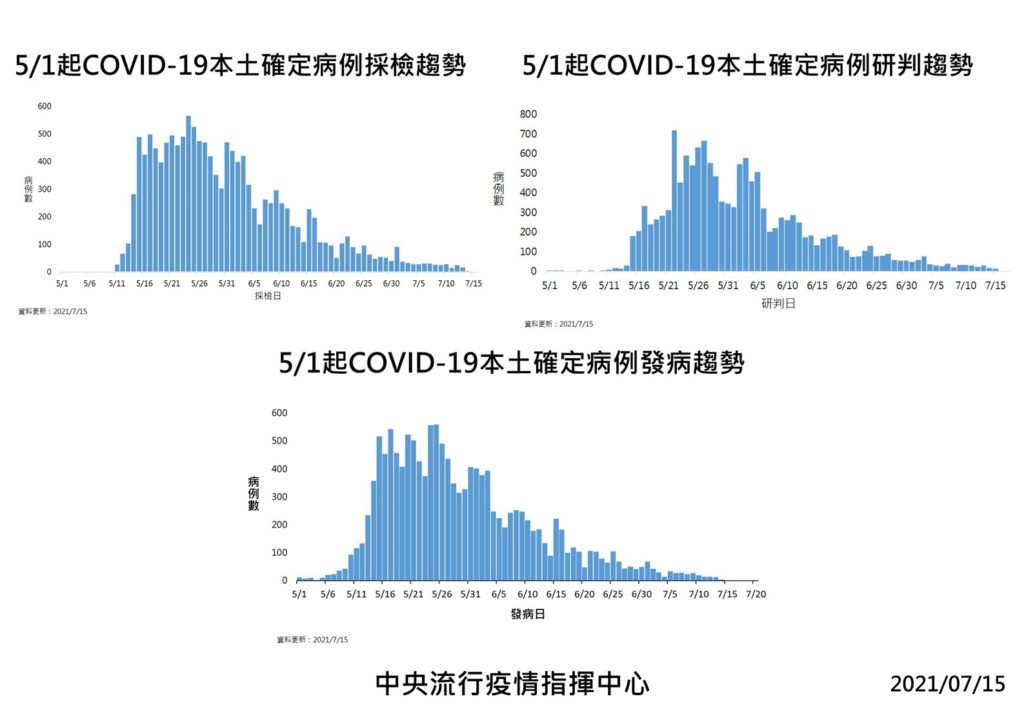 Information on the deaths from today (left) and the imported cases from today (right). Photo credit: Ministry of Health and Welfare/Facebook

Taiwan’s representative to Germany, Hsieh Zhi-wei, recently shared a post from German legislator Ulrich Lechte that he asserted backs up his claim that China interfered in efforts to purchase BioNTech. According to Hsieh, Taiwan was in talks to purchase five million doses of BioNTech that would have arrived by July before this fell apart due to suspected Chinese interference.

There has been criticism of the Kaohsiung city government for slow pace in vaccinating teachers, despite the fact that they should be included in category seven for vaccinations.

According to New Taipei mayor Hou You-yi, 1,228 asymptomatic patients were found from 185,000 neighborhood tests since the start of the outbreak. Today, Hou stated that one of the cases today in New Taipei was already in quarantine. However, five cases have been found through fourth-round testing of markets in New Taipei, from among contacts of the two cases from today, and neighborhood testing, meaning that there will be at least five cases reported for New Taipei tomorrow. Lizhang in New Taipei announced today that anyone above 65 can be vaccinated, without appointments. This seems to be a measure aimed at raising vaccination.

Taipei mayor Ko Wen-je stated today that Wanhua is still leading in terms of cases, with six out of nine cases from Wanhua today. Third round testing took place at the Huannan Market today, with 1,675 tests. Otherwise, Ko cited the example of the US of what could take place if Taiwan reopened too quickly, with reference to the lower rate of vaccination in Taiwan. Ko once again called on Taipei residents to use the TaipeiPASS system, stating that it could interface with other systems rolled out by the central government, such as the vaccine registration system, and avoid individuals having to download too many apps. This will begin at 10 AM tomorrow. 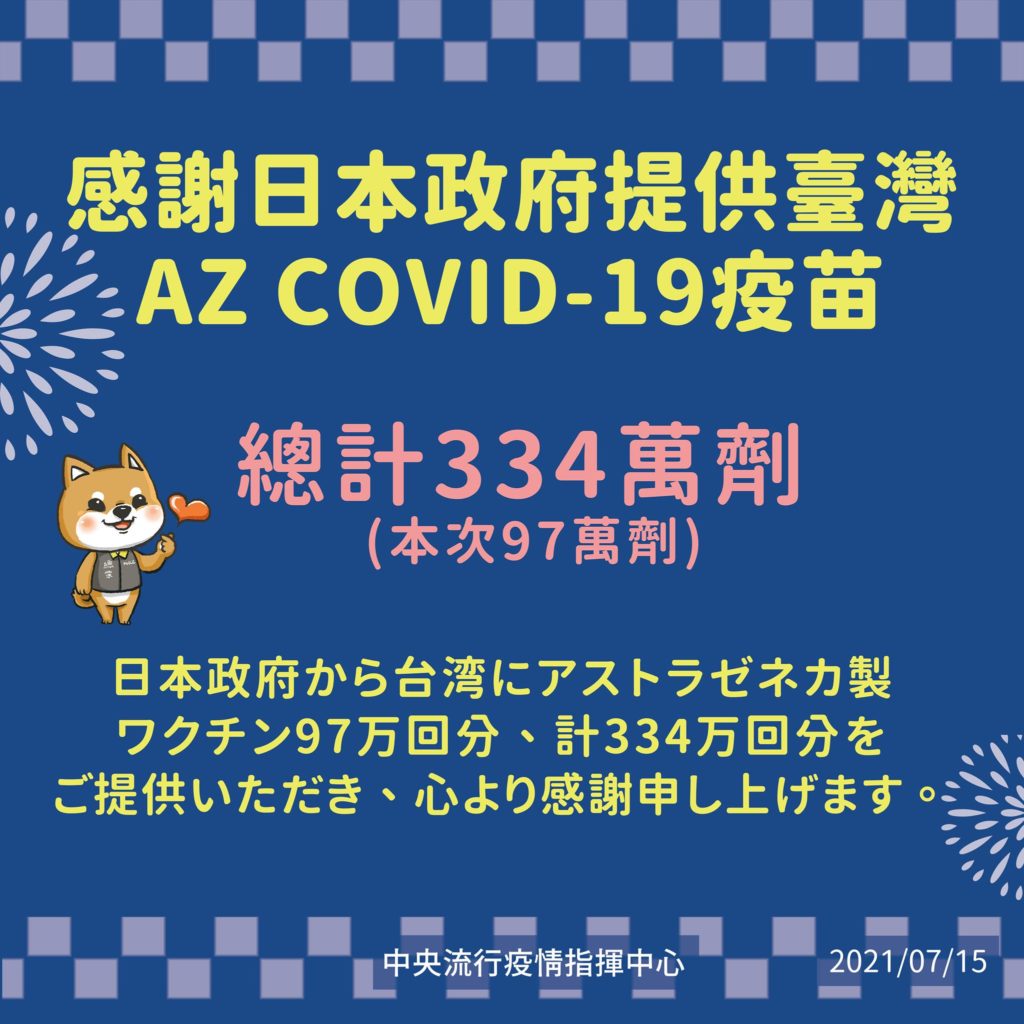 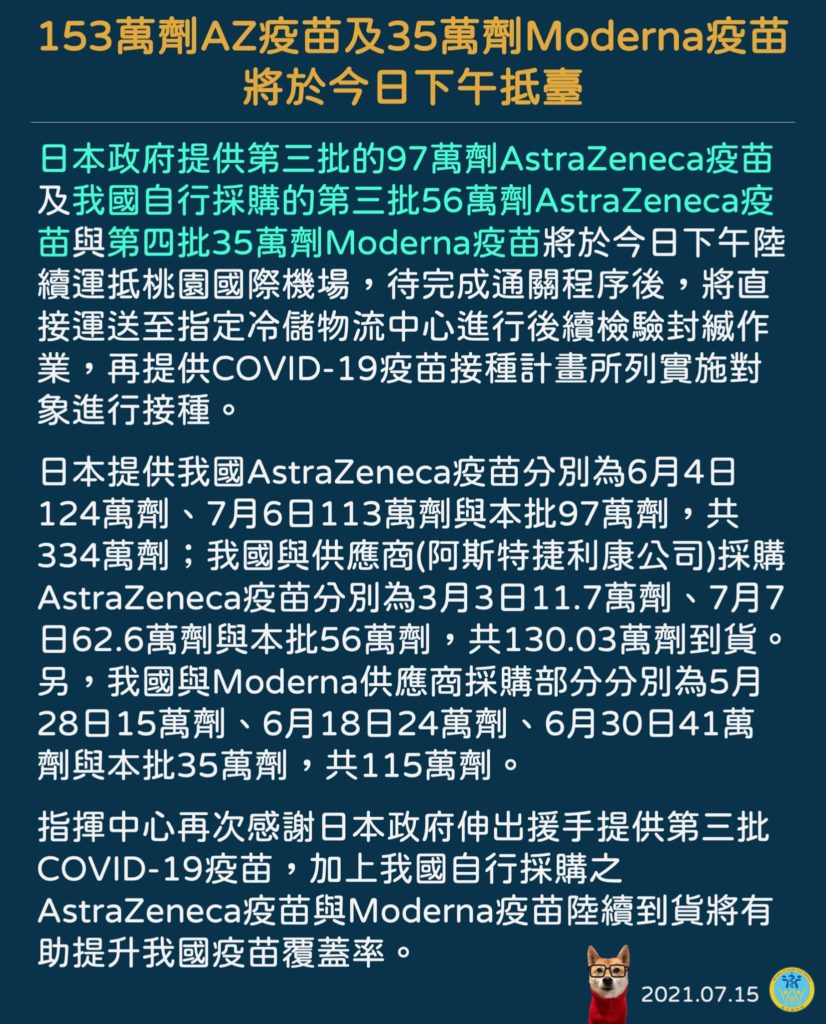 At maximum capacity, Taiwan can currently carry out 124,000 tests daily, at 207 institutions. However, Taiwan normally tests 20,000 to 30,000 per day, so Taiwan is not operating at maximum capacity in terms of the tests it conducts.

Taiwan’s team to the Olympics has over 90% vaccination, with two doses of vaccines. Athletes are required to have two negative PCR tests in the 96 hours before departure, twice before departing and once after entering Japan. Athletes will be tested every day once in Japan, while workers traveling to Japan with them will need to be tested every four days. Once athletes return to Taiwan, if vaccinated, they will require fourteen days of self-health management, seven of which must be spent in a quarantine hotel. If they are not vaccinated, they will require regular measures.

The CECC is monitoring the situation regarding export restrictions passed by Thailand to build up domestic supply of vaccines in order to cope with cases caused by the Delta variant of COVID-19. It is thought that vaccine shipments to Taiwan could potentially be delayed because of this.