17 Domestic Cases Announced in New Low Since Start of Outbreak 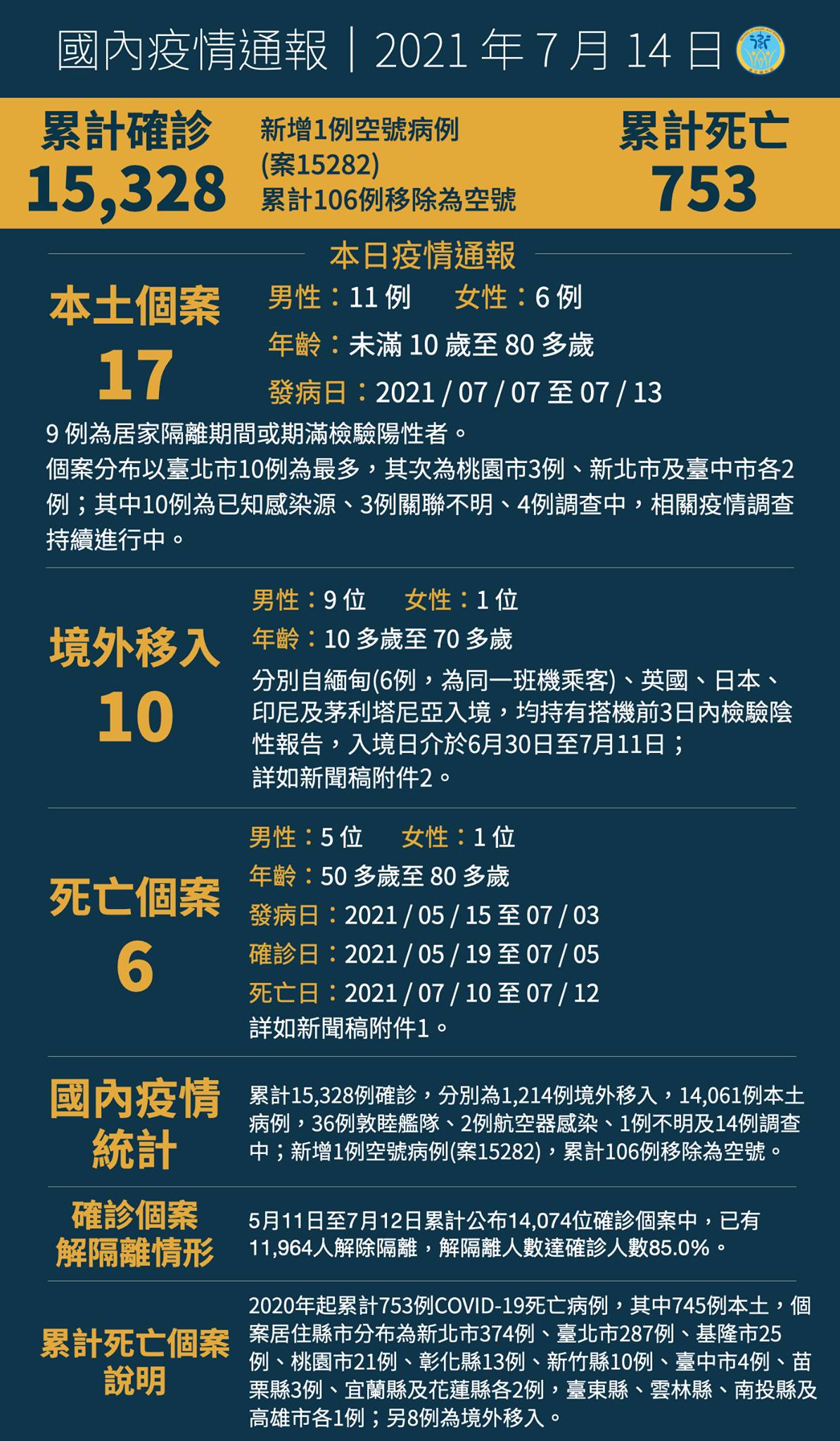 Quarantine areas will be set up in facilities for individuals with fevers or symptoms, while waiting for medical treatment. Work shifts will be divided, along with dining services. Disinfections must be carried out twice per day. Cases of COVID-19 must be reported within 24 hours, following which work must be suspended for fourteen days, and testing carried out.

The rate of coverage for vaccines has now reached 17.02%, with 17.39% having received at least one dose of vaccine. 242,353 were vaccinated yesterday. The CECC defended releasing statistics for individuals with one dose, listing international media outlets that were doing so, after being criticized with claims that no other countries were releasing statistics in this form.

Of 1,130,000 registered through the online system for categories 9 and 10, 849,760 have successfully made appointments. Statistics from registration will be released regularly. 390,000 individuals from 18 to 64 have registered online as of 1 PM. 2.09% chose AstraZeneca, 53.60% were willing to be vaccinated with either AZ or Moderna, while 44.30% were only willing to be vaccinated with Moderna. As Moderna supplies are lower, remaining doses will primarily be reserved for those needing second doses, with the Apple Daily reporting that three million registered on the vaccine registration system have specified that they only wish to be vaccinated with Moderna vaccines. This may lead to delays in vaccination. People can change what vaccine they choose without needing to register again.

There are reports of individuals with rare characters in their names experiencing difficulties registering for vaccines on the online registration system. Assistance will be provided when needed.

Foreigners can be vaccinated if they have Alien Resident Certificates and National Health Insurance cards. The mobile phone they register in the system doesn’t need to be their own, so long as they can be reached through that number. When asked about the lack of language support for languages outside of Chinese, Minister of Health and Welfare Chen Shih-chung stated that foreigners can ask friends or their local lizhang for assistance but that he will consult with Audrey Tang regarding language support for other languages.

Testing is undergoing for imported cases to see what genetic variants they have, but processing takes longer. The Lambda variant has not been detected from any imported cases yet.

Two groups have launched a recall campaign of Wanhua legislator Freddy Lim, hoping to leverage on accusations against Lim that he is not frequently present in the neighborhood. Both groups are linked to the pan-Blue camp, with one led by local city councilor Zhong Xiaoping, who may be hoping to take Lim’s legislator seat.

616 have tested negative after being tested in connection to a New Taipei bus driver that caught COVID-19 from his son. According to the Apple Daily, New Taipei only reported two new cases today, but they were found in quarantine, meaning that there were no cases that were not detected outside of quarantine today. 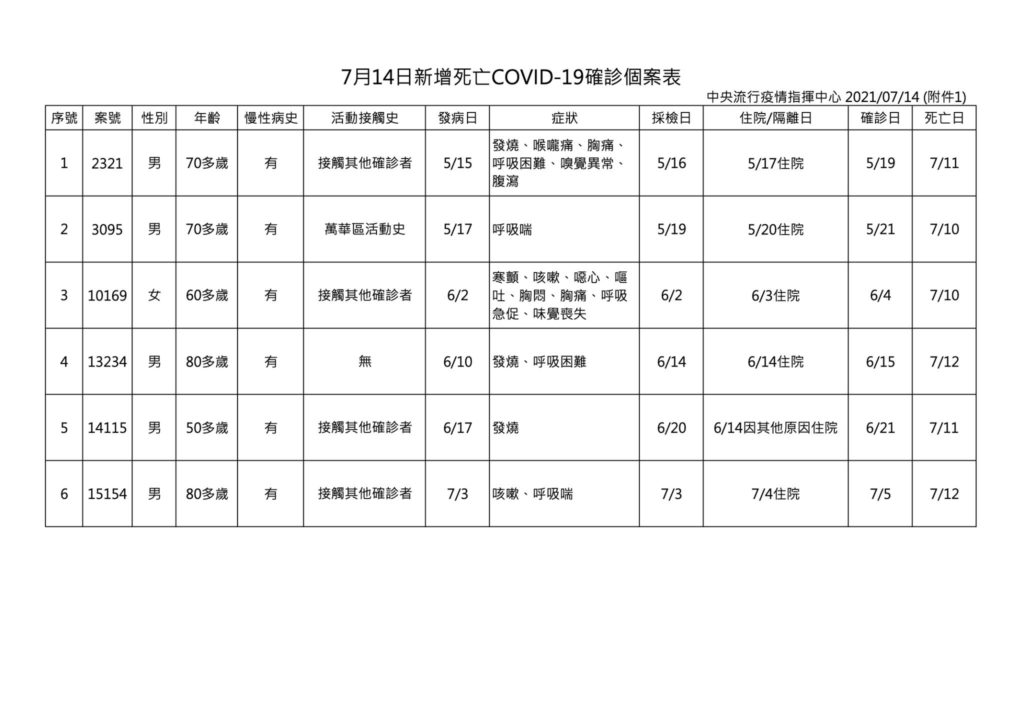 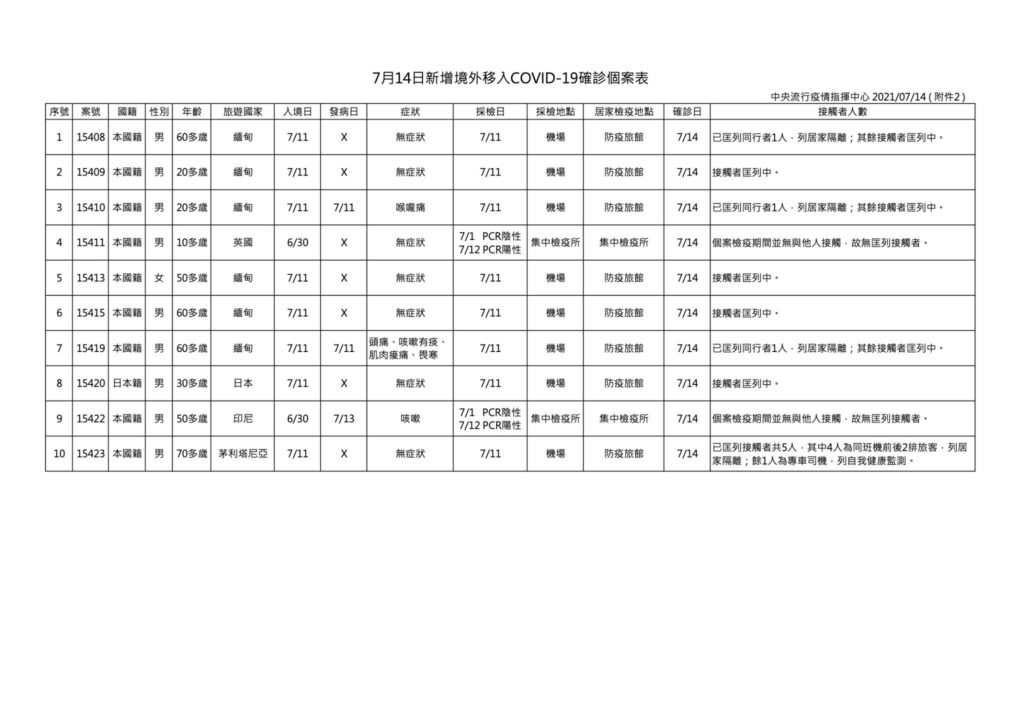 Information on the deaths from today (left) and the imported cases from today (right). Photo credit: Ministry of Health and Welfare/Facebook

Taipei is carrying out large-scale vaccinations in the Taipei Expo Center.

Foreigners who entered Taiwan before March 21st, 2020 have been given another thirty-day visa extension.

TSMC is allowing for remote work, due to three cases among workers in Hsinchu.

Traffic was up to 10% on the Taipei MRT yesterday, on the first day of the relaxation of some level three measures. At the same time, low attendance was reported in movie theaters and gyms that have been reopened.

New Taipei mayor Hou You-yi touted today as marking a success in efforts to fight COVID-19. According to Hou, Rt for New Taipei is 0.4 and Rt has been lower than 1 for the past month. The NPI is 93%.

Taipei mayor Ko Wen-je stated that today’s cases were divided between five administrative districts but that cases were primarily household infections. There are only two cases of unknown infection per day. As such, Ko believes that the number of cases in the community is low. Ko sought to defend Taipei’s record of contact tracing, stating that Taipei focuses on individual case histories and not statistics. The Taipei city government announced a rent reduction for businesses renting properties from the government of 75% for three months, adding to existing measures for restaurants. Rent for individuals renting public housing is reduced by 30%.

Ko otherwise asserted that Taiwan would likely see an explosion of cases if it opened up again too fast and so called for slowly opening up day-by-day. Ko expressed the belief that Taiwan would have ample vaccines by October, but that Taiwan needed to hang on until then. Cooperation between the CECC and the Taipei government for the TAPMC and Huannan Market cluster ended on July 10th, representing that the cluster seems to be under control. Ko downplayed the severity of the clusters, claiming that they were different from the Miaoli cluster among factory workers.

The CECC still takes the view that there is insufficient data on mixing vaccines and is evaluating the possibility of requiring third dose vaccinations.

Flu vaccinations will still be carried out in the fall, though how this is to be carried out will be different from how COVID-19 vaccines are carried because this will prioritize children and the elderly. Vaccination is expected in October, with plans to vaccinate more than 50% of the elderly.

Medigen has responded to online rumors from a Facebook page claiming to be a purported whistleblower that allege low efficacy against new variants of COVID-19, threatening to file charges. It is likely Medigen will have to deal with more incidents of disinformation and misinformation about its vaccine going forward. 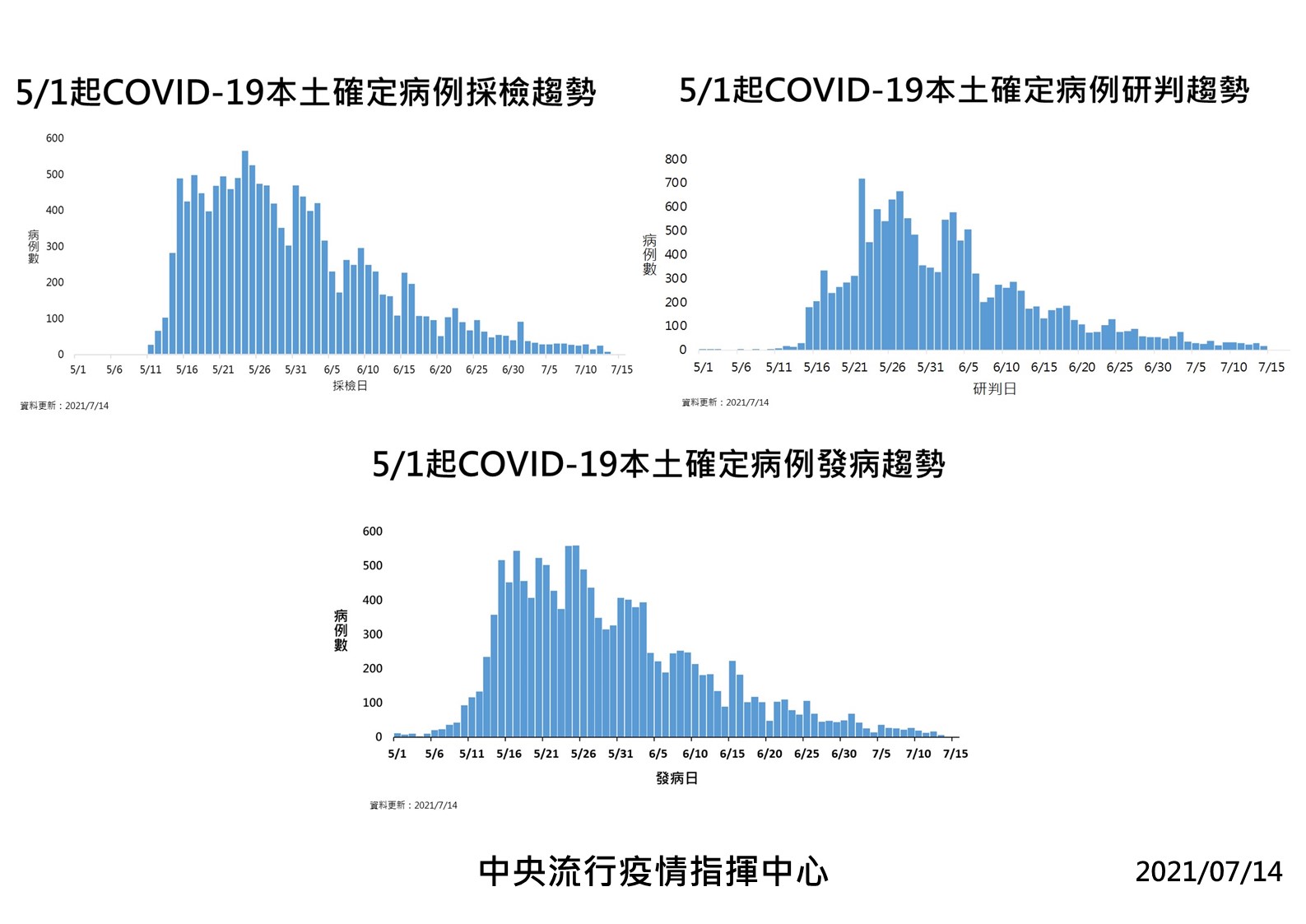 The CECC still requires proof of authorization from the original manufacturer for vaccine purchases by non-government groups. Minister of Health and Welfare Chen Shih-chung stated that Taiwan should currently have enough vaccines, but that the question now is when they will arrive.

The CECC is hoping to achieve a certain rate of vaccination by the fall, when schools reopen, though it has not set a specific percentage that needs to be reached. Likewise, the CECC stated that the rate of death during the peak period of the outbreak is not worse than other countries, with Taiwan still having a comparatively low rate of death.

Reports suggest 550,000 AstraZeneca vaccines and 350,000 Moderna vaccines are set to arrive in Taiwan tomorrow afternoon. The CECC neither confirmed nor denied such reports today, however. Nevertheless, it is known that 970,000 vaccines donated by Japan are set to arrive tomorrow.