23 DOMESTIC CASES and one imported case were announced at the Central Epidemic Command Center’s (CECC) daily press conference today. Nine of these cases were already in quarantine. One death was also announced. Ten cases were in New Taipei, nine cases in Taipei, and one case each in Keelung, Hsinchu, Taoyuan, and Taichung. 84.5% of cases to date have been released from quarantine.

According to Minister of Health and Welfare Chen Shih-chung, there are generally around twenty to thirty cases per day, with cases expected to decline without mass gatherings. When asked if the case in Hsinchu was from a worker at TSMC, the CECC responded that it had faith in Hsinchu to deal with COVID-19 cases there.

Those above 50 and individuals between 19 and 64 with underlying conditions can register for vaccination on Audrey Tang’s online vaccination registration system. The deadline for being included in the next wave of AstraZeneca vaccination is 5 PM. 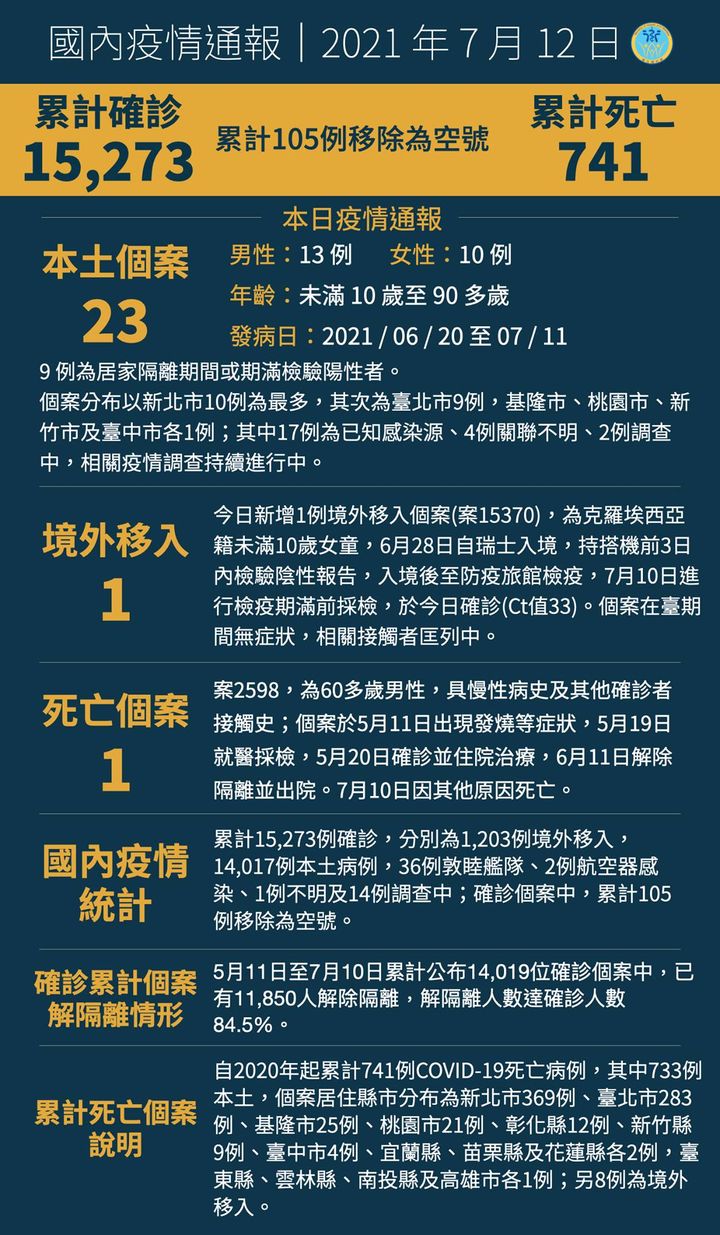 There are expected to only be AstraZeneca vaccines available for the next three weeks, due to the fact that vaccination for those above 60 years old is very fast currently. 137,629 changed their vaccine registration to be willing to be vaccinated with AstraZeneca after the CECC press conference yesterday.

Pilots, individuals between 19 and 64 with high-risk conditions, and pregnant women, can now be vaccinated using Moderna with at least 28 days between doses,  whereas ten to twelve weeks were previously required. The CECC stressed that this is safe. Mixed vaccinations are still not allowed. Taipei mayor Ko Wen-je has called for mixed vaccinations to speed up the rate of vaccination.

180,000 vaccinations have been conducted over the weekend. 190,000 were second dose vaccinations, while 180,000 were Moderna vaccinations. 14.87% of the population has been vaccinated with at least one dose.

With claims in the media that greater Taipei is receiving fewer vaccines because of the CECC retaining vaccines, the CECC stated that it will clarify the situation.

The CECC was asked about the vaccine donation from Japan on June 4th, with some accusations in the media that these were vaccines manufactured in India that were redistributed in India, probably with the view that such vaccines are lower quality. According to the CECC, these vaccines came from the US and were redistributed in Japan, and that vaccines underwent safety checks before being shipped.

The CECC stated that students needing vaccinations to attend school abroad would not be blocked from vaccination. Moderna vaccines will be reserved for individuals that cannot be vaccinated with AstraZeneca. If some groups can only use some vaccines and not others, due to underlying conditions, vaccines will be reserved for them. In particular, one notes that the news narrative of BioNTech as being the only vaccine that can be used to vaccinate individuals between 0 and 18 is on the rise.

The yellow card given at the time of vaccination can be used for proof of vaccination, with further data to be provided online. As with before, if a doctor believes that a COVID-19 test is needed, this will be paid for by the government, while other tests are self-paid, or if someone needs to be tested for travel.

The Taipei city government has been criticized for not holding a press conference providing updates on the COVID-19 situation yesterday by Taipei city councilor Sabrina Lim and others. As a result, contact tracing information for new cases in Taipei was not announced. The Taipei city government has stated that it uploads contact tracing information online instead of announcing it at daily press conference to save time.

The Chinese Professional Baseball League (CPBL) will resume games tomorrow, though games will not be open to the public. CPBL games have been suspended for two months.

Over 7,000 gathered at the Xingda Port market in Kaohsiung over the weekend, with 90 stalls opened. Consequently, the market was ordered to be closed today for disinfection, while crowd control measures that were relaxed will again be implemented. Disinfection will also take place tomorrow. 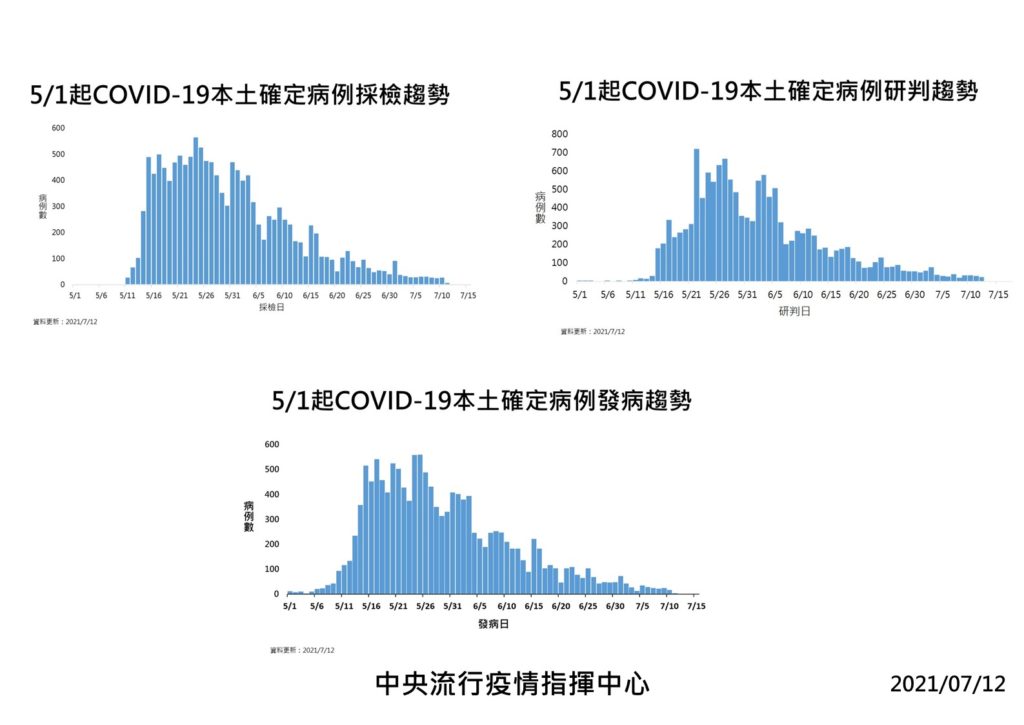 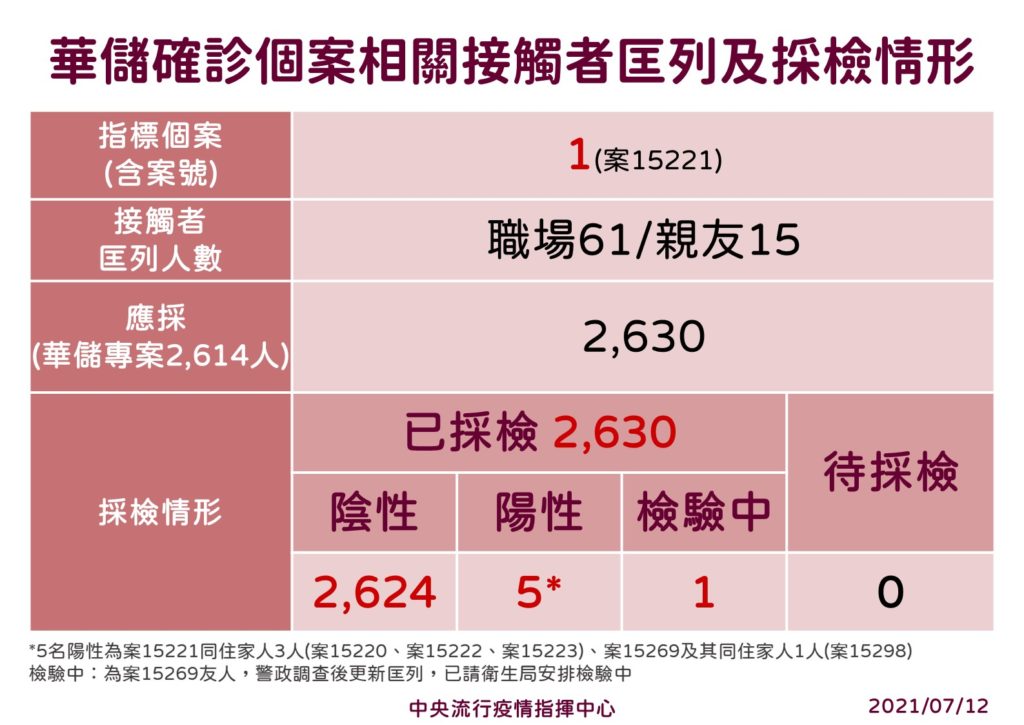 Further data released by the CECC (left) and testing information on the China Airlines transportation worker. Photo credit: Ministry of Health and Welfare/Facebook

A police officer in Chiayi has undergone surgery after reports of blood clots following vaccination with AstraZeneca.

Markets in Kenting are expected to reopen on July 16th, though indoor dining will still not be allowed.

In a notable act of discrimination, Ko also claimed that “gay groups” were particularly prone to household infections that led to the spread of COVID-19.

A cluster infection of seven has been linked to rental apartments in Xinyi, divided between two apartments. The Taipei city government has been criticized by local lizhang for not revealing more information about the contact tracing information for these cases, leading to some worries.

Public kindergartens in Taipei are expected to reopen on July 19th. Most kindergarten teachers are expected to have been vaccinated by then. At the same time, concerns have been raised about the possibility of COVID-19 spreading at kindergartens. Childcare facilities are also to reopen on July 20th, but must implement divided shifts and are restricted to 50% capacity. While theaters are also to reopen, disinfections must be carried out between screenings, it is hoped that tickets are purchased ahead of time, and mask-wearing, social distancing, and QR code contact tracing must be carried out. As New Taipei is not opening up movie theaters, it is possible that New Taipei residents may travel to Taipei to watch movies.

Tourists have begun traveling to tourist sites in Nantou in anticipation of COVID-19 measures being relaxed tomorrow. This is particularly the case around Hehuanshan, with the Wuling observation deck set to reopen tomorrow.

The CECC will discuss with the Ministry of Transportation and Communications about how to facilitate tour groups under COVID-19 conditions.

New Taipei will begin providing meals to children and teenagers between 0 and 18, particularly those between 0 and 6, at convenience stores such as 7/11, FamilyMart, OKMart, Hi-Life, and dumpling/potsticker chain Bafang Yunji.

There are increasing reports in the media connecting magnetism with being vaccinated with Moderna, following a journalist question about the matter at the CECC press conference yesterday that claimed similar incidents in Malaysia have taken place. It is to be seen if this deters individuals from being vaccinated.

According to Taipei mayor Ko Wen-je, today is the first time there has been less than ten cases in Taipei in two months, with nine cases reported today, though Wanhua still has a larger proportion of cases. Likewise, there are some household clusters in Xinyi. From July 1st to July 10th, there were only 36 cases that were of unclear origin, or 17.6% of cases, with most other cases being household infections. The Taipei city government has stated that cooperation with the central government is going more smoothly currently.

TSMC, FoxConn, and Shanghai Fosun have announced that they have signed a deal for the purchase of 10 million BioNTech vaccines, which are to be donated to the government, and to be shipped directly from Germany. The deal cost upward of 175 million USD and vaccines will be between 31 and 34 USD per dose. Some reports in the media have attempted to criticize the CECC, with the suggestion that the price negotiated by TSMC and FoxConn is lower than the price negotiated by the CECC. 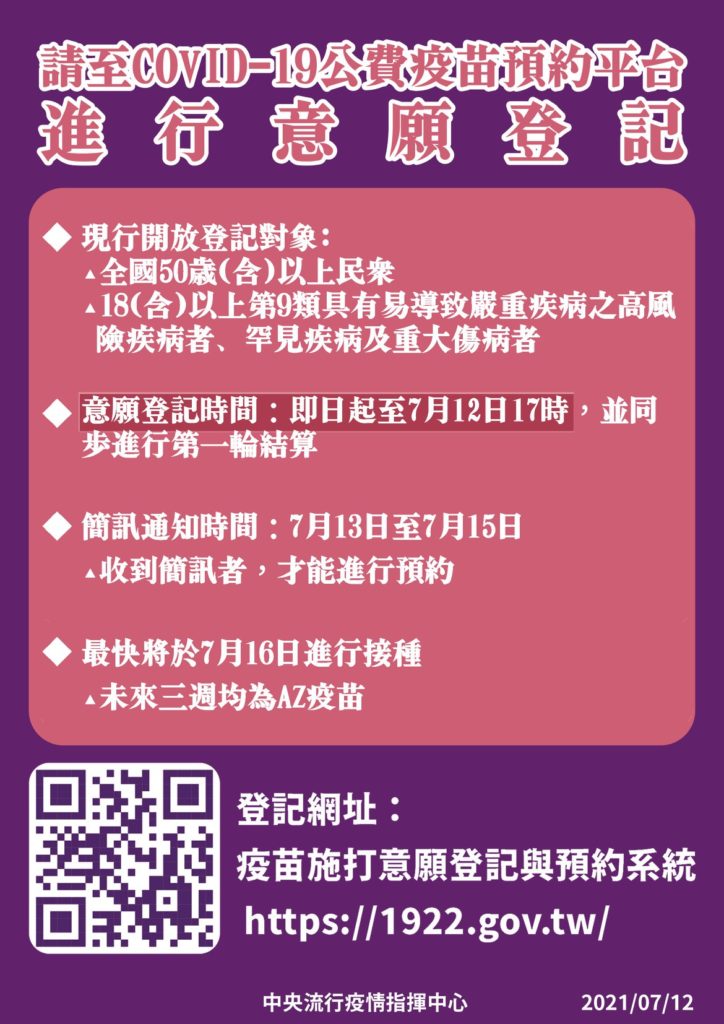 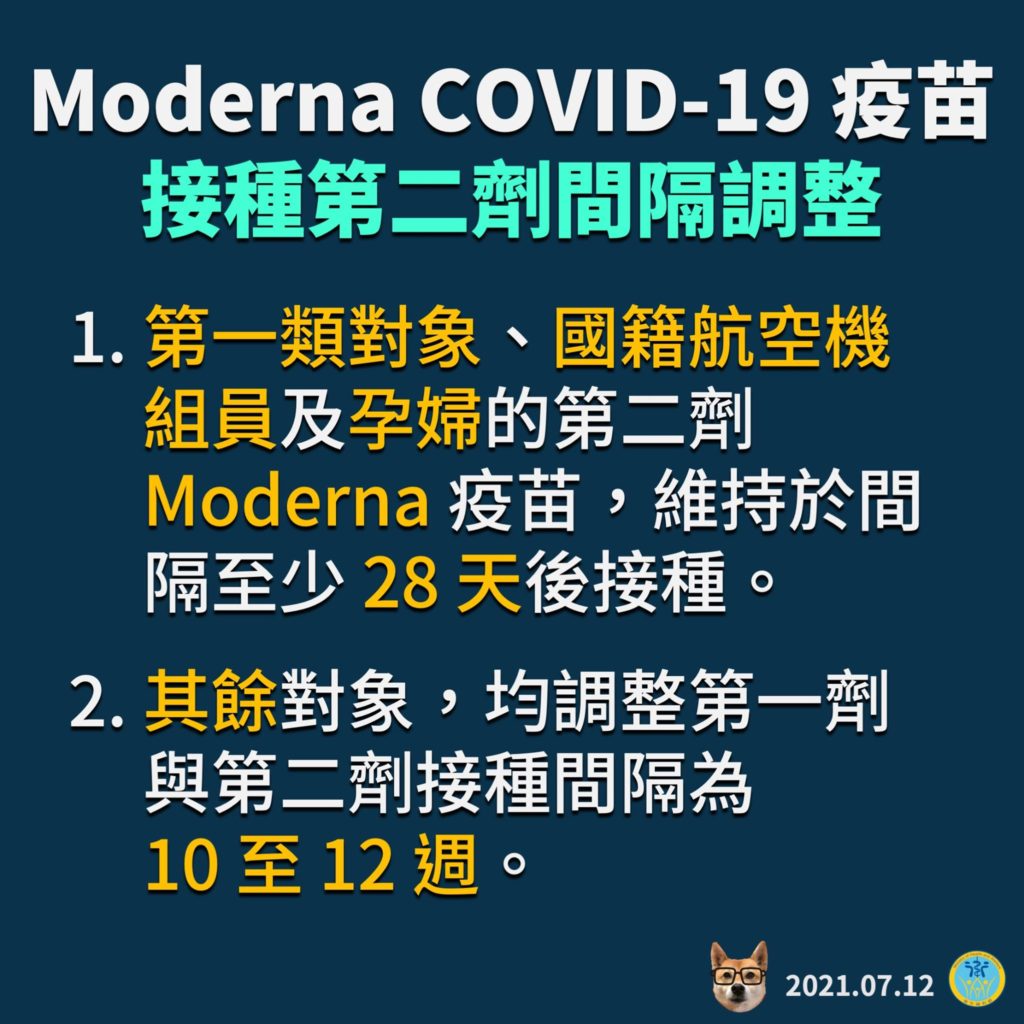 Information on shifts in vaccination policy. Photo credit: Ministry of Health and Welfare/Facebook

The CECC thanked non-government groups for assisting in vaccine purchases today, though it still hoped for a clearer schedule on when vaccines would be distributed, and will work with Audrey Tang to ensure that members of the public have access to their choice of vaccine through the vaccine registration system. The CECC was also asked about President Tsai Ing-wen’s choice of vaccine, responding that Tsai’s choice of vaccine was up to her.

Nevertheless, according to the Apple Daily, Chinese state-run media outlet Xinhua published screenshots of the draft contract with BioNTech and Fosun beforehand before TSMC and Hon Hai publicized the agreement, raising concerns about leaks in the vaccine acquisition process. It is also not impossible that the Chinese government decides to interfere in the vaccine purchase at the last minute. Notably, a China Times journalist asked Chen Shih-chung during the press conference today if he should thank China for not interfering in the vaccine purchase today.