76 DOMESTIC CASES, four imported cases were announced by the Central Epidemic Command Center at its daily press conference today. 14 of these cases were already in quarantine. 48 cases were in Taipei, while there were 24 cases in New Taipei. There were three cases in Taoyuan and one case in Hsinchu City. 77.3% of cases to date have been released from quarantine.

The Taipei city government announced five new cases from the cluster at the Taipei Agricultural Products Marketing Corporation (TAPMC) and Huannan Market today after 3,140 PCR tests from yesterday were processed. The First Fruit and Vegetable Market has 88 cases total, while there are 21 cases in the Second Fruit and Vegetable Market, both of which are part of TAPMC. There are 111 cases at the Huannan Market. 80,000 text messages have been sent to individuals that were in the area around the Huannan Market between June 8th and July 1st.

183 have been quarantined in connection to the Huannan Market. 2,600 tested resulted in six positive cases, while three were older cases. 340 tests are still being processed. There is particular concern about strengthening measures at the Second Fruit and Vegetable Market. 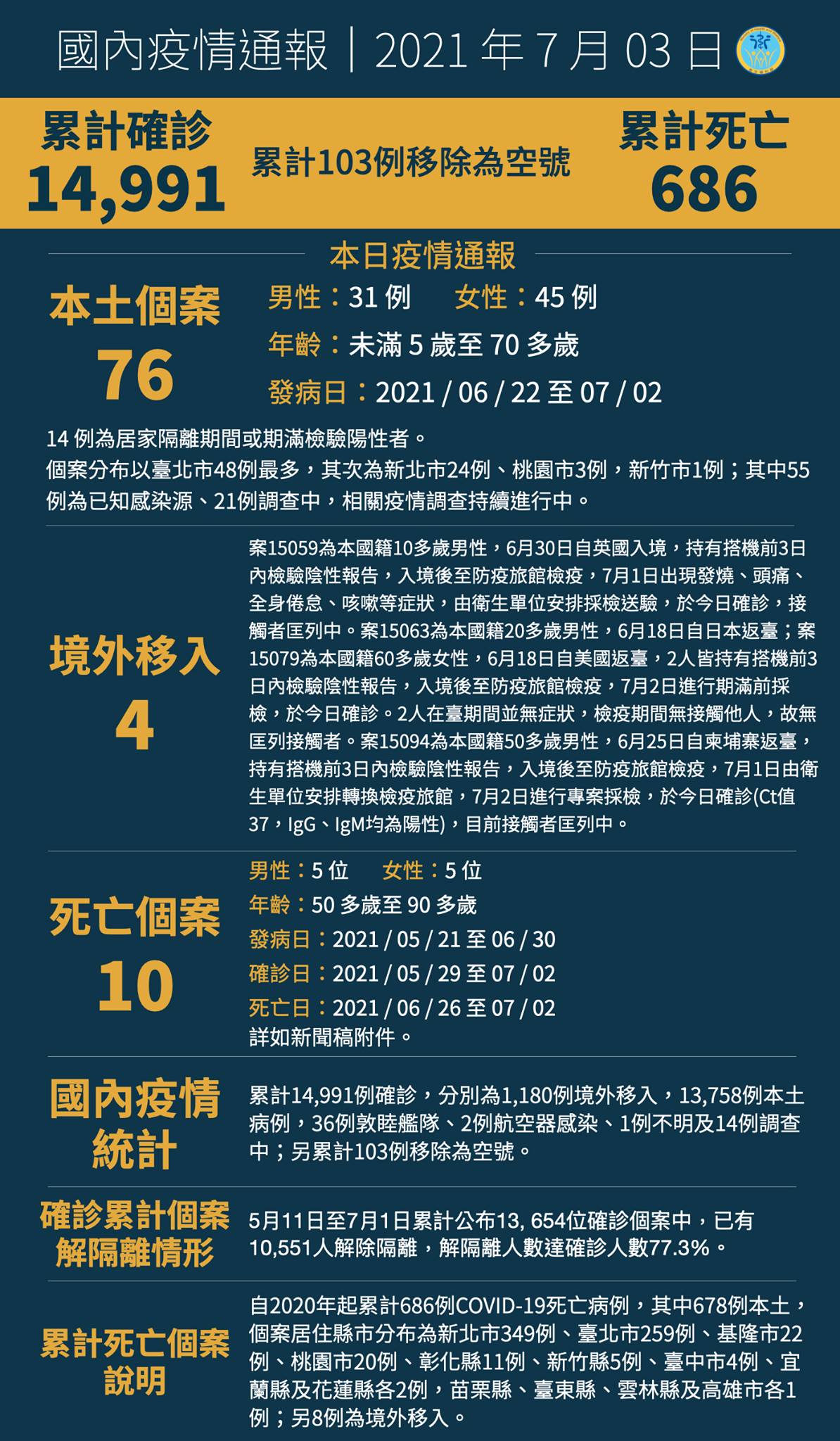 Of the 41 cases announced yesterday linked to the Huannan Market, one was an old case. Of the remaining 40, 27 were asymptomatic. According to the CECC, none were hospitalized and these cases were sent to quarantine facilities and hotels, though some of the cases above 50 may be treated with antibody medication in hospitals when needed. By contrast, Taipei mayor Ko Wen-je seemed to indicate in his press conference today that some cases have been sent to hospitals.

The Huannan Market will be closed for three days. When asked if this could be extended, Chen stated that this will depend on the situation. Another round of general testing will be carried out for the market on July 8th.

No cases of the Delta variant have been detected in the greater Taipei area so far.

According to Minister of Health and Welfare Chen Shih-chung, the cases at the Huannan Market cluster are evenly divided between Taipei and New Taipei. Chen emphasized that today had fewer cases in cities and counties than before, while when you subtract the cases already in quarantine and that areas of Taipei outside of the three markets show low cases, the situation seems to be under control.

Nonetheless, Taipei mayor Ko Wen-je has stated that he believes that it will only be clear on July 15th as to whether the measures taken to address the Huannan Market cluster will be effective and has stated that he believes that “half-lifting” lockdown will still ban indoor dining. Ko also claimed today that he did not know if today’s numbers announced by the CECC included cases linked to the Huannan Market or not, though one has reason to be skeptical of this claim, seeing as New Taipei mayor Hou You-yi knew the number of cases in New Taipei linked to the Huannan Market.

Ko cited the spread of cases from family gatherings and called on families not to eat together or talk together, as well as to stagger when they eat meals. Taipei city will now allow appointments for vaccinations to be canceled within a certain window, though individuals will be required to go in for vaccination to prevent waste. Taipei will treat bottles of Moderna as having thirteen doses, with a potential extra dose. Ko also stated that Taipei traffic has increased.

Taipei city defended Department of Health head Huang Shi-jie taking the month off in the wake of scandals about violation of vaccine priority order at Taipei clinics, but stated that Huang is welcome to come back and attend important meetings.

There were no new cases from Pingtung reported today. 490 have been quarantined in connection with the Fangliao Hospital in Pingtung, with 3,701 tested in connection with the Fangliao Hospital cluster. 3,473 cases have been found to be negative so far, while the rest are being processed. A positive case is the spouse of a previously confirmed case.

Five consecutive days of testing more than 2,000 per day at neighborhood test sites in Pingtung have found no positive tests. This shows that the situation in Pingtung seems to be stable, with monitoring of existing cases ongoing until July 11th.

There are 207 testing sites nationwide and the daily capacity for tests is 72,651, with maximum capacity being 124,022 tests. The rate of infection at testing sites seems to suggest that testing is sufficient. 30,000 tests are usually carried out per day, which decreases to 20,000 on weekdays. Test processing is similar. 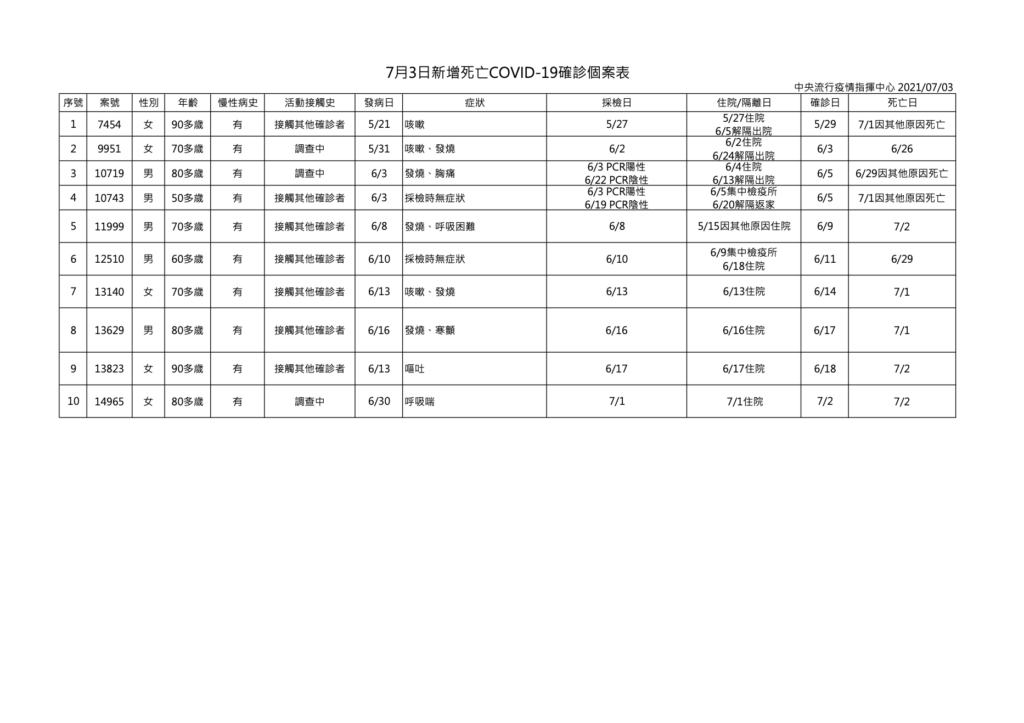 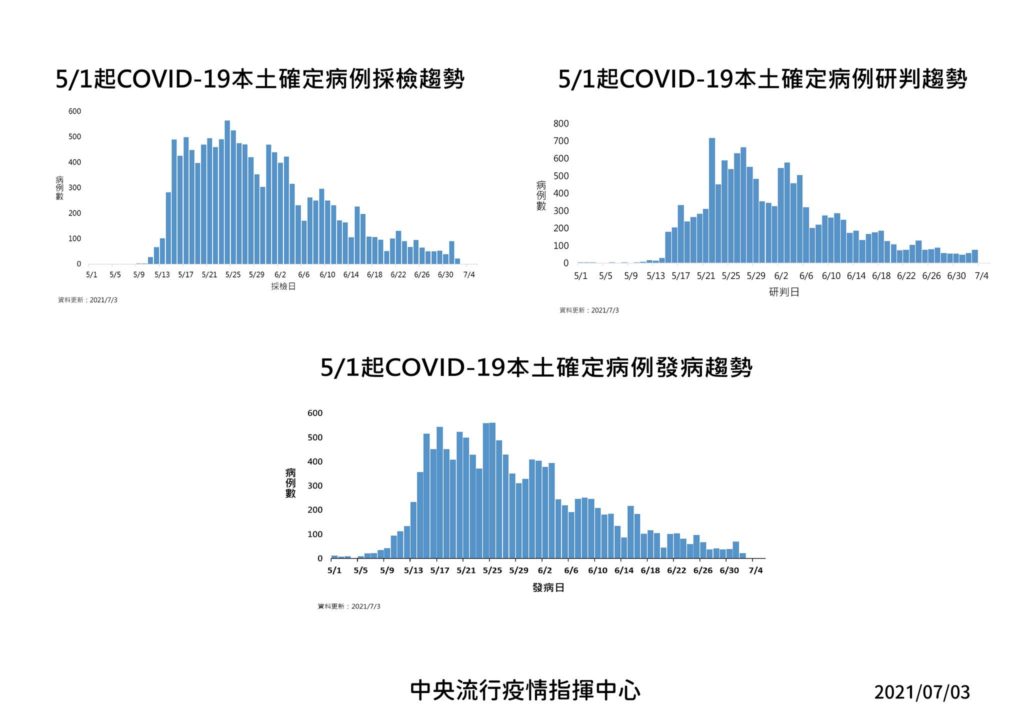 Taipei city councilor Meredith Huang announced that workers at the Taipei Performing Arts Center (TPAC) were made to come into work before disinfection took place due to a cluster there, with 77 entering the building on the 28th and 56 people on the 29th. As a result, TPAC has been criticized for continuing to make workers come to work in spite of the possibility that this would lead to the further spread of COVID-19 in the building. 40 to date have been infected with COVID-19 at the TPAC. When asked today about the cluster, Taipei stressed disinfection measures for the facility.

Freddy Lim was publicly criticized at a press conference on the Huannan Market cluster by the head of the market, who accused Lim of having never visited the market and not sticking up for local issues in Wanhua. Lim’s wife Doris later responded on Facebook, pointing to how Lim’s legislative office had coordinated with lizhang to ensure the distribution of medical supplies, and criticized city government officials for misleading statements about Wanhua. Lim also criticized Ko during the same press conference.

With plans to vaccinate individuals necessary for the stable functioning of the nation in the next wave of vaccination, this will include teachers below the high school level. Teachers can be vaccinated at their place of residence to avoid unnecessary travel, since some may have household registrations that are different from where they actually live.

Relevant agencies will need to provide lists of personnel crucial to maintaining the stable operations of the nation, since they have a clearer sense of who may need to be vaccinated. The CECC also reviewed criteria for labeling deaths in connection with COVID-19, stressing that different countries have different criteria regarding such categorization. Discussion is also ongoing about how to provide proof of negative tests or of vaccination, seeing as workers in distribution markets will require this before being allowed to enter the workplace.

39 entered from high-risk countries and were directly sent to quarantine facilities for testing. One was sent directly to the hospital due to fever. Otherwise, the CECC stressed that the personnel allocated for testing and directing those that entered was sufficient, and that this process is expected to become smoother as time goes on. Videos are used to show what passengers should do before they disembark. Currently, 45 to 50 passengers can be taken care of in half an hour and thirteen new testing windows will be set up in the next week.

Whether a planned recall vote against Chen Po-wei of the Taiwan Statebuilding Party can take place on August 28th will depend on the COVID-19 situation then. The Central Election Commission has authority over whether the recall vote takes place as planned.

DOZO, the well-known izakaya in the East District, will shut down due to business having been affected by the current outbreak.

The United Daily News and the Apple Daily have begun reporting on a case of an 85-year-old man that died after being vaccinated with the Moderna vaccine. There has been an uptick in vaccinations because of a wave of Moderna vaccines being distributed to local governments, as some members of the public fear that the AstraZeneca vaccines cause sudden deaths. It is to be seen whether there start to be similar fears about Moderna as a result of such reporting, however.

With some night markets having reopened, there continue to be concerns that this could lead to gatherings that spread COVID-19. Taipei mayor Ko Wen-je notably visited Ningxia night market on Thursday, which reopened this week, as a show of support. Plans currently call for vendors to be quarantined based on proximity to confirmed COVID-19 cases, in the event of infections.

Vaccinations may be considered for family members of medical personnel, but the CECC currently still primarily hopes to vaccinate based on age group in the future. 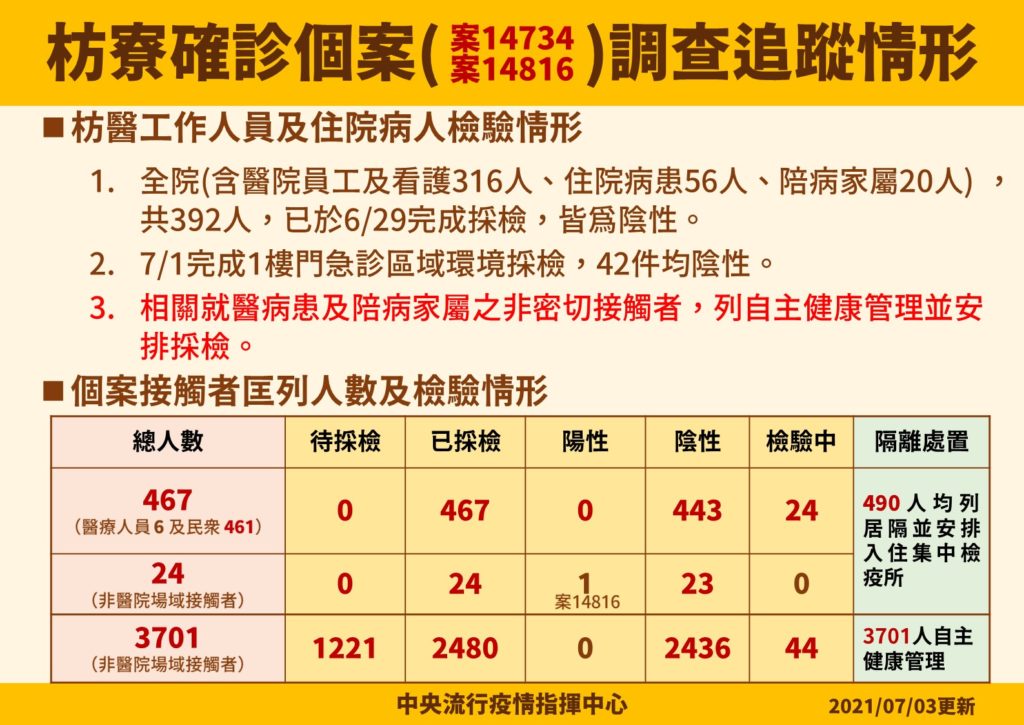 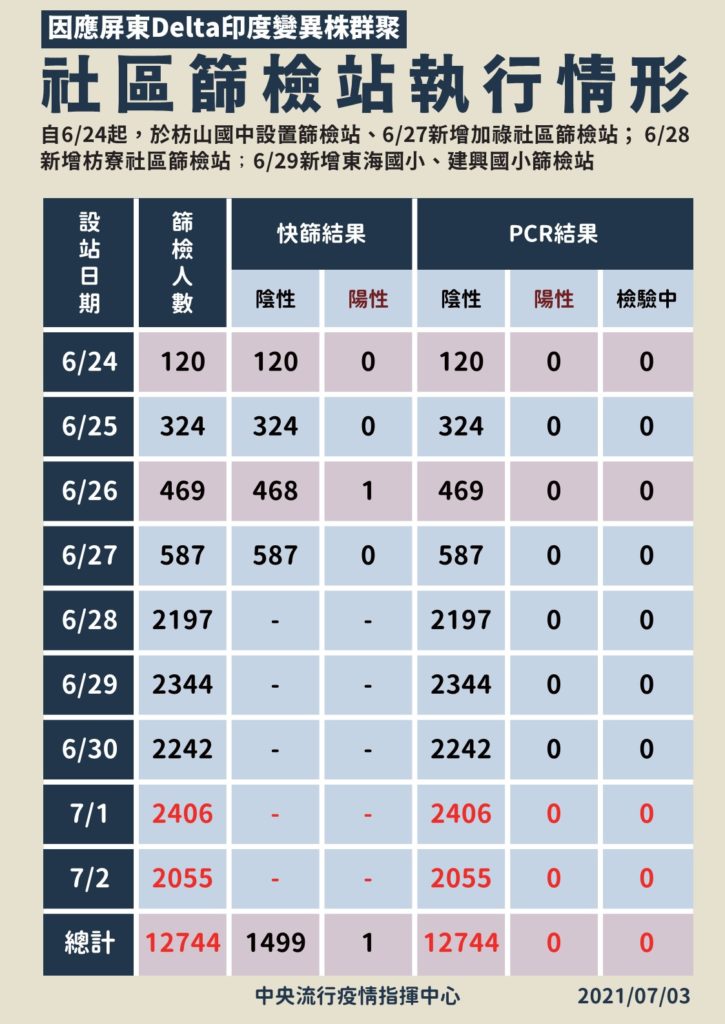 Xiamen, China, continues to claim that individuals with negative test results that arrived from Taiwan later found to be positive, having reported more cases between June 25th and June 30th.

Reuters reports that TSMC and FoxConn have reached a deal through Fosun with BioNTech to purchase five million vaccines each. According to the report, the German government pushed BioNTech to sell to Taiwan, hoping to avoid the appearance of having caved in to Chinese pressure not to sell vaccines to Taiwan. It is to be seen if there is interference from the Chinese government or if these are viewed as vaccines not from the original manufacturer. With regards to purchases of vaccines by other non-government groups, Chen Shih-chung stated that a letter of authorization from the original manufacturer will still be required for purchase.

When asked if lives could have been saved if the central government had allowed for purchases by non-government groups, New Taipei mayor Hou You-yi stressed cooperation between the government and non-government groups during his press conference today. Taipei mayor Ko Wen-je stated that he believes that the BioNTech vaccine could be used to vaccinate individuals between 12 and 18, based on international use of the vaccine, though he otherwise stated that he does not view young people as a group in particular need of vaccination, due to low rates of COVID-19 infection.

The KMT magistrates of Nantou, Hualien, Yunlin, and Taitung counties, along with KMT chair Johnny Chiang, have called on the Tsai administration to allow local governments to purchase vaccines. It is likely that they will use TSMC and FoxConn’s success as leverage in their push to be allowed to purchase vaccines. Yet with the KMT increasingly open to calling for the import of Chinese vaccines, it is probable that some pan-Blue local governments will call for the importation of Chinese vaccines.