In order to prevent protests from taking place, police occupied streets across Hong Kong. For the second consecutive year, Victoria Park, where July 1st demonstrations in Hong Kong normally start, was sealed off. Police primarily focused their presence on areas where protest is usually expected to take place yearly. 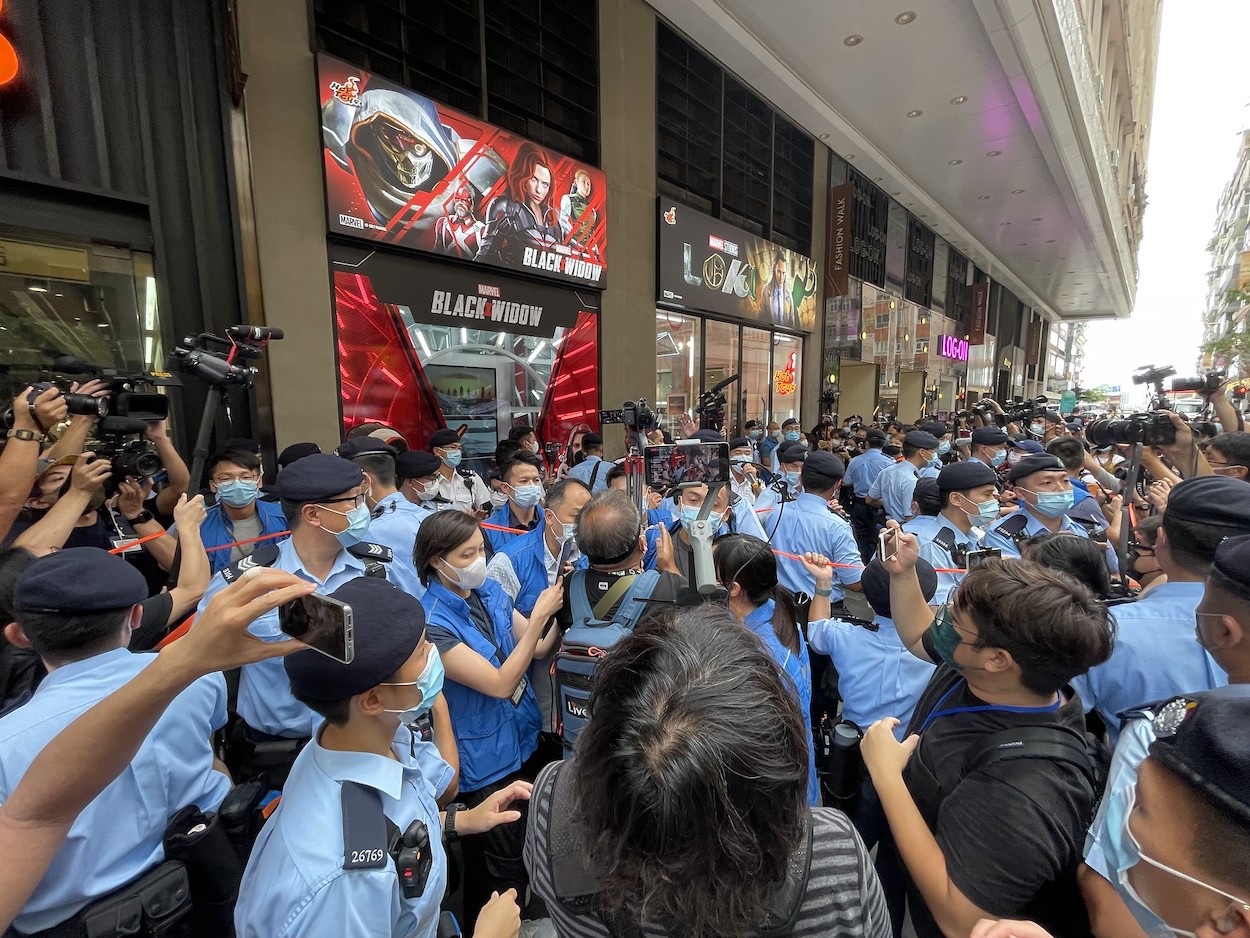 Though there were no large-scale protests in Hong Kong this year, some demonstrations did take place. In turn, they were cracked down on by police. A youth group, Student Politicism, tried to hand out fliers in Mong Kok, but were detained and removed by police. Three members were arrested, the group having handed out fliers in Mong Kok because it was prevented from setting up a street both in Causeway Bay, where it had originally planned to table. It was later reported that a fourth member of the group had been arrested. Police searched anyone entering Causeway Bay, while water cannon trucks were also deployed to patrol the area.

Larger, more established groups saw similar treatment from the police. Four members of the League of Social Democrats (LSD) planned to table in Causeway Bay. Though they were allowed to hold a short march toward the government flag raising ceremony at the Hong Kong Convention and Exhibition Centre, they were not allowed to set up a stall. Reporters were made to keep some distance away. 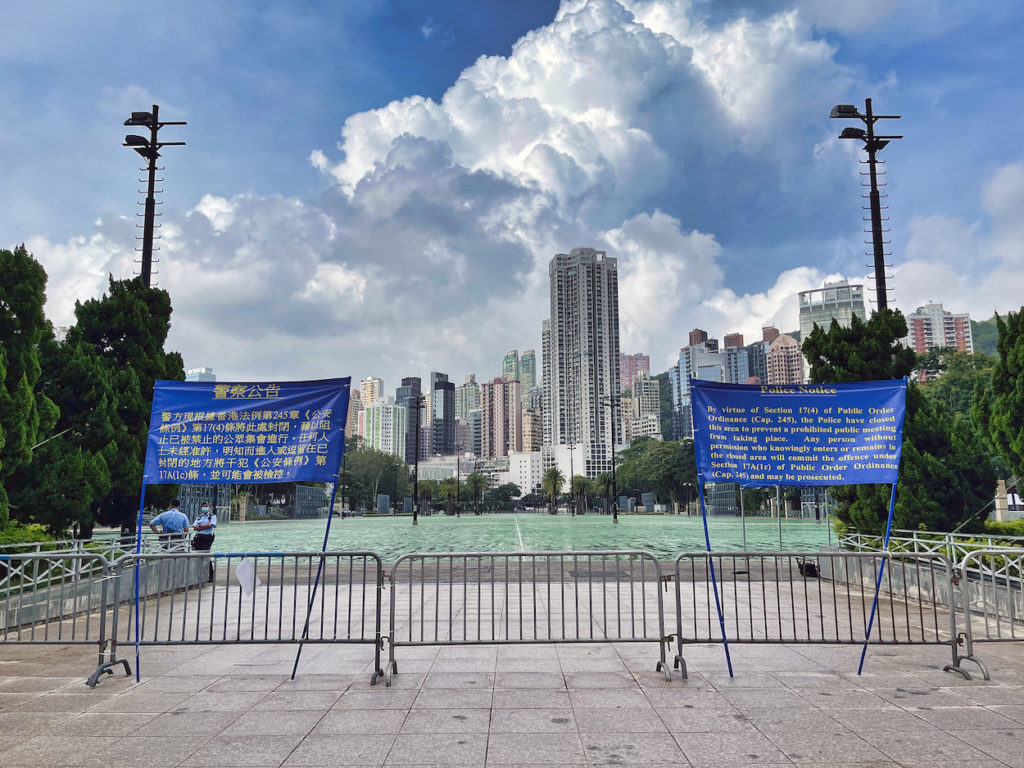 Eventually, they were only allowed to set up a stall at Canal Road, a significant distance away from where they had been planning on tabling. Apart from Student Politicism and the LSD, the Hong Kong Confederation of Trade Unions also planned to table in Causeway Bay and Mong Kok but was stopped by police. Union members were searched and their IDs recorded. Protest fixture “Grandma Wong” also made an appearance, but was taken away by police. Police were also filmed chasing after and arresting children.

Restrictions on public gatherings still are in effect in Hong Kong, with gatherings of more than four banned. Although the government has cited the need to prevent the spread of COVID-19, the Hong Kong government has also used COVID-19 as a pretext against protests. The protest march was banned ahead of time. The Civil Human Rights Front (CHRF), the organization that coordinates the annual demonstrations, previously announced that the demonstration this year was cancelled. Much of the CHRF’s leadership is currently in jail.

We are committed to peace. We seek commonalities and shelve differences across the #TaiwanStrait so that both sides can resume dialogue to avoid conflict. Only in this way can we pursue #Democracy, #Peace, and #Prosperity for the entire #ChineseNation.https://t.co/jB3F73WQZS

Now, the crackdown has expanded to the media sector. Hong Kong’s largest pro-democracy newspaper, the Apple Daily, shut down earlier this month after a police raid, the arrest of media executives, and freezing of its assets. Apart from the Apple Daily, public broadcaster RTHK has also seen legal actions targeting its journalists, shows cancelled, and the deletion of archives of old programs, while online media outlet Stand News has erased op-eds to prevent the targeting of its journalists and writers.

In the meantime, the 100th anniversary of the CCP’s founding was celebrated in opulence in China, with party cadres visiting Beijing to attend celebrations and a speech by Chinese president Xi Jinping. During the speech, Xi, who is seen as seeking to attain lifetime rule, dressed in a Mao suit in a throwback to Mao Zedong and vowed that anyone who stood in the way of China’s rise would suffer consequences. This included promising to “smash” efforts at Taiwanese independence.

As a #democratic, #free, #sovereign, and #independent country, #Taiwan is the consensus of the 23 million population. Taiwanese people will never accept the #CCP’s attempt to coerce Taiwan into accepting its claims or undermine the stability of the #TaiwanStrait and the region. pic.twitter.com/OOpB2hQl4f

The Tsai administration in Taiwan has stated that it will stand up against Chinese threats to its democracy. In the meantime, members of the pan-Blue camp including former KMT chair Hung Hsiu-chu, former vice president Lien Chan, and PFP chair James Soong congratulated the CCP on its 100th anniversary. The KMT as a party declined to congratulate the CCP, but still issued a statement on its English-language Twitter account that it “[sought] commonalities and shelve[s] differences across the Taiwan Straits” because of its view that this is the way to “#Democracy, #Peace, and #Prosperity for the entire #ChineseNation”. The KMT’s statement can be read as a de facto comment on the CCP’s 100th anniversary.

The statement can be seen as driving home the KMT’s continued pro-unification stance, then. The DPP posted several hours later on its Twitter account, “As a #democratic, #free, #sovereign, and #independent country, #Taiwan is the consensus of the 23 million population. Taiwanese people will never accept the #CCP’s attempt to coerce Taiwan into accepting its claims or undermine the stability of the #TaiwanStrait and the region.” It is probable the similar phrasing of the DPP’s comment was meant to clap back at the KMT’s statement.