54 DOMESTIC CASES of COVID-19 were announced by the Central Epidemic Command Center at its daily press conference today, along with eight deaths. This is again the lowest number of cases in Taiwan in a month, although Minister of Health and Welfare Chen Shih-chung stated that this could be due to lower testing over the weekend.

22 cases were in New Taipei and twenty cases were in Taipei. Otherwise, there were four cases each in Taoyuan and Hsinchu County, two cases in Changhua, and one case each in Keelung and Pingtung. 17 of the new cases from today were already in quarantine, while 75.1% of individuals quarantined to date have been released.

Companies with over 1,000 workers and government institutions with more than 100 workers have been asked to draw up lists for vaccination. This is to coordinate future plans for vaccination, this does not mean that these individuals will be vaccinated. 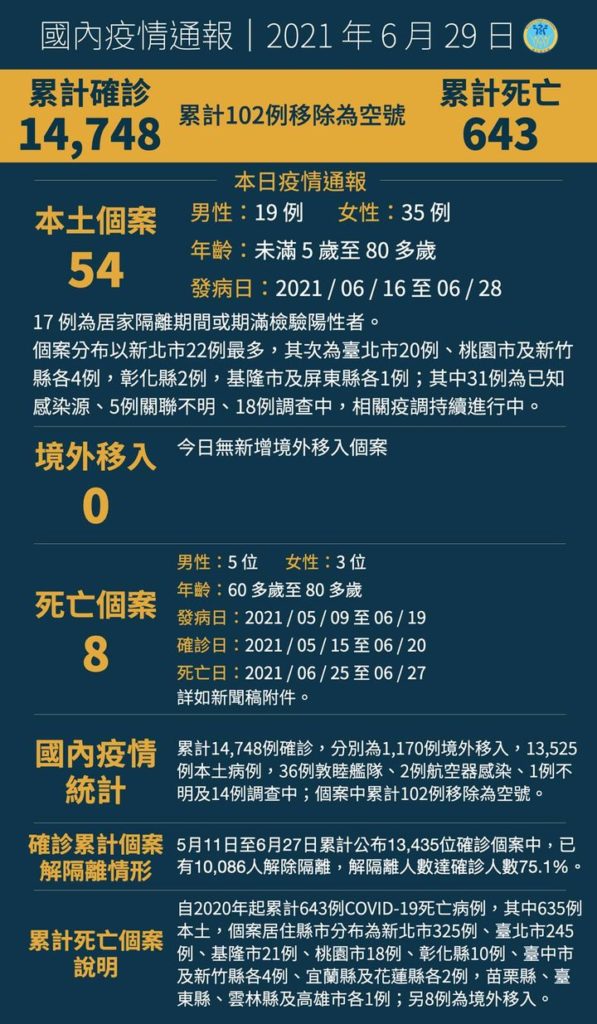 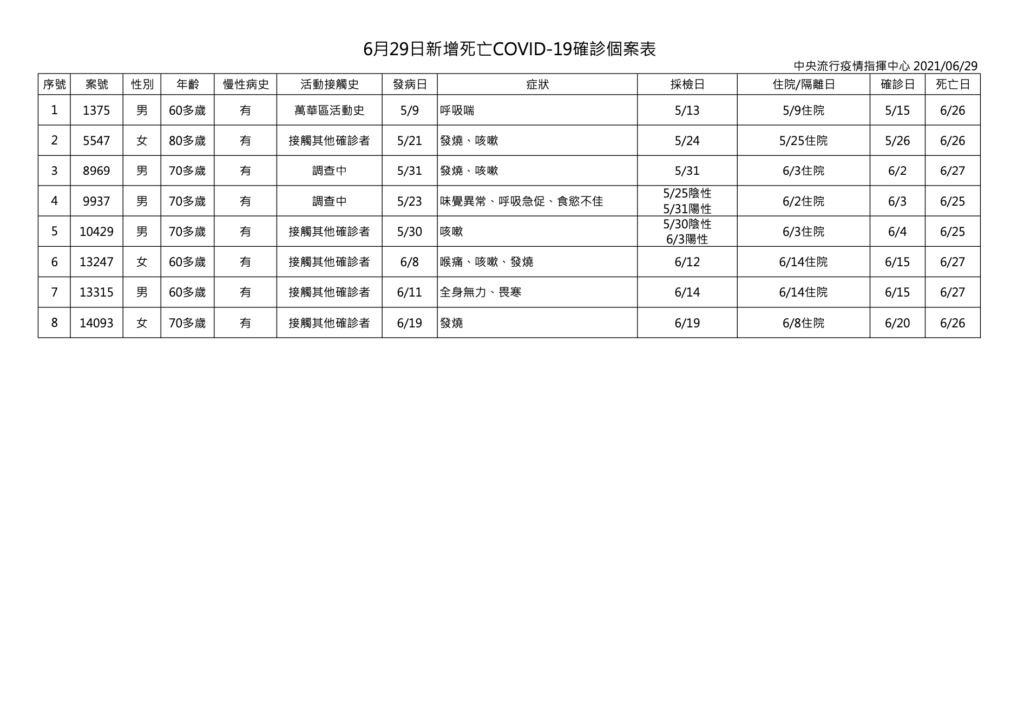 Infographic released by the CECC on the new cases today (left) and information on the deaths announced today (right). Photo credit: Ministry of Health and Welfare/Facebook

Likely due to privacy concerns, the CECC reiterated today that the text message contact tracing system used nationwide is only used for contact tracing purchases. Information is divided between local governments when requested for use.

There continue to be concerns about the spread of the Delta variant of COVID-19 in Pingtung. In particular, speculation continues to revolve around whether someone who stopped to have a conversation with one of the individuals in quarantine while throwing out the trash became infected through the conversation. If so, that would have taken place within one minute.

As a result of the Pingtung cluster, businesses in Fangshan Township, Pingtung have been ordered to suspend businesses for four days. Premier Su Tseng-chang has traveled to Fangshan to inspect efforts to fight COVID-19 there, and is expected to make a public report today. There has been difficulty in contact tracing one member of the Pingtung cluster who is currently unconscious, as a result of which contact tracing has only been able to be carried out using cell phone data.

While mangoes from Fangshan originally saw a decline in orders due to unfounded fears regarding produce potentially spreading COVID-19, orders have since rebounded. Apart from members of the public placing orders, as urged to do so by individuals such as former Minister of Culture Lung Ying-tai, banks such as the First Commercial Bank, Mega International Commercial Bank, and Taiwan Business Bank have placed orders.

A new case with the Delta variant was found in Pingtung today. Some cases are still being contact traced in connection to the cluster, with some hypotheses, but not a clear origin for how COVID-19 spread. 176 individuals in home quarantine have been tested, with 171 negative test results, and five still being processed. One case already left Taiwan, but they will be tested if they return, and those on the same plane have to date proved negative. Two cases in Tainan that some suspected might be linked turned out to be of the Alpha variant, so are not linked.

Similarly, with one of the Pingtung cases having visited the Fangliao Hospital, 400 contacts were listed. Testing is currently undergoing, with individuals having been put in quarantine facilities. 36 cases are negative, while one case has tested positive. The rest of the tests are still being processed.

2.197 were tested in Pingtung yesterday, a significant improvement from only testing several hundred people per day in the early stages of the cluster. 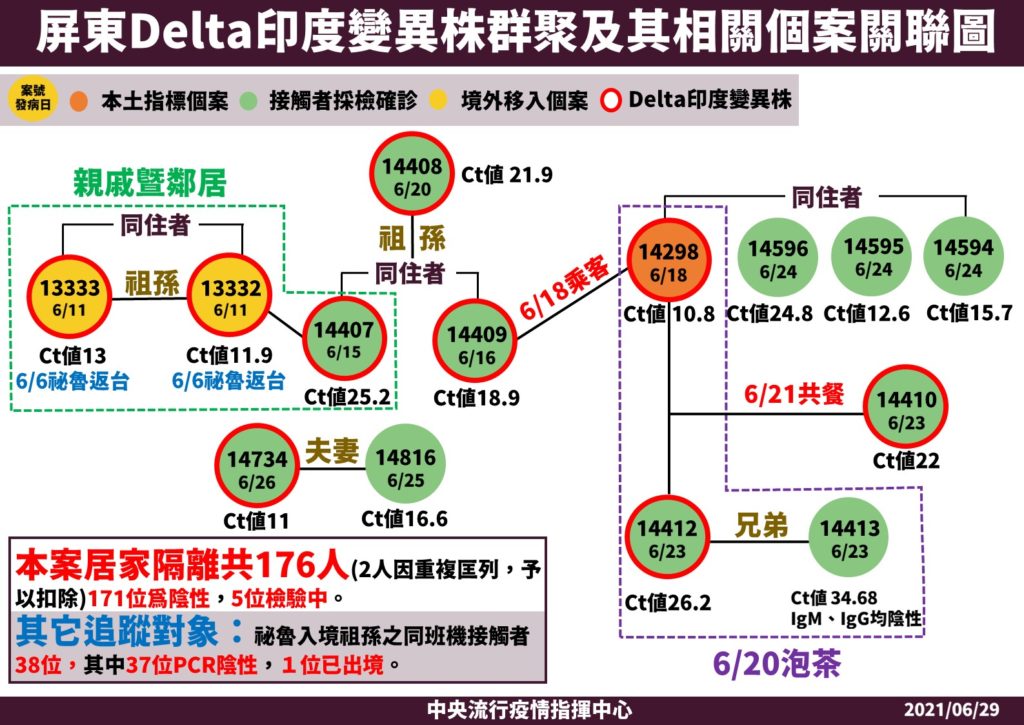 Most cases of COVID-19 continue to be among the elderly. After review of the one severe COVID-19 case of a child under nine years old to date, it was found not to fit the criteria for a severe case. Three cases among children have been classified as eligible for the use of remdesivir.

The next wave of distribution of 1,100,000 Moderna vaccines will prioritize individuals in long-term care facilities, and individuals who already have their first vaccine. 30% of the allocation from this wave is based on the number of individuals between 65 to 74 in each city.

High flow nasal cannula machines purchased through donations organized by entertainer Jia Yong-jie have begun to be used, with a patient in Keelung using the machine to assist with oxygen supply.

Former vice president Chen Jien-ren has reiterated in public comments that he believes that Taiwan must redouble efforts to obtain the largest amount of vaccine possible in order to prevent the spread of COVID-19.

Vaccinations continue to be down. According to Chen, 500,000 of 1,440,000 individuals above 75 have been vaccinated, due to fears of sudden deaths after vaccination leading to lower vaccination. This occurs, however, because 200 people over 70 die per day in Taiwan and this overlaps with elderly being vaccinated.

High-risk areas in which it is hard to find all transmission chains, such as in Pingtung or among TAPMC workers, may be vaccinated. This does not mean that any place with COVID-19 cases will be vaccinated, as was done with Taipei Agricultural Products Marketing Corporation (TAPMC) workers or residents of the two villages in Pingtung affected by the Delta variant cases. 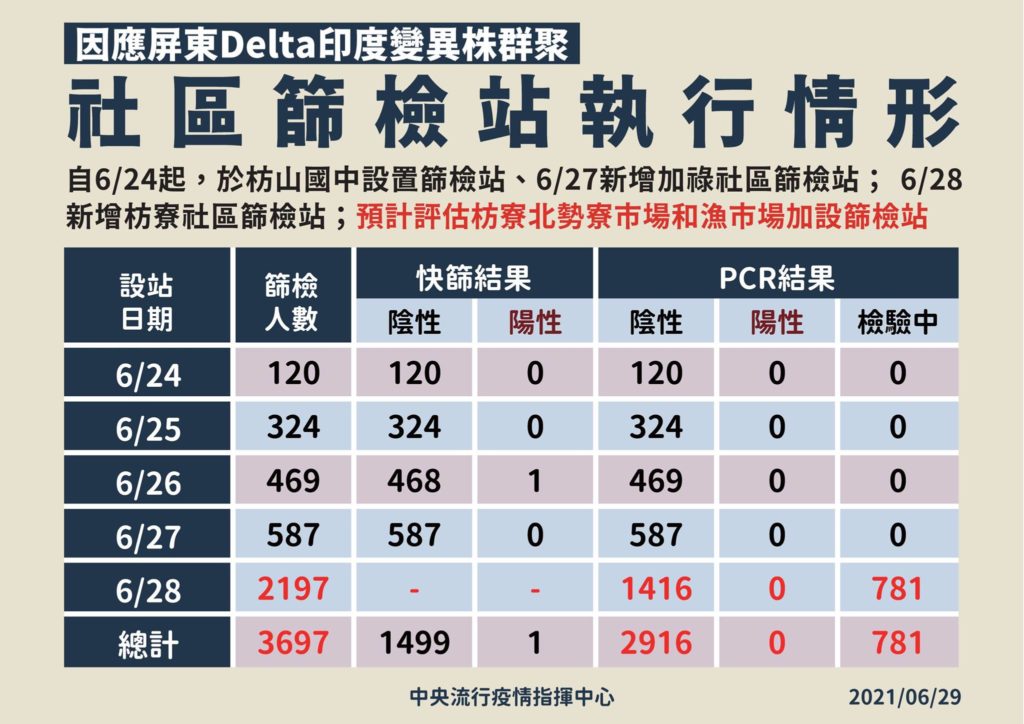 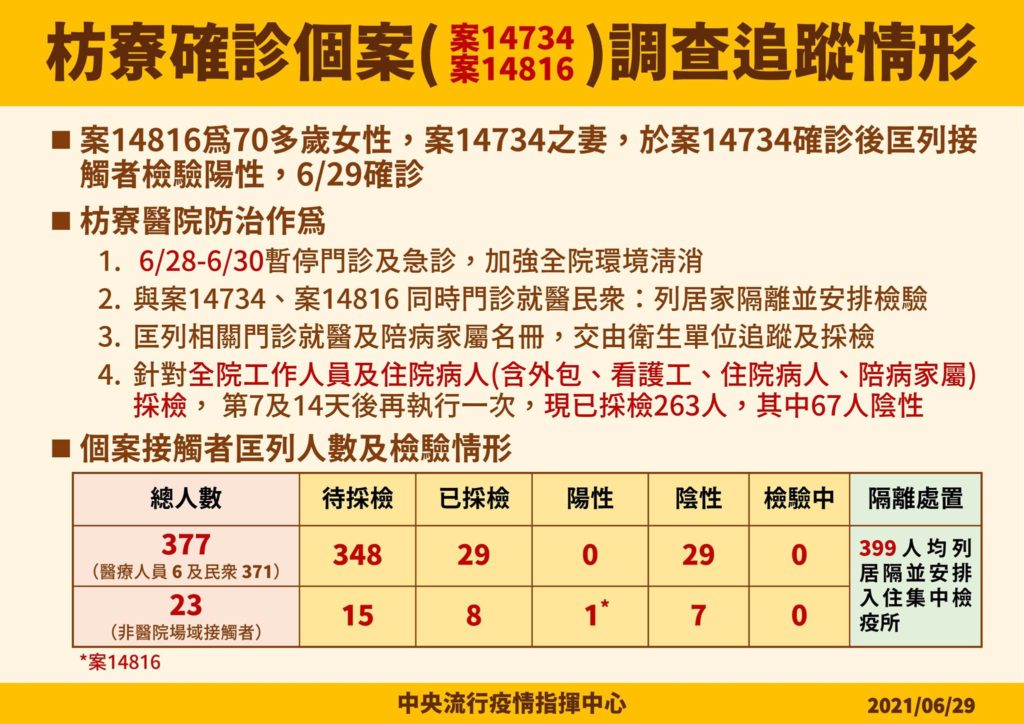 Information on testing in Pingtung. Photo credit: Ministry of Health and Welfare/Facebook

Taipei mayor Ko Wen-je stated that Wanhua continues to be an area of particular concern for Taipei, due to the TAPMC and Huanan Market clusters. Otherwise, cases are still declining for other parts of Taipei. The Taipei Medical University has taken on a greater share of responsibility for vaccinating foreigners in Taipei for the past waves of vaccination, with Ko stating that as vaccination categories expand, it may be possible that the university may be designated for use by foreigners. 13,000 vaccines have been allocated to vaccinate the TAPMC and Huanan Market clusters, which Ko has stated that he believes is sufficient.

Ko otherwise claimed that the TaipeiPASS system used by Taipei is more accurate than the CECC’s QR code system in contact tracing and accused the central government of poor Internet security measures in the online system for applying for economic relief.

Some night markets are expected to re-open for take-out in the coming days.

In comments this afternoon, President Tsai Ing-wen stressed cooperation with greater Taipei and the Pingtung governments. Tsai also brought up the start of bilateral trade talks set to take place tomorrow with the US, asserting that this will include discussing cooperation on COVID-related matters.

With domestically-manufactured vaccines undergoing evaluation for Emergency Use Authorization (EUA), the NPP along with the KMT, has been among those critical of the DPP. NPP chair Chen Jiau-hua criticized the process as having been politicized and suggested that medical authorities would simply comply with the will of the DPP in passing EUA authorization regardless of any potential issues with the vaccine, claiming that information produced by Taiwan’s two domestic manufacturers applying for vaccination is insufficient.

Hou in particular has claimed that this is in accordance with international standards, citing Japan, Singapore, and Israel as examples of countries that it claims testing all inbound travelers. Either way, all travelers will be PCR tested before being released from quarantine.

That being said, the CECC maintained its position on PCR testing today. Taiwan can currently carry out 120,000 tests per day, so it is not for lack of capacity that the CECC is not conducting more tests. Yet the CECC hopes to avoid movement and further contacts that could potentially lead to the spread of COVID-19 if all inbound travelers are PCR tested.

KMT members such as Lien Chan, Ting Shou-chung, and Chang Hsien-yao have been criticized by the DPP party caucus for criticizing AstraZeneca vaccines as dangerous, yet being willing to be vaccinated themselves. This occurred despite not being on the vaccine priority order, leading to criticisms of the KMT being vaccinated using political connections, drawing on elite privilege. For a party whose members constitute a political and economic elite during authoritarian times, the scandal does not reflect well on the KMT.

To this extent, DPP legislator Hsu Shu-hua has called for a probe into the Cheng Hsin General Hospital in Taipei where Ting Shou-chung was vaccinated. Namely, 100 people were vaccinated using the same batch of vaccine used on Ting, but it is unknown who they were. Ting was vaccinated as chair of the hospital. Moreover, of 5,556 vaccines distributed to the hospital, only 3,134 were used on medical personnel, meaning that 2,422 were used on non-medical personnel. As such, similar to the Good Liver Clinic and Dianthus Clinic in Taipei, the Cheng Hsin General Hospital is accused of violating vaccine priority order to vaccine social elites and the well-connected. Reportedly, the hospital has refused to provide further information on its vaccinations. There are reports of the Dianthus Clinic continuing to offer vaccinations despite that its contract for conducting vaccinations with the Taipei city government was annulled and it should no longer have vaccines on hand.

Information on the legal uses of the QR code contact tracing system. Photo credit: Ministry of Health and Welfare/Facebook

The CECC revealed some further details of attempts to purchase vaccines today. Though the CECC declined to reveal details of negotiations with Novavax, which it stated yesterday that it had been negotiating with since last year. With Tzu Chi also hoping to represent Taiwan in negotiating vaccine purchases, the CECC stated that it currently prioritizes TSMC and FoxConn seeking to negotiate with BioNTech and that if the two companies are able to smoothly obtain vaccines, this can pave the path for other non-government groups purchasing vaccines.

Although negotiations are currently under way to try and secure the rights to manufacture Moderna vaccines in Taiwan, capacity is the largest issue. The China Times reports that Moderna hopes for Taiwan to manufacture 300 million to 500 million vaccines in a year. The CECC has stated that international manufacturers are evaluating Taiwan’s capacity and their global planning as part of considerations in manufacturing.

The government maintains a vaccine manufacturing facility of its own, but due to its limited capacity, this is primarily used for testing. Plans are under way to expand government-run vaccine manufacturing capacity to manufacture several million doses to cope with emergencies in the future, to deal with future outbreaks. It is hoped that this facility can be completed in 3.5 years.