60 Domestic Cases Confirmed by CECC, Policy to Deal With Delta Variant Continues to Be Rolled Out

THE CENTRAL EPIDEMIC Command Center (CECC) announced 60 domestic cases at its daily press conference today, along with three deaths. There were no imported cases.

33 cases were in New Taipei, while there were 22 cases in Taipei. There were two cases in Taoyuan, one case each in Keelung, Nantou, and Changhua. 31 cases were already in home quarantine, while only three cases were of unknown origin. The CECC stated today that its COVID-19 prevention strategy emphasizes quarantine measures, while other countries have focused on putting resources into testing.

The Pingtung cluster remains at 12 individuals. With concerns about the Delta variant of COVID-19 spreading in Pingtung among the residents of two towns, 2,000 local residents have been PCR tested, while 225 contacts were listed at higher-risk. To date, there have not been any positive test results. As there are plans to vaccinate the entire two towns, 500 have been vaccinated to date.

Infographic released by the CECC on the new cases today. Photo credit: Ministry of Health and Welfare/Facebook

178 are in home quarantine, including a work contact in New Taipei that tested negative. 38 individuals on the same plane as the two individuals that returned from Peru have tested negative, while three tests are being processed.

There is another case in Pingtung outside of the Delta variant cluster, found due to PCR testing before an operation. Genetic testing is underway to see which variant it is. Two families tested were negative. As this case visited the Fangliao Hospital in Pingtung, the Fangliao Hospital has been closed for disinfection for one day, while 67 staff have tested for COVID-19. New testing stations have been opened up in Pingtung to increase testing.

Two Taipei residents that had contact with Pingtung residents that were originally suspected to be positive have also proved to be negative. Similarly, contact tracing is under way for contacts of individuals from the Pingtung cluster that visited Tainan, while testing will be carried out for Chiayi residents that visited the affected Pingtung areas. Testing has been expanded in Tainan due to a cluster infection of 8 among a family.

Some questions have been raised in the media about whether there were delays with the Pingtung county government’s response to the case, as well as regarding information sharing between Taichung and Pingtung. The family in question who returned from Peru with the Delta variant had their household registration in Taichung.

In the meantime, fears about the spread of the Delta variant continue to spread. The CECC has responded to reports claiming that the Delta variant spread outside of the original individuals that returned from Peru while simply greeting neighbors taking out the garbage by claiming that this is unlikely to have taken place. That being said, one increasingly sees reports in Taiwanese media claiming that the Delta variant of COVID-19 spreads so rapidly that people taking out the garbage can infect each other. Chen Shih-chung reiterated that similarly exaggerated stories have circulated since last year and that it is unlikely to become infected with COVID-19 just from passing by the residence of someone who is infected once, though the odds of this may rise if someone passes by one hundred times. 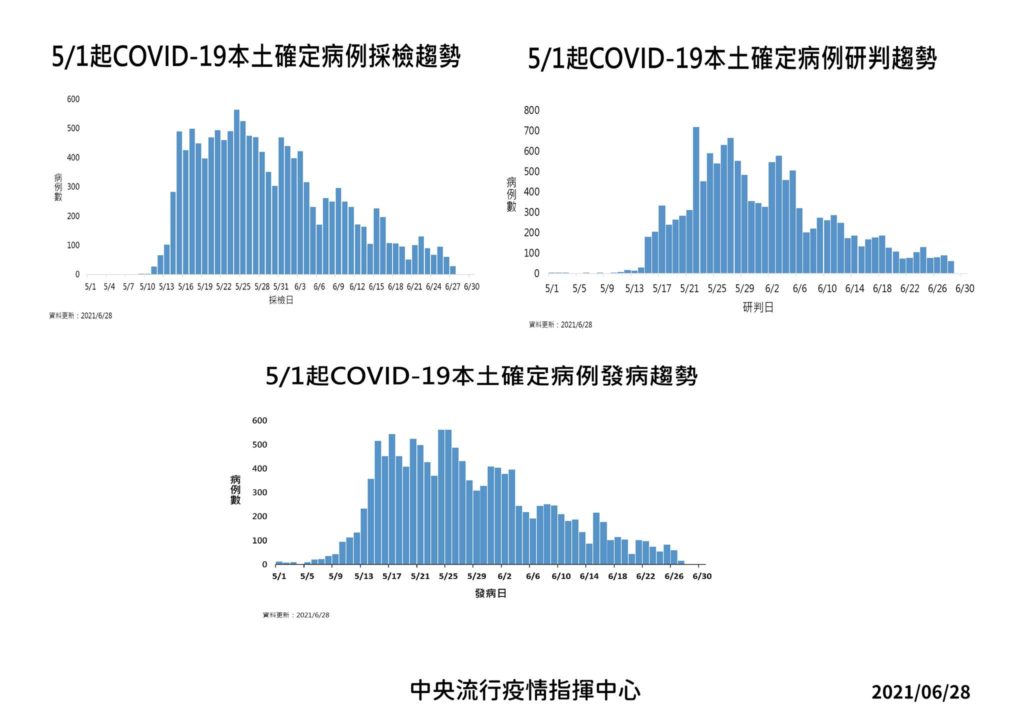 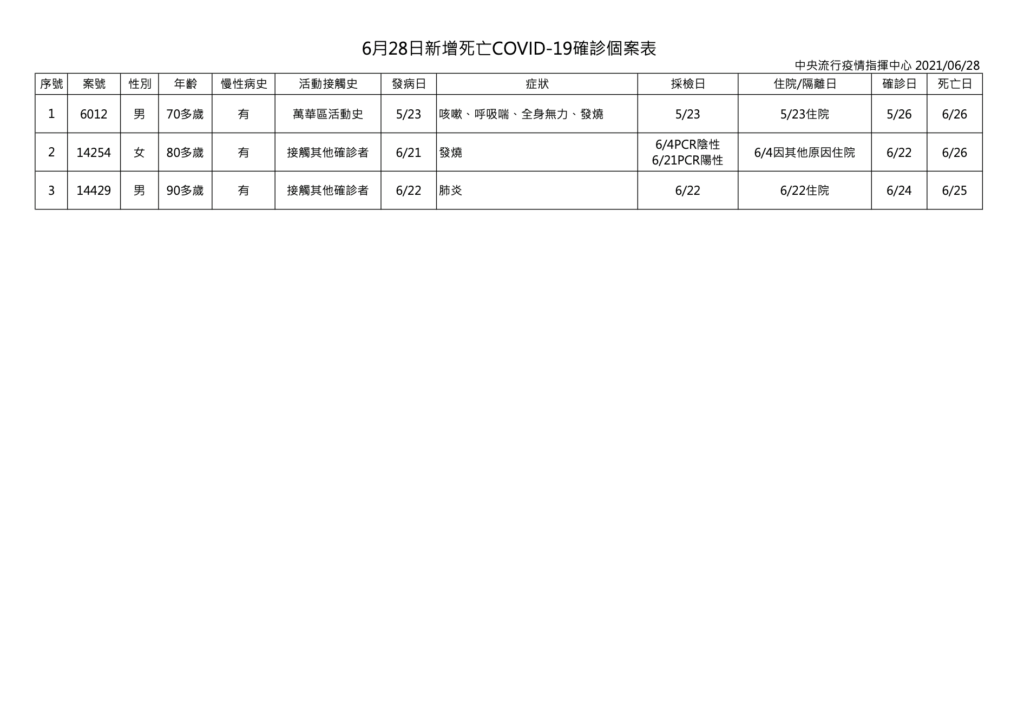 Further data released by the CECC (left) and information on the deaths announced today (right). Photo credit: Ministry of Health and Welfare/Facebook

The CECC reviewed the symptoms of the Alpha variant versus the Delta variant today, emphasizing that the symptoms were primarily similar. The CECC has emphasized that, despite that vaccines appear to be less effective against the Delta variant, they still provide protection and lower the possibility of severe illness and so vaccinations should still take place.

The CECC is increasingly questioned about the possibility of vaccinating children by the media. However, of 427 cases in the current outbreak below nine years old, only one was severe. The CECC also cited international experience as showing low cases among children.

Two more long-term care facilities reported cases yesterday. This marks 91 facilities that have had COVID-19 cases so far, consisting of 94 workers and 272 non-workers. 192 workers are in quarantine.

410,000 doses of the Moderna vaccine will arrive on Wednesday. This is from vaccine purchases by the Tsai administration. Radio host Clara Chou, who is known for leaking information ahead of time, has also stated that Moderna vaccines will arrive on Wednesday. Minister of Health and Welfare Chen Shih-chung confirmed these reports today, but stated that he hoped for less media focus on the matter, due to the possibility of external interference. 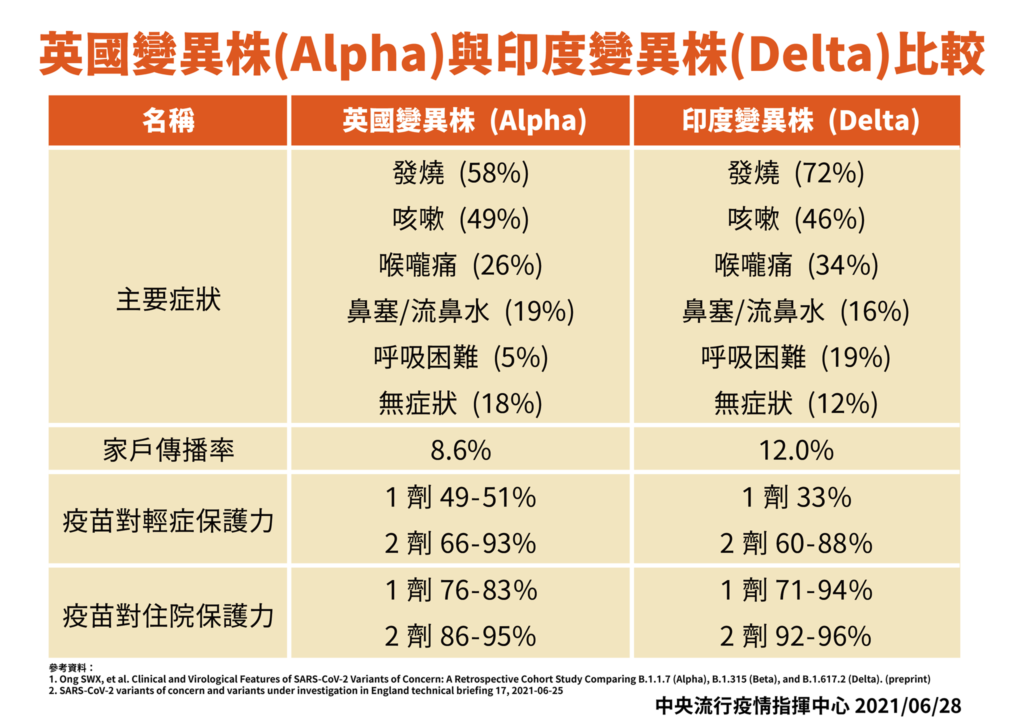 Comparison of the symptoms of the Alpha variant and Delta variant, as well as regarding vaccination effectiveness regarding the two variants. Photo credit: Ministry of Health and Welfare/Facebook

The Miaoli command center that was originally set up on June 4th, as a collaboration between the CECC, local factories, the Ministry of Labor, and the Ministry of Economic Affairs will now be dismantled. Cases in Miaoli in past days were found while already in quarantine.

Parliamentary caucuses in the Legislative Yuan have been asked to draw up lists of personnel willing to be vaccinated among legislative workers, members of committees, and etc. This will presumably be with the purposes of vaccinating personnel are crucial for the functioning of the nation and must be vaccinated first.

An Irish man was found dead in Wanhua yesterday after suddenly collapsing in the streets and passers-by calling ambulance services. The man was found to have been positive for COVID-19 after being PCR tested. Four police officers that attempted to assist the man are currently in quarantine.

Some night markets hope to re-open starting tomorrow, including in Wanhua. Markets will be required to maintain social distancing measures and only be allowed to carry out take-out. Southern Wanhua is still considered a hotspot, with Taipei mayor Ko Wen-je urging that one-fourth of stores first open before gradual re-openings take place.

Some media reports suggest that the first case of infection at the Taipei Agricultural Products Marketing Corporation (TAPMC) took place due to staff that visited tea parlors in Wanhua. Chen stated today that he believes it is very difficult to assess whether the TAPMC cluster began among workers, distributors, or vendors at TAPMC. The Taipei city government has similarly denied that this case can be linked to tea clusters in Wanhua.

According to Ko Wen-je, he believes it will take more time to catch remaining transmission clusters of COVID-19, due to there being fewer cases now, making it harder to find them. Ko has defended Taipei against accusations that it is not doing contact tracing, while also stating that cases are declining outside of Wanhua. Plans to test 13,000 workers at fruit and vegetable markets linked to TAPMC will be announced on Thursday and will require cooperation from the Taipei City Hospital, Far Eastern Hospital, and TAPMC.

In a possible break from the CECC’s policy, Ko stated that he believes that one dose of vaccine is enough to protect against most cases of COVID-19, but that he hopes to prioritize fully vaccinating hot spots. As with plans to vaccinate all TAPMC workers, Taipei is increasingly diverging from the CECC regarding vaccination plans.

In response to domestic cases of the Delta variant in Taiwan, New Taipei mayor Hou You-yi has called for the establishment of a nationwide notification system. Hou stated that the first COVID-19 cases were found in Wulai for the first time during the start of the outbreak. 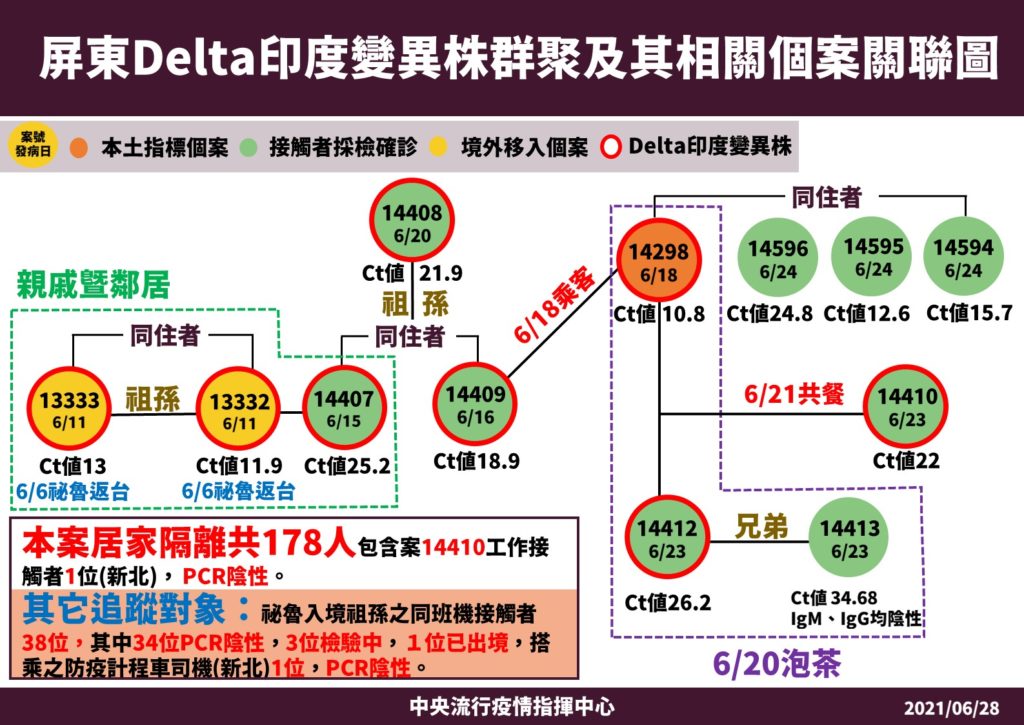 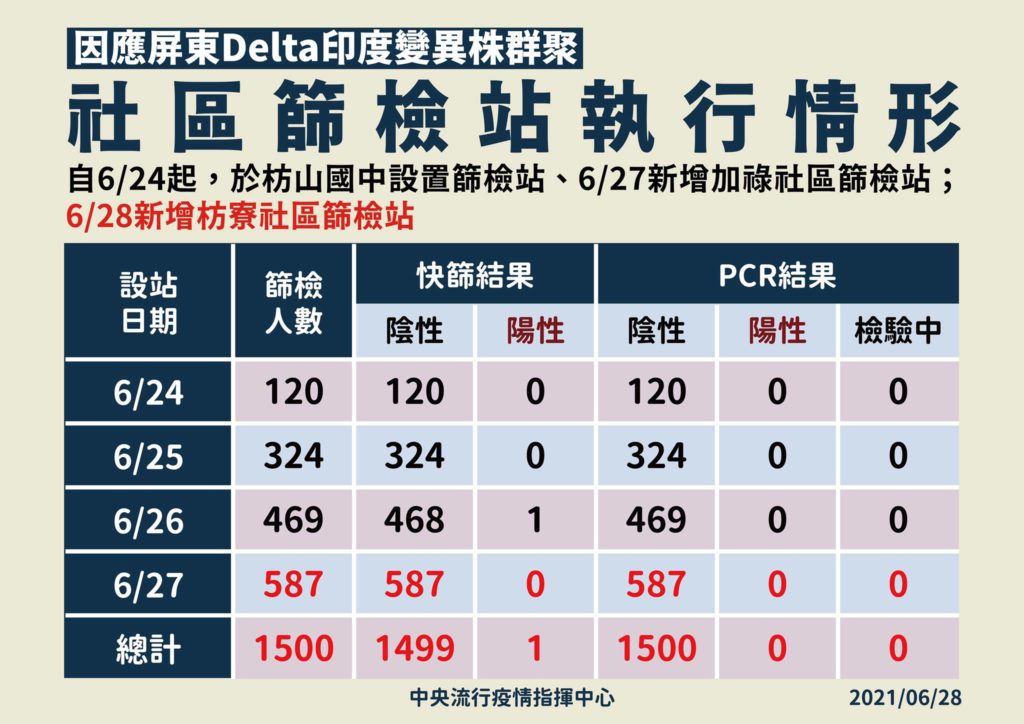 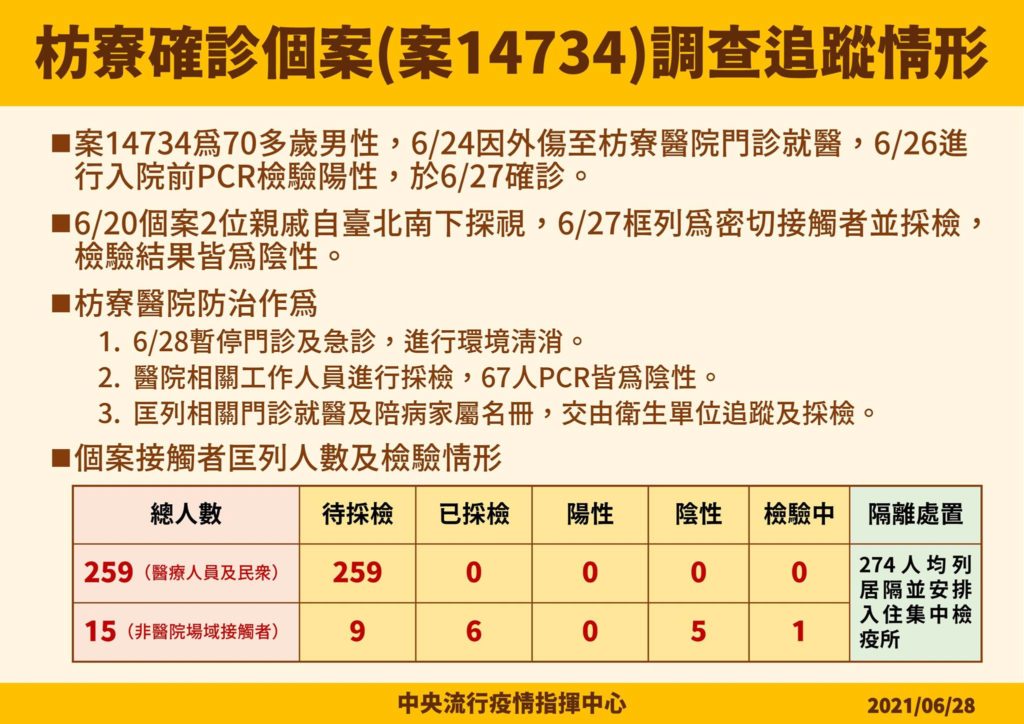 Information about the Pingtung cluster released by the CECC today, including information on contact tracing and testing. Photo credit: Ministry of Health and Welfare/Facebook

According to CECC advisor Li Ping-ing, despite the emergence of the Delta variant, it is still possible that the current level three alert may be lifted on July 12th.

The CECC defended itself against news reports that it did not seek to purchase the Novavax vaccine, stating that it inquired with Novavax at the end of last year and was informed that it should try and purchase Novavax through the COVAX platform. As the COVAX platform is experiencing delays, the CECC has otherwise sought to dialogue directly with the company. The CECC generally dialogues with companies that have promising phase II results.

Cooperation between the CECC, TSMC, and FoxConn regarding vaccine purchases of BioNTech is still under way, though there are difficulties. Tzu Chi currently does not have the same authorization from the government in the same way that TSMC and FoxConn have authorization from the government to negotiate vaccine purchases on its behalf.