27 of the new cases were already in quarantine. 41 cases were in New Taipei, 33 cases were in Taipei, eight cases were in Tainan, and three cases were in Taoyuan. One case each was reported in Pingtung, Hsinchu, and Nantou. More statistics on individuals released from quarantine will be released by the CECC in the near future. The CECC stressed that trends were still downward, though there continue to be concerns about public gatherings. 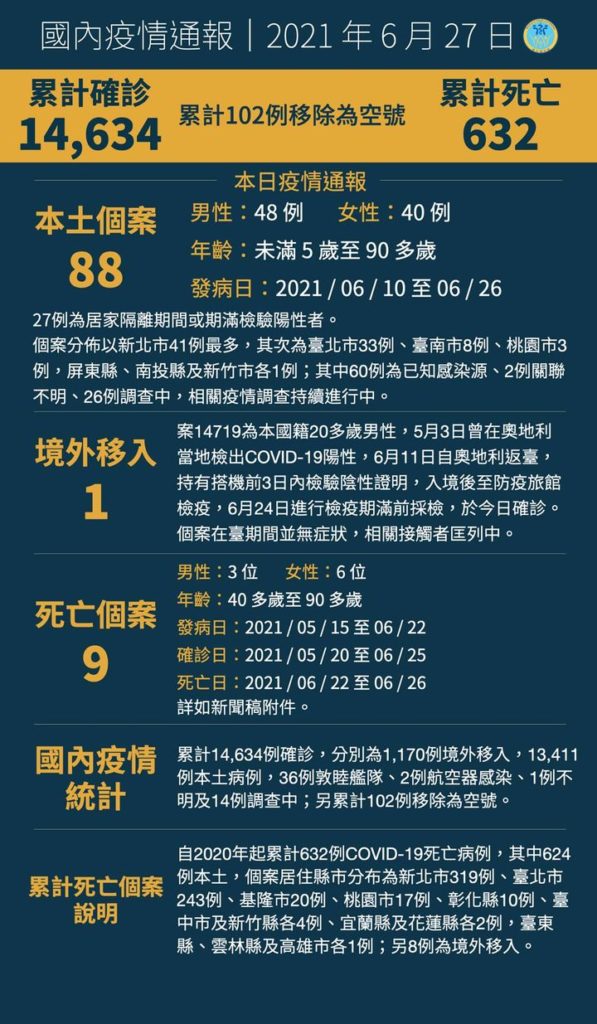 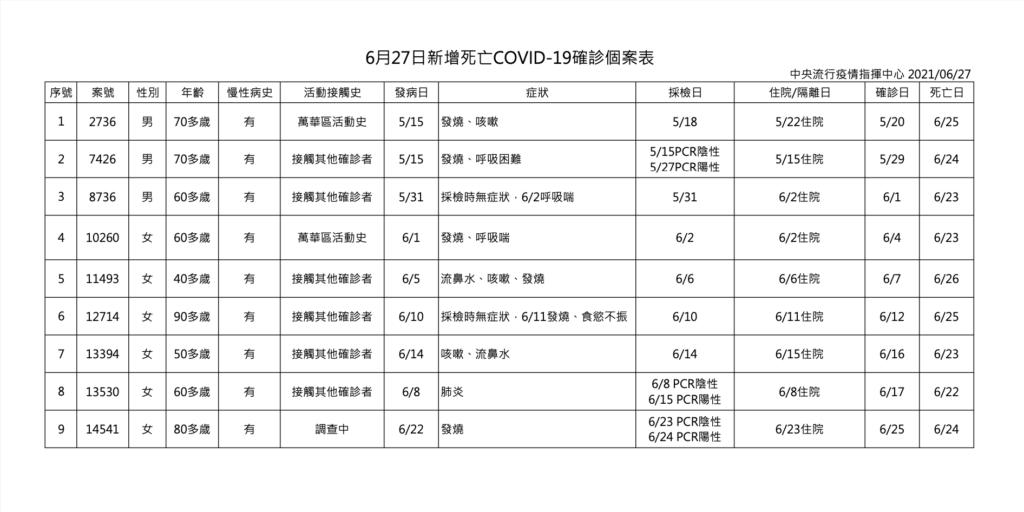 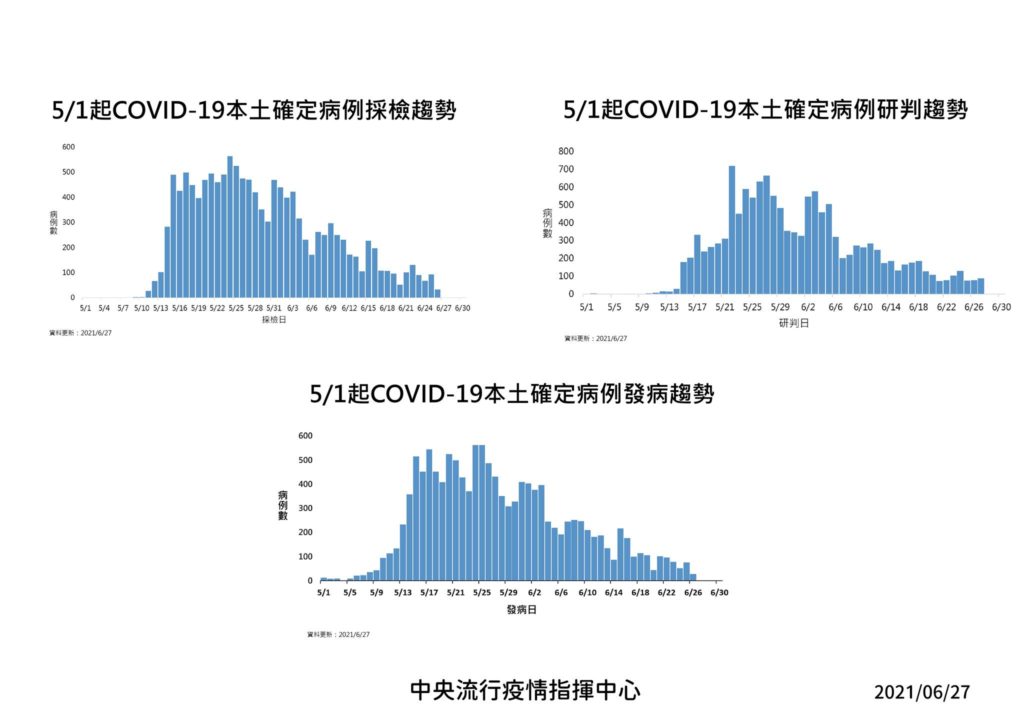 The cluster in Pingtung, which is the first domestic spread of the Delta variant in Taiwan, is now up to 12 individuals. 444 tests yesterday were negative, following the processing of 20 tests. 469 tested in another round had one positive test from rapid testing, but PCR testing showed this to be negative. 173 are currently in quarantine in connection with the cluster, with plans to expand quarantine.

The two affected towns, Fenggang and Shanyu, are being fully vaccinated and are being tested. The towns are under “quasi-level four” status, with the government delivering food to local residents as they are in quarantine. The cluster has increased to 12 individuals that have the Delta variant of COVID-19. The quarantine took place despite that restrictions on indoor gatherings seem to have been followed, and that individuals did not seem to have violated quarantine.

Pingtung will be allocated more medical supplies when necessary. Pingtung was previously sent 21,000 doses of vaccine, but will be allocated 1,200 more for the two affected towns. The CECC stated that it will not wait too long to open this up to other categories, if rates of vaccination are slow.

Visitors and workers at a shrine in Jiali District, Tainan, have been quarantined due to a visit by one of the members of the Pingtung cluster to the shrine. The CECC is also testing individuals on the same plane as the two individuals that returned to Taiwan with the Delta variant, particularly those who were sitting nearby. Clusters in other cities are also being examined to see if they, too, are also the Delta variant.

Pingtung county magistrate Pan Meng-an has criticized media reports that led to confusion regarding the Pingtung cluster, with some reports suggesting that the two individuals that returned to Taiwan from Per had the Lambda variant—which originated in Peru—rather than the Delta variant.

Some criticisms have taken place of plans by the CECC to make quarantine periods free for people returning from high-risk countries, with some rerouting flights through high-risk countries to save on quarantine costs. The CECC is considering adjustments to this policy, but will retain current measures for now.

Costs for PCR tests have been lowered to 3,500 NT. Urgent cases will be 4,500 NT. Documentation will also be provided for students that need to show vaccination before being allowed to travel abroad. 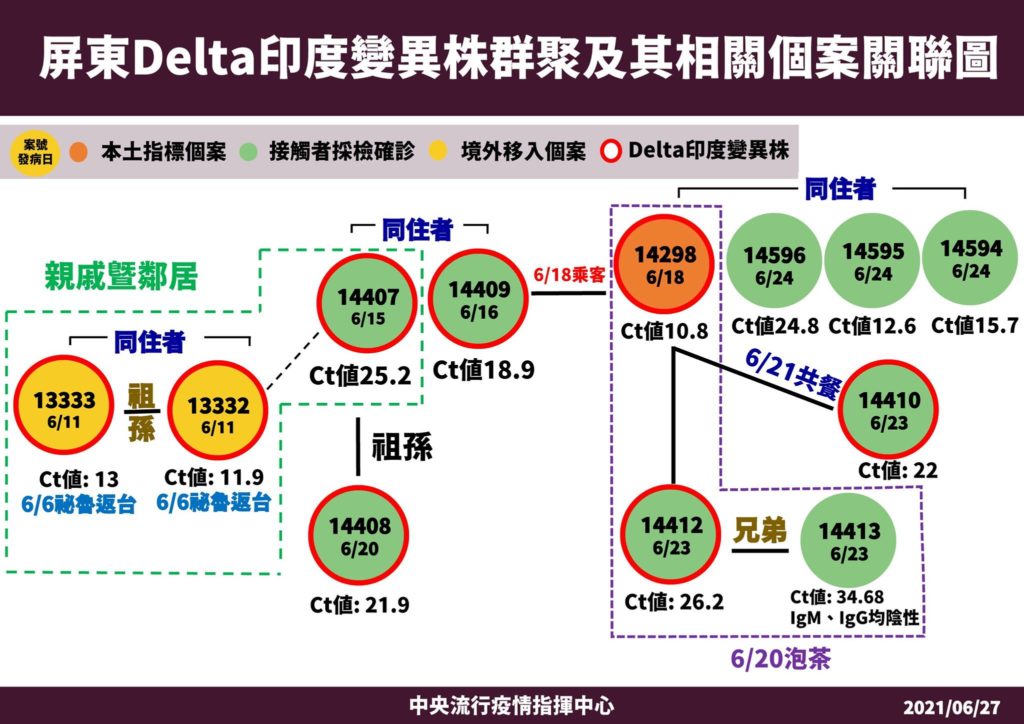 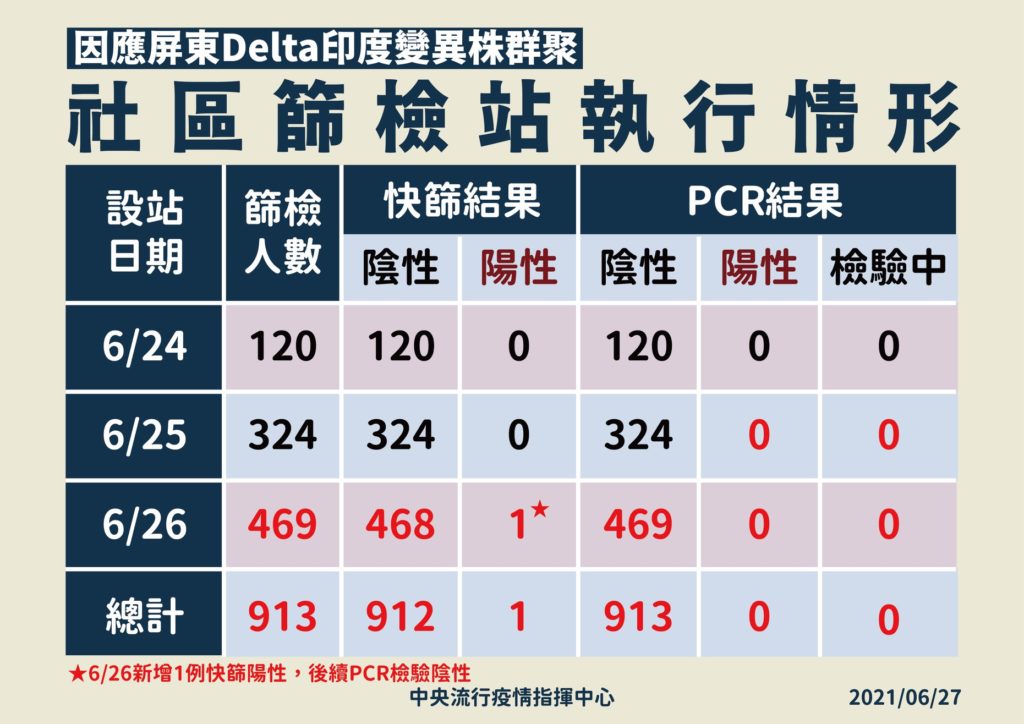 Contact tracing map for the Pingtung cluster (left) and information about testing in Pingtung (right). Photo credit: Ministry of Health and Welfare/Facebook

Fruit sellers in Fangshan, Pingtung, where the two towns in Pingtung that have seen the first cases of the Delta variant in Taiwan are located, have been affected by the outbreak. Reportedly, orders have declined, due to unfounded fears that people could catch COVID-19 by eating fruit from Fangshan.

Some have called for instead supporting Fangshan by increasing orders from the town. Likewise, some netizens have crowdfunded for medical workers in Pingtung, raising 55,000 NT to buy 1,000 goggles for medical workers. Pan Meng-an has criticized this stigmatization of Pingtung.

Due to the effects of the outbreak, rent for storefronts has substantially decreased in Shilin and Ximending in Taipei. Rent has declined by 60% in Shilin and by 30% in Ximending, while vacancy has exceeded 15% at its peak in the East District.

There were reports of crowds in Nanfangao and Toucheng today, possibly reflecting that the lockdown fatigue is setting in among the public. Similarly, long lines have been reported outside of well-known stores in Changhua.

National Taiwan University Hospital staff will return to normal operations on June 29th. This takes place after 96% of medical personnel at the university were vaccinated, with PCR testing requirements and daily health monitoring instituted for workers there. It is to be seen if other hospitals in Taiwan follow suit. Namely, there continues to be a need to treat other medical emergencies in Taiwan, even during the COVID-19 pandemic.

The Military Taoyuan General Hospital has been asked to stop accepting new patients, test workers, patients, and people accompanying patients, and then reconsider whether to open after 14 days.

Though questioned about whether the CECC would begin vaccinating individuals under 20, the CECC stated today that at present, only 921 individuals under 20 have caught COVID-19, which is 6.9%. This remains relatively low, though based on the experience of other countries, as vaccination is carried out, it is expected that there will be an increase in the proportion of younger individuals that catch COVID-19. As such, the CECC still prioritizes individuals over 65 years old for vaccination.

Category 8 individuals, between 65 and 74, will be eligible for vaccination starting on July 1st.

With attacks by the pan-Blue camp on Minister of Health and Welfare Chen Shih-chung and the CECC, Su Tseng-chang criticized such attacks as “unkind and unfair” in comments today.

Infographic released by the CECC responding to disinformation about mRNA vaccines. Photo credit: Ministry of Health and Welfare/Facebook

Criticisms of the En Chu Kong Hospital in New Taipei have ensued after a confirmed COVID-19 case was not diagnosed at the hospital, due to the patient returning to the hospital three times but not being tested. In particular, the case is seen as reflecting poor coordination between the Kaohsiung and New Taipei city governments, seeing as this individual later traveled to Kaohsiung, leading to 12 contacts to become infected, raising questions about why Kaohsiung was not notified. Subsequent backlash has led the patient’s name and address to be leaked online, with the patient blamed for his actions and accused of having refused to be hospitalized.

The Control Yuan has launched investigations into the lowering of quarantine periods for pilots to three days of quarantine followed by eleven days of self-health management, as well as into “agongdian” tea parlors in Wanhua. As part of this investigation, Chen Shih-chung has been interviewed by members of the Control Yuan. Otherwise, the preliminary results of the investigation have found that most tea parlors in Wanhua are registered as catering establishments.