104 DOMESTIC CASES and 24 deaths due to COVID-19 were announced today at the Central Epidemic Command Center’s (CECC) daily press conference. The current level three alert will also be extended from June 28th to July 12th.

The majority of cases were in the greater Taipei area, with 45 cases in New Taipei, 22 cases in Taipei, 9 cases each in Kaohsiung and Hsinchu, and seven cases in Taoyuan. There were four cases in Miaoli, three cases in Keelung, two cases in Yilan, and one case each in Changhua, Nantou, and Pingtung. Cases were up from the past few days, which primarily saw cases in the seventies. This may reflect increased travel over the Dragon Boat Holiday, which could be another reason for extending the level three alert, seeing as spread from the Dragon Boat Holiday may not yet be visible. 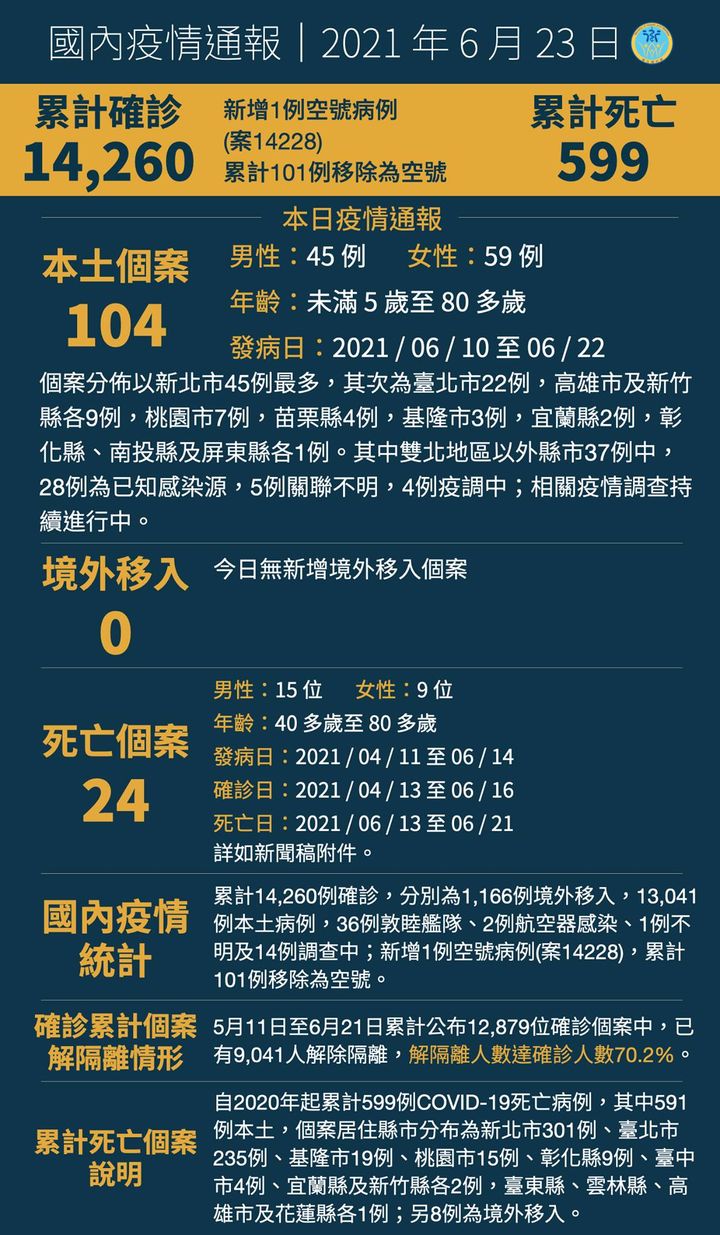 The CECC stated that while trends showed significant improvement, the situation was not at the point yet where it would consider lifting the COVID-19 alert. Although the CECC was questioned by media as to whether it was hoping for a specific percentage of vaccination before lifting quarantine, it asserted that it is primarily hoping for an improvement in the situation, and was attentive to international precedents for lifting lockdown. There are still clusters at long-term care institutions and crowds at markets, resulting in the view that it is too early to lift the level three alert. Minister of Health and Welfare Chen Shih-chung also reminded that for individuals unable to maintain necessary quarantine measures at home, they could quarantine at facilities run by the government.

The CECC is conscious of growing quarantine fatigue, but has called on the public for patience. Although there is concern about future waves of COVID-19, Chen Shih-chung stated that the CECC was focused on keeping its eyes on maintaining level three at present, though it did not rule out further adjustments to measures.

Key personnel for maintaining the running of the nation have been designated for vaccination, but CECC is open to further discussion with relevant agencies on other groups to include for further waves of vaccination. Teachers are to be included in future waves of vaccination, though schools are out, which will be coordinated with the Ministry of Education. Namely, teachers will be teaching children that have not been vaccinated, so the view is that they need to be vaccinated to ensure that they do not pass on COVID-19 to others.

Keelung’s Chenggong Market has reopened for business, after stopping work three times due to COVID-19 cases. The market was closed for nearly a month.

Plans have been rolled out in Taipei and New Taipei to vaccinate homeless individuals, with local authorities coming up lists for vaccination. The New Taipei city government claims that it has put the majority of homeless in settlement facilities and tests them regularly. At least 14 homeless in Wanhua or around the Taipei Main Station have been infected with COVID-19 to date.

According to New Taipei mayor Hou You-yi, the rate of infection at testing sites in New Taipei is 1.1%, while the Rt is .40.

Home test kits are to start being sold at supermarkets and convenience stores starting today. This includes 7/11, FamilyMart, OKMart, and Carrefour.

The KMT has continued to accuse President Tsai Ing-wen of being a “vaccine beggar,” with regards to that much of Taiwan’s current vaccine supply comes from countries that have made donations, such as the US and Japan. Legislator Luo Chih-chiang and party chair Johnny Chiang have been among those most strident in such criticisms.

According to the deep Green Taiwan Public Opinion Foundation (TPOF), Tsai Ing-wen currently has a 43.2% approval rating and a 44.5% disapproval rating, experiencing a 23-month low in approval ratings. 41.5% are satisfied and 48.9% are dissatisfied with the performance of Premier Su Tseng-chang. That being said, approval for other politicians is also low, and the TPOF is known to have an animus against Tsai. 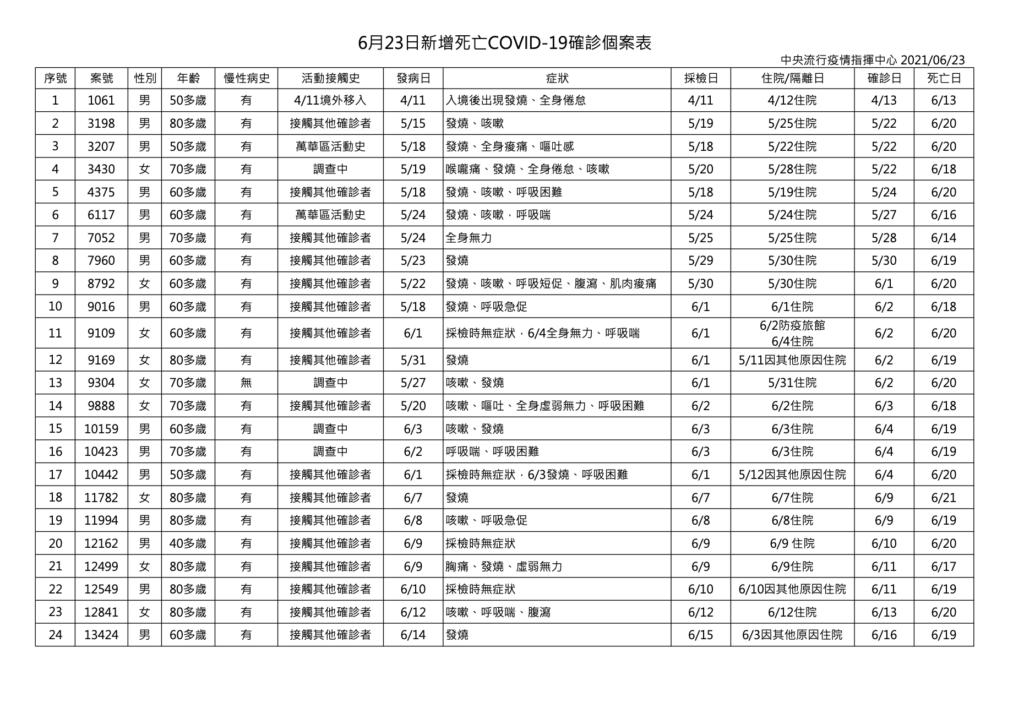 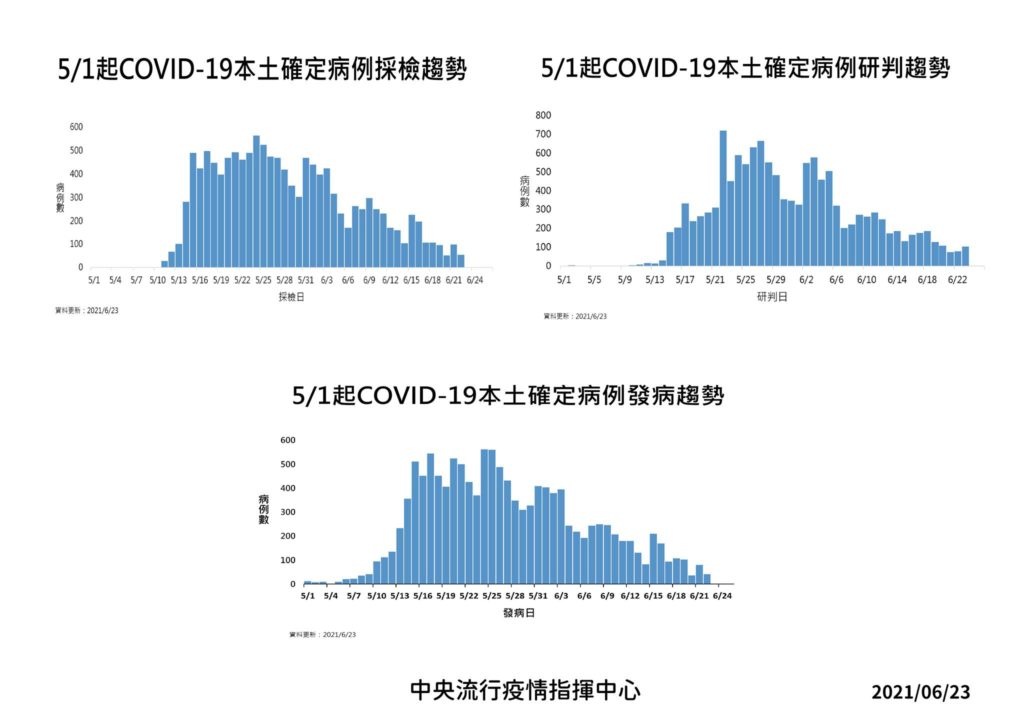 Information on the new deaths announced today (left) and further data released by the CECC (right). Photo credit: Ministry of Health and Welfare/Facebook

Despite lack of proof, the media continues to report on sudden deaths after vaccination, primarily among the elderly, as though such deaths are linked to being vaccinated. In one egregious example, a baby was reported on in the Apple Daily as dying after its mother was vaccinated as though this were linked, with claims that the baby was affected by the vaccine through breast milk.

As with before, the majority of individuals that died had underlying conditions. Sixteen of those that died were above 70. Seven were living in long-term facilities, six were undergoing dialysis, and sixteen had long-term conditions. Otherwise, two cases were in their fifties.

With some individuals fearing AstraZeneca vaccines, individuals are allowed to pick whether they want to be vaccinated or not with the brands available at a vaccination site, while local authorities may divide up vaccination brands by location. The CECC has been questioned many times about whether it will set up an app showing which vaccines are available at vaccination sites, but has demurred on the issue.

Lithuania has announced that it intends to donate 20,000 vaccine doses to Taiwan, likely hoping to use the opportunity to strengthen ties with Taiwan and signal where it stands in international geopolitics vis-a-vis Taiwan. It is to be seen whether other countries that are not regional powers, in the way that the US and Japan are, will follow suit as part of diplomatic maneuvering.

In response to Lithuania’s donation, foodstuff manufacturing company I-mei has sent a twenty-foot container of its food products to Lithuania.

Domestic vaccine manufacturer United Biomedical, through its distributor Vaxxinity, will sell one million doses of its vaccine to Paraguay after they pass Emergency Use Authorization in Taiwan. It is to be seen if this boosts confidence in domestically-manufactured vaccines, though stocks for the company are up. Medigen, another domestic manufacturer, will conduct phase three testing in Paraguay.

Entertainer Jia Yong-jie continues in efforts to raise funds to purchase medical equipment needed in the fight against COVID-19. After raising enough funds to purchase 344 high-flow nasal cannula machines, she has now purchased 100 powered air-purifying respirators from Sweden and Germany. The head of the DT Group reportedly paid the bill. Seven are to be sent to hospitals run by Tzu Chi.

In the same timeframe, Tzu Chi has applied to purchase 5 million doses of the BioNTech vaccine and submitted documentation to the central government. This takes place after accusations by the KMT that the central government was seeking to block Tzu Chi from making vaccine purchases. The CECC stated yesterday that it is welcome to non-government groups seeking to make purchases, but that too many groups seeking to make purchases could lead to issues. Today, the CECC stated that it will formally respond to Tzu Chi’s request to purchase vaccines, as well as that it is exchanging documents with FoxConn and TSMC, which also wishes to purchase vaccines.

Much of the CECC’s comments today were about COVID-19 cluster at the Taipei Agricultural Products Marketing Corporation (TAPMC). The number of cases at TAPMC has grown to 54 now, though there has been no sudden explosion of cases, and these cases have been since May. The TAPMC is significant because it handles 1/3rd of fruit and vegetable distribution for Taiwan as a whole and has links to fruit and vegetable markets across all of Taiwan.

New cases include a delivery worker at TAPMC, who reportedly had a fever for over a month but did not visit a doctor, fearing the cost, and he was only diagnosed after a traffic accident forced him to visit the doctor.

Infographic about the extension of the level three alert. Photo credit: Ministry of Health and Welfare/Facebook

It is possible that Chen visiting fruit and vegetables is a means of pressuring Taipei mayor Ko Wen-je, with reports that the Taipei city government is refusing to cooperate with the central government regarding cases at the Taipei Agricultural Products Marketing Corporation (TAPMC).

Notably, Taipei mayor Ko Wen-je claimed that he would instead vaccinate workers at TAPMC and that this was a way to save on time and money. The CECC has sought to emphasize that vaccination is primarily a preventative measure, not a treatment measure, and that testing and contact tracing is still necessary. Chen urged that contact tracing must be carried out at different levels of authorities, that this was necessary for transmission chains to be cut off, and that such information must be integrated, perhaps raising the possibility that contact tracing from Taipei or other local governments is lax, hence Chen’s emphasis on this point.

Some contestation seems to have taken place between the Taipei city government and the CECC regarding testing, with TAPMC workers required to have negative test results from tomorrow onward to enter work facilities from tomorrow onward. The Taipei city government was originally hoping to conduct rapid tests, followed by PCR tests because of the false positives from rapid tests. The CECC feared that individuals waiting fifteen to twenty minutes in crowds for the result of rapid tests would lead to COVID-19 spreading among them and thus pushed for only carrying out PCR testing, though Chen denied that he was overly placing priority on PCR testing.

Taipei mayor Ko Wen-je hit out against media reporting on the TAPMC cluster today, however, claiming that cases for Taipei overall were still declining and that cases at TAPMC were under control. Ko stated that he did not view the case at TAPMC as being as dangerous as clusters among migrant workers in electronics factories in Miaoli because they do not live in dormitories and often lived near TAPMC, even if there are concerns about the strong transportation links between TAPMC and other parts of Taiwan.

More generally, Ko has been criticized over clusters at a long-term care facility in Shilin, where 47 have been infected, and at the Taipei Performing Arts Center, where 40 workers have been infected. These were not sudden cases overnight, but clusters that developed since May. There has been increased focus on these slowly growing clusters as of late.