THE CENTRAL EPIDEMIC Command Center (CECC) announced 175 domestic cases of COVID-19 today, along with 19 deaths. Minister of Health and Welfare Chen Shih-chung did not preside over today’s press conference, seeing as he was attending a legislative session.

Cases still were primarily concentrated in the greater Taipei area, with 87 cases in New Taipei and 34 cases in Taipei. New Taipei is expected to be slower in following declining trends than Taipei, though cases today for New Taipei were close to three times that of Taipei. Miaoli also had an uptick of cases, due to ongoing testing among migrant workers there, with 31 cases. Otherwise, there were ten cases in Hsinchu, seven cases in Taoyuan, and two cases each in Hualien, Keelung, and Taitung. The new cases in Miaoli today were already under quarantine as contacts of COVID-19 cases, while the Hsinchu cases were at long-term care institutions. 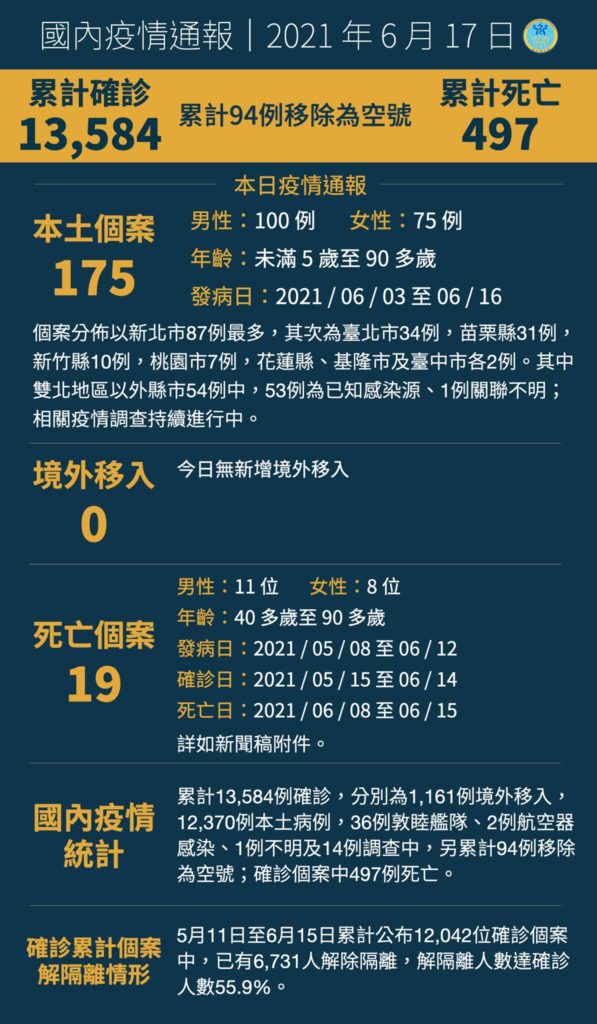 Infographic on the new cases today released by the CECC. Photo credit: Ministry of Health and Welfare/Facebook

83 long-term elderly care institutions have seen COVID-19 cases to date, including 67 workers and 207 non-workers, which includes residents. 185 individuals are under quarantine due to contacts with individuals working, residing, or receiving treatment at long-term care facilities. There is particular concern that elderly care institutions are sites that could lead to COVID-19 entering neighborhoods, with cases in not only Hsinchu, but also greater Taipei.

Online disinformation currently alleges that the SMS QR code system set up by Audrey Tang is profiting private interests. The National Communications Commission has responded to this, denying that this is the case.

When asked by the media, the CECC today stressed that handling for dead bodies continues standard processes, with bodies put in two bags that are mandated that are not to be open, in order to avoid spread of COVID-19. The funeral industry handles this in accordance with professional standards.

Likewise, the CECC was asked about the possibility of extending the current level three alert by two weeks. The CECC stated that COVID-19 alerts would be adjusted when needed.

Hsinchu mayor Lin Chih-chien has announced that, with traditional markets heavily hit by the pandemic, rent for publicly run markets for May and June will be free. It is to be seen if this announcement leads to similar policies being rolled out for other traditional markets.

The Taiwan Alzheimer Disease Association is currently calling for individuals with Alzheimer’s and their caretakers to be included in category five personnel for vaccinations. Namely, people with Alzheimer’s constitute 20% to 40% of individuals who have died from COVID-19 in other parts of the world.

Speculation has been stoked in the media after comments by President Tsai Ing-wen and Premier Su Tseng-chang about making team adjustments in the fight against COVID-19, with some speculation that this could refer to the reshuffling of personnel. The CECC has stated that these comments are with regards to efforts fighting COVID-19, not in reference to the possibility of reshuffling CECC or Ministry of Health and Welfare personnel. 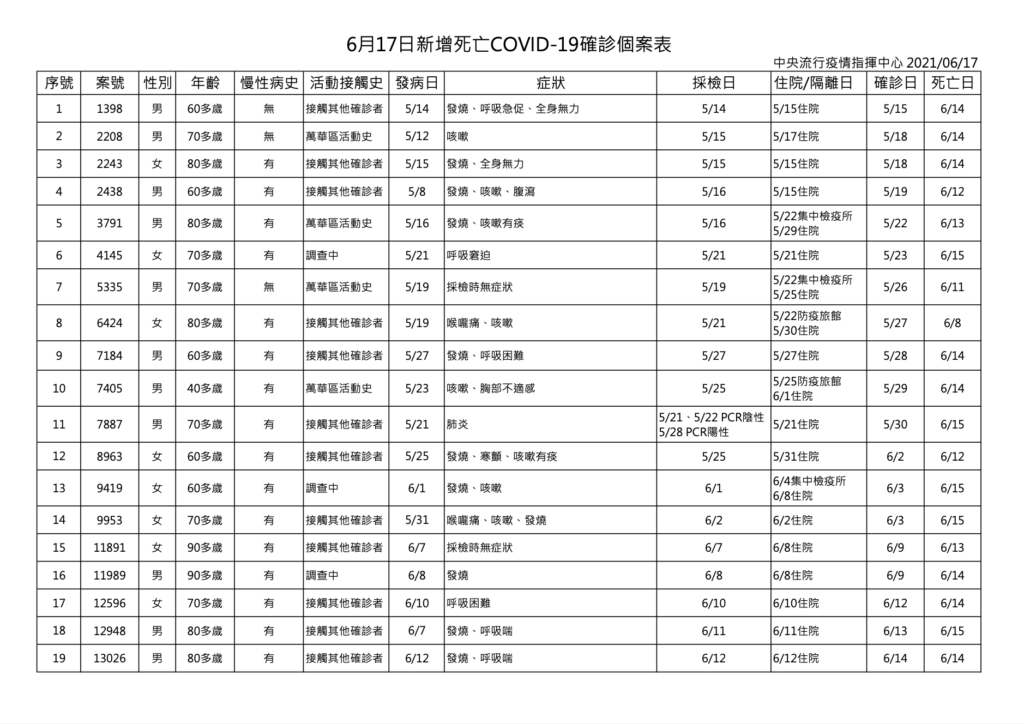 Information on the deaths announced today by the CECC. Photo credit: Ministry of Health and Welfare/Facebook

According to New Taipei mayor Hou You-yi, while cases were up in New Taipei again today, these were in known hotspots. Hou asserted that this shows the importance of monitoring hotspots while also monitoring areas that remain low-risk. The current rate of infection at testing sites is 1.4%. Outside of neighborhood testing, testing by companies will take place, and there are plans to conduct home testing in the future, with Hou stressing the need to find asymptomatic cases.

Taipei mayor Ko Wen-je announced today that Wanhua, thought to the start of the current outbreak, is no longer considered a hotspot. Other hotspots have also been decreased in risk status. The current rate of infection at testing sites is 0.9%, while 98.4% of individuals that make appointments online for vaccination come in to be vaccinated. According to Ko, as businesses have been affected by the outbreak and vaccinations will not arrive in time, there need to be considerations of how to re-open, Ko praising Taipei residents for managing the outbreak without a need for forcible lockdowns outside of managing crowds at traditional markets.

Ko stated that asymptomatic cases will be required to quarantine at centralized quarantine hotels going forward and not at home, to prevent transmission chains. Taipei will test contacts of asymptomatic cases, providing transportation fees and paying for tests. For vaccination, Ko stressed using local capacity rather than setting up large vaccination sites for photo ops. Taipei city has launched a mobile vaccination team that visits homes to vaccinate some elderly.

The CECC is hoping to vaccinate 90% of individuals above 75 years old, before opening up vaccinations to individuals above 65 years old. To avoid vaccine doses going to waste because vaccines can only last for six hours after a bottle is opened, vaccination sites search for people in the eligible COVID-19 categories that have not been vaccinated, while opening this up to further groups on the priority needed when needed. This has been reported on as a policy reversal, seeing as there were previously orders to throw out vaccine doses to avoid individuals using this as a pretext to violate the vaccination order—that being said, this led to criticisms that this would leads to over 1,000 doses being wasted per day.

Legislators and elected representatives are not included in the vaccine priority list currently because they are not involved in frontline work against COVID-19. In vaccinating individuals undergoing dialysis, they are working off of lists provided to them by the relevant agencies.

140,000 vaccinations took place yesterday. There are increasing reports in the media of sudden deaths that have taken place after COVID-19 vaccination, with 13 deaths claimed to have happened so far. Similarly, there have been five reported cases of blood clots after vaccination so far, though only three have been confirmed. 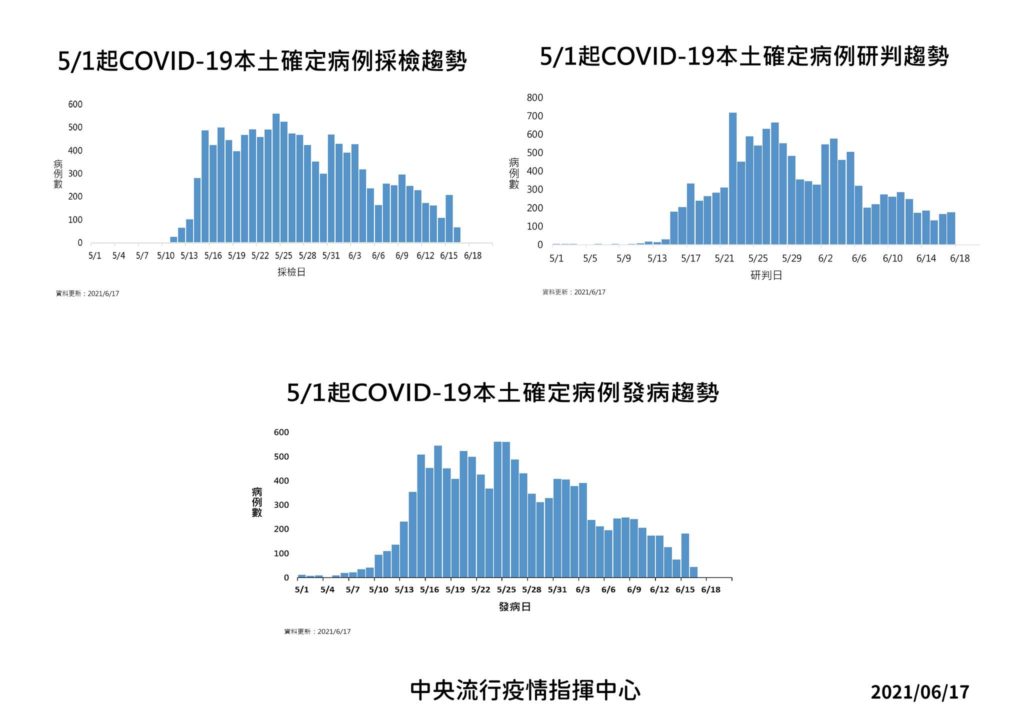 The Tsai administration may need to counteract the growing narrative in the media that vaccinations lead to sudden deaths, however. The CECC focused much of its press conference today on the matter, stating that other countries that began vaccination with the elderly, such as Japan and South Korea, saw similar concerns.

New Taipei mayor Hou You-yi, Changhua county magistrate Wang Mei-huei, and Taichung mayor Lu Shiow-yen, were critical of media reports that suggested a link between vaccinations and these deaths as leading to fears among the elderly about vaccinations, stating that this still needed to be investigated, but that it was better to be vaccinated otherwise. The CECC urged those with underlying conditions to be vaccinated, stating that those with underlying conditions should not fear being vaccinated.

This morning in the legislature, Chen Shih-chung apologized for delays in vaccine acquisition today, citing delays in shipping vaccines that have taken place internationally. Chen stated that while it was important to encourage Taiwan’s domestic vaccination, this did not mean that domestic vaccines would automatically be passed for an Emergency Use Authorization (EUA), with safety evaluation for vaccines continuing to be stringent and impartial.

The CECC was asked today if Terry Gou can carry out vaccine imports if he has a letter of authorization from Shanghai Fosun. The CECC responded that this is not the case, though they would continue to support efforts by private companies to purchase vaccines. Chen stated that he expected Gou to have difficulties with vaccine purchases, given global shortages, though he was attacked by KMT legislators that claimed he was not doing enough to aid Gou.

The Food and Drug Administration has consulted with other countries regarding what EUA standards in the US, EU, and Japan to better understand their respective views. The FDA inquired with the US FDA on May 20th, which responded that they were still discussing their process for EUA. Such dialogues are likely to continue.