132 DOMESTIC CASES of COVID-19 were announced at the Central Epidemic Command Center press conference today, with three imported cases. Eight deaths were confirmed. Although testing is down due to the Dragon Boat Festival holiday over the weekend, this is the third consecutive day of cases under 200.

65 cases were in New Taipei, with 26 cases in Taipei. 18 cases were found in Miaoli, 12 cases in Taoyuan, three cases in Keelung, two cases each in Tainan, Taichung, and Hualien, and one case each in Chiayi and Changhua.

Of the 11,722 cases to date since the outbreak began, 6,188 cases have been released from quarantine, showing that pressure on medical resources has been alleviated. This has not always been equal between medical facilities, the Far Eastern Memorial Hospital alone is responsible for handling 11% of ICU cases to date during the outbreak. 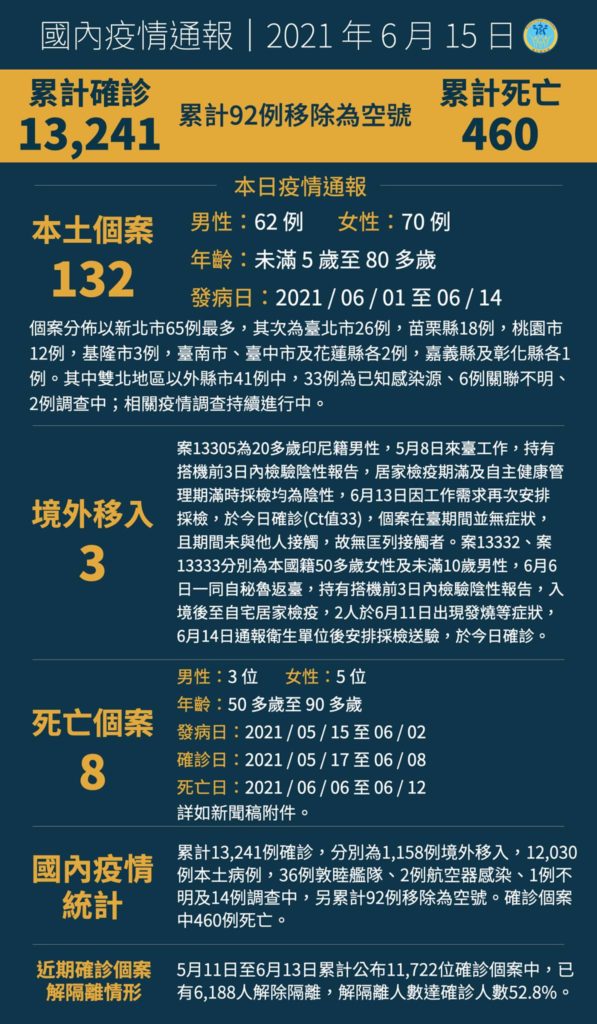 But though numbers of daily cases and deaths are down, Minister of Health and Welfare Chen Shih-chung stated that the number of cases may increase in the next few days, with testing of high-risk migrant workers scheduled to take place from June 15th to June 18th. Around 1,400 individuals will be tested, with it thought that there is possibly between a 10% and 15% rate of infection among migrant workers—which would result in 150 to 200 cases. 1/3rd of the migrant workers scheduled to be tested work at King Yuan, while another 1/3rd are from dormitories assessed to be high-risk.

New Taipei mayor Hou You-yi stated that traffic is up today 4.3% this morning, with a peak increase of 8.1% around 7 AM, which concerns him that current social distancing measures may be slackening. Nevertheless, according to Hou, the rate of infection at testing sites has declined to 1.6%, with increasing numbers of asymptomatic cases being found.

While there has been much speculation that the lower cases in past days could be due to lower testing over the weekend, Hou stated that testing sites did not see a substantial decline in visitors over the weekend, with New Taipei consistently reporting the most cases nationwide.

Taipei mayor Ko Wen-je stated that rates of testing sites in Taipei were 0.6%. Ko Wen-je said that there was a three-day lag between rapid tests and confirmed cases, but the trends are consistent between Taipei and those from stats from the central government. Differences in lag are sometimes due to differences in the brands used for testing, but the Taipei city government is adjusting this process. Ko believes rapid testing is more effective, but also said that speed for PCR processing is increasing. Similarly, Ko stated that he does not believe the death rate is an accurate measure of the current COVID-19 outlook, due to deaths reflecting earlier stages of the pandemic. K 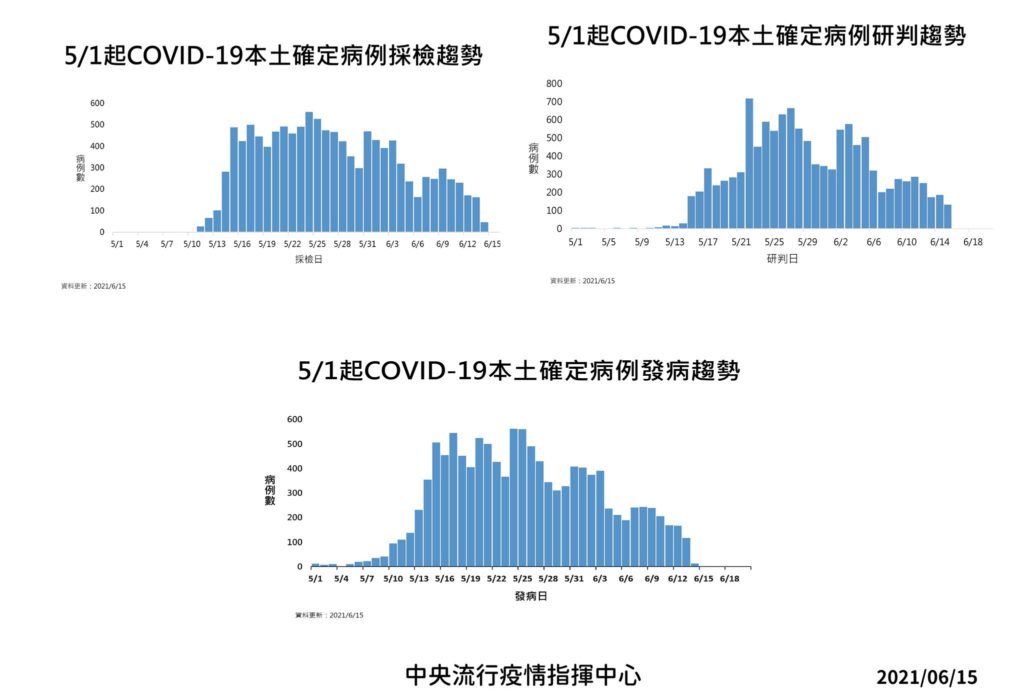 It is expected that the cram school industry will be heavy hit by the current outbreak. With 20% to 30% of tuition fees refunded due to lack of in-person teaching, 30% of cram schools in Taipei could potentially close.  Infections at the Xinhai police station has led to testing there.

The KMT has called for funds to be distributed to the families of the deceased who have died during the current outbreak. More than 400 have died so far. The KMT calls for family members of those who have died to receive between 100,000 and 2.5 million NT and individuals with confirmed COVID-19 diagnoses to receive between 50,000 and 300,000 NT. This would be a total of 2.8 million NT that would be allocated to such compensation in the COVID-19 relief budget. Otherwise, the KMT has stated that it has received petitions from more than 18 families in Wanhua.

Former vice president Annette Lu has criticized the Tsai administration, lashing out what is claimed to be delays in vaccine purchases, and claiming that Japan’s vaccine donation of 1.24 million AstraZeneca vaccines was too little. Lu, who served as Chen Shui-bian’s vice president, has been among those to accuse Tsai of falsifying her Ph. D credentials in past years, a conspiracy theory often seen as similar to birtherism in the US.

Reports suggest that Terry Gou’s Yonglin Foundation has received a letter approving the conditional import of BioNTech. The CECC is in discussions with the Yonglin Foundation regarding this documentation. Gou reportedly hoped for employees of FoxConn to first receive priority for vaccination, something that has proved controversial, since this could potentially pave the path for other vaccine purchasers setting conditions for how vaccines will be distributed.

The CECC is in dialogue with Gou about this documentation, but did not offer any new details today. Chen stated that vaccine supplies are limited nationwide, which will also lead to difficulties for private companies in obtaining vaccines.

With regards to an ongoing scandal in Taipei involving vaccinations defying the priority order, the CECC stated that while there will be fines for those who were vaccinated out of order, it will be the relevant authorities that decide whether to publicize who has been vaccinated in this way. Some TPP and NPP legislators are calling for this list to be publicized, although the Taipei city government has stated that some on this list received vaccines legally.

400 High Flow Nasal Cannula (HFNC) machines that have arrived in Taiwan are starting to be distributed. 200 machines have been sent out to 46 hospitals so far, including four hospitals on outlying islands. HFNC machines are used for oxygen supply for patients.

Responding to reports that there has been an outflow of travel to the US, the CECC stated that this was not demonstrated by statistics. Travel groups that have traveled to the US are not Taiwanese, with domestic travel groups still forbidden from operating during this time. Though there has been an increase in the number of flights to the US, this is primarily individuals returning to the US or students traveling to the US for school. The CECC also denied claims by the Chinese government that Taiwanese are traveling en masse to China to be vaccinated, with 62,000 flights vaccinated so far, stating that Taiwanese traveling to China were still 400 to 600 per day.

Mass vaccination has begun for the elderly, with vaccinations opened up to individuals over 75 years old, which is lowered to 65 years old for Indigenous. In most cities, vaccinations will begin for those above 85 years old. Taipei, Taichung, Hualien, Kaohsiung, and other cities will adopt a vaccination method originally developed in Japan to avoid contact, known as the “Umi-Machi style.” Out of 200 vaccinated in Hualien, only one fainted. Kaohsiung mayor Chen Chi-mai has been critical of a lack of social distancing measures maintained at vaccination sites, however.

Vaccinations of police are currently being carried out in Penghu over the current Dragon Boat Festival. Vaccinations in Kinmen are taking place at nine hospitals, and a number of local clinics. Four large vaccination sites are scheduled to be opened.

As a result of the efficient distribution of vaccines, the CECC expects to send out the next wave of vaccines soon. The CECC is aiming to vaccinate 75% of individuals above age 75 before opening up other categories.

According to the CECC, the Delta variant of COVID-19 has not been detected in Taiwan yet. It is still the Alpha variant that is circulating in Taiwan. New Taipei mayor Hou You-yi stated today that he expected to see the Delta variant eventually make its way to Taiwan, resulting in a need for a third dose of vaccinations. The CECC stressed today that the AstraZeneca vaccine is still sufficient to combat the Alpha variant of COVID-19 and that this lowers the odds of vaccination. Though the UK government has reduced the time between doses, this is in line with how each country has taken different measures to combat the spread of COVID-19. 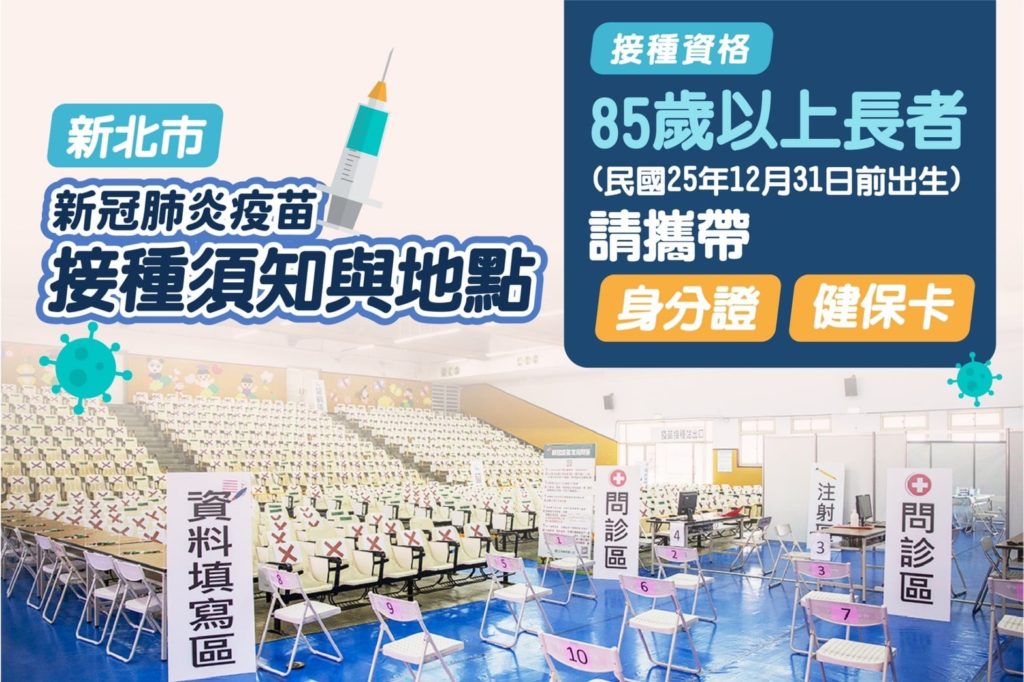 Vaccine allocations continue to be a key issue for the CECC, with the CECC having been accused by pan-Blue local governments of favoring local governments controlled by the DPP, such as Kaohsiung—in distributing vaccines or that prioritizing vaccination for public sector workers. Chen reiterated today that the current vaccination order prioritizes medical workers and frontline workers that could be exposed to COVID-19, in response to claims regarding vaccinations for public sector workers, as well as that this was one of the reasons for differences in vaccine distribution. Specifically, some cities originally only allowed for vaccinations for categories one to three while other cities allowed for vaccinations only for category one. 161,500 of these categories have been vaccinated. 10,100 vaccines sent to Kaohsiung were also allocated to the military.

Vaccine allocation in the next wave will take into account which areas are most heavily affected by COVID-19. Taoyuan, Taichung, Keelung, Changhua, and Miaoli will get 5% more vaccines, due to being at risk. Vaccine allocation will also take into account outlying islands of Taiwan, with Pingtung getting an extra 1,000 doses for Xiaoliuqiu, Taitung getting an extra 1,000 doses for Green Island and Lanyu, Kinmen receiving 2,000 doses, and Penghu receiving 2,000 doses. Taipei deputy mayor Huang Shan-shan, who yesterday got into a spat with Chen and stated she would not be picking up calls from him, today thanked the CECC for listening to the voices of local governments in its round of vaccine distribution.

The CECC is examining how to distribute vaccines in a way that does not require individuals to travel to receive vaccines. Consequently, the CECC called on local governments to assess their daily capacity for vaccine distribution, singling out Changhua—likely aiming to show bipartisanship, as Changhua is KMT-controlled—in particular for praise. On June 11th, Changhua reported its vaccination plan to the CECC, with 21 neighborhood sites, 20 hospitals, and 58 clinics, and vaccination teams sent to dialysis centers and long-term care centers.

After donating 1.24 million vaccines to Taiwan, Japan has announced that it also intends to donate vaccines to Vietnam, Indonesia, Thailand, the Philippines, and Malaysia, with one million vaccines to be donated to Vietnam on June 16th. More vaccines may also be sent to Taiwan. Chen stated today that Taiwan is thankful about vaccine donations from Japan to date and that it will continue to coordinate with the Japanese government.

Medigen stocks fell 8.7%.to 251.50 NT, something that is thought to be related to publicization of the efficacy rate of the Novavax vaccine from phase three trials, with an efficacy rate of 90.4%. Novavax and domestically manufactured Medigen vaccines are both protein-based vaccines.

When asked whether the CECC was attempting to purchase Novavax, Chen Shih-chung stated today that when there were further developments in vaccine acquisition, it would make announcements. 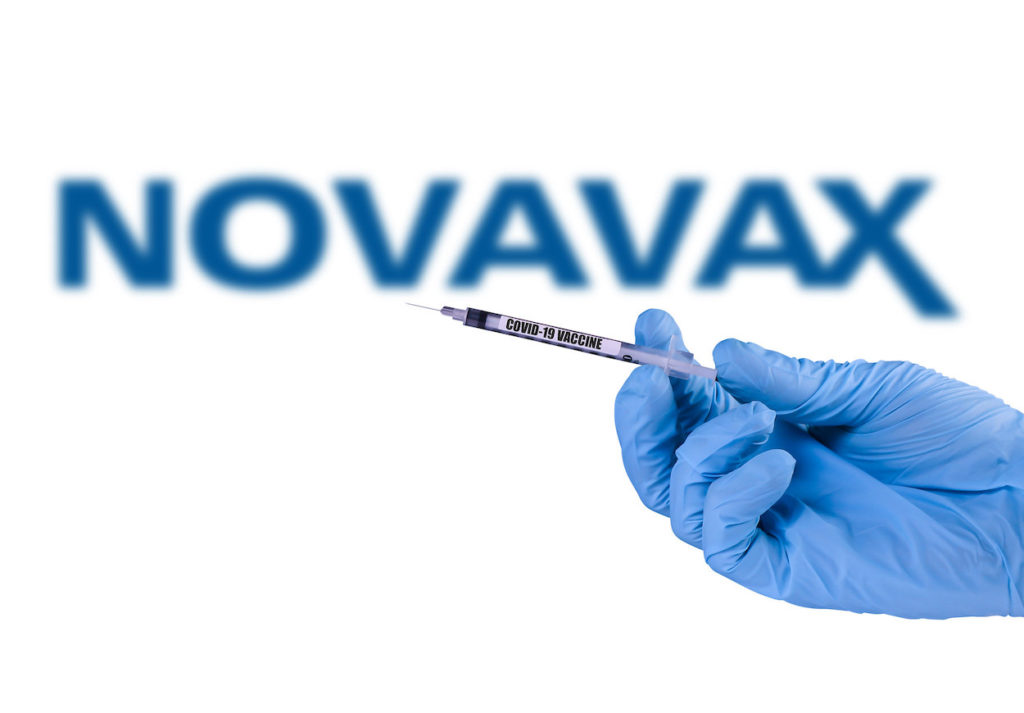 Reports state that the Philippines, Vietnam, Indonesia, Malaysia, and Thailand have expressed interest in Medigen vaccines after the unblinding of the phase two study last week. Although most public discussion of the issue has circulated primarily around whether international bodies will recognize the vaccine, interested buyers could potentially provide a boost to the domestic legitimacy of the vaccine. Nevertheless, the Philippines has subsequently denied reports that it sent a letter requesting Taiwanese vaccines, or that it is applying for an Emergency Use Authorization (EUA) for Taiwanese vaccines.

The CECC asserted today that it had not stated that it had received a letter from the Philippines requesting vaccine purchases, but that this was misreported by Japanese media. As such, the CECC urged care in reporting on the issue. Chen further emphasized that domestically-manufactured vaccines are still in the assessment period for EUA.