274 DOMESTIC CASES of COVID-19 were reported today by the Central Epidemic Command Center (CECC), with one imported case. This continues the third consecutive day of cases in the two hundred range, down from the spike in cases over the weekend. Twenty-five deaths were announced.

Cases displayed symptoms between May 14th and June 8th and are under age five to over age 90. New Taipei had 162 cases, while there were 63 cases in Taipei, continuing the pattern of the greater Taipei area having the most cases. There were fifteen cases in Taoyuan, twelve cases in Miaoli, ten cases in Keelung, three cases in Changhua and Nantou, two cases in Yilan, and one case each in Tainan, Chiayi, Taitung, and Hsinchu County. The situation in Miaoli seems stable, with increased testing after clusters that broke out among workers at electronics factories over the weekend. 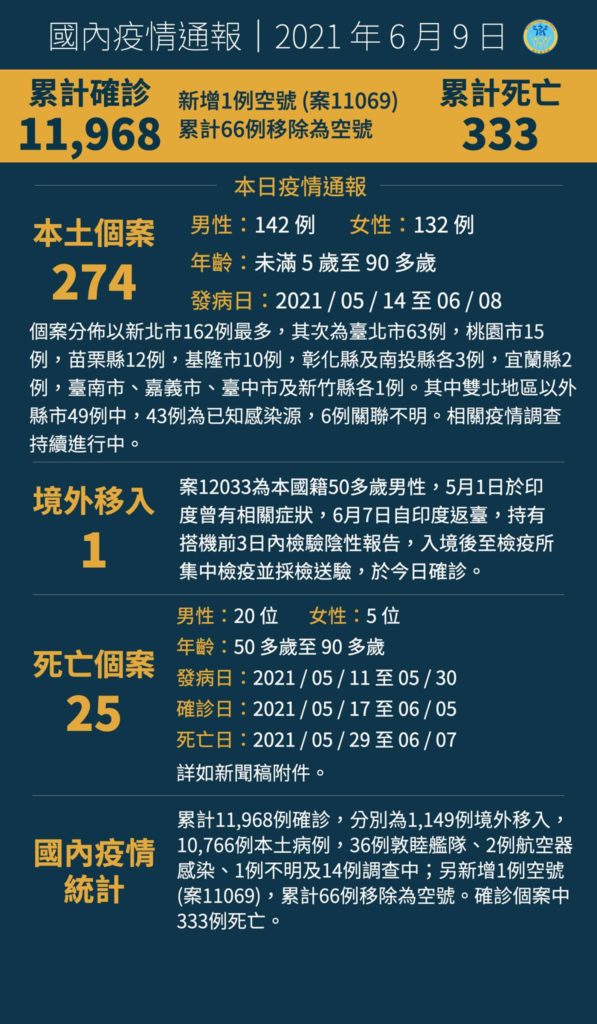 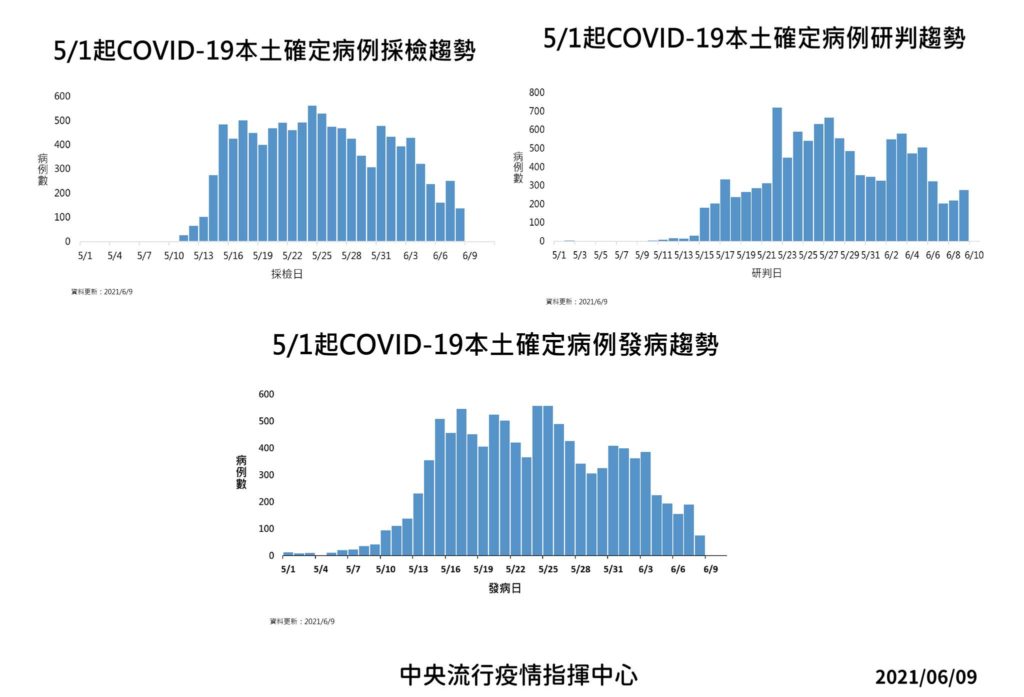 Infographic on the new cases today (left) and data released by the CECC (right). Photo credit: Ministry of Health and Welfare/Facebook

Workers at long-term facilities, residents of these facilities, and individuals undergoing dialysis will be moved forward in vaccination priority, though lists must be drawn up of who is eligible. Around 70% of medical personnel have now been vaccinated. The first batch of Moderna vaccines, which is 75,000 of the 150,000 doses that Taiwan has, will begin to be administered today. Firstline medical personnel will be prioritized in distribution. Moderna will be directly distributed to hospitals, without going through local health departments, because of the need for refrigeration.

Quarantine capacity has expanded to the point where in the greater Taipei area, individuals no longer need to wait at home after testing positive for COVID-19. There are 2,542 individuals, currently in hospitals, 1,486 individuals in centralized quarantine facilities, and 1,786 in strengthened quarantine hotels. 2,472 have been released from quarantine, while 1,260 have been sent back home to quarantine. To date, 35 of the 296 deaths that have taken place, or 10.8% of cases, died before arriving at the hospital, but it is hoped that increased speed putting patients in quarantine facilities will avoid this in the future.

Testing capacity has also expanded. Rapid testing is allowed, by clinics and corporations, so long as personnel know how to input data about test results into the centralized system. The government will pay for rapid tests that are positive and continue to pay for PCR tests. Talks with manufacturers for self-testing kits are undergoing, with Emergency Use Authorization passed for such imported testing kits. Testing capacity for PCR tests is at 48,000 tests per day, with a maximum capacity of 80,000 tests per day, which is up from originally conducting 27,600 tests per day. The Taipei government has stated that it hopes companies to rely on regular hospitals for testing so long as there is no special accommodations that need to be made, however.

There are no new updates on efforts by the CECC to purchase vaccines. There are plans to order more than 20,000 additional doses of remdesivir from abroad, though the CECC stressed that there are currently more than 1,000 doses and stock is still sufficient for the time being.

After controversy over the brother of the current Yunlin County magistrate, Chang Li-shan, being vaccinated despite not being on the priority list for vaccinations, the Taipei city government has announced that individuals that go out of vaccination order will be fined. This has led a clinic in Zhongzheng District, Taipei to be fined up to two million NT for vaccinating the general public, rather than category one to three individuals. Chang has defended her actions, stating that she lived with her brother and because as the head of local efforts to fight against COVID-19, family members are also at risk. Her brother, fellow KMT politician Chang Rong-wei, previously served as Yunlin County magistrate and was only just released from jail due to corruption charges. 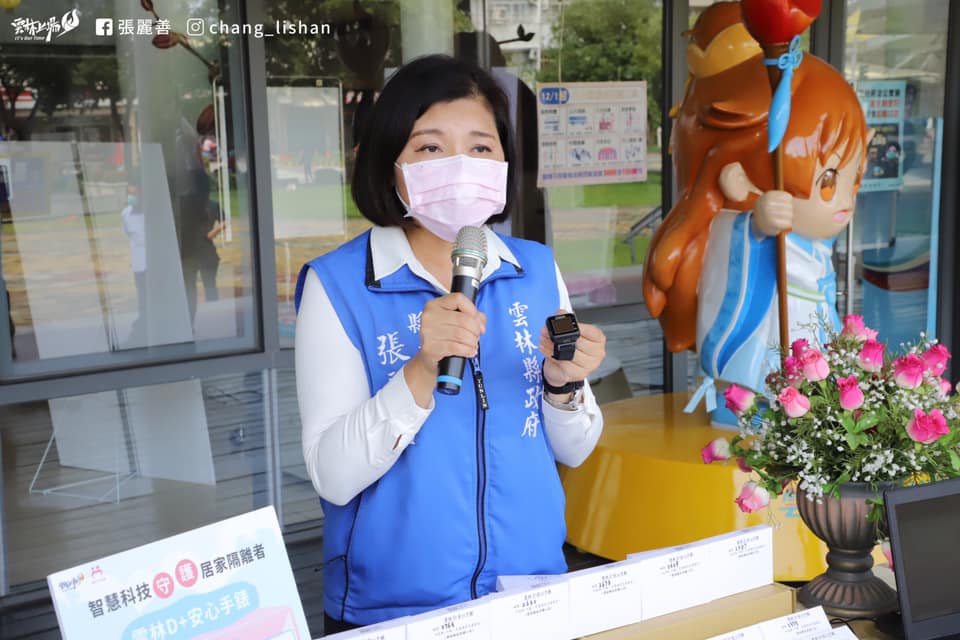 That being said, the CECC is not allowing for vaccinations for family members of medical personnel at present. Minister of Health and Welfare Chen Shih-chung also stated today that there will be fines for violations of vaccination priority order. The CECC previously indicated there were no laws punishing going out of order for vaccinations, so this reflects a strengthened stance in maintaining the priority order. Heads of other local governments, such as Taoyuan mayor Cheng Wen-tsan, have stressed that they will maintain the priority order set up by the central government and avoid favoritism in vaccine distribution.

Controversy continues in Miaoli after new restrictions rolled out by the county government forbidding migrant workers from going outside of their dormitories except when monitored by dormitory managers. This has been criticized as a restriction of fundamental freedoms of movement, at a time in which Taiwan is only at level three and not at a full lockdown. Similarly, there are reports of migrant workers in quarantine having 2,500 NT per day or more docked by their employers, despite subsidies of 1,000 NT provided per day by the government for workers quarantining.

The CECC declined to answer when asked yesterday if the Miaoli County government approved these measures with the central government before announcing them. However, the CECC stated today that the Miaoli County government decided to restrict movements of migrant workers on its own, as decided by county magistrate Hsu Yao-chang in a meeting and then announced by him on Facebook. The CECC called on the public to try and take care of migrant workers and remember what level three alert consists of, seeing as level three is not a full lockdown and individuals are still allowed to go outside.

According to New Taipei mayor Hou You-yi, the rate of infection at testing sites in New Taipei is 2.1% currently. There are reports of long lines of up to three hours and confusion about vaccination categories in Taipei. 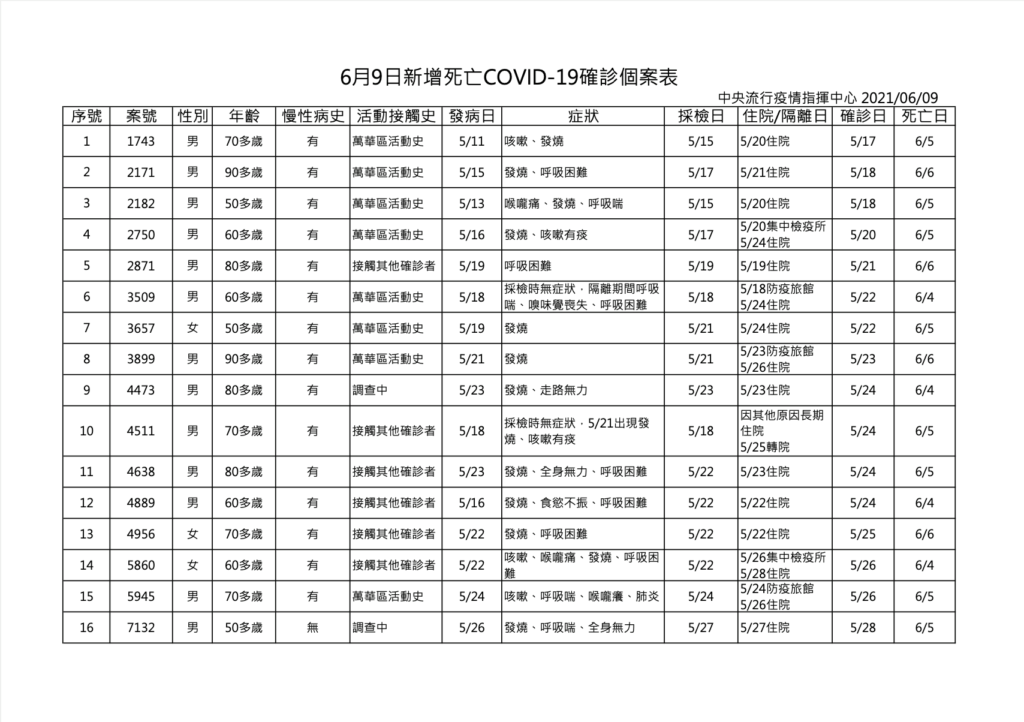 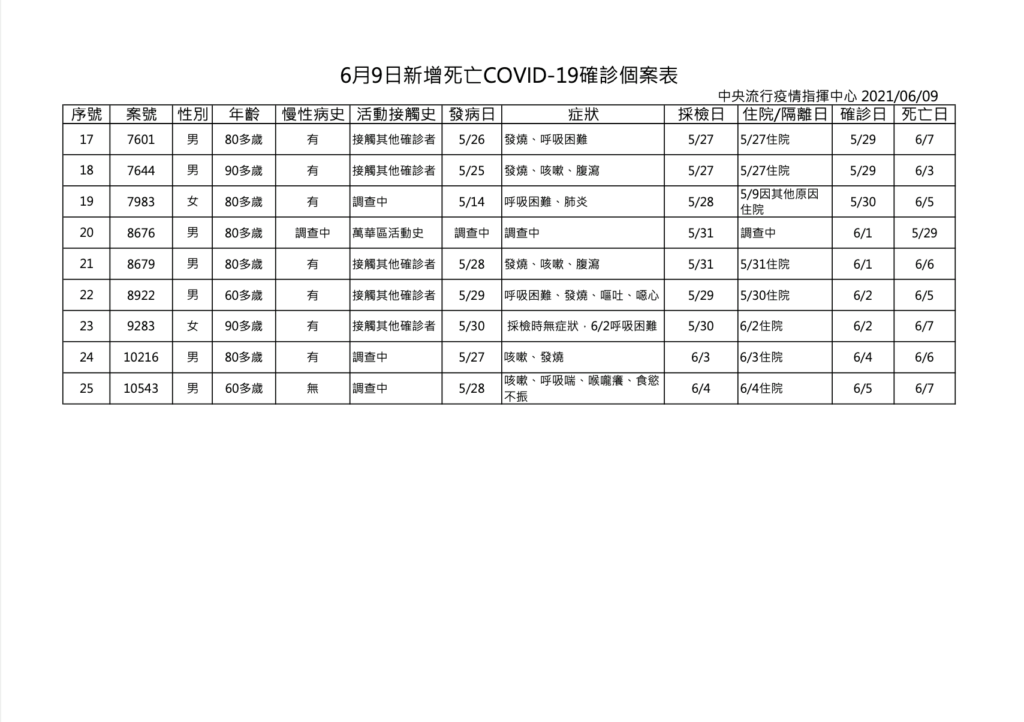 Information on the deaths released today. Photo credit: Ministry of Health and Welfare/Facebook

Taipei mayor Ko Wen-je stated today that, of 553 tests in Wanhua yesterday, there were only 17 positive results. Ko states testing trends reflect that people generally go to the doctor on weekdays, not on weekends, so this results in lower trends on the start of the week and an uptick in the middle of the week. He expects case numbers to decrease again in the next few days.

KMT legislators have continued to attack Minister of Health and Welfare Chen Shih-chung and Premier Su Tseng-chang in the Legislative Yuan, claiming that it is a failure on their part that vaccines have not arrived in Taiwan yet. Legislators to question Chen and Su in the legislature today include Lai Shyh-bao and Yang Chiung-ying. Similarly, Chen, Su, and Taiwan’s representative to Japan, Frank Hsieh, have had to respond to disinformation claiming that Taiwan receives fewer vaccines from Japan than it could have because Taiwan intended to rely on domestically manufactured vaccines.

Chen was also questioned about the possibility that domestically manufactured vaccines will not be internationally recognized today. Chen stated that this could not be ruled out, which is why the government intends to allow citizens to have a choice of which vaccine they will receive.

The Ho-hai-yan Rock Festival in Gongliao, which was originally scheduled to take place in June, has been cancelled due to the ongoing outbreak. The Pingxi Sky Lantern Festival has been postponed for a second time.

Rapid testing continues in the Hsinchu Science Park, with concerns that there could be clusters among workers there, similar to the clusters that broke out at electronics factories in Miaoli over the weekend. A testing station has been set up there for five days now, with it expected that up to 5,000 tests will be conducted today.

As companies are allowed to set up testing sites, FoxConn has been among those to do so. FoxConn also set up quarantine facilities. Of the 1,073 companies with more than 100 employees in New Taipei, 1/4th of them are located in areas thought to be hot spots, with more than 83,000 workers that could be affected. 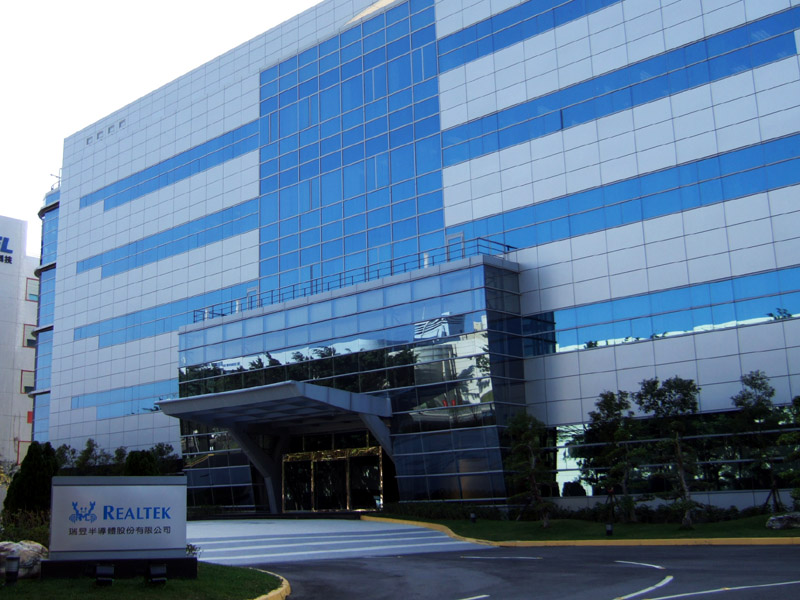 With migrant worker dormitories called on to expand the space available, to avoid crowded conditions that might lead to the spread of COVID-19, it has been found that 21% of dormitories have insufficient space in New Taipei.

With news that South Korea is considering a travel bubble with Taiwan, Chen Shih-chung stated that Taiwan will respect COVID-19 measures by the South Korean government, but did not offer more details.