372 NEW DOMESTIC cases, along with 177 cases from the backlog were announced today at the Central Epidemic Command Center’s (CECC) daily press conference. There were also 12 deaths reported.

Today’s cases are an uptick from yesterday, which reported 262 new domestic cases, along with 65 cases from the backlog. It is thought that the backlog will mostly be cleared in the next few days, due to increases in speed processing backlog cases, with the CECC currently checking with hospitals to see if any cases have been unaccounted for 2/3rd of hospitals have been checked with.

One-day upticks are not significant—it is more helpful to look at overall trends, seeing as today’s higher cases or the past few day’s lower cases may be due to contingent reasons, such as individuals being reluctant to go out and be tested due to rain, 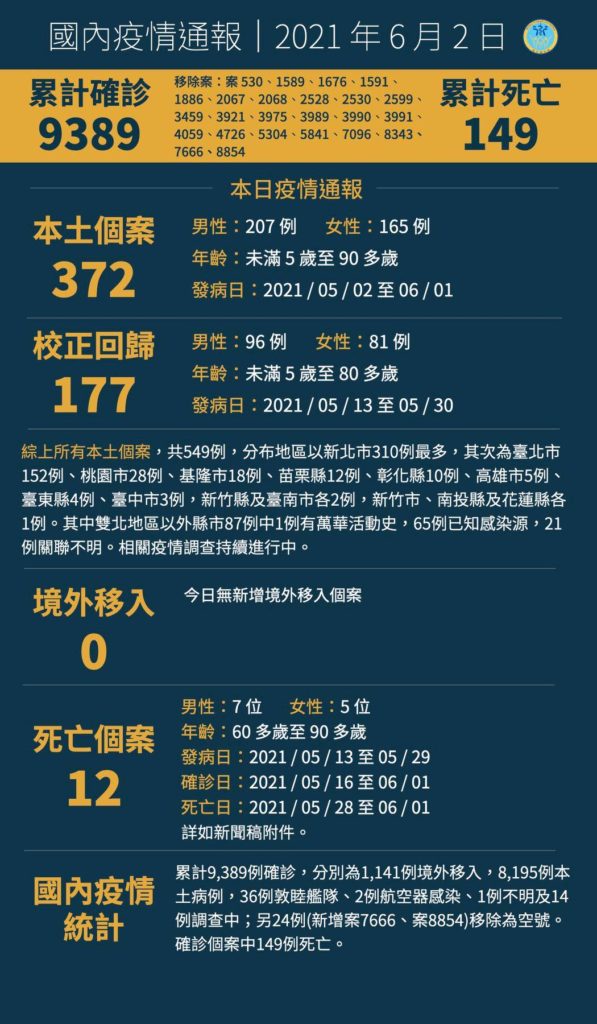 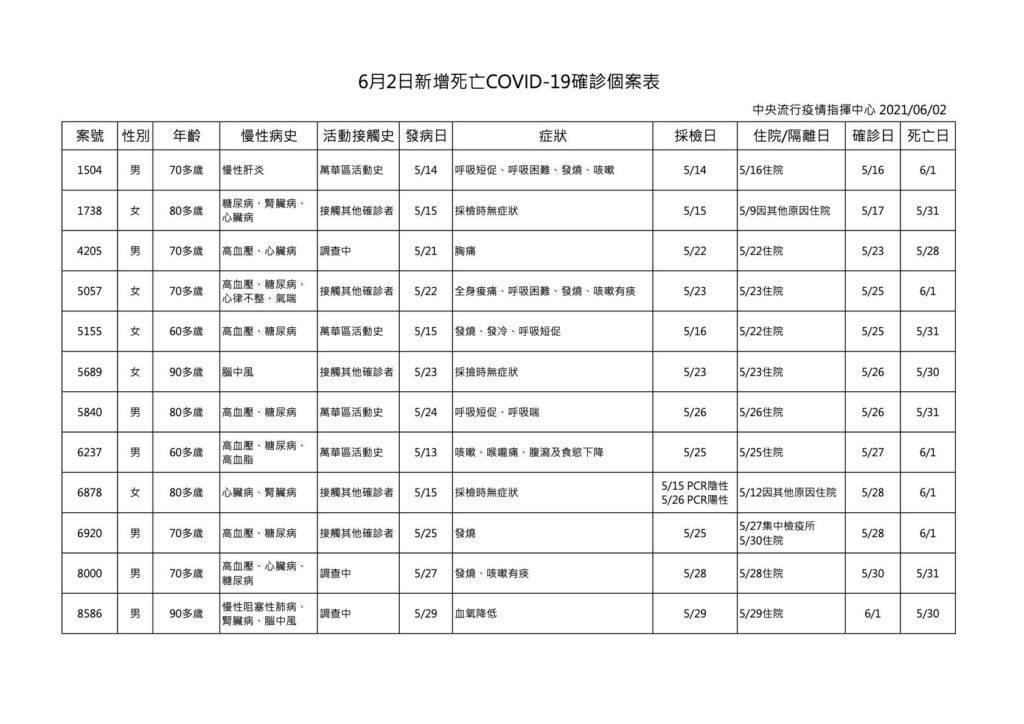 Infographic on the new cases from today (left) and information on the new deaths (right) released by the CECC. Photo credit: Ministry of Health and Welfare/Facebook

Nevertheless, Minister of Health and Welfare Chen Shih-chung took the opportunity to remind members of the public that this reminds why COVID-19 prevention measures still must be maintained. The CECC otherwise stated that it is not clear whether this uptick is because of cases spreading again, or because of increased speed processing testing results, but that it will observe over the next two days. There are periodic upticks in cases, despite the overall declining trends.

Of the new cases and the backlogged cases, the majority of cases were in New Taipei, with 310 cases. Taipei had 152 cases, Taoyuan had 28 cases, Keelung had 18 cases, Miaoli had 12 cases, Changhua had ten cases, Kaohsiung had five cases, Taitung had four cases, and Taichung had three cases. Two cases were in Hsinchu County and Tainan, with one case each in Hsinchu City, Nantou, and Hualien. 87 cases were related to activities in the greater Taipei region, with one case linked to travel history in Wanhua. 65 cases had other causes, while 21 cases had unknown causes.

New Taipei and Taipei nearly doubled in cases compared to past days, with particular scrutiny likely to be centered on New Taipei, where the most cases are. Taipei mayor Ko wen-je urged the public not to disproportionately focus on the one-day uptick, stating that rates of infection at testing sites showed that community spread was still occurring, but that it was under control. New Taipei mayor Hou You-yi pointed to consistent rates of infection at testing sites to show that the overall situation had not worsened. If the situation worsens, it is probable that local governments in Taipei and New Taipei will try to shift blame to the central government, while the central government is less able to criticize local governments and must maintain the appearance of fairness toward central governments in order to ensure that they cooperate with its policies.

The CECC stressed the safety of the AstraZeneca vaccine at the press conference today, citing recent studies, given fears that remain about the vaccine causing blood clots.

A patient at the Ren’ai Hospital that was confirmed with COVID-19 smashed the glass door of the emergency room today at 3:30 AM, as a result of apparent emotional instability, and later ran off at 9 AM. Police are still searching for him. This comes on the heels of an incident earlier this week involving a COVID-19 patient stabbing three nurses at the Shangho Hospital, trying to resist being quarantined after he was confirmed to have COVID-19. The CECC confirmed the Ren’ai Hospital case’s arrest at 1:30 PM at his home at its press conference. 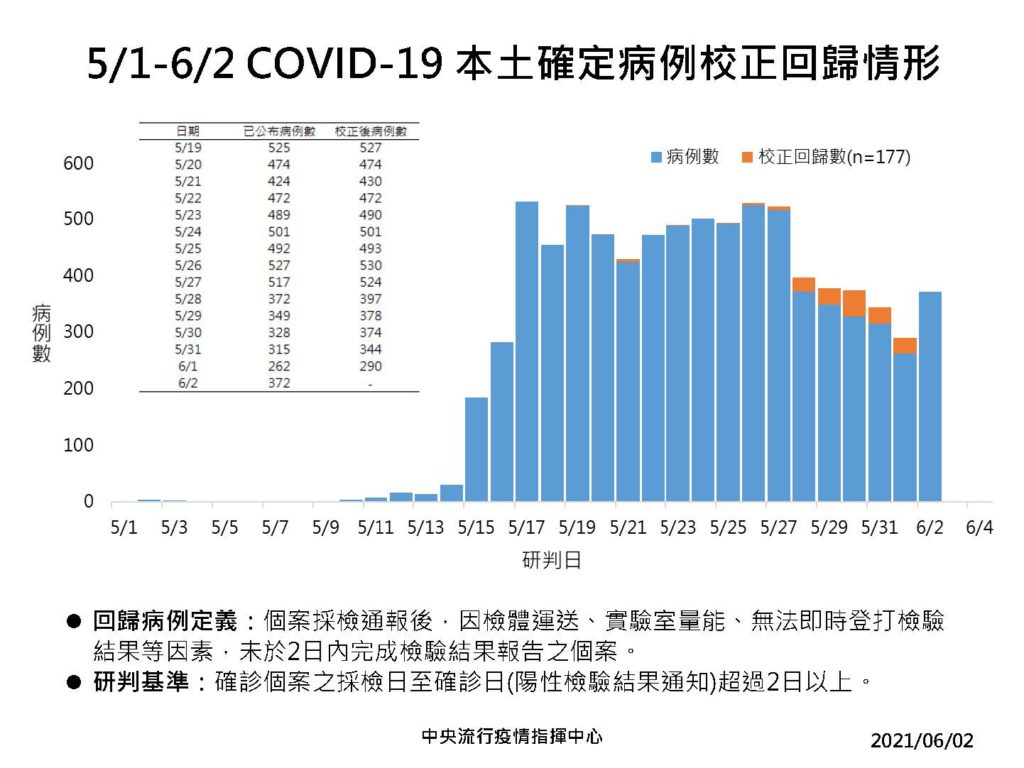 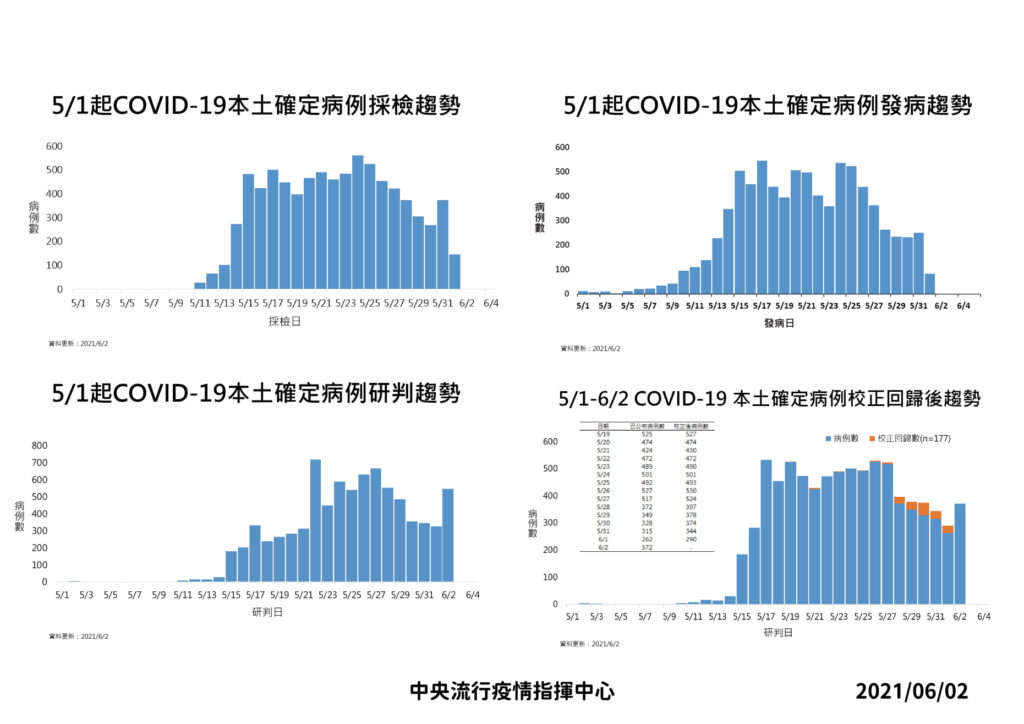 Further data released by the CECC. Photo credit: Ministry of Health and Welfare

Likewise, 25 people have tested positive for COVID-19 through rapid testing at an elderly care home facility in Tucheng in New Taipei. This took place after the CECC confirmed the diagnosis of an 80-year-old resident of the care home, with New Taipei mayor Hou You-yi pointing to this cluster to explain the uptick in cases, while reassuring that the situation was still mostly under control. The CECC has been called on to address how elderly care facilities are vulnerable to the spread of COVID-19. As the elderly are a particularly vulnerable group, the CECC is consulting with vaccination experts to consider whether to move the elderly forward in terms of priority for receiving vaccinations.

Industry groups will be allowed to set up vaccination centers if this will vaccinate more than 1,000 individuals, as with vaccination centers to be set up in neighborhoods. The CECC is taking volunteers who will be to conduct vaccinations, with 7,700 individuals having already signed up. Chen stressed that members of the public can get vaccinated in their local areas and do not need to go back to their place of household registration for vaccination, likely hoping to avoid unnecessary travel, or issues with allocation.

An online system similar to the one set up by Audrey Tang for distributing masks will be used for registering for vaccinations. At least Taipei mayor Ko Wen-je has stated that he is relatively on the same page as the CECC in terms of plans for conducting vaccinations, even if he has attacked delays by the Tsai administration in obtaining vaccines or the Tsai administration’s plans to rely on domestically-manufactured vaccines because of difficulties obtaining vaccines from abroad.

Many questions today at the CECC press conference centered around vaccine purchases by private organizations, the most prominent of which would be FoxConn CEO Terry Gou’s Yonglin Foundation. The Tzu Chi Buddhist religious organization is reportedly hoping to purchase vaccines, with reports that the Red Cross is also looking into purchasing vaccines. This occurs after the Fo Guang Shan Buddhist organization stated it would purchase 500,000 Johnson & Johnson vaccines earlier this week. As two of Taiwan’s four major Buddhist organizations have expressed interest in vaccine purchases, this has led to speculation as to whether the other two would seek to purchase vaccines, or whether other religious groups, such as Christian organizations, might get involved.

Similarly, Chang Ya-chung of the Sun Yat-Sen School is claiming that the ten million vaccines (5 million BNT and 5 million Sinopharm supposedly) the Beijing Cross-Straits Eastern Cultural Center intends to send are ready to be sent over anytime. As such, he calls on the CECC to stop bothering him about documentation about the origin of the vaccines and in order to maintain quality control, claiming that this is only intended to make life difficult for him. Chang claims that the vaccine can be sent over and he can simply hand them over to the CECC, except for the difficulties that the CECC is creating.

However, Johnson & Johnson stated that it only sells to governments today, raising questions for Fo Guang Shan’s vaccine purchase plans, as well as the purchase plans by the aforementioned groups.

According to Chen Shih-chung, Gou and the Fo Guang Shan have submitted the most documentation so far. However, Gou still lacks the authorization document for the vaccine purchase that is necessary to go ahead with the purchase. More documentation arrived in the last day from the Beijing Cross-Straits Eastern Cultural Center but this is still insufficient. The center previously sent a copy of the documents, but not the actual documents yesterday. It has also emerged that the donor that Chang claims will donate the vaccine heads a television entertainment company with only 440,000 NT in capital.

Yet Chen did not take a strong stance that Johnson & Johnson’s stating they would only sell to governments indicated that other groups would meet with similar obstacles, publicly stressing that the government was willing to work with groups hoping to purchase vaccines. Chen is likely hoping to avoid the Tsai administration being accused of refusing to work with corporations and organizations of the opposite political camp, such as FoxConn, the Yonglin Foundation, and the Sun Yat-Sen School, or of deliberately sabotaging their efforts to purchase vaccines.

When questioned about BioNTech’s contract with Fosun, it’s apparent Greater China distributor, Chen stated that he had never seen the vaccine, but this appears to include China. Moreover, when asked about newer, more virulent strains of COVID-19 recently detected, Chen stated that international vaccine manufacturers were researching how to adapt to these new strands and that the CECC would continue to be attentive, with domestic vaccine manufacturers urged to do the same.

Chen stated that he did not know which brand of vaccine would arrive in Taiwan at the end of the month. Chen may be hoping to avoid speculation, or this could imply that the vaccines set to arrive are from COVAX, which uses a number of brands and distributes based on stock. Previously, Chen called on COVAX not to see any interference from China or other powers that led vaccine shipments to Taiwan to be canceled.

The annual Amis Harvest Festival has been canceled, at the request of the government, due to the ongoing pandemic.

An assistant in the office of KMT legislator Wen Yu-hsia has been confirmed with COVID-19. Four cases have been linked to a breakfast shop in Kaohsiung, consisting of family members of the manager of a well-known breakfast store. Four students at Chinese Culture University also tested positive for COVID-19, resulting in 160 students being tested for COVID-19, and university dormitories being disinfected.

Germany’s representative to Taiwan, Thomas Prinz, has stated that the German government is trying to facilitate communications between BioNTech and Taiwan. However, according to Prinz, potential vaccine purchases are to be settled between the two parties and this is out of the control of the German government. An Italian newspaper, La Verità, has alleged Chinese interference that led to the obstacles Taiwan has had purchasing vaccines from Germany.

With traditional markets proving an area of particular concern regarding efforts to fight COVID-19, New Taipei mayor Hou You-yi has stated that markets must maintain social distancing measures of 2.25 square meters between each person. There are 172 markets in New Taipei and 26% of confirmed COVID-19 cases have been to markets. Similarly, there are 50 markets in Taoyuan, with Taoyuan mayor Cheng Wen-tsan stating that infections of markets will take place.

Taipei mayor Ko Wen-je continued today to insist that the TaipeiPASS system set up for use in Taipei is preferable to the QR code system set up by Audrey Tang and rolled out by the central government nationwide, despite criticisms for emphasizing a Taipei-specific contact tracing system during national efforts to fight COVID-19. Ko claimed that the TaipeiPASS system was less expensive, because it did not rely on text messages, while it offers more information on stores that one visits. 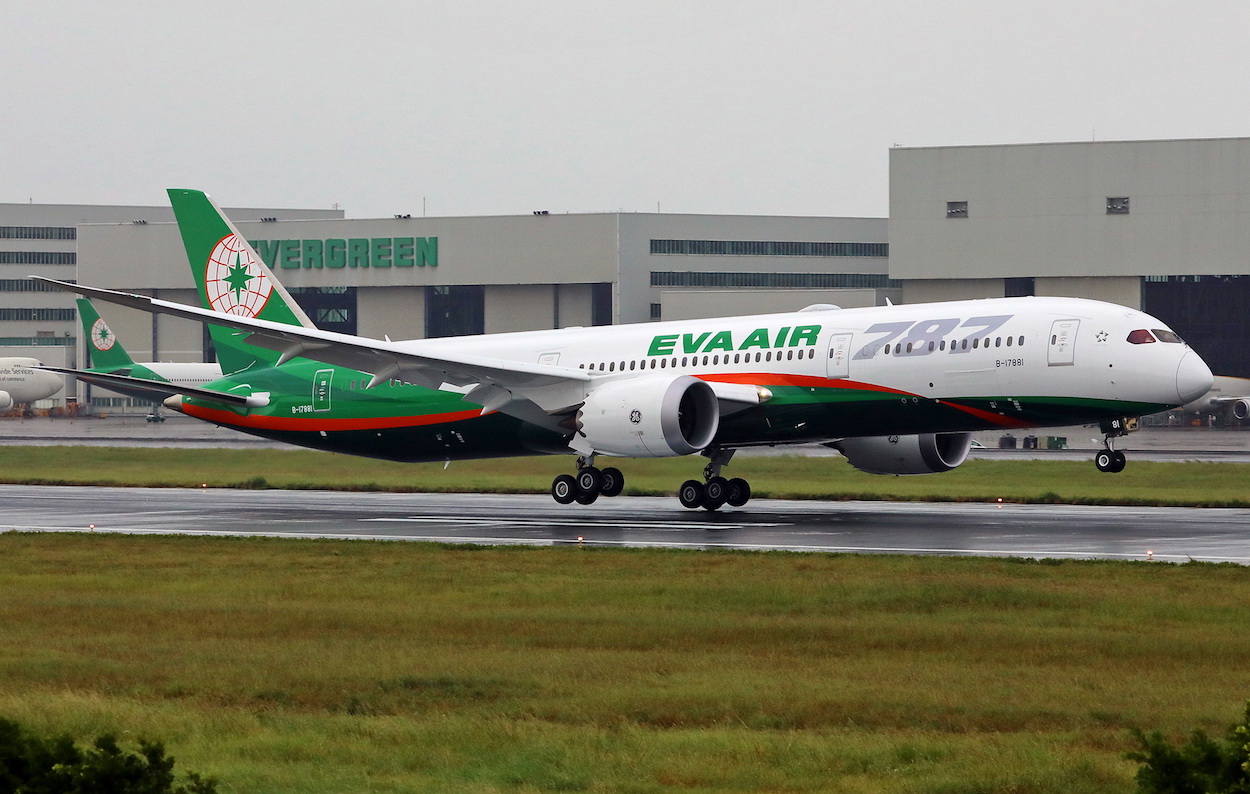 Quarantine measures for airline pilots have been readjusted to five days of quarantine, followed by nine days of self-health management. This was previously lowered to three days of quarantine, followed by eleven days of self-health management, but this is accused of having led to a cluster of COVID-19 cases among China Airlines and at the Taoyuan Novotel International, a quarantine hotel that many pilots stayed at.

There has been an uptick in individuals traveling from Taiwan to the US, resulting in EVA Air increasing its flights to Los Angeles from three flights to seven flights per week. 20% of seats were originally full, but this increased to 60% or 70% in mid-May, with business class seats doing particularly well. This occurs after a tour agency attempting to advertise for tours of the US for travelers to get vaccinated was blocked by the Tourism Agency, seeing as tour groups are currently forbidden to travel.