THE CENTRAL EPIDEMIC Command Center (CECC) announced 262 domestic, 5 imported cases, and 65 cases from the backlog today at its daily 2 PM press conference. It is expected that the backlog of cases will be cleared in the next two days, with 6,437 tests remaining to be processed, which are mostly thought to be negative tests that have not been added to the system. Thirteen deaths were also reported.

Of the new cases and the backlogged cases, this is 166 cases in New Taipei, 87 cases in Taipei, 23 cases in Taoyuan, 12 cases in Changhua, ten cases in Taichung, and eight cases in Keelung. There were five cases in Yilan, four cases in Chiayi, three cases each in Hualien and Taitung, two cases in Miaoli, and one case each in Kaohsiung, Hsinchu, and Penghu. Cases reported symptoms from May 20th to May 30th. 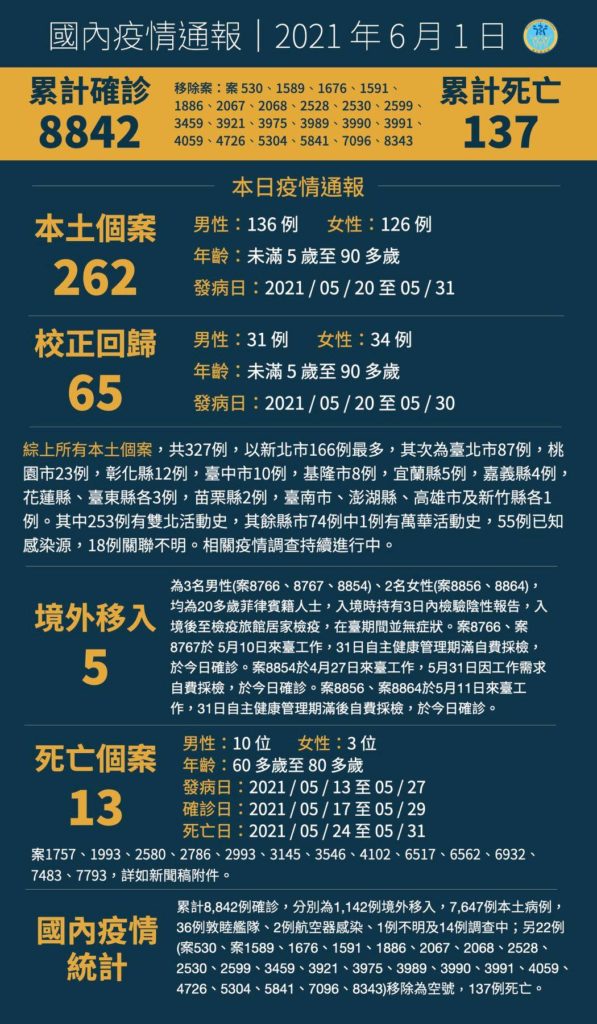 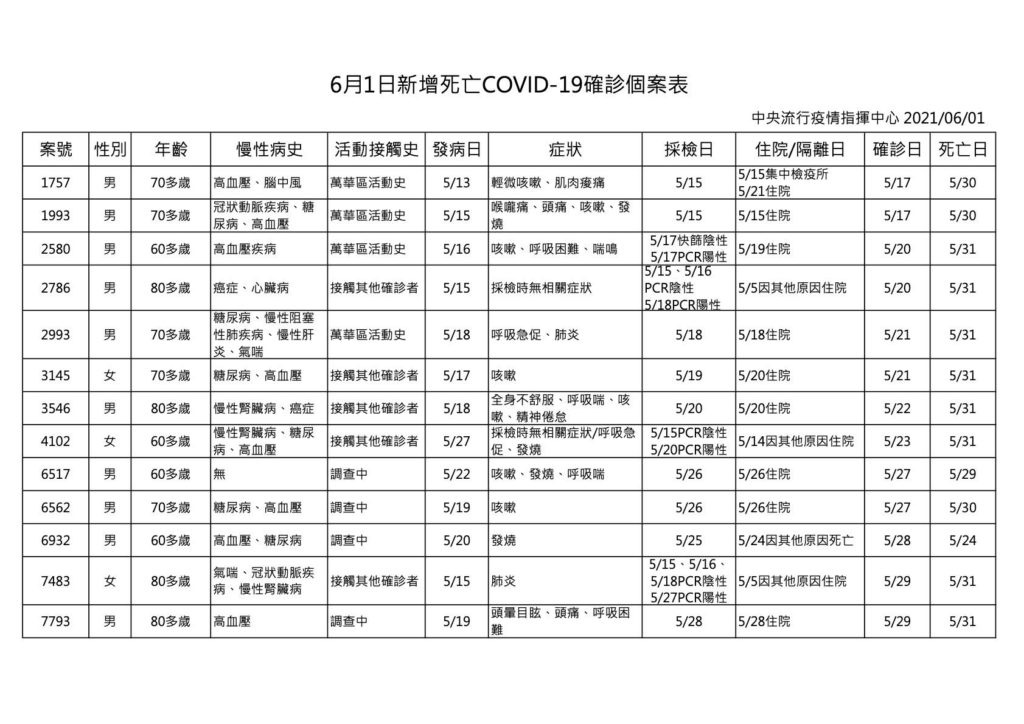 Infographic on the new cases today (left) and the number of deaths (right) released today. Photo credit: Ministry of Health and Welfare/Facebook

224 patients are on breathing machines. From April 20th up until now, 16% of COVID-19 cases are serious, which increases to 30% for individuals above age sixty.

The number of cases are steadily on the decline. While Minister of Health and Welfare Chen Shih-chung stated that Taiwan’s Rt value is on the decline, he stressed this is due to past efforts over the past fourteen days, and that this does not mean that efforts to prevent the spread of COVID-19 should be relaxed. It is possible that there may be some delay in reporting deaths, based on backlogs in past days.

As it is feared that traditional markets are particularly susceptible to being places where COVID-19 spreads, many traditional markets have been called on to maintain a rotational system in which vendors open based on the odd or even numbers of their addresses or floor numbers, and visitors can only enter depending on whether their national ID ends with an odd or even number. Traditional markets that cannot maintain such measures have been called on to close. As such, Hou announced this afternoon that the Min Xiang Market in Banqiao will be closed for three days, seeing as it has not been able to maintain social distancing measures.

Taipei mayor Ko Wen-je stated that while cases are on the decline, some testing sites still report increases in positivity rates. According to Ko, the Taipei city government is currently looking at the example of Tokyo to determine what to do next, with Tokyo having undergone five periods of lockdown in between periods of opening up in order to avoid economic damage. Ko is also calling for increased use of the TaipeiPASS system to allow for contact tracing, but he is accused of trying to promote the TaipeiPASS system to compete with the QR code system rolled out by Audrey Tang and the central government, which may make contact tracing more difficult if this is divided between different systems.

Many questions directed at the CECC today were about vaccine purchase plans from corporations and religious groups. FoxConn CEO Terry Gou continues with plans to purchase vaccines which he claims will be BioNTech vaccines manufactured in Germany, intending to spend more than 10 billion NT on the purchase. Yet Li Bingying, a member of the CECC’s advisory group of experts, has stated that he heard the vaccines that Gou intends to purchase are close to expiry. Gou delivered another set of documents to the Tsai administration today, with Minister of Economic Affairs Wang Mei-hua stating that she had spoken with Gou by telephone yesterday. 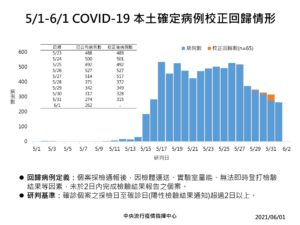 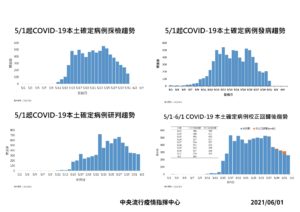 Data released by the CECC today. Photo credit: Ministry of Health and Welfare/Facebook

The CECC has reported six applications from groups hoping to purchase vaccines so far, while ten groups that expressed to the media that they would like to purchase vaccines have not submitted applications. The CECC has stated that all six of these applications were lacking the necessary documentation, however. KMT legislators such as Lai Shyh-bao have accused the Tsai administration of favoring domestic vaccines because of holding stocks in domestic vaccine companies, so as to personally profit.

When asked, Chen Shih-chung stated today that of the groups that have applied to purchase vaccines it is Terry Gou’s Yonglin Foundation and the Fo Guang Shan Buddhist religious organization that has provided the most documentation, diplomatically thanking Gou in his comments. The Beijing Cross-Straits Eastern Cultural Center, a Chinese organization that claims that it intends to donate five million BioNTech vaccines and five million Chinese-manufactured Sinopharm vaccines through the KMT-affiliated Sun Yat-Sen School, has only provided a copy of documentation, not the actual documents. Nevertheless, if the Beijing Cross-Straits Eastern Cultural Center sends Chinese vaccines, import restrictions will still remain—this will occur even if Chinese vaccines are approved by the World Health Organization.

As it is expected that two million vaccines will be delivered to Taiwan in June, which need to be refrigerated at low temperatures, the CECC is currently working on plans to distribute vaccines across Taiwan. The CECC will report back with more details tomorrow.

The CECC also stresses that the stock of medical supplies in Taiwan is adequate, likely responding to reports that hospitals such as the Mackay Memorial Hospital were reusing N95 masks. The CECC states that some hospitals had fewer stocks and so it is trying to coordinate distribution.

Chen was also asked about regulations rolled out by the European Union (EU) restricting travel to individuals with approved vaccines. Chen stated that such regulations were recommendations for EU member states, not restrictions, though individual countries that are member states of the EU may have their own travel policies. This raises the possibility that if Taiwanese domestically-manufactured vaccines are not internationally recognized, this could lead to difficulties traveling for Taiwanese.

KMT city councilors in Taichung held a protest outside of the city government today, honking the horns of their cars while shouting slogans, calling on the central government to provide vaccines. Some have criticized this as an unnecessary public gathering at a time in which there are restrictions on public gatherings due to the level three alert, although the KMT has stated that this protest involved less than ten people.

Enrollment for elementary and junior high schools has been moved online. 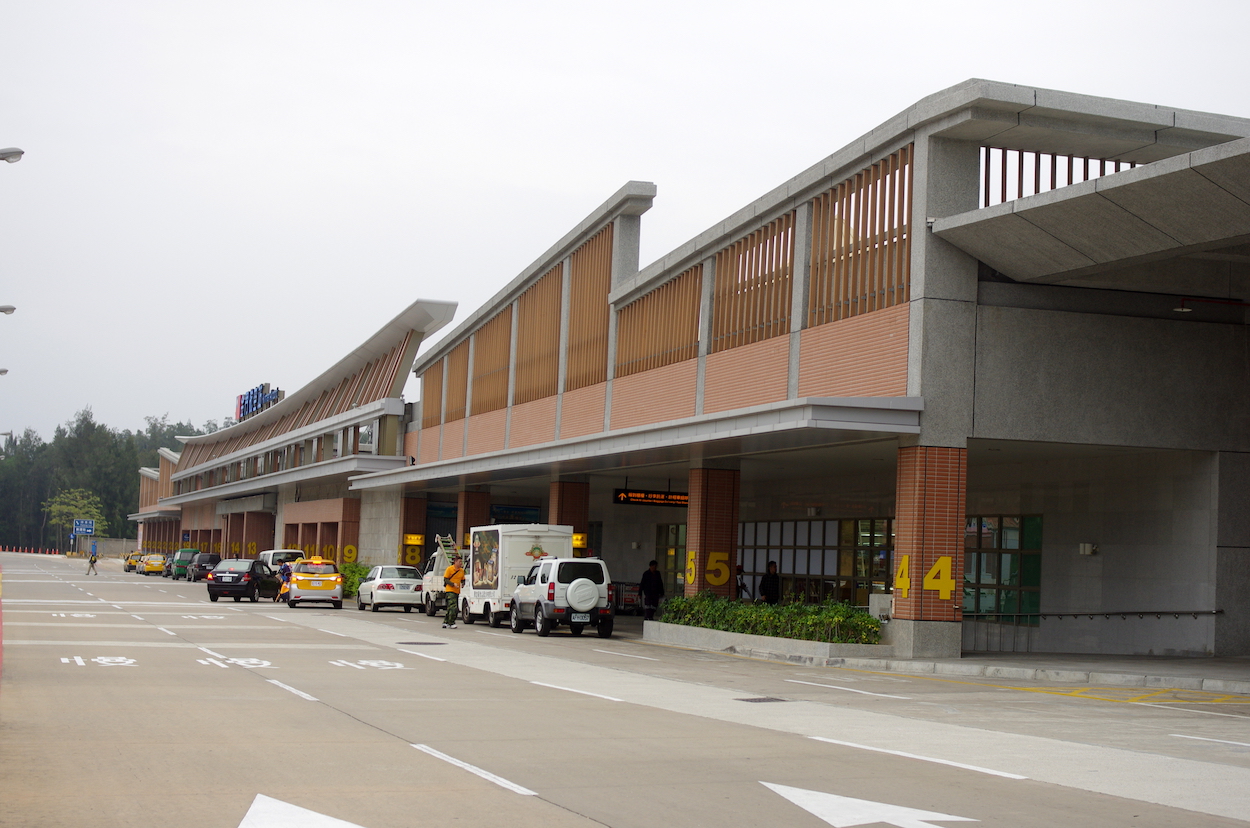 Starting tomorrow, before individuals are allowed to travel to outlying islands of Taiwan, health declarations and negative test results will be required. Rapid testing stations have been set up in airports in Taipei, Taichung, Chiayi, Tainan, and Kaohsiung. Although the central government previously overruled an attempt by the Kinmen County government to require testing results before travel to outlying islands, the CECC announced that negative tests would be required before travel in a policy reversal yesterday. The policy reversal has not been taken well by some of the governments that were previously overruled.

Political contestation about the government’s decision to skip phase three testing for domestically-produced vaccines continues. Some concerns have been raised about the complexity of the process required to manufacture the vaccine currently under development by United Biomedical.

With efforts to improve testing outside of Taiwan, three testing stations have been set up in Hsinchu. Another wave of 3,500 doses has been sent to Hsinchu. The Chiayi County government, which received 4,900 doses last week, has received another 3,000 doses, and plans to seek 11,000 doses at present to cover groups eligible for vaccination.

The Keelung government has announced new measures intended to aid those financially hit by the current outbreak, with 500 short-term public sector vacancies announced for those in need, and stipends that could last up to a year for those without work for over thirty days, not to exceed the maximum insurable salary for their wage bracket and the minimum wage. The Pingtung County DPP chapter has called on the central government to provide more funds to assist parents who need to take care of children during the outbreak. The Legislative Yuan doubled the budget for economic measures to assist those affected by the outbreak to 840 billion NT yesterday.

With a sharp increase in deliveries after indoor eating was banned last week as part of the “strengthened” level three alert declared by the CECC, Foodpanda has set a minimum order of 99 NT for deliveries. This is in order to cope with demand.

Well-known fantasy literature translator Lucifer Chu, also known as a prominent advocate of the death penalty among other vocal views, sent funeral flowers to the central government in order to protest the Tsai administration’s COVID-19 response. Minister Chen was asked numerous times about Chu’s protest during the CECC press conference today and shrugged off the questions multiple times.

Speech given by Tsai Ing-wen by livestream this yesterday

Chinese disinformation about COVID-19 is on the rise, with state media reporting bed shortages in Taiwan, resulting in outdoor hospitals similar to the “square hospitals” used in Wuhan during the initial COVID-19 outbreak being set up. Available beds have been a continued point of contention between local governments, with the central government stating that bed capacity is sufficient, while local governments claim shortages. Likewise, journalists from pan-Blue outlets have continually asked CECC officials about setting up “square hospitals”, showing how such lines of questioning may dovetail with disinformation from Chinese state media. As it has been reported that Want Want Group-owned media outlets such as the China Times, CtiTV, and CTV directly allow China’s Taiwan Affairs Office to have a say in what articles they run and their editorial direction, it is possible that this continues during the current outbreak.

Tsai Ing-wen spoke to the public yesterday afternoon by livestream in a brief, eleven-minute speech. Tsai urged people to avoid going out and to maintain measures against COVID. Likewise, Tsai states that the Executive Yuan has set up a window to dialogue with corporations, religious organizations, and local governments about vaccine purchases, but that domestically-produced vaccines are necessary now.

In this, Tsai emphasized that Taiwan is like many countries in pursuing domestic vaccines, and that vaccines will pursue international standards, and that Taiwan’s medical experts involved in vaccine development should not be denigrated without proof. According to Tsai, the government is working with Audrey Tang and others to set up a vaccine distribution system, which is currently being tested.

Tsai’s speech was likely aimed at avoiding being accused of being silent during this current outbreak and to respond to attempts by FoxConn, local governments, and Fo Guang Shan to purchase vaccines. The NPP has called for Tsai to take a more proactive leadership role in the fight against the current outbreak, with Tsai having remained behind the scenes and primarily allowed Minister of Health and Welfare Chen Shih-chung to announce new policy.