Fifteen deaths were announced. Three of the deaths previously had negative testing results. Of the new cases announced today and the backlog cases, 171 were in New Taipei, 122 in Taipei, 27 cases in Taoyuan, and ten cases in Changhua. There were five cases in Taichung, three cases in Keelung and Miaoli each, two cases in Hsinchu, and one case each in Kaohsiung, Penghu, and Hualien. 293 cases were linked to activities in the greater Taipei area, while two of the cases outside of the greater Taipei area were linked to places in Wanhua. 46 cases had other causes, while six cases had unknown causes. 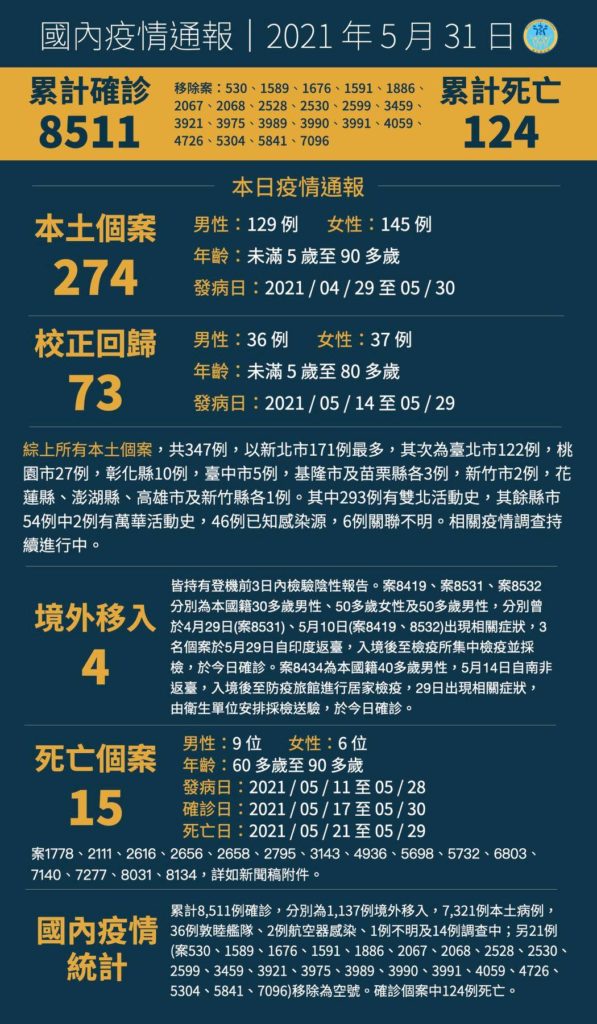 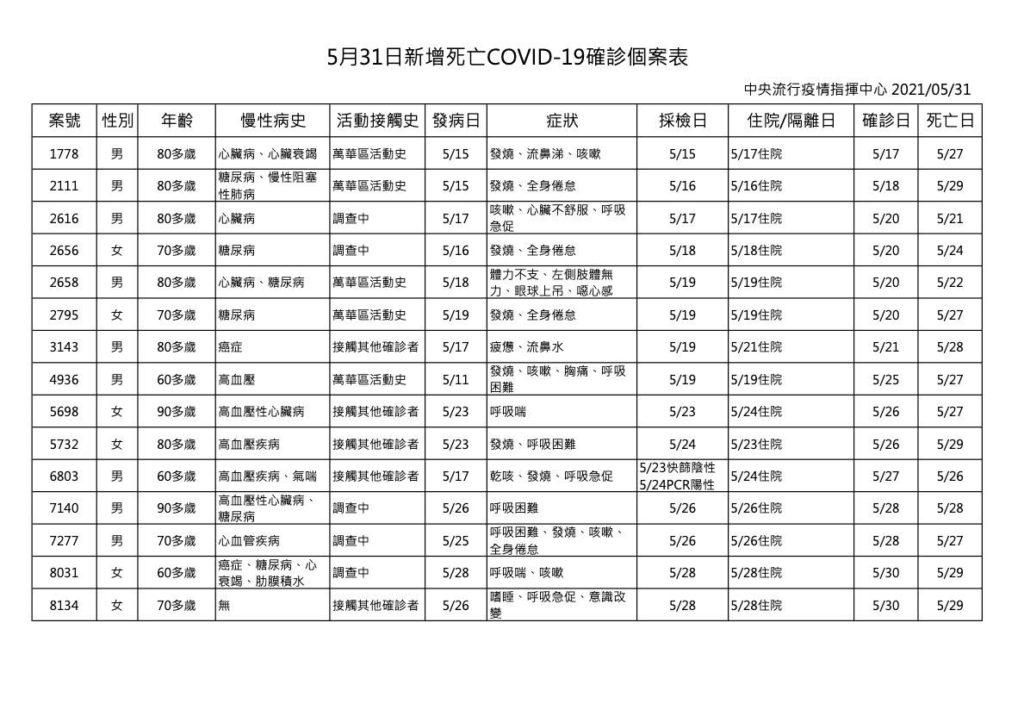 Infographic released by the CECC on the new cases today (left) along with information on today’s reported deaths (right). Photo credit: Ministry of Health and Welfare/Facebook

Of the 7,080 cases that have taken place since April 20, 1,055 are serious cases, with some requiring assisted breathing. Serious cases are 14.9% of cases, while this increases to 27.5% for individuals above 60 years old. The CECC will order antibody medication to treat serious cases.

According to Minister of Health and Welfare Chen Shih-chung, Taiwan’s Rt number has dropped to 1.2 from a high of 15. This is calculated based on daily numbers, with the worst-case scenario in mind, so the number could be lower. Numbers have decreased from May 21st.

Chen stated that the sacrifices made to date have been effective, so there is a need to maintain current measures. To this extent, Chen stated that reducing the time for sending people to quarantine facilities is still of utmost importance. There continue to be delays confirming and receiving information about COVID-related deaths.

Category one to three groups are prioritized for vaccination in the greater Taipei area, with plans to move onto other groups once these groups are fully vaccinated. Category one groups are prioritized for areas outside of Taipei, similarly with plans to move to other groups once vaccination is complete. Taipei has been allocated 305,000 doses and New Taipei has been allocated 309,000 doses.

New Taipei mayor Hou You-yi stated that infection rates at testing sites are around 2% or 3% now. Cases are falling in Taipei ahead of New Taipei, so he expects New Taipei to be a bit slower to reflect these trends. According to Hou, this is why the next few days are crucial to evaluate the COVID-19 outlook in New Taipei. Hou stated that 70% of cases being passed on come from family gatherings, while 40% have been linked to outdoor traditional markets.

Taipei mayor Ko wen-je stated that infection rates were slightly higher yesterday, but that overall trends still show a decline. It is thought that while the COVID-19 situation is under control in Wanhua, COVID-19 has spread to other countries. Ko stressed the need to evaluate what comes next, with a slowdown in COVID-19 cases, by evaluating the experience of other countries.

With concerns about the possibility of COVID-19 spreading at outdoor traditional markets due to crowds, this has led some markets to adopt a rotational system, in which vendors divide up which day they come to the market by odd or even address number or floor number. Similarly, visitors are divided up into which days they can go to the market based on odd or even national ID. This system has been implemented in Keelung, Taoyuan, and other cities, with IDs checked for visitors to traditional markets. Markets that cannot maintain such measures have been called on to shut down.

Experts suggest that the early effects of COVID-19 prevention measures can be seen. That being said, there continues to be concern that a premature return to level two measures could lead to COVID-19 to spread again, with particular concerns about the spread of COVID-19 in areas outside of Taipei through undetected transmission chains. 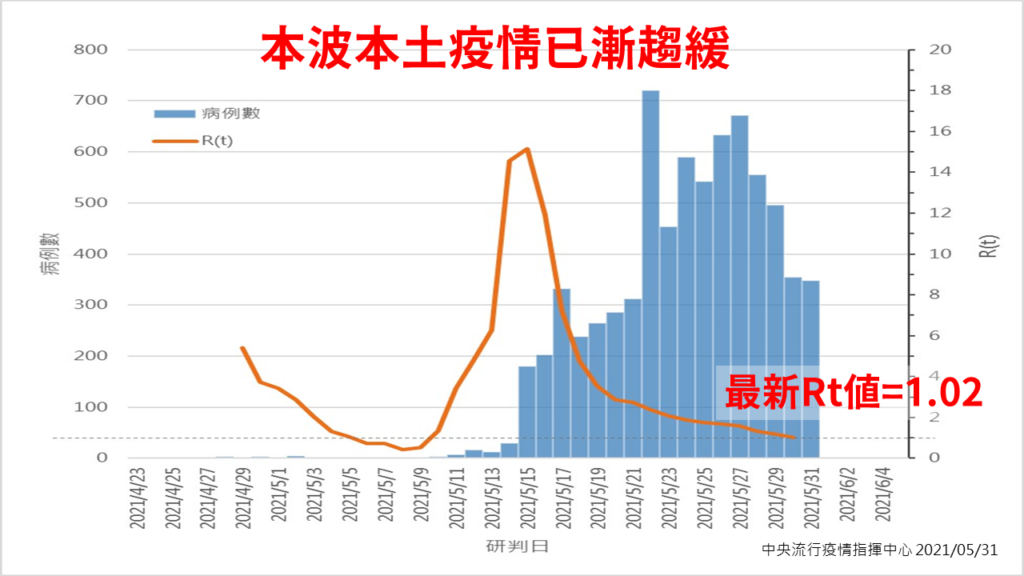 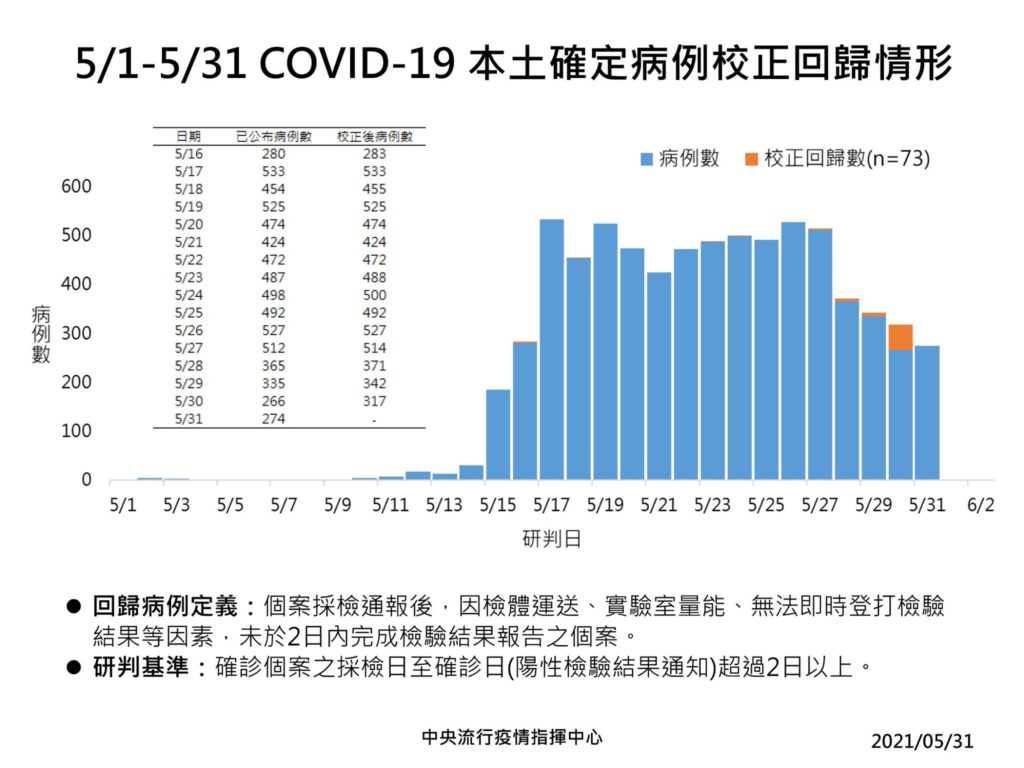 Data on the number of daily cases (left) and Rt value, along with the revised daily cases with added cases from the backlog (right). Photo credit: Ministry of Health and Welfare

Due to boosts in capacity, the CECC intends as of yesterday to put all positive COVID-19 cases in quarantine facilities. Similarly, while the CECC previously confined testing to individuals with visible symptoms due to limited testing capacity, now it will also allow for testing asymptomatic cases.

The emergency budget for COVID-related measures has been raised to 840 billion NT by the Legislative Yuan, which will last until June of next year The DPP has proposed that funds from the budget be distributed in stages. The budget includes subsidies for individuals with children, members of affected groups such as taxi drivers, tour guides, farmers, and fishermen, as well as low to middle-class families. Premier Su Tseng-chang will make a special report to the Legislative Yuan on the implementation of the budget next Tuesday.

Although the CECC has stated that medical supplies of N95 masks, PPE, and other equipment are efficient, there have been reports about Mackay Memorial Hospital reusing N95 masks. This reportedly took place in the hospital’s negative-pressure isolation ward.

A confirmed COVID-19 patient attacked and injured three nurses at the Shangho Hospital in Zhonghe, New Taipei, with a knife before being subdued. The attack took place in the hospital’s negative pressure isolation ward. Violence against medical workers is a recurring issue in hospitals in Taiwan, often from patients that do not accept their diagnosis or who do not wish to be hospitalized.

At the press conference today, Chen defended the timeline for purchasing vaccines, stating that vaccines purchased in the past are only arriving now, showing how the overall process of vaccine acquisition has taken a long time.

Chen stated that it was not the CECC’s concern when asked about Medigen stocks performing well, as Medigen is one of the domestic manufacturers that the government intends to buy vaccines from. Online disinformation has alleged that members of the Tsai administration hold Medigen stocks and are intent on developing domestic vaccines to profit from companies they have invested in. Taipei mayor Ko Wen-je alleged today that the Tsai administration was attempting to benefit corporate interests by pushing for domestic vaccines, though the CECC has stated that it only placed orders with domestic manufacturers after plans to purchase vaccines abroad fell through. 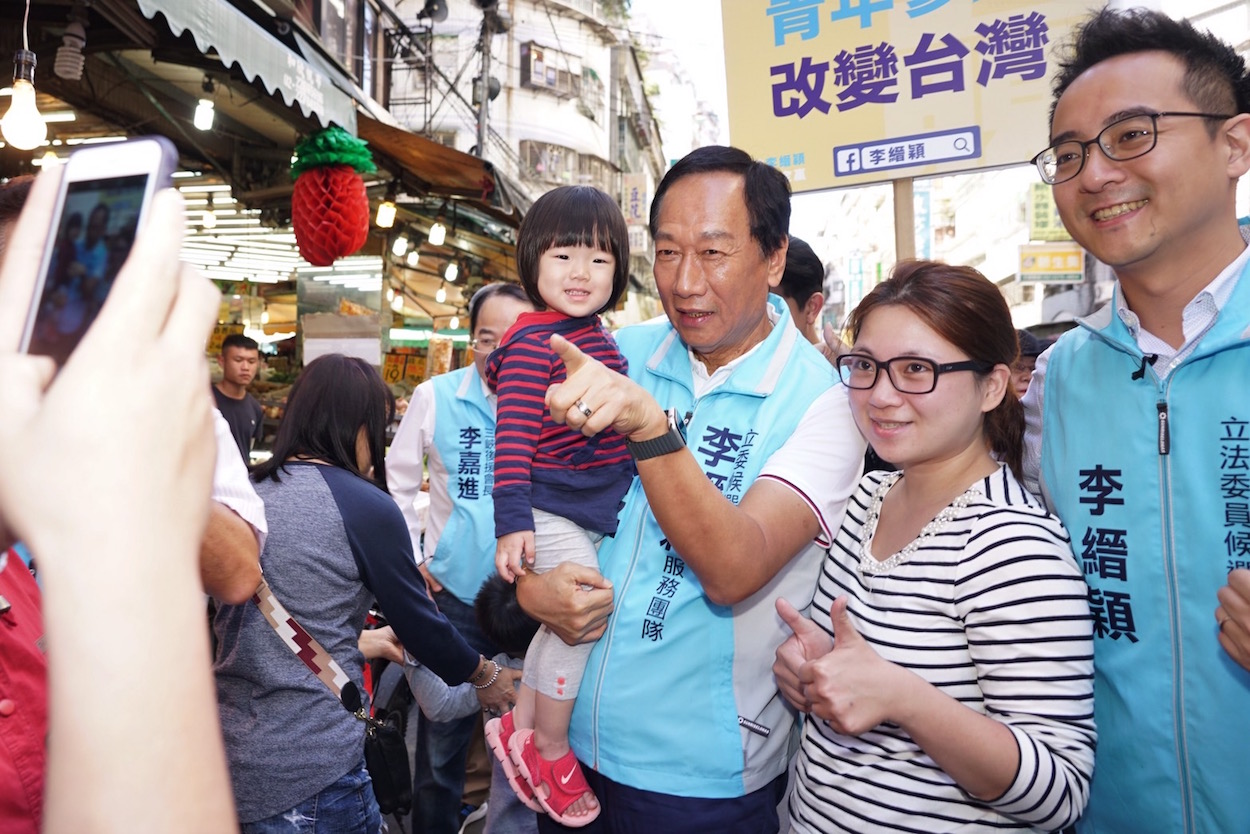 Chen provided further details on the timeline for vaccine purchases over the past year. Notably, Chen stated that Taiwan purchased AstraZeneca vaccines in November before AstraZeneca had secured an Emergency Use Authorization (EUA), based on expert opinion as to which vaccines would be successfully developed. Chen said that if Taiwan did not do this, vaccine doses would have all been bought up ahead of time, and Taiwan would be left out. Technical details were not provided to Taiwan, on the basis that these were trade secrets—vaccine purchases are, as a rule, highly secretive.

Similarly, Taiwan signed the COVAX international vaccine sharing agreement in September, before the agreement actually had any vaccines. This was done in order to maintain an international platform for vaccine acquisition. By the time that Moderna vaccines were purchased, Moderna had secured an EUA but only in the UK.

When asked about the possibility of vaccine passports, the use of a third vaccine dose to boost effectiveness, or mixing vaccines, Chen stated that no decision had been made. Such questions are premature, given Taiwan’s current shortage of vaccines.

FoxConn CEO Terry Gou continues with plans to try and import vaccines that it claims will be German BioNTech vaccines. FoxConn is in the process of submitting eight necessary documentation for importing vaccines. There have been calls from the public to relax restrictions on importing vaccines, as seen in a recent Facebook post by television host Chang Hsiao-yen, with the government having stated that it is open to working with businesses and religious groups that wish to import vaccines, but that they must follow the proper procedures.

Currently, the Fo Guang Shan Buddhist organization and the Sun Yat-Sen School, a KMT educational institution have also claimed that they will be purchasing vaccines. Fo Guang Shan intends to purchase 500,000 Johnson & Johnson vaccines from the US, while the Sun Yat-Sen School claims it will purchase five million BioNTech vaccines and five million Chinese-manufactured Sinopharm vaccines.

At the CECC press conference today, the CECC re-stated its position that it is open to the willingness of corporations and religious organizations, but that they need to provide clear and accurate documentation showing where they are obtaining vaccines from. This is needed to apply for a EUA.

The CECC has stated that it has met with representatives of the Fo Guang Shan to coordinate regarding its vaccine purchase plans. A special window will be set up for communications about vaccine purchase plans. It is possible that the CECC is more trusting of the Fo Guang Shan than attempts by FoxConn or the Sun Yat-Sen School to purchase vaccines, since this is done by the latter two to try and undermine the political legitimacy of the Tsai administration. Local governments frequently work with the Fo Guang Shan for disaster relief, pan-Blue or pan-Green. That being said, the organization’s leadership is thought to have pan-Blue leanings.

KMT city councilor Hsu Chiao-hsin lashed out at the central government earlier today after learning that members of the public cannot choose the brands of their vaccines, even with self-paid vaccinations. Hsu claimed that this was an unreasonable restriction on freedoms by the government and another sign that the government was attempting to favor domestic vaccines over foreign vaccines. That being said, it is not the case outside of Taiwan that members of the public are allowed to choose their own vaccines either and Taiwan’s vaccine supplies are limited enough that one cannot freely choose at will. 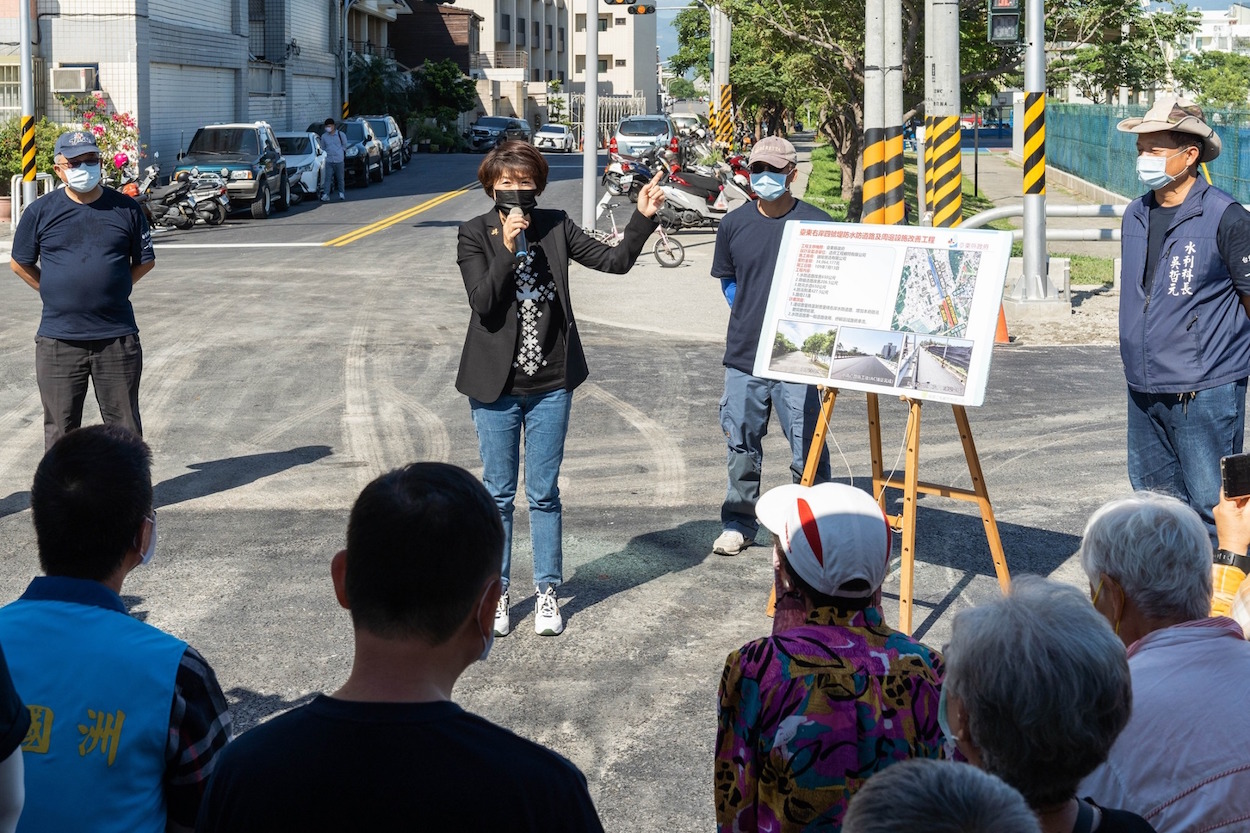 That being said, in a bizarre move, Rao called on the public not to ask where the vaccines came from. It is to be expected that this will lead to scrutiny from the CECC. Though corporations such as Terry Gou’s FoxConn and religious organizations as the Fo Guang Shan have announced plans to purchase vaccines, they have at least announced where they intend to source vaccines from—even if there is skepticism about Gou’s claims that he will not be purchasing Chinese vaccines. It may be that Rao intends to purchase Chinese vaccines, but was not willing to reveal this, with past polling showing that Taiwanese are skeptical of Chinese vaccines.

For its part, Chinese government spokespersons have asserted that Taiwan’s vaccine acquisition plans are part of its efforts to pursue independence, and that this is doomed to failure.