320 NEW DOMESTIC cases were announced by the Central Epidemic Command Center (CECC) today, along with seven imported cases, and 166 cases from the backlog. 21 deaths were announced, with the age range from 30 to 90.

Of today’s new cases and cases from the backlog, 224 cases were in New Taipei, 168 cases in Taipei, 33 cases in Taichung, 19 cases in Taoyuan, and 14 cases in Keelung. There were five cases each in Yilan and Taitung, four cases each in Hualien and Chiayi, three cases in Miaoli, two cases each in Hsinchu County and Changhua, and one case each in Yunlin, Kaohsiung, and Hsinchu City. Deaths took place between May 23rd and May 29th. 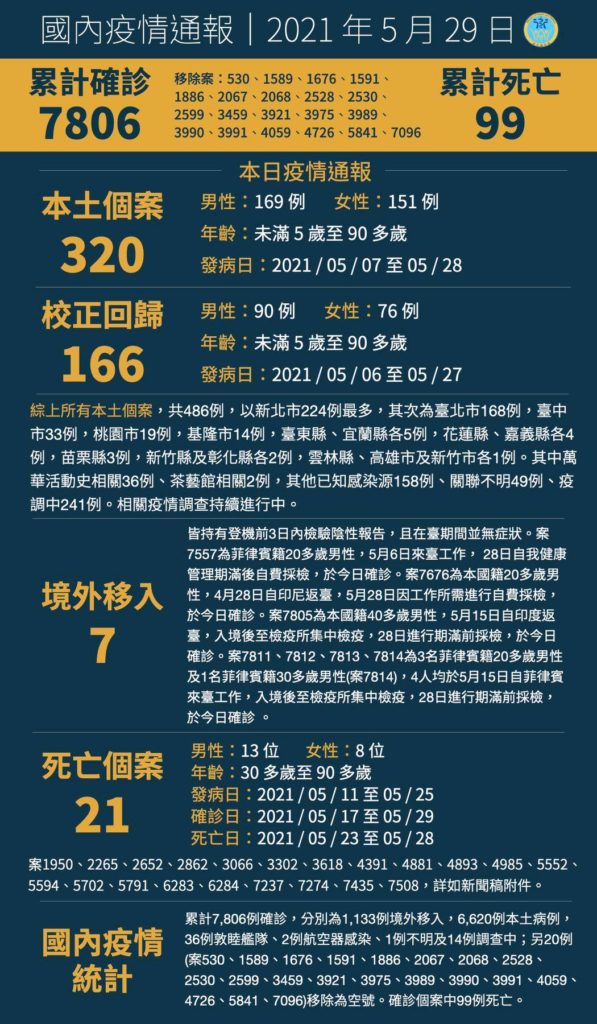 Efforts have been made to speed up the processing of backlogged tests, through inquiring among academic institutions as to whether they had PCR processing machines available to be used. This has led to academic institutions with the necessary qualifications to maintain accurate results being enrolled in efforts to speed up testing, such as the School of Veterinary Medicine at National Taiwan University.  This is why cases added from the backlog have been on the decline in past days, because the processing of cases from the backlog has sped up.

According to the CECC, the majority of lags are through inputting data into the system, but oftentimes the results are already known. As such, positive cases are notified, even if their results may not be input into the system. To this extent, the CECC is not as concerned about individuals with COVID-19 going out and about, due to not knowing of their diagnosis.

The CECC stated that there are closer to 30,000 tests that still need to be processed, not 50,000, though reported metrics are delayed due to these issues regarding lag. Initial delays and backlogs, followed by a rapid boost in capacity, were also seen regarding efforts to boost the domestic production of medical masks last year and their distribution, which also involved working with non-government sectors to obtain necessary equipment.

Concerns are that while cases in Taipei and New Taipei have gone down, cases are now spreading outside of the greater Taipei area. This will require more testing to clarify. Taipei mayor Ko Wen-je stated in a press conference that while infection rates are declining in Wanhua, they are higher in other parts of Taipei.

The CECC also responded to religious organizations and businesses that want to purchase vaccines. Apart from FoxConn indicating interest in purchasing vaccines, but this falling through for unknown reasons, the Fo Guang Shan religious organization—which like FoxConn, whose leaders have been accused of having pro-China leanings—is also interested in purchasing vaccines. Some reports suggest that Fo Guang Shan has obtained and intends to donate 500,000 vaccines. That being said, both pan-Blue and pan-Green local governments have been known to work closely with the Fo Guang Shan in disaster relief because of their powerful local networks.

The CECC stressed that it generally hopes to purchase vaccines directly from manufacturers, without going through distributors or intermediaries, in order to avoid safety issues. This is why the CECC has stressed the necessary certification for past days, though it would like to set up a channel for coordinating with interested religious organizations and businesses—nevertheless, this proposition may be delayed, similarly to how the CECC has expressed interest in working business groups that want to purchase testing kits, but does not seem to view the issue as a priority, citing that information still needs to be centrally reported with testing conducted by businesses. 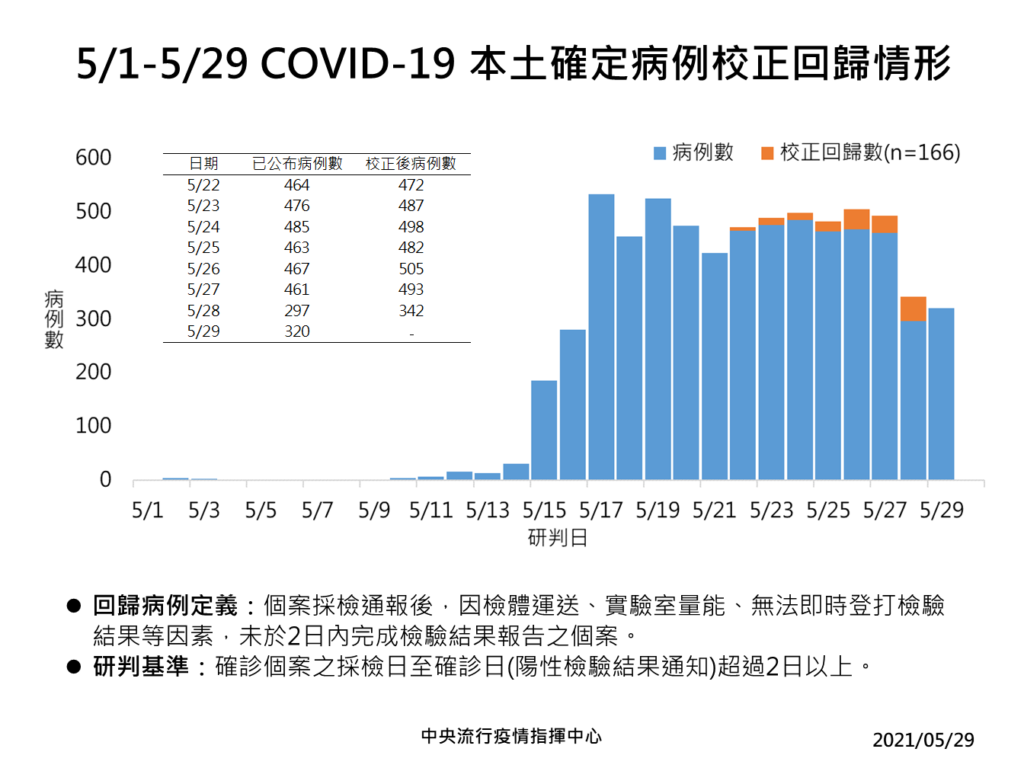 Data on the revised daily cases of COVID-19 with new cases added from the backlog. Photo credit: Ministry of Health and Welfare/Facebook

However, apart from wanting to maintain central authority to maintain quality control, it is possible the CECC wishes to avoid going through distributors or other intermediaries for vaccine purchases in order to minimize points of possible interference from the Chinese government.

Minister of Health and Welfare Chen Shih-chung stressed today that the Tsai administration had not delayed in efforts to purchase vaccines, signing the COVAX agreement in September of last year, signing a purchase order of ten million AstraZeneca in October, attempting to sign with Biontech in November but this falling through, and signing a purchase order with Moderna in February. According, talks with domestic manufacturers to purchase vaccines began at the end of 2020.

Much concern has focused on the distribution of medical resources as of late. The CECC announced that the contingency hospital system set up during the SARS crisis would now be mobilized, with 23 hospitals in each city and county of Taiwan, and Taipei having two hospitals. This allows for 1,092 beds, with 520 occupied so far. Contingency hospitals have some ICU capacity.

The CECC is hoping to reserve negative-pressure isolation wards for people on breathing machines. Who is sent to hospitals or asked to remain at home is determined on age, such as whether a patient is over sixty, and whether they have underlying medical conditions or breathing issues. The current death rate for COVID-19 is 1.2% or 1.3%. Chen stated today that he expects the death toll to rise from COVID-19. In line with delays reporting information, this includes delays in reporting information about deaths due to COVID-19 to date. 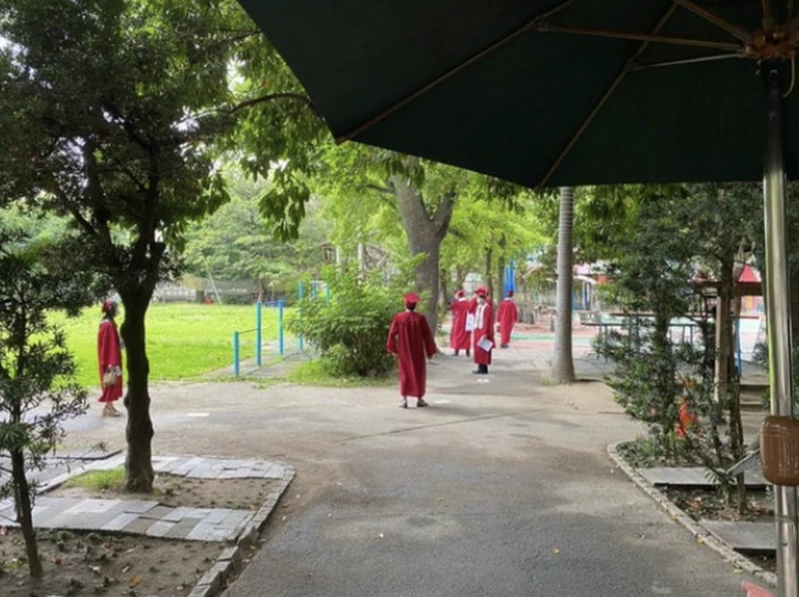 As it is feared that traditional markets could prove a place where COVID-19 spreads, they have been asked to monitor visitors. The CECC stated that it was aware that traditional markets have begun to carry out division of work shifts on their own, with stores with odd or even store addresses coming to the market depending on which day, or dividing based on which floor stores are on for indoor markets.

With plans by the Executive Yuan to roll out economic relief measures for individuals and businesses, this has led to some political contestation between the KMT and DPP. Stipends of between 10,000 NT and 30,000 NT will be sent to members of affected occupational groups, such as farmers, fishermen, taxi drivers, and tour guides, while families will be provided up to 10,000 NT per child. Various local governments have also rolled out measures. However, the KMT has suggested that it would be preferable to simply send money to all citizens, such as was done in Taiwan.

Controversy has erupted after a private high school in Taipei, the Taipei Kuei Shan School, held graduation ceremonies for its students. This took place in spite of a nationwide directive from the Ministry of Education stating that graduation ceremonies must be canceled or moved online. Although the Ministry of Education intends to fine the school 300,000 NT, the Taipei Kuei Shan School has argued that it complied with restrictions on outdoor gatherings.

Namely, outdoor gatherings of more than ten are forbidden, but the Taipei Kuei Shan School stated that it had students participate in groups of nine. Much criticisms of the school online have centered on the school being an elite private school in Taipei, seeing the school’s violations of restrictions as linked to elitism. The CECC has stated that it will leave it up to the local government to decide how to deal with the Taipei Kuei Shan School and Taipei mayor Ko Wen-je has lashed out at the school in public comments.

A family cluster infection of four in Keelung has resulted in the death of the father of the family, who was in his nineties. The Ruifang Night Market in New Taipei has announced that it will voluntarily continue to suspend operations, even as some other night markets in New Taipei have reopened. An ambulance in Banqiao got into a car accident while delivering a confirmed COVID-19 case to the hospital, with social distancing measures observed even while changing vehicles.

As the public has been called on not to go outside over the weekend, this has led to debate about whether it is safe to go outdoors and take a drive, even if one does not leave the car. Some have criticized this as unsafe, seeing as moving to the car from one’s home also makes contacts possible, or because travel may involve going to the bathroom, even if one mostly stays in a car.

The CECC continues to face criticisms over adjustments to the quarantine regimes for pilots that reduced quarantine schedules for pilots. Pilots were originally required to undergo five days of quarantine, followed by nine days of self-health management, which was later adjusted to three days of quarantine, followed by eleven days of self-health management. DPP legislator Fan Yun, who pushed for the proposal, has seen particular ire. However, the CECC has been criticized over that neither Minister of Health and Welfare and CECC head Chen Shih-chung nor CECC vice-director Chen Zong-yan were present at the meeting to discuss the reduction of quarantine schedules, which political critics have deemed an abdication of specialist responsibility.

The CECC has stated that it was still involved in decision-making, even if neither Chen Shih-chung or Chen Zong-yan were there. Chen Shih-chung stated at the press conference today that he would accept responsibility for this shift in policy. 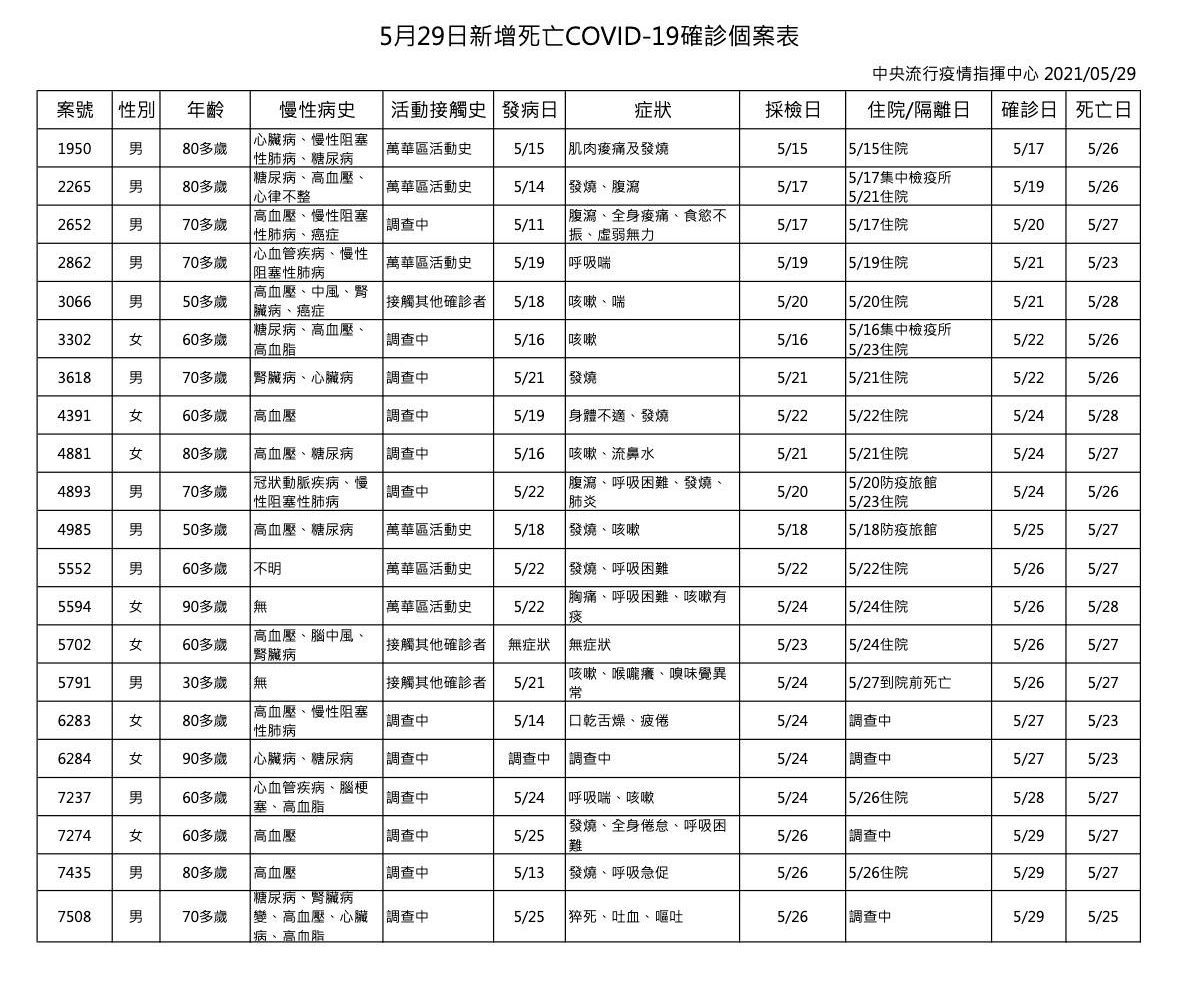 The conditions for triggering a level four alert, which is a full lockdown, are more than fourteen consecutive days of more than one hundred cases per day and half of those cases being of unknown origin. While the first condition has been met, the second condition has not. Local governments have stated that a shift to level four must be nationwide, seeing as for such measures to be effective, they must be coordinated.

This has not prevented Taipei and New Taipei from inching toward level four, however. As such, Taipei is expected to carry out exercises in preparation for a level four alert with firefighters, medical personnel, and transportation workers tomorrow at the National Science and Technology Center for Disaster Reduction or the city government building.

The New Taipei government has stated that it has already prepared for the possibility of a level four alert, with fourteen hot spot epidemic prevention centers currently being set up, and drills carried out last year, but that new drills will be carried out across all of the districts of New Taipei in the near future. The CECC has suggested that carrying out drills at this time could add to the burden of frontline workers in the fight of COVID-19.

New Taipei also revealed some details of what would take place during a level four alert, in that citizens would be divided into times in which they can go out based on their national IDs, with different times set up during the morning, afternoon, and night, and individuals only allowed to go out three times a week to make purchases. Bridges will be monitored to prevent violations and members of the public will not be allowed to drive on the national highway or take trains, with violators facing fines between 3,000 NT and 15,000 NT. Taipei has stated that this would involve three weeks of all work being stopped, with mass testing for hots spots. Actions by Ko and Hou may have an mutually amplifying effect on pushing for a shift to level four.