334 DOMESTIC CASES, along with five imported cases were announced today at the Central Epidemic Command Center’s daily press briefing, for a total of 339 cases. 256 cases were added from processing the backlog of tests, with around 30,500 tests still to be processed. Six new deaths were announced.

Of the new cases announced for today, which reported symptoms between May 10 and May 23rd, there were 177 cases in New Taipei with 43 cases in Banqiao. In Taipei, there were 99 cases, with 38 cases in Wanhua. There were 19 cases in Taoyuan, 12 in Changhua, seven each in Keelung and Taichung, five in Kaohsiung, three each in Pingtung and Tainan, and one case each Keelung and Tainan. 200 cases were from establishments related to Wanhua, with 34 linked to tea parlors where sex work sometimes takes place. Six cases were linked to a family of grape vendors that work in Wanhua but are based in Changhua, while 138 cases had other causes. 101 cases are of unclear origin. 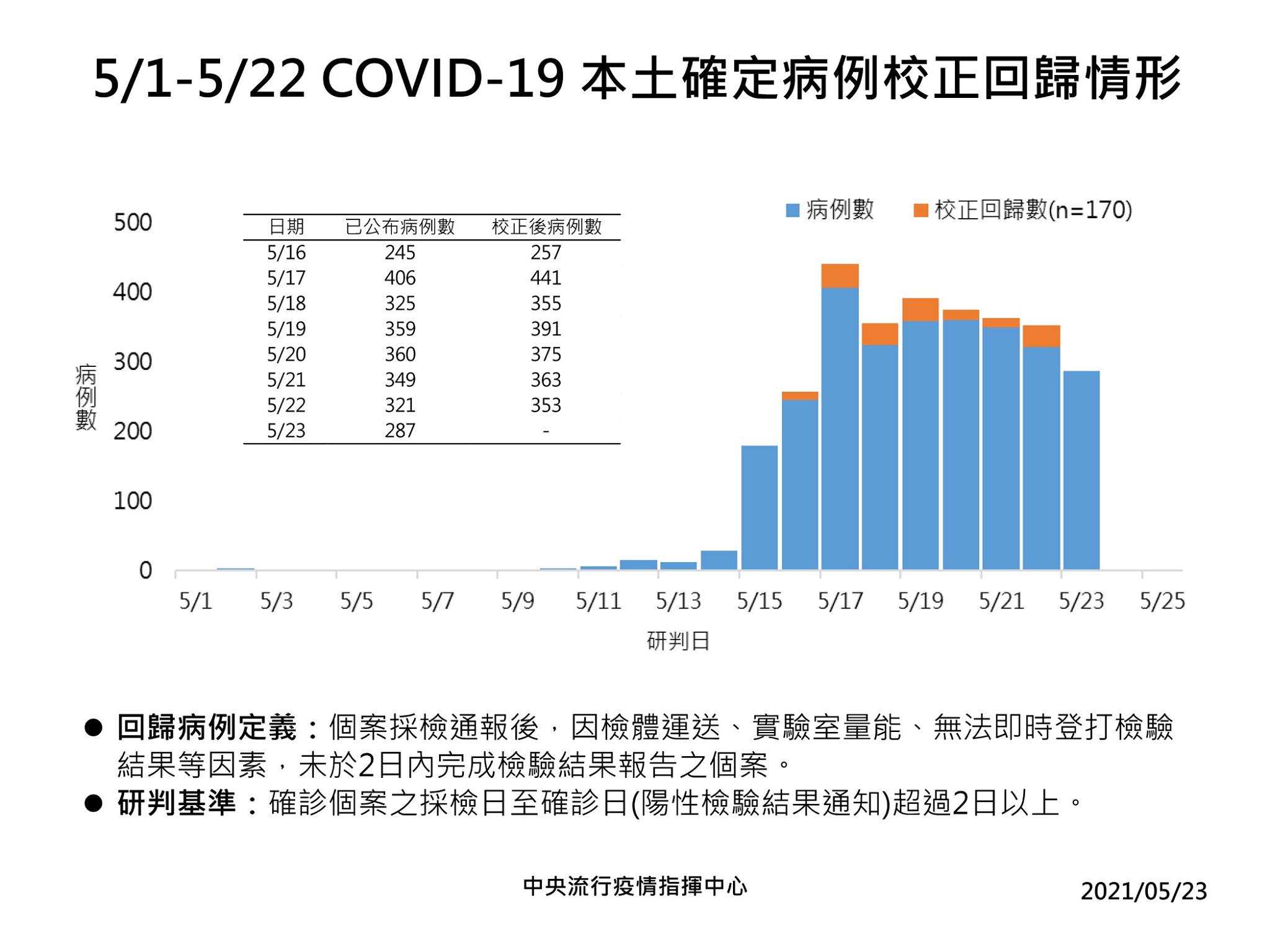 Amended numbers for daily cases, with the new cases processed from the backlog. Photo credit: Ministry of Health and Welfare/Facebook

Of the cases added to the backlog, which reported symptoms between May 14th and May 22nd, there were 99 cases New Taipei, with 34 cases in Banqiao, 148 cases in Taipei, with 76 in Wanhua, six cases in Taoyuan, two cases in Miaoli, and one case in Tainan. 161 of these cases were linked to Wanhua, with 25 cases related to tea parlors. 11 cases were linked to the family of grape vendors, 17 to other causes, while 70 cases are of unclear origin.

Delays in test processing are primarily in Taipei. Yunlin, Penghu, and other areas outside of northern Taiwan have slower testing while the rate of false positives is higher in places with less COVID-19 cases. At the press conference, Minister of Health and Welfare Chen Shih-chung cited the example of three individuals that tested positive during rapid testing in Kinmen, but whose PCR tests came back negative. As such, different cities have different testing procedures, particularly because if individuals with false positives are immediately put in the same room as individuals who are genuinely infected by COVID-19, this could lead to them becoming infected.

With plans to boost testing capacity, the CECC will announce later today what procedures for businesses wanting to buy or provide testing kits will be. Along these lines, extra budget will be allocated from the Executive Yuan to disease-fighting efforts.

Taipei and New Taipei closed restaurants for indoor dining yesterday, on the heels of Taichung and Kaohsiung announcing the same earlier. Businesses unable to maintain social distancing measures indoors were previously called on to close. When asked about cases of restaurant employees being fined for eating in their places of employment, Chen Shih-chung stated that individuals working at restaurants could eat indoors so long as proper social distancing measures were maintained. 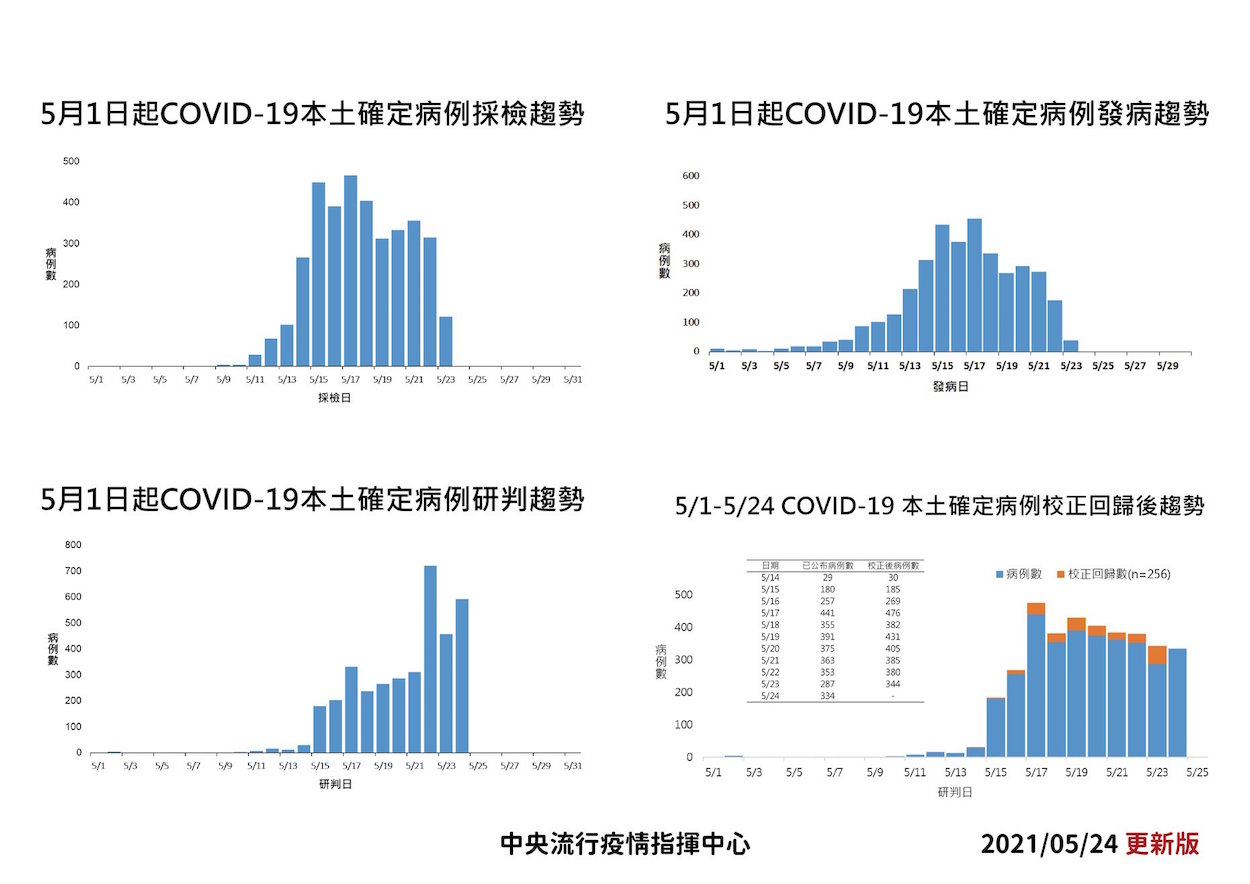 The Kinmen County government announced that they are now requiring negative COVID-19 tests to travel to Kinmen earlier today, starting tomorrow. This led to reactions from the CECC, however, which stated that the Kinmen local government had not sought the approval of the central government before announcing this.

In particular, the central government has sought to assert its authority over local governments, to prevent them from breaking off in terms of policy. It is possible, for example, that other local governments will require negative COVID-19 tests before travel, citing the precedent of Kinmen and Penghu. It is to be seen if there will be other policy in which the Kinmen County government will try to break off from the central government, with Kinmen having contemplated purchases of Chinese vaccines, but the CECC stating that they could not do this.

Four more cases were added to a COVID-19 cluster linked to a group of 32 that went to sing karaoke together earlier this month, mostly consisting of Chaoyang University students. The number of confirmed cases is up by four, making the total number of cases 14, with one China Medical University student scheduled to undergo testing.

A Fubon Life Insurance Employee in Keelung has been confirmed with COVID-19. An infection at a snack bar at Keelung has led to concerns, because of the fact that parts of Keelung are similarly dense to Wanhua and sex work takes place there. As such, Keelung mayor Lin Yu-chang has called on the central government to extend the current level 3 alert by two weeks.

The legislature has suspended sessions, instead moving to meeting online. Subsidies for affected art workers will be rolled out by the Ministry of Culture, while subsidies have been proposed for parents who need to take leave during the pandemic.

With Taipei MRT workers continuing to work, despite reports of a “second wave” among staff, the Taipei MRT management has been accused by staff of trying to cover this up in order to ensure that work continues. MRT services are currently unaffected by the current pandemic. There are similar concerns about workers for the Taiwan Railways Administration. The working conditions of delivery workers have also faced scrutiny, as in a recent incident in which a customer tried to panic buy 42 kilograms worth of supplies at 3 AM, leading the delivery worker to decline the request.

Many fears continue to abound about individuals that violate restrictions on gatherings. Over the weekend in Changhua, groups of people gathered at Mazu temples to pray for a return to normality—however, religious gatherings have been ordered to stop in order to prevent COVID-19 from spreading. Similarly, while individuals have been called on to stay indoors and not go outside, there were many worries provoked by large groups that traveled to outdoor parks on Yangming Mountain, with reports that some of them were not wearing masks.

The Taipei government is currently searching for 31 individuals that tested positive for COVID-19 through PCR tests, which require three days for results to be known, but left incomplete or false contact information or had unreadable handwriting. As such, a search is under way for these individuals by police, though there were originally 90 individuals that could not be found and 59 have already been found. It is thought that some may be afraid of the social stigma that would result from a positive diagnosis.

The University of Taipei has come under fire from the National Student Union of Taiwan for trying to make students vacate their dorms and go home. This takes place despite not only the objection of students, but the fact that the CECC has asked members of the public to avoid unnecessary travel and the Ministry of Education has asked universities not to make students leave dormitories.

A photo by doctor Zhu Zhi-peng went viral on Facebook yesterday, racking up over 7,000 shares and 13,000 likes, purported to show medical workers at a testing station in Zhonghe in New Taipei, wearing only plastic raincoats and not proper safety equipment. According to Zhu, this was because of the heat, sweat making it impossible to see while wearing protective equipment. Although testing was originally supposed to take place in an air-conditioned community center, the city government changed plans for testing to take place outdoors because of the objections of local residents.

Given fears of medical personnel becoming infected with COVID-19, this has led to increased reports of discrimination against doctors and nurses, such as doctors and nurses prevented from buying take-out. Some medical workers have taken to staying at hospitals or in quarantine facilities to avoid infecting their families, leading to calls for boosting facilities for medical workers. There is also talk of days off for individuals that take vaccines, because of side effects from the vaccine.

This has led to criticisms of New Taipei mayor Hou You-yi for hypocrisy, with Hou also accused of claiming that New Taipei has sufficient bed capacity in hospitals, but sending patients to Taoyuan. The CECC has called on New Taipei to strengthen its existing quarantine facilities so that they can host COVID-positive patients, while beds are currently being cleared at hospitals in a move that is expected to free up over one thousand beds. 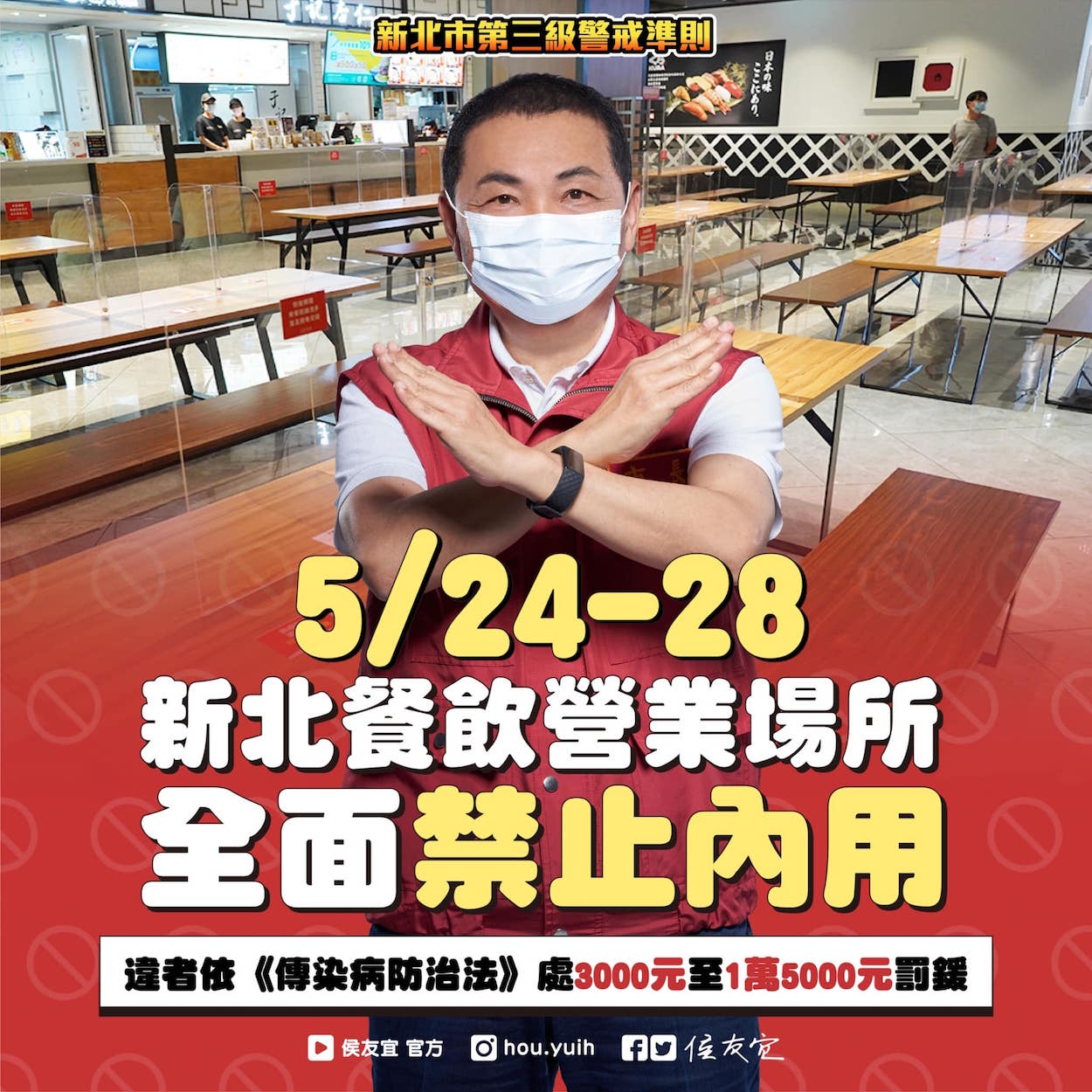 Permits to hire migrant workers for employers were extended by three months, as it is difficult for migrant workers to travel to Taiwan at present. This could potentially be used as a way to mire migrant workers in their current employment status, however, with brokers having illegally tried to use COVID-19 as pretext to prevent migrant workers from changing their occupation in the past, claiming that the Ministry of Labor rules had rolled out new rules during COVID-19—though this was falsehood.

2,223 individuals were vaccinated in the past two days. With self-paid vaccinations suspended, only five were self-paid, while 2,218 were paid for by the government. 302,698 have been vaccinated to date, out of a total stock of 726,600 vaccines, with the Tsai administration stating that it does not believe it will have any difficulty using up this stock of vaccines.

With the Tsai administration having accused the Shanghai Fosun Pharmaceutical Company of preventing it from directly purchasing vaccines from Biontech in the past, the company now claims that it was always willing to provide Taiwan with vaccines. There are rumors that FoxConn, known for its pro-China leanings, has asked the CECC as to whether it could directly purchase vaccines from Fosun.

Indeed, former gangster turned pro-unification politician Chang An-le’s China Unification Promotion Party (CUPP) announced today that he will harass Chen Shih-chung every day until he accepts Chinese vaccines. Chang formerly executed political dissidents for the KMT during the authoritarian period and the CUPP has a history of political violence. When asked about this during the CECC press conference, Chen ignored the question.

At today’s press conference, Chen was asked about the possibility of extending level 3 past the current day it is set to end, on Friday, as well as the possibility of a shift to level 4. It is highly unlikely the CECC would try to shift to level 2, but Chen stated that options are still being evaluated. Namely, as it takes a week for the results of measures against COVID-19 to be observed, this is still not yet visible. Taipei mayor Ko Wen-je has echoed these comments, stating that he believes that measures have had an effect, but still needs to be observed. As such, it would not be surprising if the CECC waits until Friday to announce a decision, in the hopes of having as much data as possible to make an informed decision about how to calibrate the next set of measures.