290 NEW CASES of COVID-19 were announced at the Central Epidemic Command Center’s (CECC) daily press conference today. 287 cases were domestic transmission, while three were imported. The CECC announced that, as it is working through the current backlog of unprocessed tests, 170 new cases were added to the past week. Likewise, six new deaths from COVID-19 were also announced in what was Taiwan’s largest one-day tick in deaths from the coronavirus. Taiwan’s death toll from the pandemic is now at 17.

Of the cases from today, 142 cases were in New Taipei, with 32 in Banqiao. Taipei had 77 cases, of which 38 were from Wanhua. Taoyuan reported 23 cases, Pingtung and Nantou reported eight cases each, Yilan County reported six cases, Keelung, Taichung, and Changhua reported five cases, Tainan reported two cases, and Hualien, Chiayi City, Chiayi County, Hsinchu County, Hsinchu City, and Yunlin all reported one case each. Of the revised cases from the backlog, 88 were in Taipei with 48 in Wanhua, with 73 cases in New Taipei and 17 in Banqiao, six in Changhua County, and one case each in Yilan and Hsinchu. 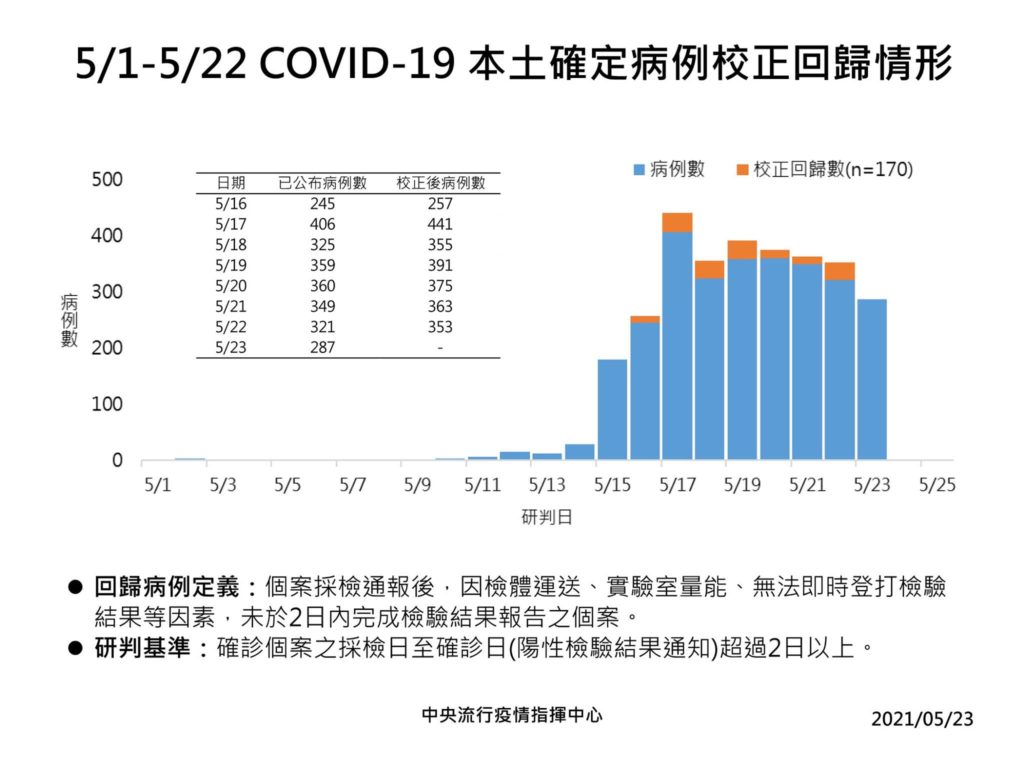 Revised daily case numbers for the past week, including the processed backlog. Photo credit: Ministry of Health and Welfare/Facebook

Overall, 6% of cases are of unclear origin, which is 480 cases. This is primarily focused in the two Taipeis, with New Taipei having 188 cases of unclear origin, Taipei has 113 of unclear origin, and other cities can have fewer cases. The CECC has stated that, in its current investigations into the start of the outbreak, it does not rule out that the origin did not originate from China Airlines pilots.

The revised daily numbers from the newly added cases from the backlog show an overall decline from the peak of May 17th. That being said, the new numbers change the rates of infection at testing sites. While past numbers showed a decline from a peak of 5.8% on May 15th to a low of 2.2% on May 19th, this has climbed back up to 3.4% yesterday.

As cases from the backlog still remain to be processed, these numbers are still subject to change. Chen defended revising the daily counts for the past week at the press conference today, saying that this was necessary to allow for better accuracy in discerning daily changes in case numbers or rates of infection.

Between last week and this week, the cases outside of Taipei and New Taipei have increased from 10% to 15%, raising concerns of the spread of COVID-19 to central and southern Taiwan. Minister of Health and Welfare Chen Shih-chung stated that this was why the CECC had shifted to level three nationwide, before any explosion of cases took place outside of Taipei and New Taipei. 6.2% of the current cases are severe, with 66 individuals on breathing machines, which is also 6.2% of patients. Two patients are on ECMO. 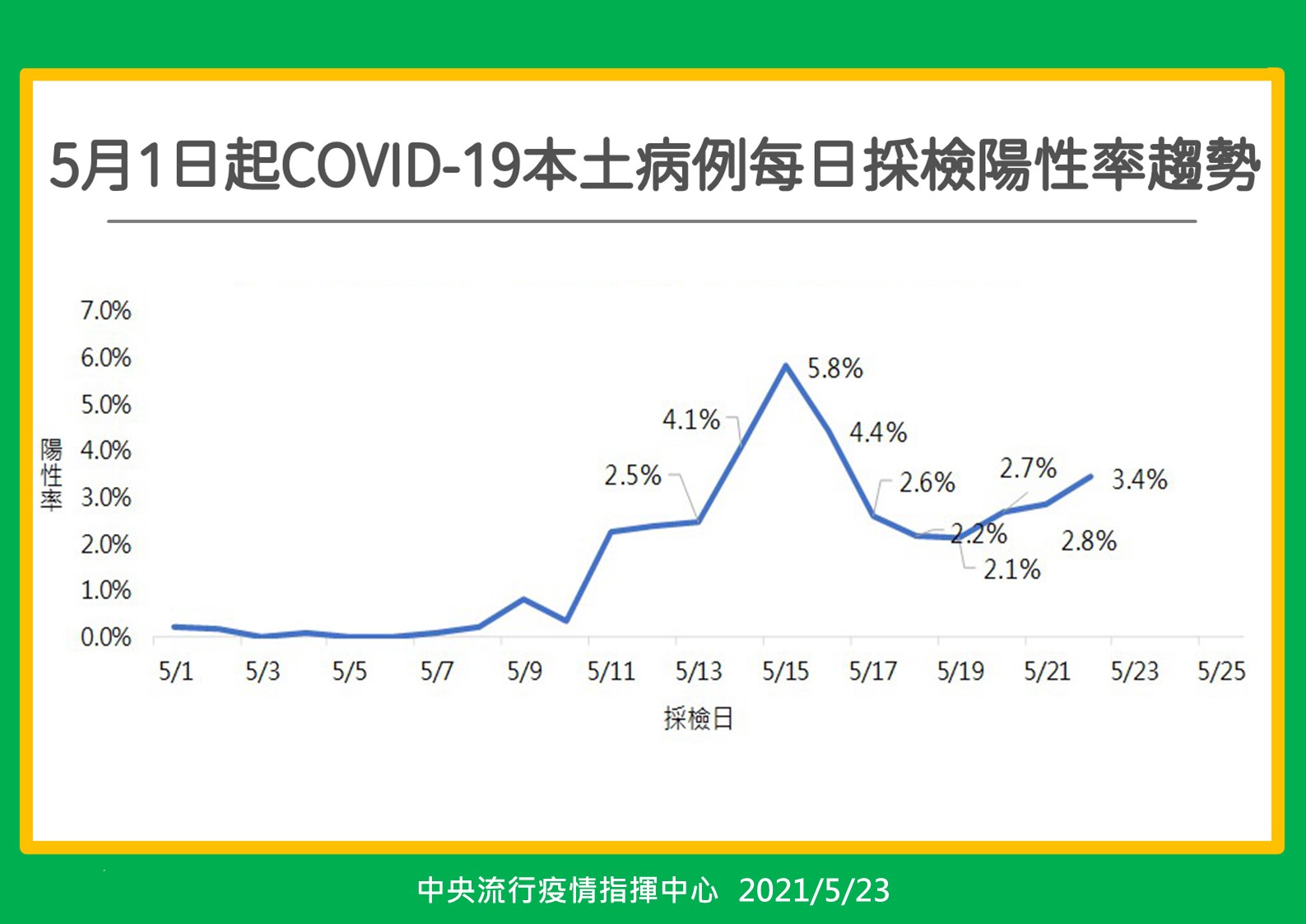 Daily infection rates, with the revised case numbers for the backlog. Photo credit: Ministry of Health and Welfare/Facebook

The CECC is working on increasing the speed of notifying patients of confirmed COVID-19 diagnoses from PCR testing, which is more accurate than the rapid testing used at testing sites. This will involve notifying individuals through the National Health Insurance system, which already has seen high use—when demand for medical masks was tight at the start of the pandemic, requiring a national mask distribution system, more than 5,000,000 used the National Health Insurance to purchase masks.

5,000,000 NT in subsidies will be provided to medical institutions to purchase tests and equipment used for testing. Moreover, the CECC is calling for qualified medical professionals to step up and assist in efforts to increase the speed of processing tests, to get through the backlog, and establish a “national testing team.” With individuals called on to remain at home for the three days that PCR tests take to process, the CECC is trying to speed up the ability to inform people of negative diagnoses.

Quarantine policies have been relaxed so that quarantined individuals can live in an apartment with a household, so long as they have a separate bathroom of their own to use. When asked whether this reflects lack of capacity during the press conference, Minister Chen stated that this was done in order to better accord with actually existing practices.

Speculation broke out that the current level three alert status would last until June 8th after a gaffe by CECC official Chen Zong-yan that the level three would continue until then. The current two-week level three status is set to last until May 28th. Chen later corrected himself. The CECC has stated that next week will be important to see as to the effectiveness of current measures, before evaluating whether shifts may take place, with trends more discernible after next week. It is to be seen whether the backlog of tests will be processed by next week, since this has the potential to force reevaluation of current conclusions.

A Taiwan Semiconductor Manufacturing Company employee working in the Central Science Park was confirmed positive with COVID-19 yesterday. Along with the fact that Chaoyang University has facilities located in the Central Science Park and that a Wistron employee tested positive for COVID-19, raises concerns that the semiconductor giant, which is the world’s largest, or other key Taiwanese companies crucial to global supply chains could be affected by the current COVID-19 outbreak.

Plans are underway to expand testing at hospitals in Taipei. Testing is also set to expand in Yunlin, after four new cases raised concern of infection spread. Particularly concerning is that one of the new cases is a man with mental illness that cannot clearly explain his travel history. Taipei is banning indoor dining, following on the heels of Taichung and Kaohsiung.

A birth took place under COVID-19 conditions earlier this week, with a Caesarean section carried out because the mother was infected with the coronavirus, and fears that this could spread to the infant child. Medical staff that took part in the operation wore full PPE and worked without air conditioning during the operation.

As many people are ordering takeout, due to avoiding going out, this has led to fears that delivery personnel could potentially become infected themselves, or infect their customers. This was the case after a delivery person visited a quarantine hotel, then continued deliveries, leading to worries by subsequent customers. 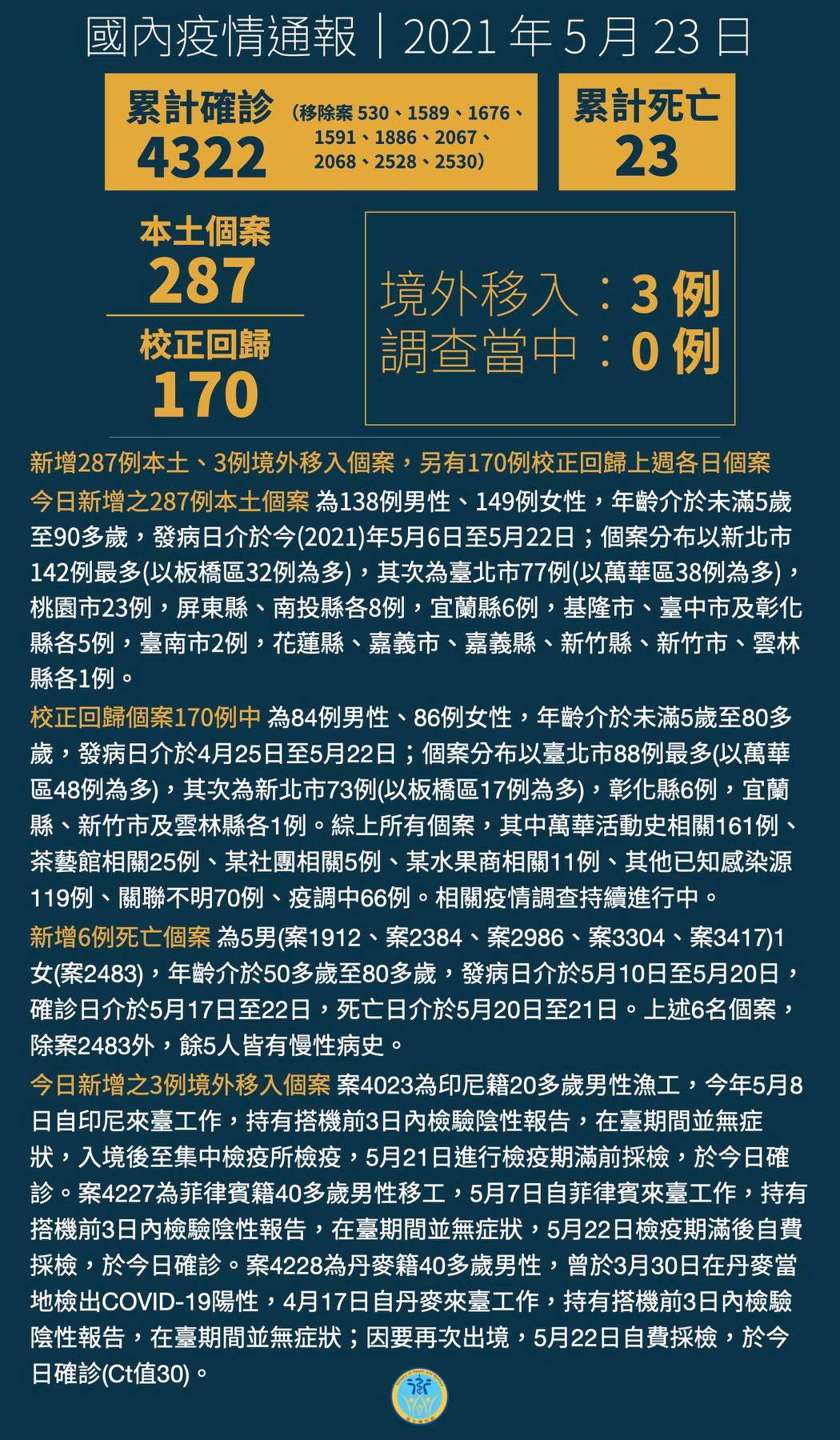 Infographic on the new daily cases released by the CECC. Photo credit: Ministry of Health and Welfare/Facebook

As government individuals urged individuals not to go out over the weekend, this led to sizable drops in traffic. Traffic was down by 50% on the National Freeway 5, according to the National Freeway Bureau. The Taipei Department of Transportation also stated that traffic was down by about 50%. As of 3 PM yesterday, there had only been 100,000 passengers on the Taipei MRT, a decline of 240,000 from the same time last week.

A bipartisan group of 60 Republicans and Democrats signed a letter to US Secretary of State Anthony Blinken urging for vaccines to be provided to Taiwan. US president Joe Biden promised to distribute 80 million vaccines globally, followed by another pledge of 20 million vaccines, but it is still unclear whether Taiwan will be included in vaccine distribution plans. Minister Chen met with US Secretary for Health and Human Services Xavier Becerra by video conference earlier this week, following which Becerra urged WHO participation for Taiwan.

The Taiwan Association for Human Rights (TAHR), one of the leading civil society organizations in Taiwan, has called for police to reduce activities in order to avoid the spread of COVID-19, including reducing unnecessary inspections. This includes halting specialized plans for one year, postponing low-priority tasks, as well as traffic inspections to fine individuals not wearing medical masks while driving, seeing as police do not have protective equipment and could become infected with COVID-19 themselves while conducting such inspections. The police has stated that it will consider the opinions of the TAHR.