295 New Cases Reported, Concerns About Cluster Infections at Hospitals on the Rise

The highest number of cases were in New Taipei, with 157 new cases, of which 40 were in Zhonghe. Taipei had 87 new cases, with 40 in Wanhua, which is at the center of the outbreak. However, the number of cases in New Taipei is on the rise, in areas with strong transportation links to Wanhua such as Zhonghe and Banqiao, and there are concerns that cases could spread elsewhere from New Taipei.

Taoyuan reported 17 cases, Yilan had eight cases, Changhua had six cases, Keelung had five cases. Kaohsiung and Taichung both had two cases, and Hsinchu and Yunlin both had one case each. As there are fears that COVID-19 could spread to central and southern Taiwan, the number of cases in Kaohsiung and Taichung, Taiwan’s second-largest and third-largest cities, is something worth keeping an eye on.

Infographic released by the CECC on the cases today. Photo credit: Ministry of Health and Welfare/Facebook

Minor shifts do not indicate longer-term trends, however. Minister of Health and Welfare Chen Shih-chung stated that trends will be more visible ten to fourteen days after the start of the current outbreak, though it does not appear that there has been any dramatic shift in the situation. Some experts have stated that they believe the peak of COVID-19 infections will come next week on Wednesday or Thursday. CECC members have themselves stated that cases could reach 3,000 in a month. When asked about this during the press conference, Chen emphasized remaining attentive to the present, rather than speculating about when the peak of COVID-19 would take place, or when things would return to normal. Testing results also do not reflect the full picture of the current situation, given a possible backlog of testing results.

However, the CECC also reported a new death from COVID-19. The death was a 70-year-old woman living in Wanhua who was found dead at her home on the 17th. She developed symptoms on the 15th but did not initially wish to be hospitalized, and was placed on a watchlist on the 16th. The woman is Taiwan’s fifteen death from COVID-19 in the course of the pandemic. The woman was only found to be COVID-positive after death.

Taipei, New Taipei, and Changhua are using rapid testing, which is useful for areas with high positivity rates, but would result in false positives in areas with lower positivity rates—in Yilan, for example, which has a 1% positivity rate, out of every ten individuals with positive results, there would be seven false positives. It has long been a worry of the CECC that too many false positives would overwhelm an already stressed hospital system. There may be plans down the line to roll out testing kits available for purchase, though this will require some means of ensuring that information about testing results is centralized. 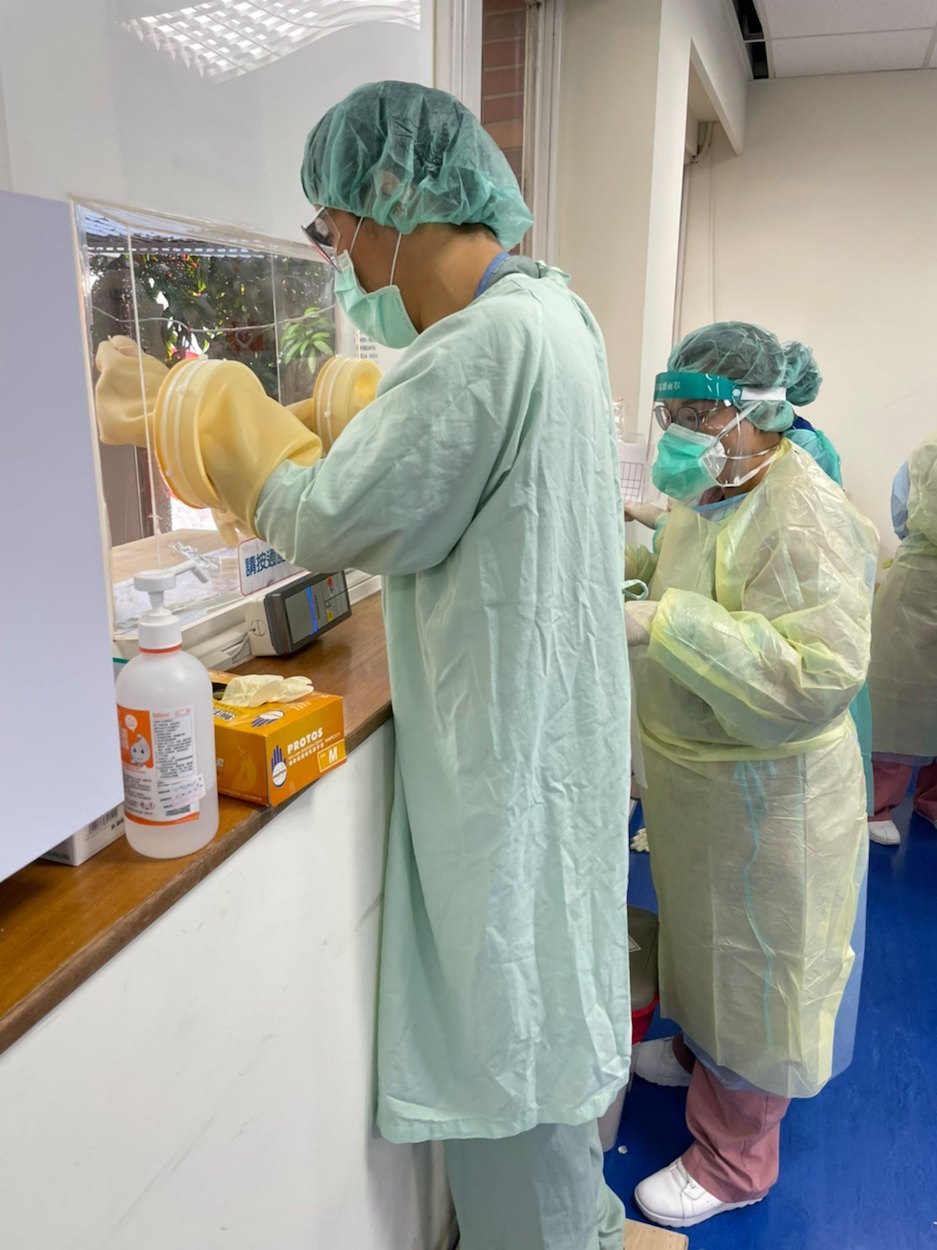 With concerns about individuals in Wanhua traveling elsewhere, including possible asymptomatic cases, an SMS message was sent out today at 3 PM to remind people tested in Wanhua to visit local health services if they feel sick. It is hoped that individuals will not travel if they need medical treatment, increasing the risk of spreading COVID-19, but that they will seek treatment locally.

Minister Chen took the opportunity to remind members of the public to stay at home if there is no pressing need to go out, as well as to warn journalists conducting interviews at testing sites of the possibility of becoming infected due to this. Chen’s comments directed at journalists came in the wake of an ETToday journalist becoming infected with COVID-19 due to conducting interviews at tea houses in Wanhua. Chen emphasized that vital information would not be gained from man on the street interviews at testing sites, but journalists could become infected with COVID-19 due to proximity with infected individuals.

Taiwan as a whole is on level three alert status, which is near-lockdown. Schools have been closed nationally, with a shift to online teaching. Indoor gatherings of more than five and outdoor gatherings of more than ten are forbidden with fines of between 60,000 and 300,000 NT, though this does not apply to families living together, or businesses. While work has not been stopped for all of Taiwan, some businesses have canceled work on their own. Restaurants unable to maintain social distancing indoors have been asked to close, with take-out or deliveries encouraged.

This has led to cancellations and closures nationally, including of many traditional markets and night markets. The Yilan International Children’s Folklore and Folkgame Festival has been canceled, though ten million NT was already spent from its budget. The remainder of the festival’s 130 million NT will be allocated to COVID-19 prevention measures.

The Executive Yuan has rolled out a new QR code registration system for contact tracing, rolled out under the auspices of Digital Minister Audrey Tang in collaboration with HTC. The new system does not collect personal data and works through text messages sent to cell phones, taking less than ten seconds to complete. The CECC explained the new system at its press conference today. Receiving the texts allows telecom carriers to have records of where customers were present, with coordination likely aided by the close relation between Taiwan’s telecom carriers and the state.

However, there have been complaints about delays in rolling out the system, with the Keelung city government criticized for still using paper-based registration despite the new system. Keelung mayor Lin Yu-chang of the DPP stated that the Keelung city government only learned about the system from watching the news, suggesting lack of coordination between the central and local governments.

With a shortage of quararantine facilities in Taipei, efforts are being made to shift patients between Taipei and New Taipei to ensure adequate distribution of beds.

With concerns of a cluster infection at National Taiwan University Hospital (NTUH), hospital workers have been tested for COVID-19 since yesterday. Testing is expected to finish today, with over 10,000 workers having undergone testing. While ten of the original 36 workers tested were positive for COVID-19, further testing resulted in an additional six or seven cases, suggesting that the hospital has not yet seen a cluster. The source of infection is believed to be from the outside, rather than due to spread within the hospital, as a result of NTUH workers that traveled to Wanhua.

Similarly, three workers and two patients were tested positive at the Taipei City Hospital Heping Branch, in the latest new cases at the hospital. The Heping Hospital has stopped accepting new patients, while hospital management has emphasized that there have been no additional transmission chains of COVID-19 found. The Heping Hospital previously had nine cases of COVID-19 infection that were due to COVID-19 spreading within the hospital, but these cases are thought to be due to workers that visited Wanhua and are not thought to be related.

The Far Eastern Memorial Hospital reported a new COVID-19 case today, making the total number of cases connected to the hospital fourteen. 177 contacts have been listed. At the Taipei Hemodialysis Center, one staff member has been hospitalized and an additional four individuals have tested positive. At the Tri-Service General Hospital Songshan Branch, four hospital workers were hospitalized due to contact with a nurse that contracted COVID-19. Cases at the Taipei Veterans General Hospital are not thought to be linked to transmission in the hospital,

Other places where new infections have been confirmed include National Taiwan University, with one student in the Department of Social Sciences having tested positive for COVID-19, the National Audit Office, Fubon Financial Holding, and the Entie Commercial Bank. Though there were previously concerns about a kindergartener in Kinmen being COVID-positive, raising fears of COVID-19 spreading to the outlying island, such fears later turned out to be unfounded. A driver for China Airlines whose route passed through Wanhua was confirmed COVID-positive, with much media speculation as to his possible contacts.

Individuals not wearing masks have also been fined across Taiwan. This includes 331 cases in Kaohsiung on just the 19th, two cases in Chiayi, and 1,207 cases in New Taipei over five days.

400,000 doses of the AstraZeneca vaccine arrived in Taiwan yesterday, having been sent to Taiwan through the COVAX vaccine-sharing agreement. The vaccines are currently undergoing testing for quality control, as plans are drawn up for their distribution. Local governments have stated that they will set up distribution mechanisms for vaccines.

Contestation over international vaccine diplomacy continues, with Honduras warning that it may switch recognition to China because of Taiwan’s inability to provide it with vaccines. This has led to the US stating that it intends to send vaccines to Latin America as part of upcoming plans to globally distribute 80 million vaccines, though Taiwan is also in need of vaccines. The KMT and Taipei mayor Ko Wen-je have lashed out at the US, claiming that the US has not provided Taiwan with even one dose of vaccines to date.

Similarly, KMT politicians such as Central Standing Committee member Sean Lien have been dismissive of the CECC’s current measures, claiming that lockdowns are useless without vaccines. One can expect that the KMT will try to leverage on Taiwan’s current need for vaccines as much as possible, claiming that as the China-friendly party in Taiwanese politics, it could help obtain Chinese vaccines or at least prevent Chinese interference in efforts by Taiwan to obtain western-produced vaccines.