WITH A RAPID shift in Taiwan’s COVID-19 situation in the last few days, sixteen new cases of COVID-19 domestic transmission were announced today by Minister of Health and Welfare Chen Shih-chung at the Central Epidemic Command Center’s (CECC) press conference this afternoon. This is Taiwan’s largest one-day increase in domestic cases during the pandemic so far.

The CECC coordinates Taiwan’s response to COVID-19 under the Ministry of Health and Welfare and it is headed by Chen. These new cases took place in Taipei, New Taipei, Keelung, and Yilan. Travel histories of the inspected have been publicized. 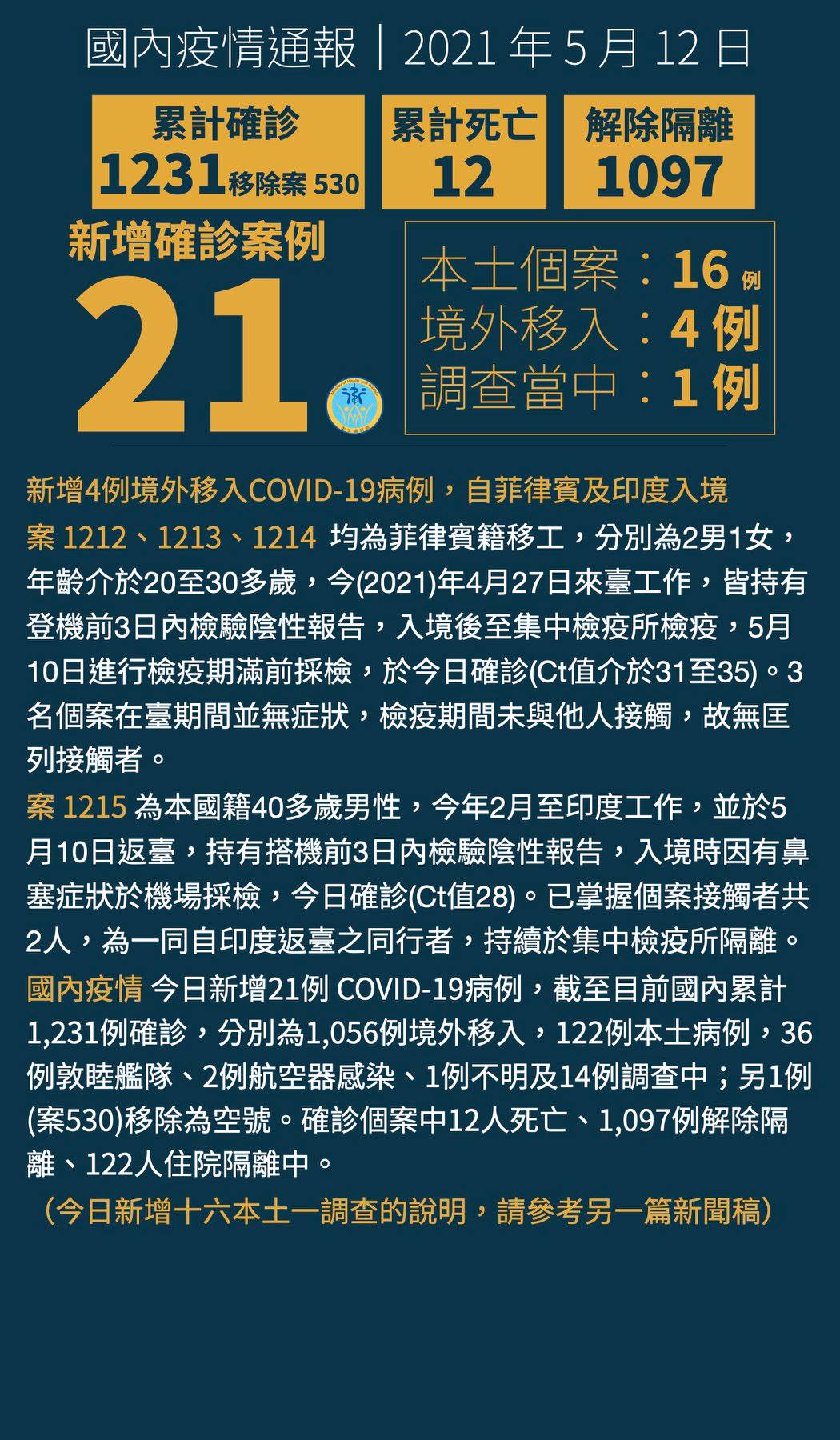 Much speculation ahead of time was that the CECC would announce a shift to level three of its alert system today, with Chen indicating mixed signals whether this would take place ahead of time. Level three would just be short of a lockdown, with indoor gatherings of more than five individuals and outdoor gatherings of more than ten individuals banned. Level three would also suspend all but non-essential services, though the government, police, and hospitals would remain in operation. It is somewhat unclear what businesses might be suspended under the specifications of a level three alert, with some ambiguity remaining about what is classified as essential.

The criteria for announcing level three is three new clusters of COVID-19 within a week or ten domestic cases of COVID-19 with unclear origin. When questioned as to why the new cases today did not lead to the alert level to be raised to level three, the CECC stated that most of the new cases were able to be contract traced, which is why this escalation has not happened. Three cases are of unclear origin.

Chen called on businesses and members of the public to prepare for the possibility of a lockdown, however. As stocks tumbled today, in anticipation of a possible lockdown in what was Taiwan’s largest intraday drop on record, during the press conference, Chen sought to reassure about Taiwan’s industrial capacity.

While there were already two active COVID-19 clusters among China Airlines pilots and among workers at a quarantine hotel used by pilots, the Yilan cluster did not appear to be connected to either cluster. This led the CECC to announce that Taiwan had already entered the community transmission stage of COVID-19 yesterday.

As a result, since yesterday, police inspections of KTVs, entertainment halls, and other establishments were carried out overnight in Wanhua, which has a large elderly population. Disinfection has been carried out in markets, bus stations, and train stations in Luodong, with concerns regarding domestic tourist travel to the Luodong night market. Both Wanhua and Luodong saw cases of domestic transmission. As particular concerns have been raised regarding transmission taking place at KTVs, dance halls, and other entertainment establishments, this could lead to Wanhua’s sizable migrant sex worker population coming under scrutiny from authorities. 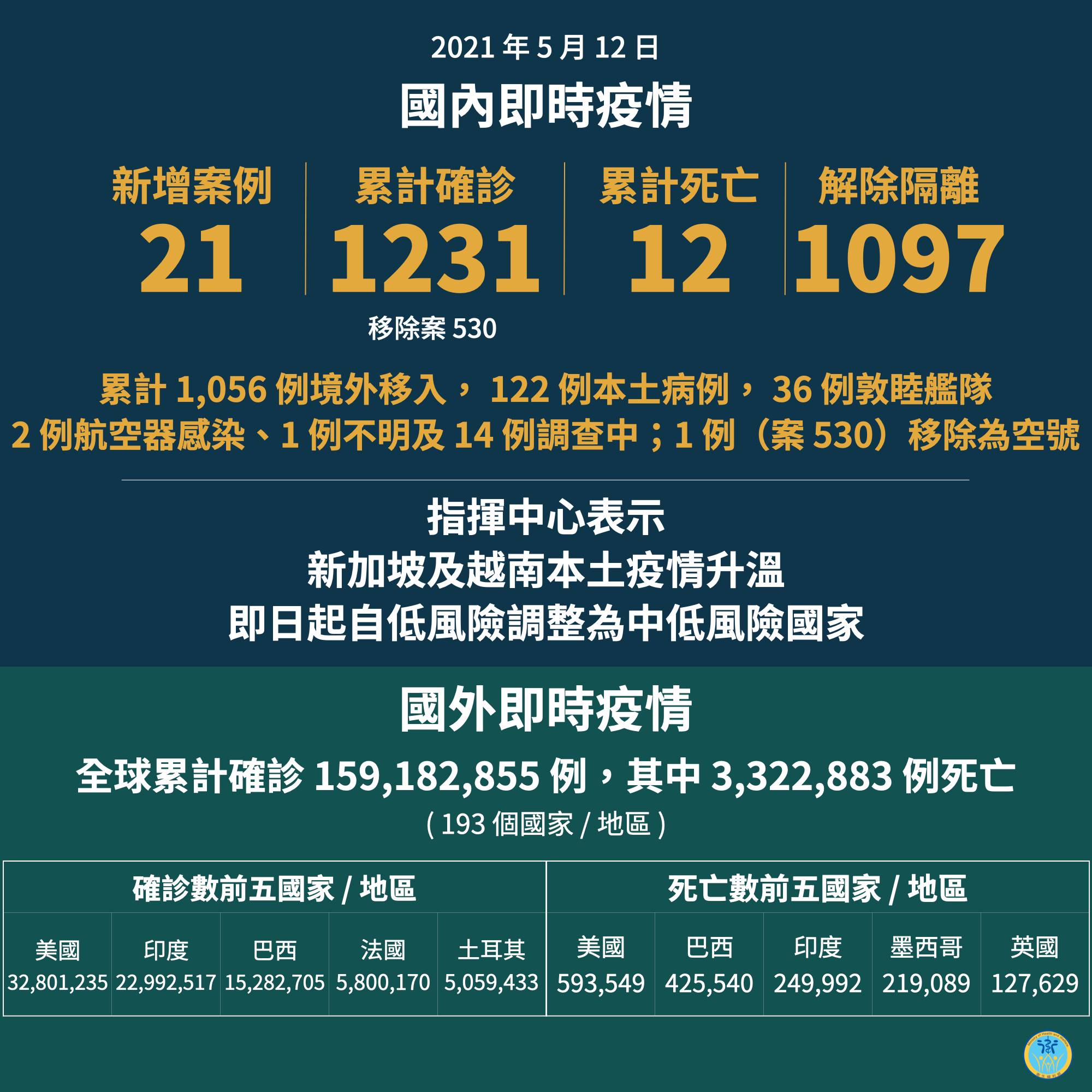 Schools in Taipei and New Taipei have been closed to outside visitors, with graduation ceremonies moved online, and preparations in case there is a need to shift to online teaching. Fast food restaurants such as McDonald’s will begin implementing real-name registration and cancel events scheduled to take place there, which many restaurants have continued to do so through the course of the pandemic.

It is probable that more establishments will follow. New Taipei, which is seen as particularly high-risk, will begin implementing real-name registration for markets and other public places. Hospital visits have been stopped in Taipei, New Taipei, and Taoyuan.

Following yesterday’s announcement of a shift to level two, festival events and other public gatherings have been canceled across Taiwan. Standing tickets will no longer be sold on trains and high-speed rail and eating and drinking will not be permitted on trains. Movie theaters have been called on to restrict attendance to one hundred individuals and not allow eating or drinking in theaters, though it is possible that after today’s new cases, this will lead to more restrictive measures for movie theaters.

Likewise, at the press conference today, Minister of Health Chen called on venues that can implement measures intended to prevent the spread of COVID-19 to do so. Venues that do not comply will face fines and venues that are unable to carry out such measures must close. Chen also called on local governments to make preparations for more quarantine facilities and to ensure that proper measures are being followed at existing quarantine facilities.

The government has sought to reassure that the current stock of medical masks in Taiwan is sufficient, with currently 830 million medical masks in stock, as well as the ability to produce 18 million masks per day and a maximum capacity of 40 million masks per day. Taiwan currently has 2.5 million PPE and over 13 million isolation gowns. With current capacity, more than 40,000 bottles of sanitizing alcohol can be produced per day. During the press conference today, Chen has stressed that distribution mechanisms for medical masks used during the start of the pandemic may need to be readied again.

In response to the new outbreak, President Tsai Ing-wen has called for a national security meeting. The Tsai administration has won accolades for its handling of COVID-19, with Taiwan never having to undergo a lockdown. Nevertheless, Tsai has called on the public to not panic about the new cases, as she also did during previous outbreaks.

But the Tsai administration has been criticized for the sudden escalation in COVID-19 level warning levels, with little warning. The sudden increase in cases may be due to the fact that COVID-19 variants currently in transmission are probably the more contagious variants that emerged between the start of the pandemic and the present. Moreover, it is possible that travel due to large-scale religious festivals over the past month allowed for the further spread of COVID-19.

Since the announcement of the new cases, vaccination rates have been on the uptick. The rate of vaccination in Taiwan has been slow. This may be due to members of the public not feeling that vaccines are necessary with the COVID-19 situation under control, or skepticism of the AstraZeneca vaccine, which is currently the only vaccine available in Taiwan. Nonetheless Taiwan currently only has 199,200 doses of the AstraZeneca vaccine, which are set to expire later this month. 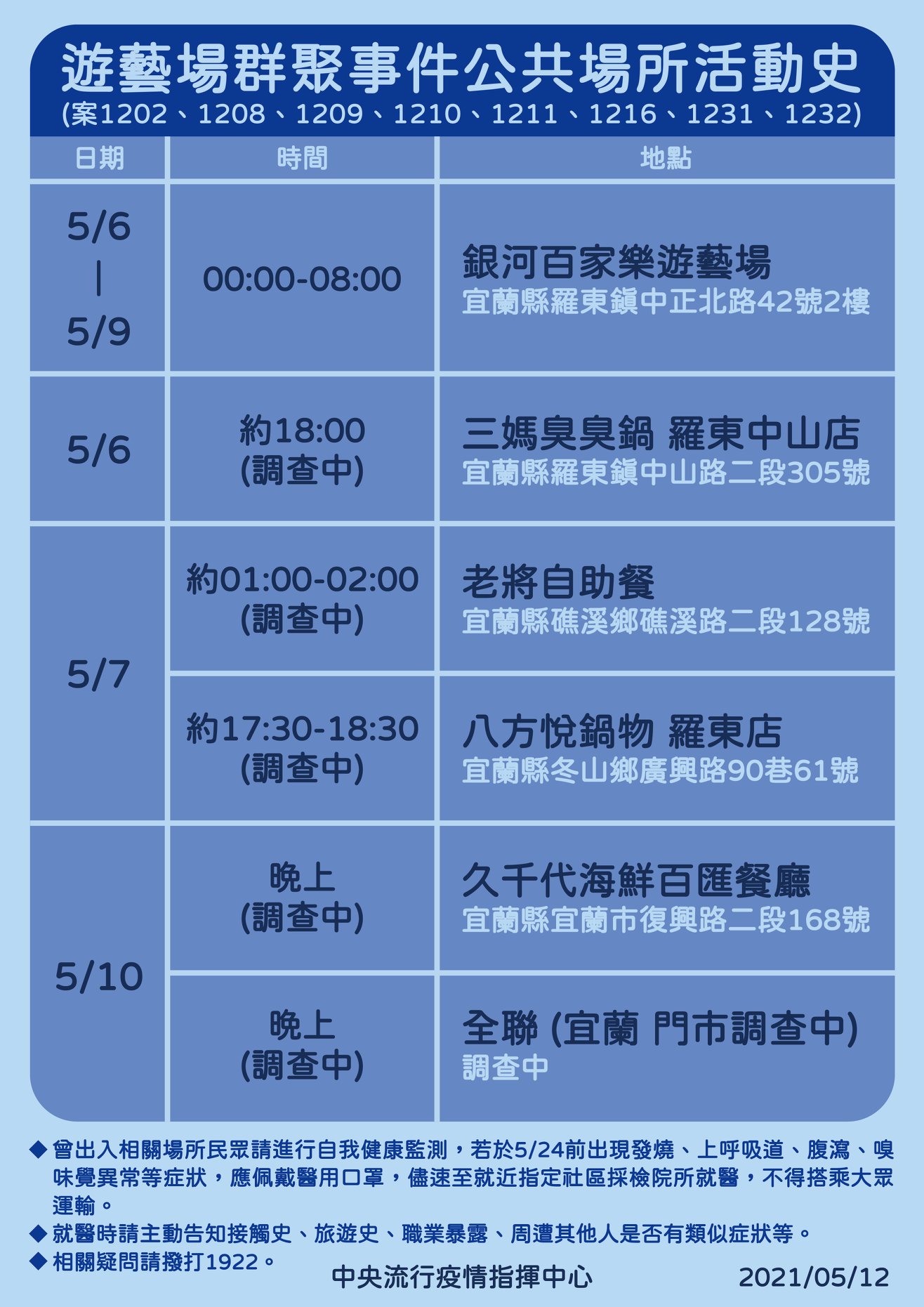 Shortly after Chen’s press conference this afternoon, the Taipei city government announced that it would shift to level three alert status. Activities organized by the city government, public venues will be closed, and all religious activities have been cancelled. It is unclear whether this will lead to broader cancellations until June 8th, as well as whether this is an attempt by Ko to one-up the central government, attempting to appear more proactive than the Tsai administration. As with the unclear details of what level three alert status would mean for the central government, so, too, with Taipei.

It is possible that other cities will follow suit with Taipei. But, as seen with the Taipei city government, it is likely that following the wave of new cases, there will be some push and pull between the central government and local governments. Contestation may take place whether uniform policy is to be rolled out nationwide for measures enacted in public venues, or if local governments will be allowed to implement measures at their discretion. This, too, may become an issue that is contested between local pan-Blue governments and the Tsai administration, as has occurred many times during the pandemic to date.