The Central Epidemic Command Center (CECC), which coordinates Taiwan’s response to COVID-19, announced the new cases earlier today. The cases have been traced back to a baccarat hall in Yilan county.

In particular, there were already concerns regarding two COVID-19 clusters, one of which is among China Airlines pilots, and the other of which was among workers at a quarantine hotel at which China Airlines pilots and pilots of other carriers were staying, the Novotel Taoyuan International Airport. 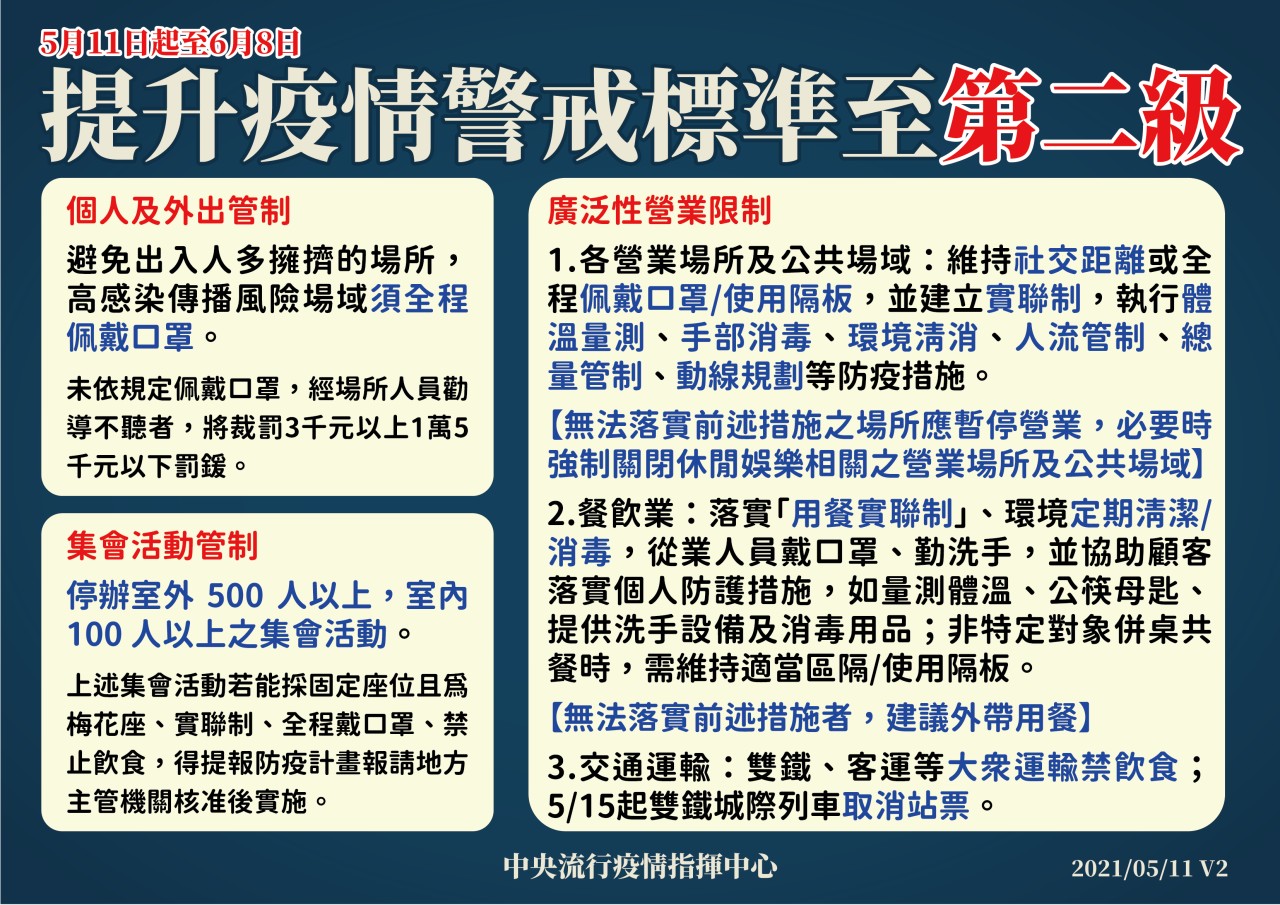 Subsequently, the CECC ordered that China Airlines pilots be divided into a “safe” group of individuals that had quarantined for fourteen days and tested negative for COVID-19, who would be allowed to spend time with their family members and go to public spaces. Pilots that have not undergone quarantine would still be allowed to work, but would not be allowed to interact with the “safe” group. China Airlines has stated that this will only affect 10% of its pilots, though this resulted in the reduction of cargo flights by the air carrier.

One new case of domestic transmission linked to these previous clusters was also announced today. What is concerning about the Yilan cluster, however, is that it does not seem to be linked to the China Airlines cluster or the Novotel cluster. As stated by Minister of Health Chen Shih-chung, this means Taiwan has entered into the community transmission stage of COVID-19, seeing as it is unclear where individuals from this cluster caught COVID-19.

Another case of COVID-19 announced today has unclear origin, though the patient in question does not have any travel history. Contract tracing is under way for the newly infected, while the baccarat hall in Yilan has been shut down and disinfected. The travel histories of individuals part of the cluster have been publicized.

In the meantime, graduation events scheduled in Taipei and Taoyuan will transition to taking place digitally. Eid al-Fitr events in Keelung and Yilan have been canceled, while events in Tainan and Pingtung will be held outdoors with 300 guests. Events planned in Hualien, originally planned to have 800 guests, could also see limits.

The hot air festival in Yilan’s Dongshan township that would have been held from May 29th to June 5th has been canceled. Taiwan’s professional basketball league, the P.League+, has announced that playoffs and finals will take place without fans in attendance, and Taiwan’s Chinese Professional Baseball League, will move to staggered seating and forbid eating and drinking at events.

Staggered seating and forbidding eating and drinking may also take place at theaters, with movie theaters urged to limit attendees to 100 individuals per theater. Trains and high-speed rail have announced that standing tickets will no longer be sold and eating and drinking will not be allowed on trains. 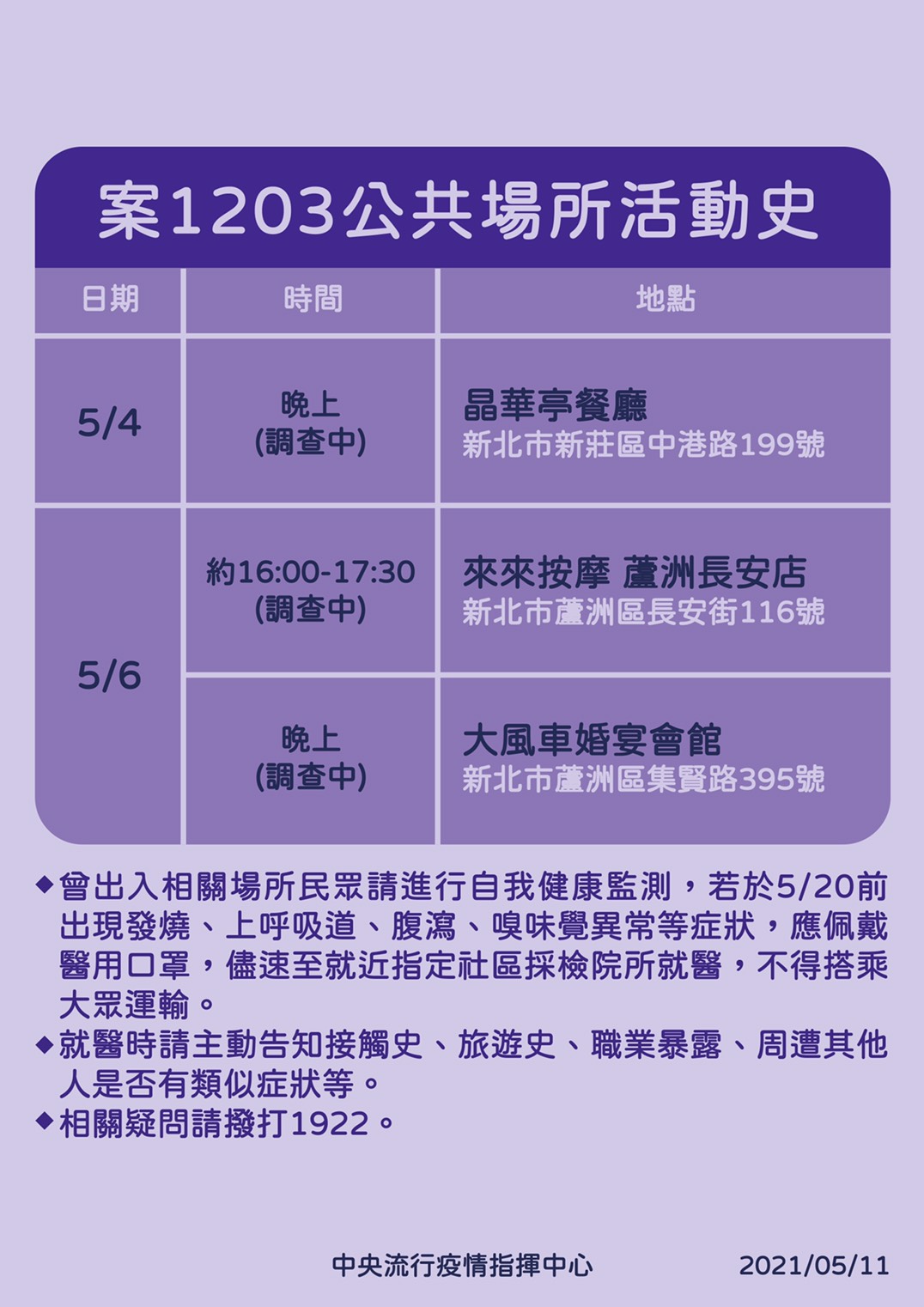 Travel history publicized by the CECC for one of the new cases. Photo credit: CECC/Facebook

With the resumption of community transmission in Taiwan, it is to be seen whether contact tracing will allow for detecting the sources of infection. The uptick in the number of cases of domestic transmission today is comparable to last year during the height of the pandemic in Taiwan—but what is key to note is that the COVID-19 strains that are currently in circulation may be the more infectious variants that have emerged between last year and this year. This recent set of cluster infections and January’s Taoyuan General Hospital cluster are among the largest cluster infections to take place in Taiwan during the course of the pandemic.

Rates of vaccination have picked up due to concerns over the new cases. However, that being said, Taiwan’s overall supply of COVID-19 vaccines is still limited to 199,200 doses of the AstraZeneca vaccine, with Taiwan thought to experience delays in vaccine acquisition because of Chinese interference, export restrictions from western countries, or because western countries are reluctant to send COVID-19 vaccines elsewhere before their domestic vaccination programs are complete.

That being said, the Moderna vaccine is set to arrive in Taiwan this month, along with more doses of the AstraZeneca vaccine in June. One expects the resumption of domestic political contestation between the KMT and the DPP as a result of the new cases, with the KMT seeking to attack the DPP for not being willing to accept Chinese-produced vaccines—even as polling seems to indicate that the public remains distrustful of Chinese vaccines. Similarly, questions have been raised as to how the new outbreak will affect the current travel bubble between Taiwan and Palau, seeing as the latter has remained COVID-free during the pandemic to date.