INDIGENOUS GROUPS expressed regret yesterday after a ruling by the Council of Grand Justices yesterday that found some elements of current law regulating Indigenous hunting rights unconstitutional, but mostly upheld them.

The ruling in question was from a challenge to current constitutional law, primarily from the Tama Talum case. Tama Talum, a 54-year-old Bunun hunter, was convicted in 2015 for violating illegal possession of firearms, hunting, and violating the Wildlife Conservation Act. Talum was hunting to obtain meat for his elderly mother, who had difficulty eating store-bought meat and was used to eating game. While Talum did not deny this, he asserted that he had not broken the law. Talum was originally sentenced to a three-and-a-half year jail sentence, but after continued protests regarding the case since 2017, this resulted in the Council of Grand Justices agreeing to hear an appeal for the case. 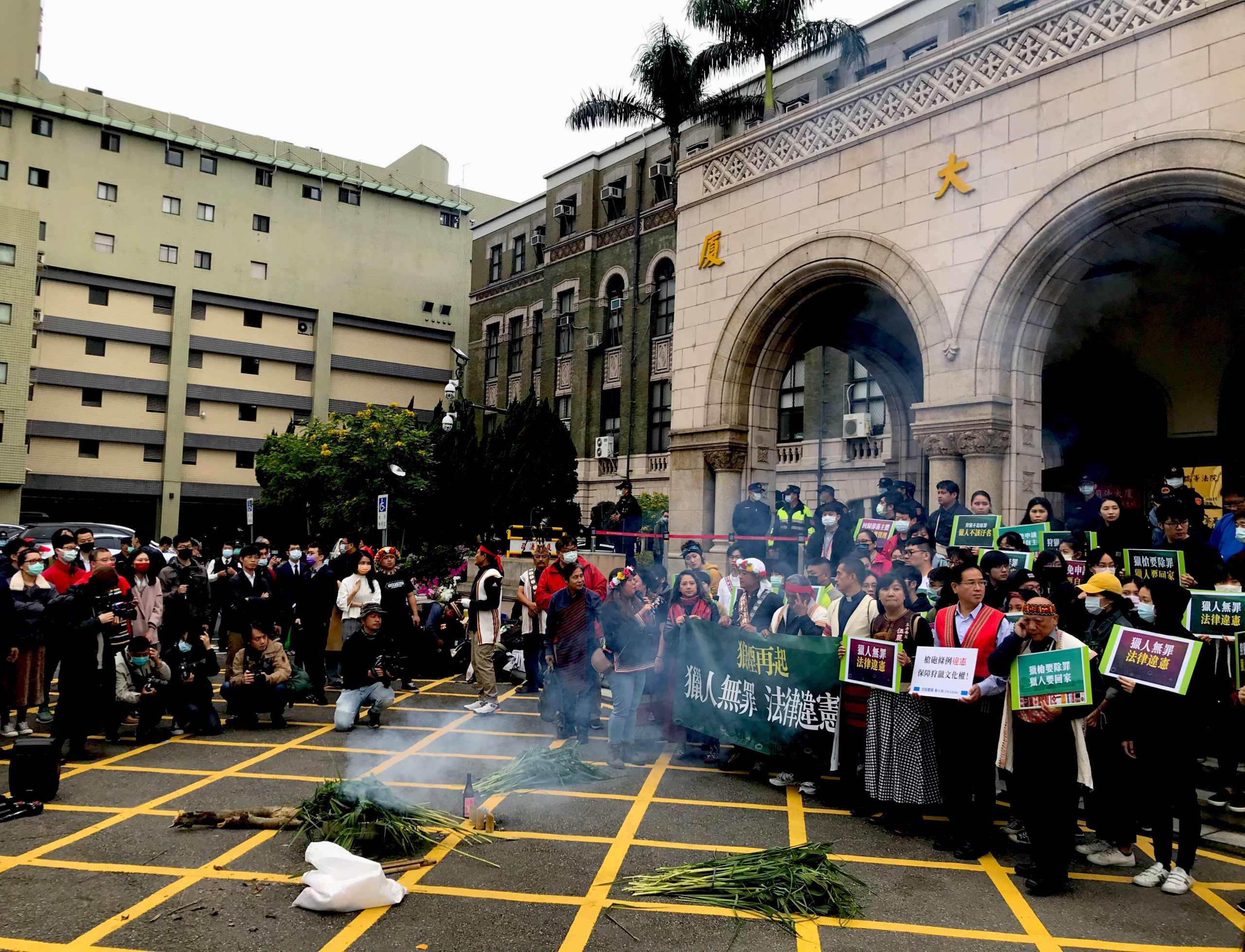 Protest outside of the Judicial Yuan in March, ahead of the start of the hearing on the Tama Talum case. Photo credit: Brian Hioe

As such, the Tama Talum case has become a flashpoint in recent years, regarding when Indigenous traditional hunting practices run up against the ROC state. In the case of Tama Talum, apart from providing his mother with meat, Talum was attempting to practice traditional hunting practices that should have protection in the Indigenous Peoples Basic Law, but he fell afoul of firearms and wildlife conservation acts.

Although the Tama Talum case is far from the only case of Indigenous being arrested in Taiwan for hunting in past years, it is by far the most famous one. Talum was later joined in his challenge against current constitutional law by Pan Chih-chiang, a Puyuma man facing similar hunting charges.

In particular, Indigenous are only permitted to use handmade firearms, that load from the front, rather than modern firearms. Although handmade firearms could potentially be dangerous, seeing as many are old and difficult to repair, law enforcement authorities claim that this prevents firearms being used for purposes outside of hunting, seeing as it takes longer to load front-loading firearms. Indigenous activists have, among other justifications, cited that modern firearms are less painful for the animals that they shoot.

Likewise, Indigenous are required to register ahead of time with the government regarding what game they intend to hunt. That is, Indigenous are required to apply five days in advance before hunting and to specify what number of what species they intend to hunt. This occurs despite traditional religious views for some Indigenous groups that what they hunt is given to them by the gods, and so one cannot know beforehand what will be hunted.

The ruling found current laws regulating handmade firearms unconstitutional, as well as provisions requiring Indigenous to apply five days before hunting while specifying what is to be hunted. However, the ruling does not permit Indigenous to hunt endangered species, or the purposes of commercial use. Consequently, the National Police Agency must amend laws regulating firearms within two years. The Ministry of the Interior has stated that it will work with the Ministry of National Defense to supply Indigenous hunters with spare parts for rifles, so that they do not have to worry about unsafe guns.

An overnight protest was held by Indigenous activists in March before the start of the hearing by the Council of Grand Justices on the case. Indigenous activists have reacted against what they view as the continued imposition of colonial law on Indigenous, as well as Indigenous unfairly being blamed for endangering vulnerable species, emphasizing that Indigenous traditional practices are ecologically conscious.

Many were surprised by the ruling, seeing as there were many legal firsts that took place during the case, including the Supreme Court taking the initiative and appealing to the constitutional court, or the judiciary making provisions for the trial to be livestreamed. Notably, current president Tsai Ing-wen made it a campaign promise to resolve the case in 2016, but has taken little action since. Yet what could have otherwise been a landmark case in making legal provisions to defend the cultural rights of Indigenous has resulted in an unfavorable outcome. 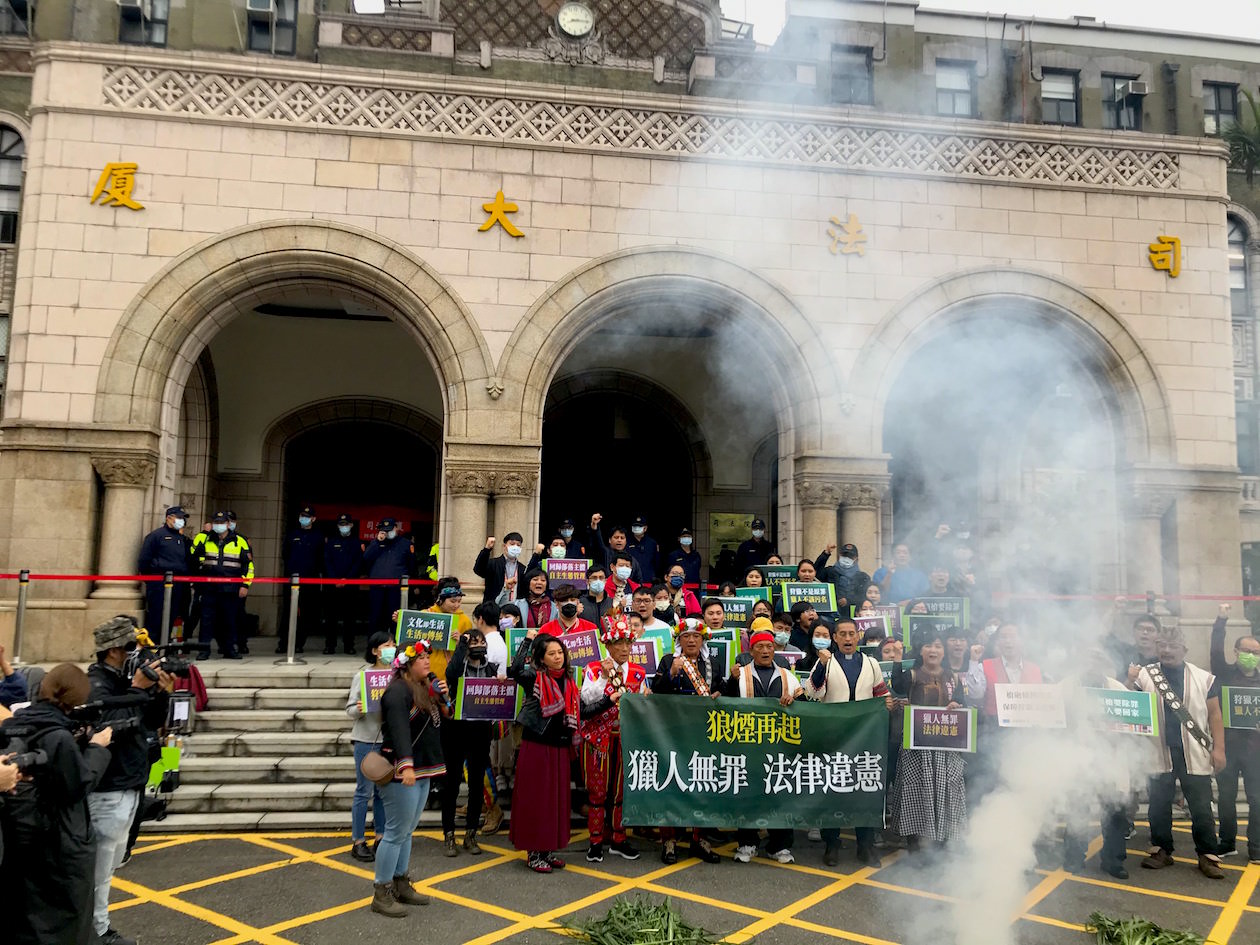 Tama Talum himself has stated that he will continue hunting until he dies. While the ruling does not directly apply to the Tama Talum case, it is generally seen as highly unfavorable to him. As stated by Hsieh Meng-yu of the Legal Aid Foundation, although this is the first time courts have recognized Indigenous hunting as “a cultural right that should be respected and protected by the state,” the ruling was 90% against Talum.

The Supreme Court will again hear the Tama Talum case after the ruling, meaning that it is still possible that Tama Talum will be sentenced to a jail sentence. Likewise, seeing as the case took place because of hunting by Talum in 2013, this means that the Tama Talum case has dragged on for close to a decade. Given this, one expects the strong possibility of protests by Indigenous groups in the near future.