A DEMONSTRATION was held in front of the Legislative Yuan today by cannabis legalization advocates. The timing of the event was held to coincide with 420, referring to April 20th, a day for the celebration of smoking cannabis internationally. However, as 420 falls on a Tuesday this year, the rally was held today on a Saturday instead.

Hundreds were in attendance for what was the second 420 cannabis legalization rally in Taiwan, then, with the first rally having taken place in 2019. Many attendees were young people, many of which were dressed in green or clothing with cannabis iconography. Last year’s rally, which would have been the second 420 rally otherwise, was canceled due to the COVID-19 pandemic. However, with the COVID-19 situation under control in Taiwan, Taiwan is one of the few places in the world able to publicly commemorate 420 this year. Taiwan has never had to undergo a lockdown and there have only been 1,072 cases through the course of the pandemic, with eleven deaths. 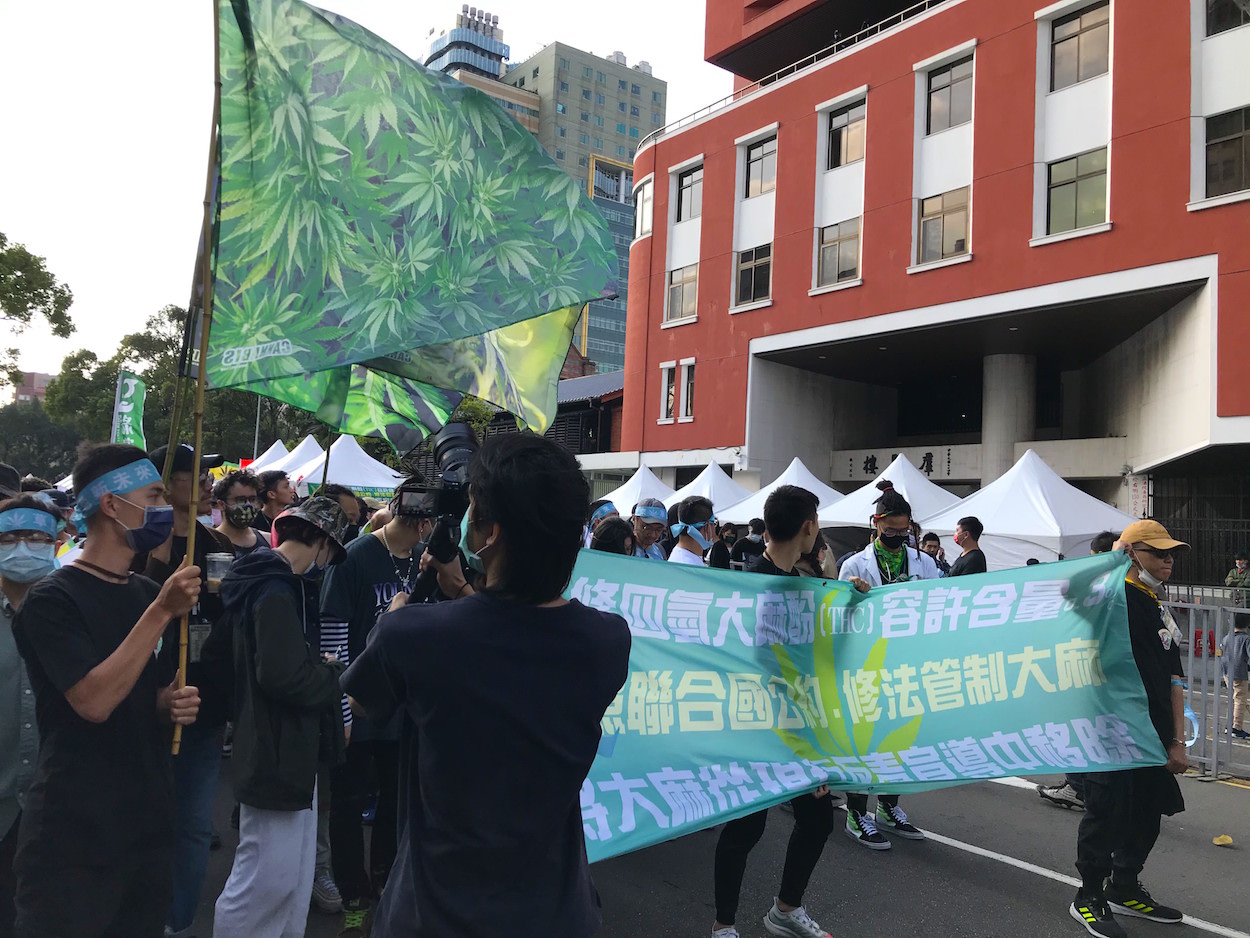 An outdoor market was held on Jinan Road next to the Legislative Yuan’s Qunxian Building starting at 12 PM today. Among the groups and organizations that set up stalls were the Green Party Taiwan, advocacy groups such as 420 Taiwan, podcasting company Ghost Island Media, and law firm Better Call Zoe, which specializes in handling cannabis-related cases. Vendors of hemp and CBD products also set up stalls, as did a number of food vendors, many of which sold food themed around cannabis. The primary organizer of the event was a group called Green Sensation 2.0.

Talks were held from 1 PM until just after 4 PM. A number of the speakers were doctors and lawyers involved in medical or legal advocacy for cannabis. This includes lawyer Zoe Lee, who runs Better Call Zoe and ran as a Green Party Taiwan candidate in 2020 elections, and doctors Kong Fan-jin and Lai Yan-ge, among others. 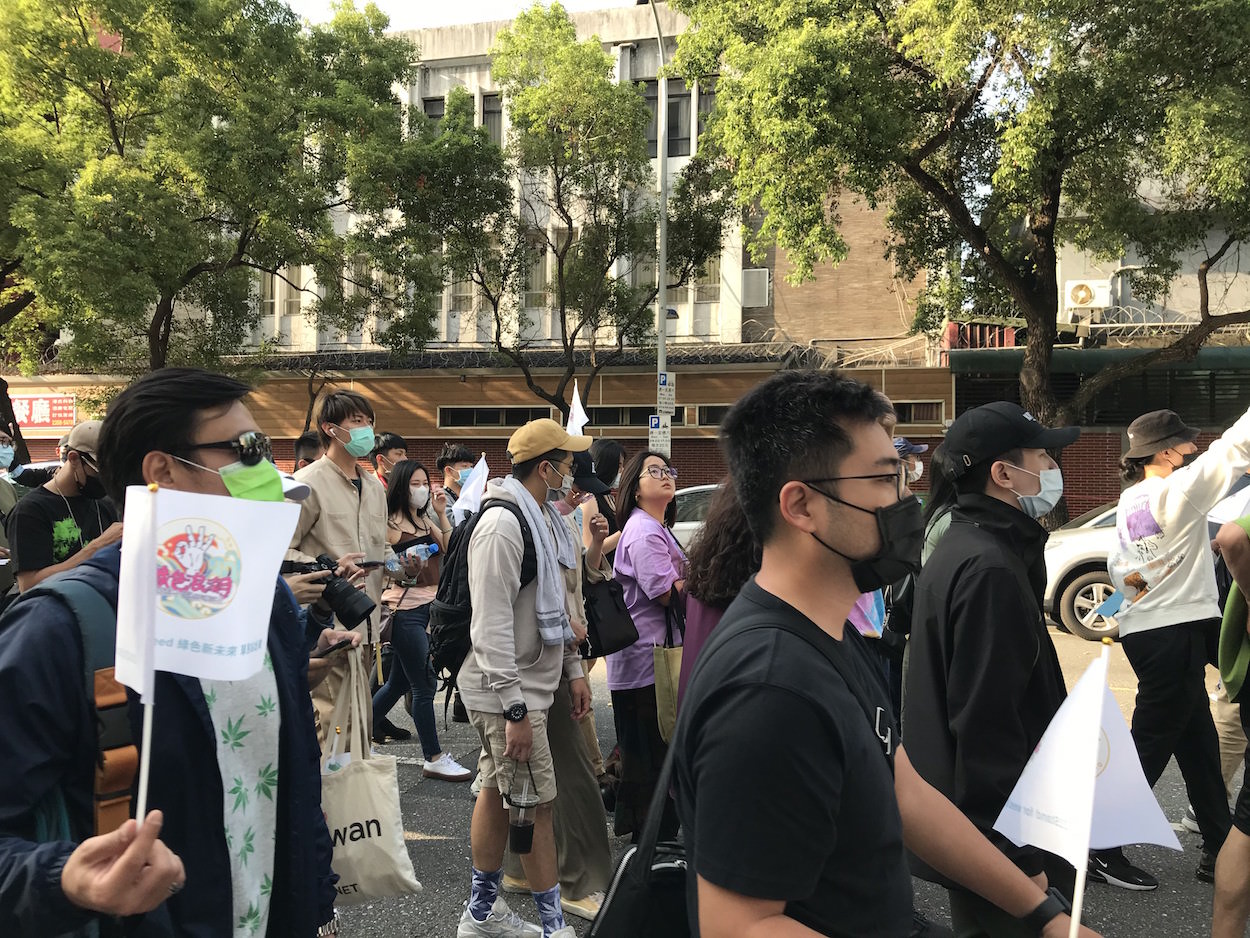 At 4:20 PM, a short march set off from the outdoor market, circling around the Legislative Yuan before returning to the market. In this sense, the parade was primarily symbolic, with participants shouting slogans to make the government hear their demands. Twenty minutes later, the march had returned to the site of the outdoor market.

After the march returned to its original site, a series of musical performances took place. Among the performers was Panai Kusui, the well-known Indigenous singer-songwriter close to Taiwanese activism, who performed at President Tsai Ing-wen’s inauguration in 2016, and who has been maintaining an occupation calling for the return of Indigenous traditional territories for several years. Other performers included No-Nonsense Collective, a heavy metal band with politically radical leanings, leatherlattice, Analogy Thoreau, Dr. KIANG, Pachinko, Hsie He-hsian, 41/Dada, and 1ChillNation. A follow-up event around the issue of cannabis decriminalization will also be taking place next week at Pipe Live Music, featuring a number of DJs. 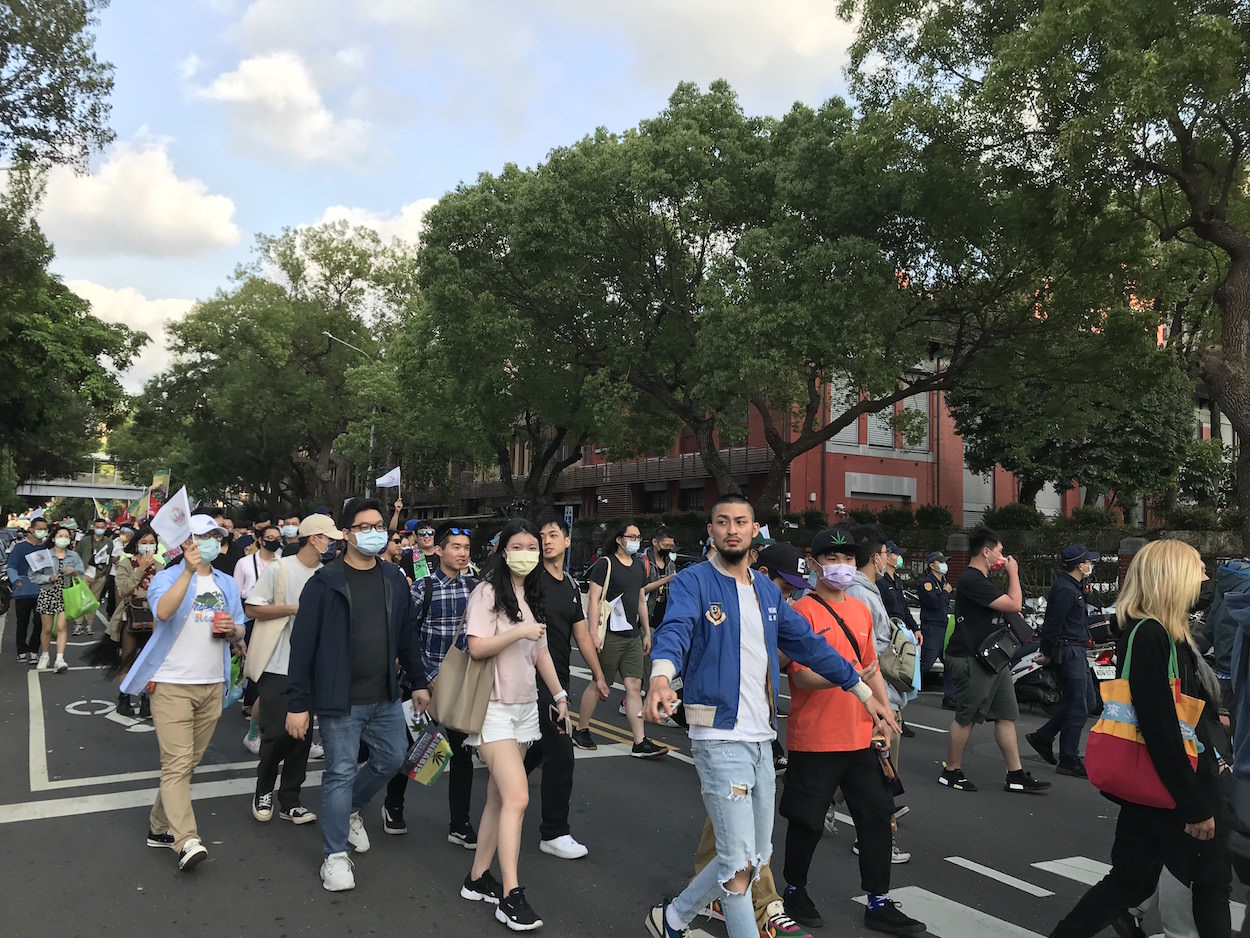 The demonstration today had three primary demands. The first demand was that cannabis usage be destigmatized in Taiwanese society. The second demand was that the amount of legally allowed THC in hemp be raised from .001 percent to .3 percent, which the standard used in the US. The third demand was to remove cannabis from the list of narcotics drugs, citing that this is what current international trends are—the UN Commissions on Narcotic Drugs removed cannabis from its list of narcotics drugs last December. Likewise, many signs on placards at the demonstration called for legalizing the use of medical marijuana.

A number of progressive younger politicians in Taiwan support the decriminalization of cannabis in Taiwan, including activist musician turned independent legislator Freddy Lim and Chen Po-wei of the Taiwan Statebuilding Party. Both have cited cannabis decriminalization as one place in which Taiwan lags behind international trends. 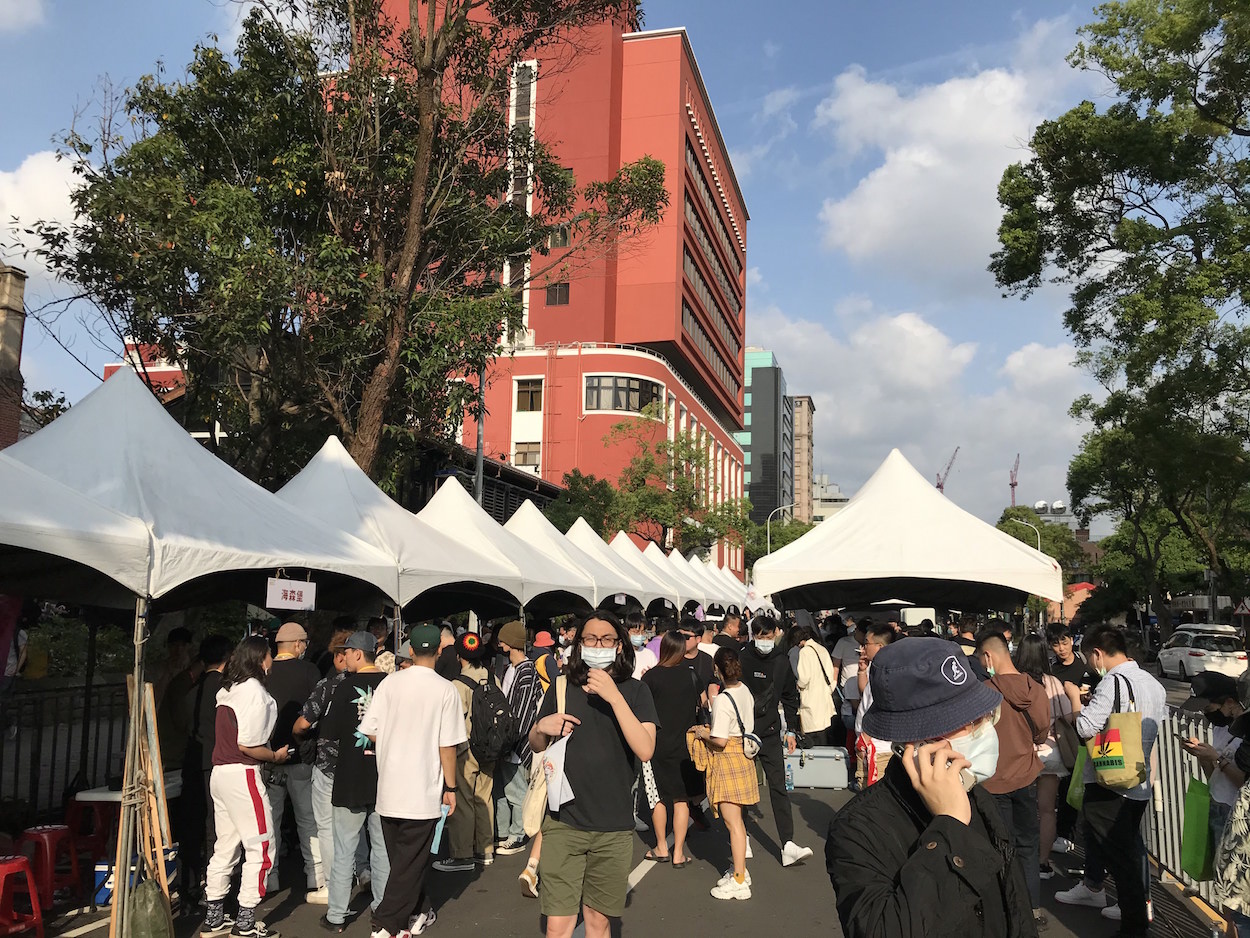 Yet given that Taiwan often looks to the US for legal precedents and that drug laws in Taiwan are often based on US drug laws, the decriminalization of cannabis in many US states may add weight to the push for decriminalizing cannabis. The cabinet proposed lowering the penalty for growing cannabis for personal use earlier this month. 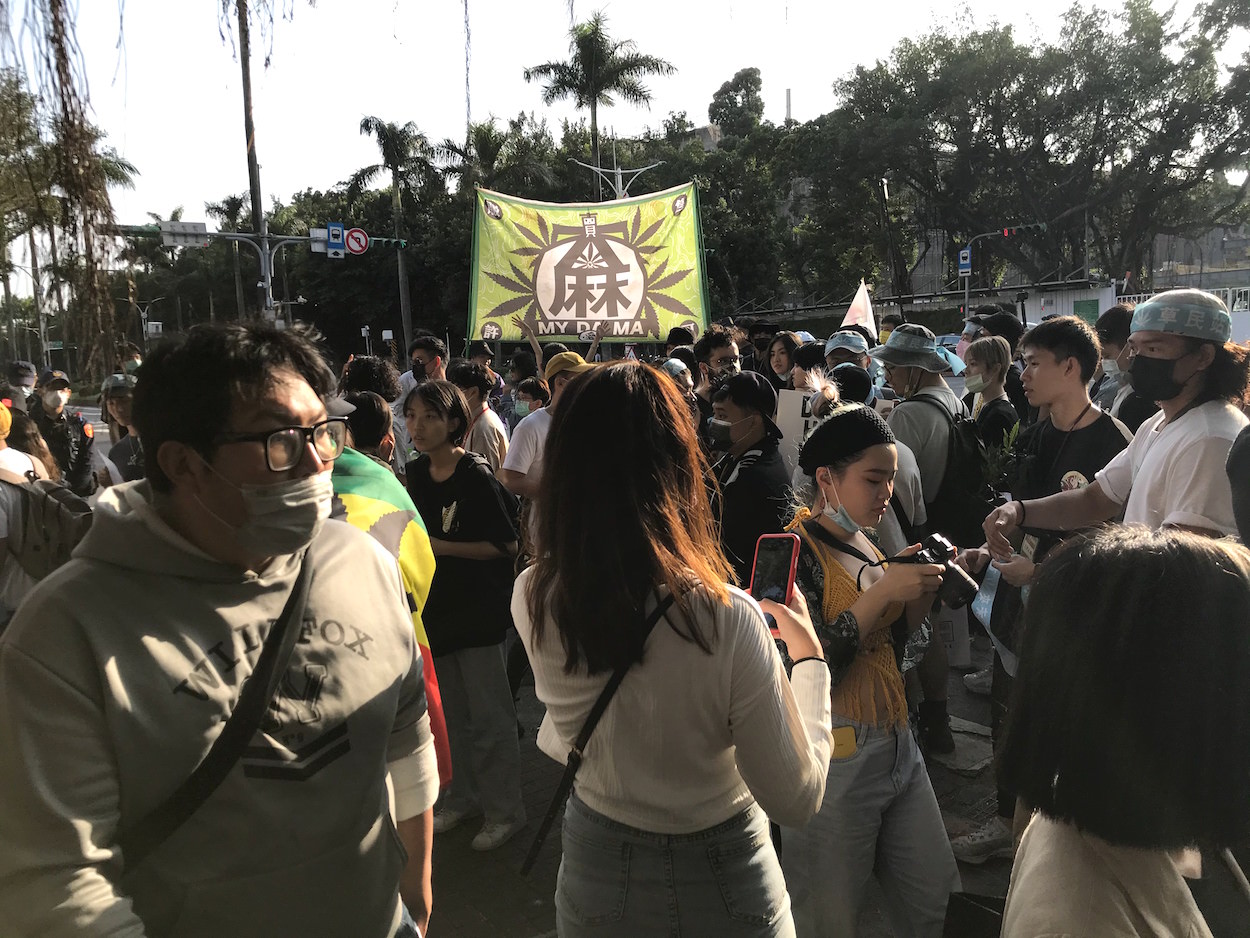 That being said, laws regarding drugs in Taiwan remain highly draconian. Steep sentences on cannabis possession or the sale of cannabis result in lengthy jail sentences, and there is severe social stigmatization of drug users. Sometimes younger, progressive politicians—whether advocates of cannabis decriminalization or not—have been attacked with accusations from conservative opponents that they are drug users. Such social attitudes are not likely to change overnight, but may require long-term advocacy.