AS DEMONSTRATIONS against Asian hate are staged across the United States, about eighty people gathered this morning at 8:30 AM in front of Taipei City Hall for a march against anti-Asian racism and misogyny in light of the rise in hate incidents against Asian Americans and Pacific Islands (AAPI) in the United States and the March 16th Atlanta spa shootings, which claimed the lives of eight people, six of which were Asian women. 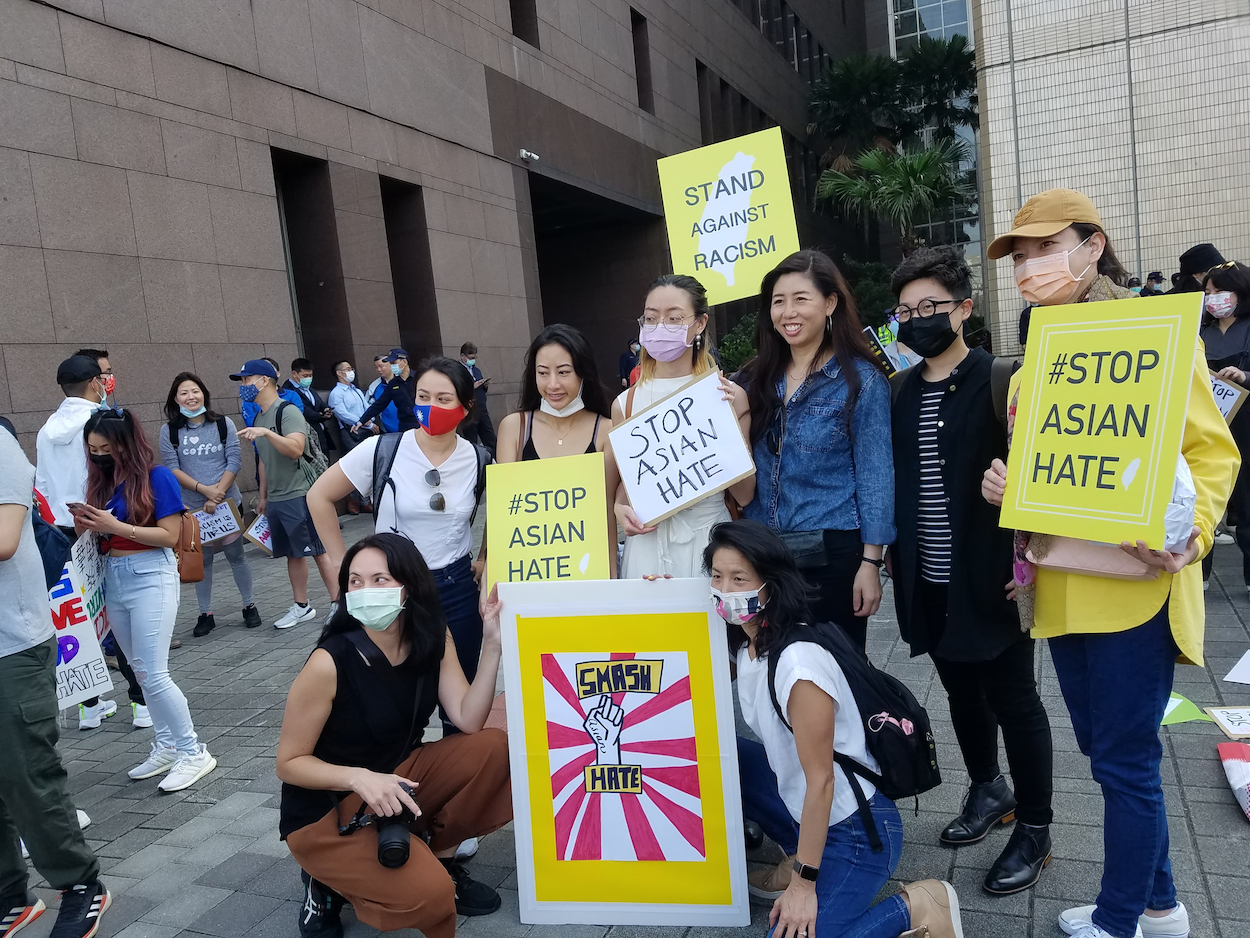 Marchers gather early in the morning at 8:30AM in front of Taipei City Hall. Photo: Daniel Yo-Ling

One of the march organizers, Reichi Lee—born and raised in Taipei and recently returned from Berkeley, California—spoke first, stating “We march to raise awareness about the rising racism and misogyny against [Asian American and Pacific Islanders] in the United States and other parts of the world.” The Taipei march was organized by a group of AAPI women in Taiwan to coincide with other US-based demonstrations happening on March 26th, such as the #StopAsianHate Virtual National Day of Action and Healing and adjacent #StandWithAsians programming. 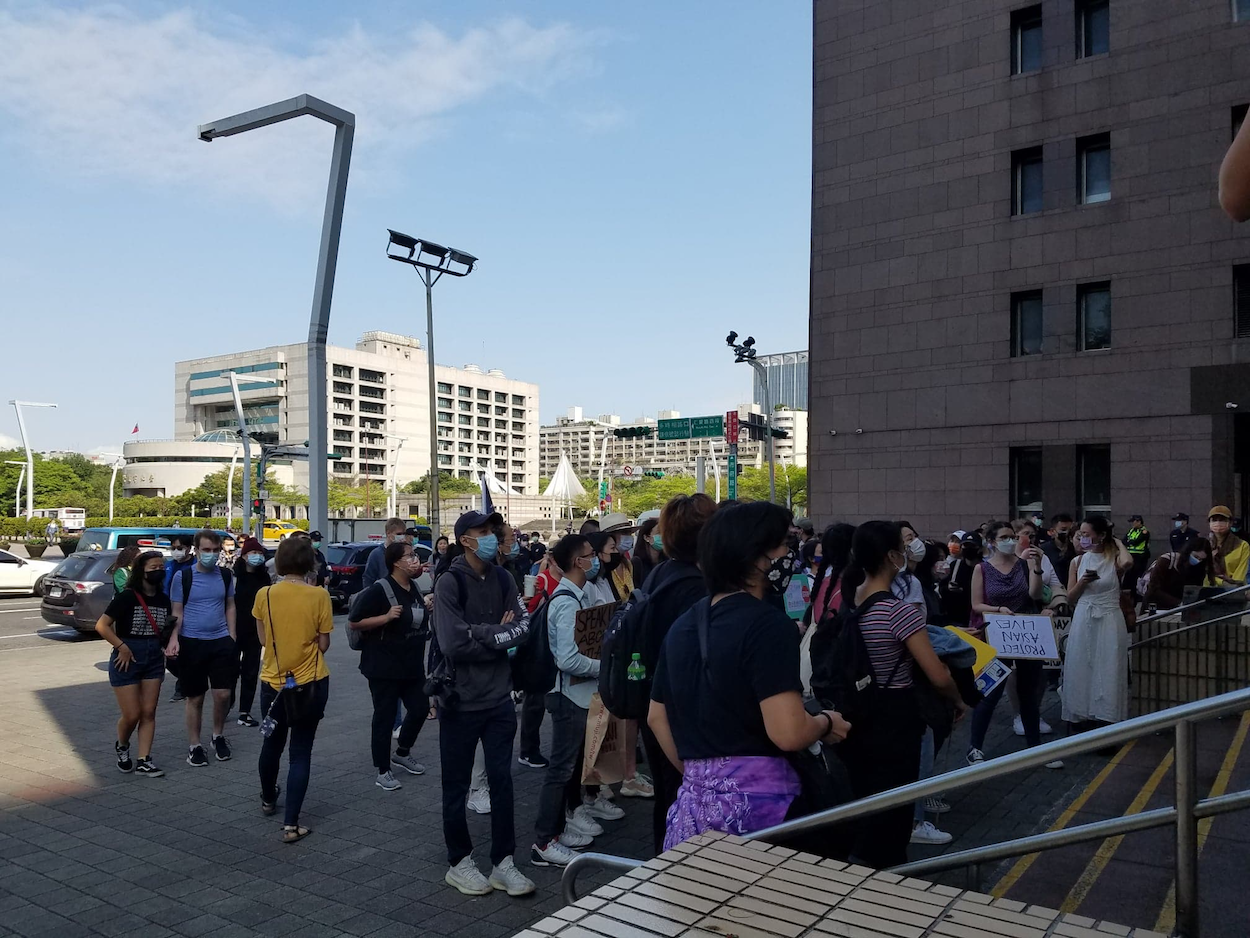 With over four times the net inflow of Taiwanese nationals returning to Taiwan in 2020 compared to the previous year, there is a significant group of Taiwanese and dual-nationals who have returned to Taiwan. This morning’s march was attended by primarily Taiwanese and Taiwanese diaspora, as well as a significant contingent of English-speaking foreigners. Speakers gave speeches in both English and Mandarin. Taiwanese American non-binary activist Darice Chang spoke on behalf of Women’s March Taiwan stating, “Here in Taiwan, the Asian American diaspora worries for our families and loved ones abroad where racialized violence against Asian Americans has risen during the pandemic.” 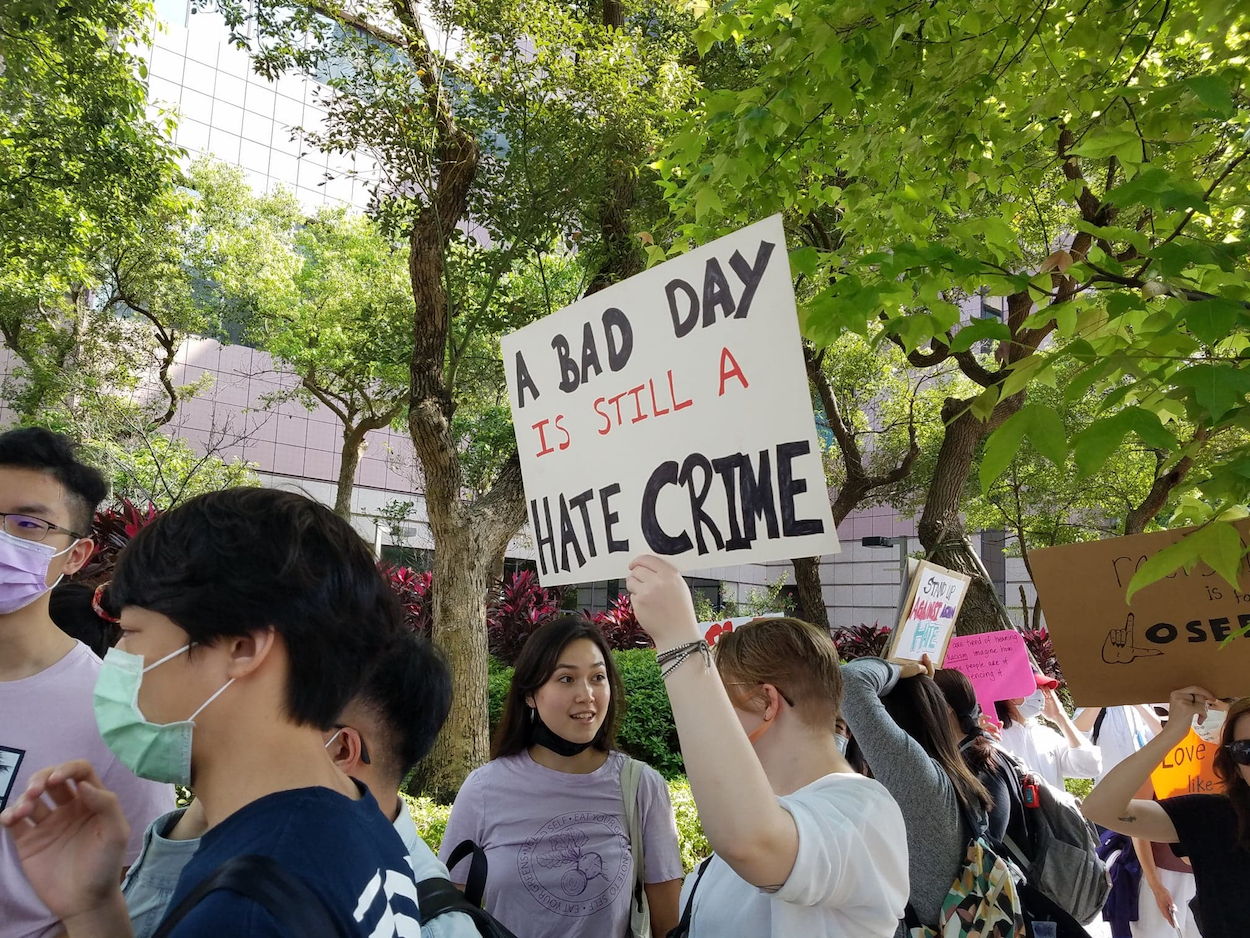 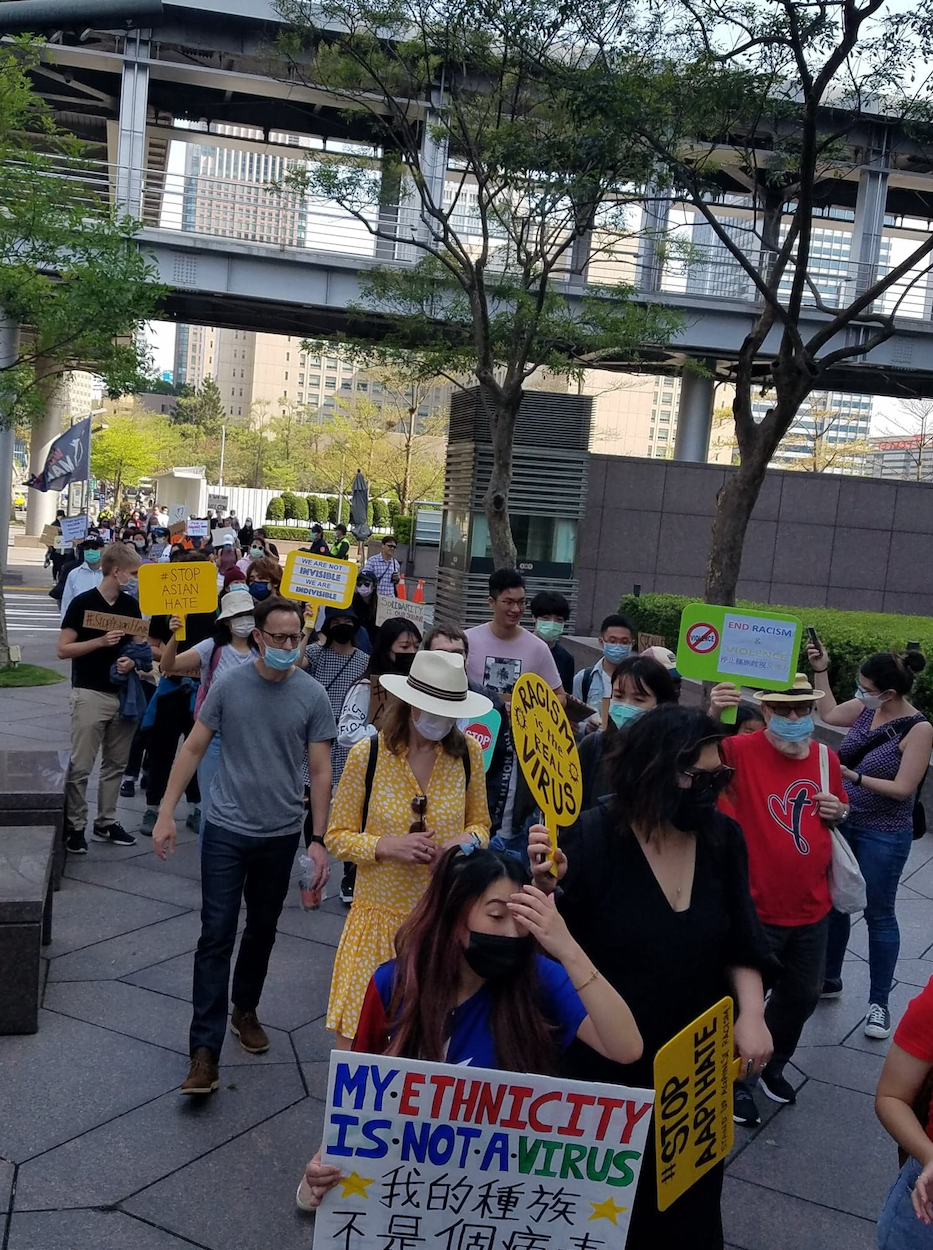 Similar to the variety of actions being advanced in the United States in response to the increase in anti-Asian hate incidents and the Atlanta shootings, participants in the Taipei march espoused a range of political actions. Olivia Chen, a Taiwanese American living in Taipei and the San Francisco Bay Area, co-founder and executive director of Project EMplify, emphasized that “Hate crimes against Asians need to be logged as hate crimes … [because] it sends a message to the greater community that those kinds of incidences cannot and should not happen.” 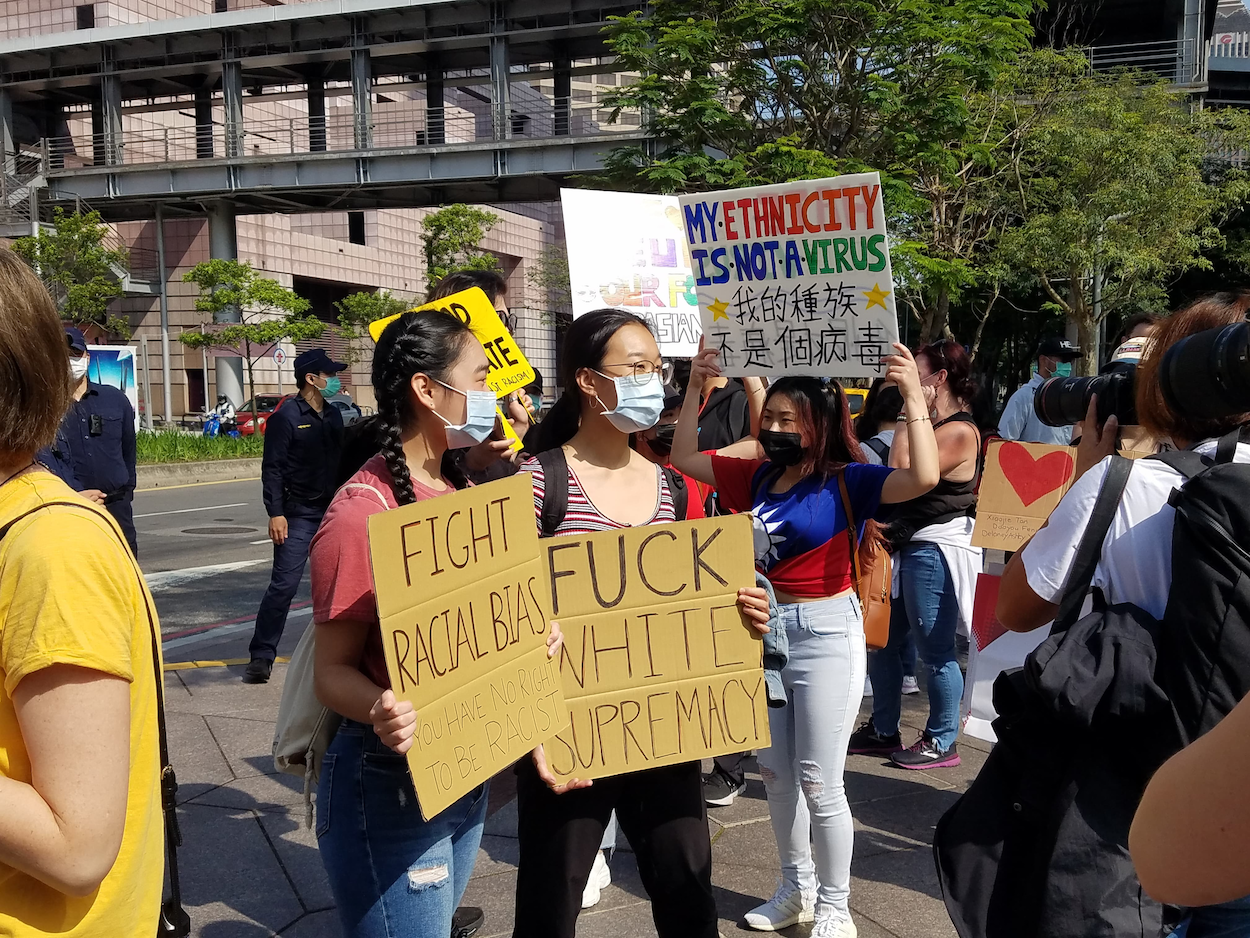 Marchers pose for a photo as they wait on Xinyi Road for a stoplight. Photo: Daniel Yo-Ling

Another speaker, Taiwanese scholar and New Bloom editor Wen Liu, sympathized saying “I know a lot of people are calling for that [hate crime legislation], but if you look at the history, hate crimes are never preventative, they are always about increasing punishment, increasing police. In that way, if we demand that [hate crimes], Asian American movements or global Asian movements are going to be farther away from other people of color who are struggling to end police violence.” The utility or futility of hate crime legislation and carceral thinking amongst Asian Americans has been the subject of much conversation in recent months in the US, especially as it relates to questions of abolition and Black-Asian solidarity. These tensions could also be seen across the Pacific here in Taipei this morning. 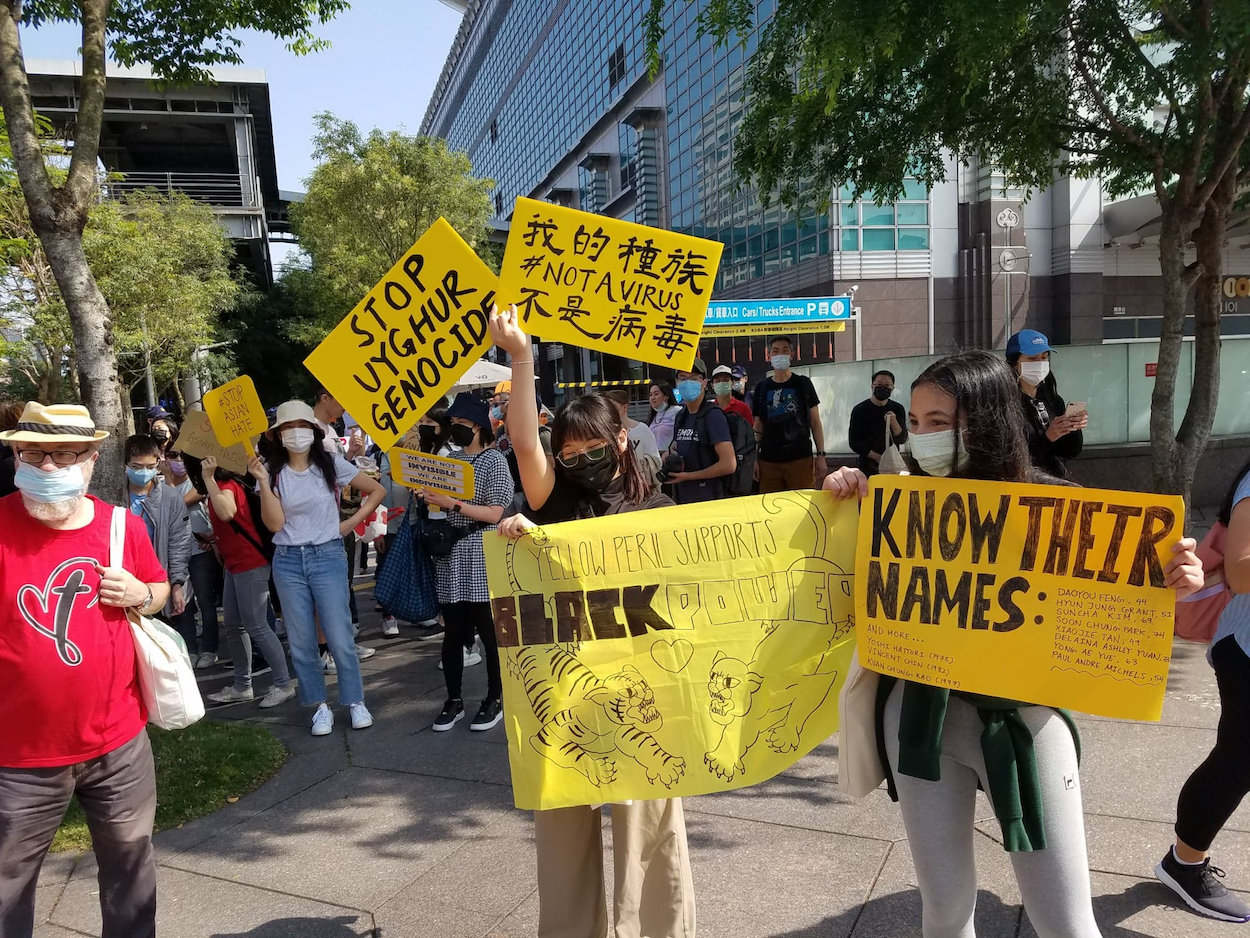 Marchers left Taipei City Hall and headed toward Liberty Plaza along Xinyi Road. As participants marched, more people joined in, with the crowd reaching over 100 at its highest point. Signs by marchers also reflected a variety of framings and positions, with some emphasizing racial bias, others white supremacy, and still others calling for broader solidarity that would include Uyghurs being persecuted in Xinjiang and Black people in the United States. 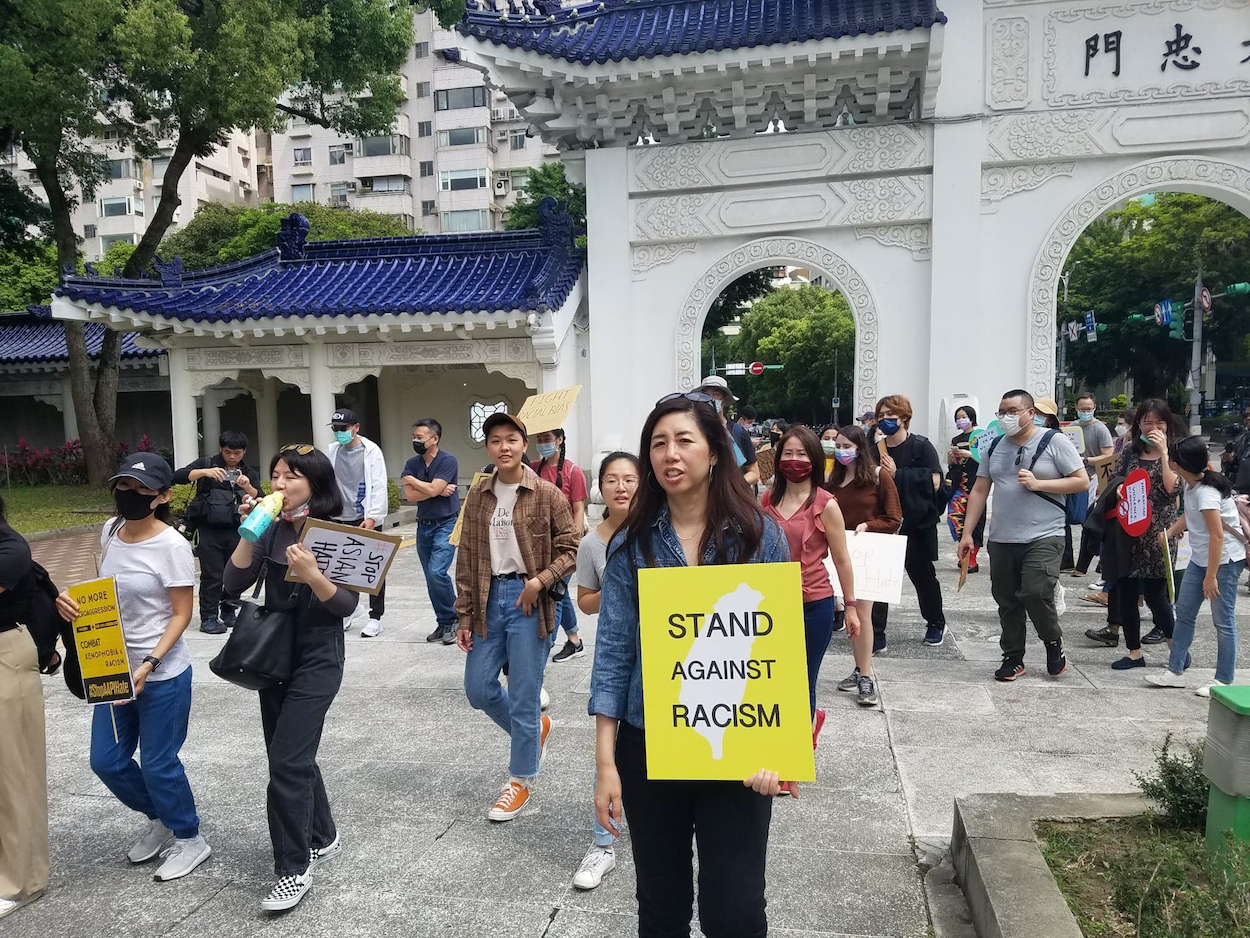