TIBETAN GROUPS rallied outside of the Zhongxiao Fuxing SOGO on Sunday, March 3rd, beginning at 1 PM. After an hour of speeches outside the SOGO, a march was held that then proceeded to Taipei 101, setting out at 2 PM. 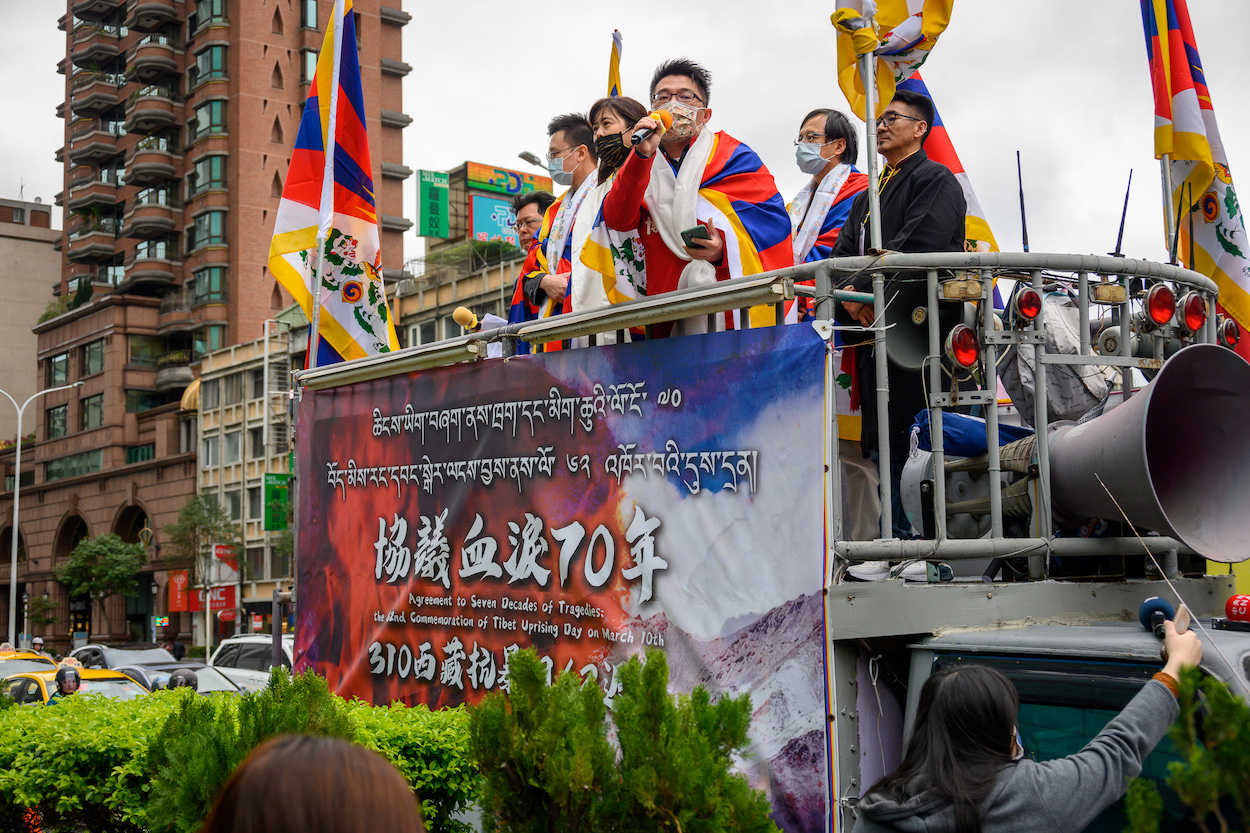 A march is held annually in Taipei to commemorate Tibetan Uprising Day, which remembers the 1959 Tibetan uprising against Chinese occupiers in Tibet. The annual march usually begins outside of the Zhongxiao Fuxing SOGO. This year the decision was made to hold the march on the Sunday before Tibetan Uprising Day on March 7th and to hold a prayer ceremony at Liberty Plaza on March 10th.

Around 100 were in attendance. Participants included Tibet advocacy groups in Taiwan such as the Human Rights Network for Tibet and Taiwan, the Taiwan Tibetan Welfare Association, the Students for Free Tibet, stalwarts of pro-Taiwan civil society such as the Dr. Chen Wen-chen Memorial Foundation, the Taiwan Association for Human Rights, Amnesty International Taiwan, and other groups. Protest chants included “Tibet belongs to Tibetans” and “Free Tibet,” and various Tibetan chants. Many members of the Tibetan diaspora in Taiwan were present, including many monks. Prayers were held before the march set out, as well as during the march itself. As with last year’s march, many demonstrators wore or carried Tibetan flags, or wore face masks with the Tibetan flag on it. The rally was noticeably smaller than last year, however. 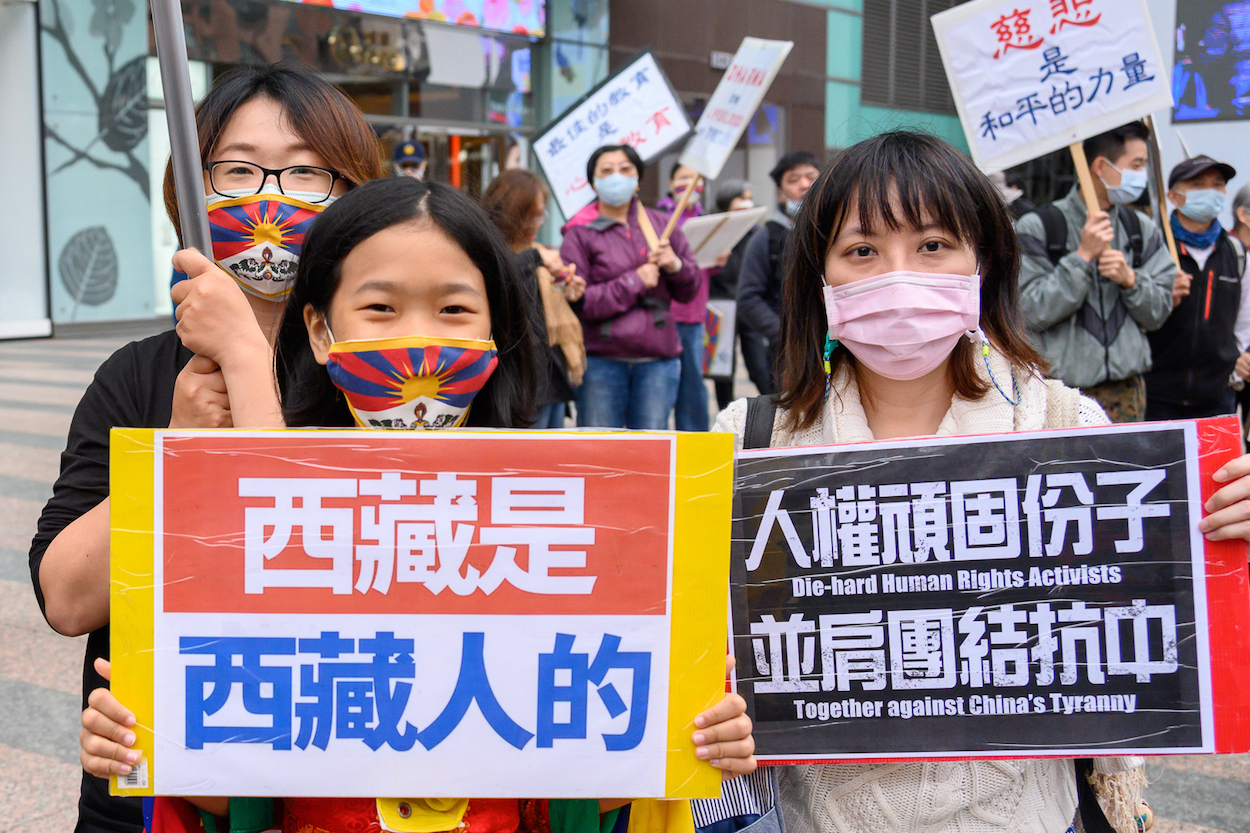 A number of progressive pan-Green politicians were present, including members of the DPP, NPP, SDP, Green Party, and TSP, as well as independent politicians formerly part of the DPP. The omission of the KMT and TPP was noticeable. According to organizers, all political parties that currently hold electoral representation were invited to attend, but only the DPP, NPP, SDP, and TSP sent representatives.

Many of the politicians present were part of the Taiwan Parliament Group for Tibet, the legislative caucus regarding Tibet-related issues, or its Taipei city council equivalent, the Taipei City Council Tibet Caucus, which was represented by independent city councilor Lin Yin-meng. 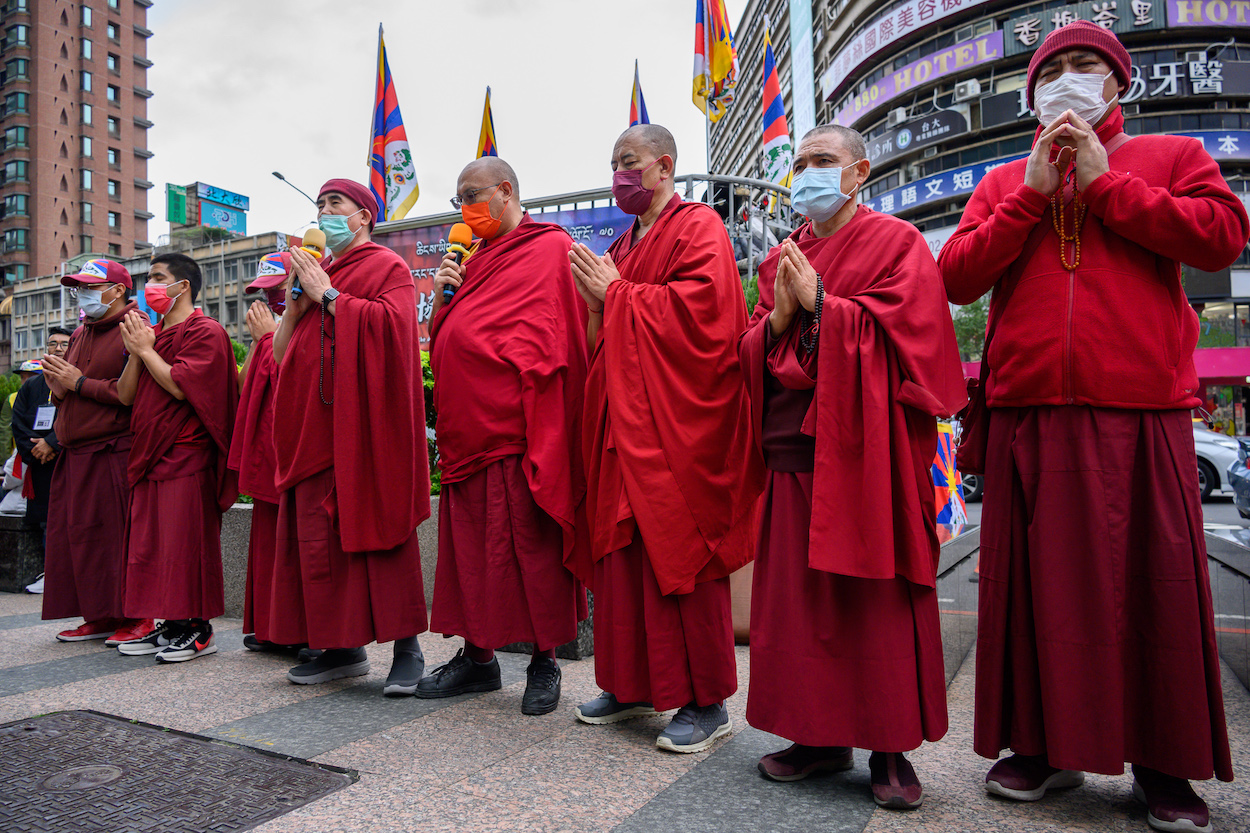 The pan-Green camp has historically been sensitive to Tibet-related issues and, even if annual commemorations of Tibetan Uprising Day in Taiwan tend to be relatively small, they draw high-profile politicians and can sometimes be an occasion for politicians to announce new policy initiatives. In past years, independent legislator Freddy Lim announced a campaign for the Dalai Lama to visit Taiwan. Although travel at present is limited due to the effects of COVID-19, the issue of a possible visit to Taiwan by the Dalai Lama continues to be a sensitive one.

Representing the DPP was former Sunflower Movement student leader and current DPP secretary-general Lin Fei-fan. Lin stated that Tibetan Uprising Day is commemorated in Taiwan as a sign of resistance against Chinese authoritarianism, whether with regards to Taiwan, Tibet, Xinjiang, and Hong Kong. Lin was particularly emphatic on the point of Hong Kong resistance, having tried to push for greater measures by the Tsai administration to assist Hongkongers in the past. 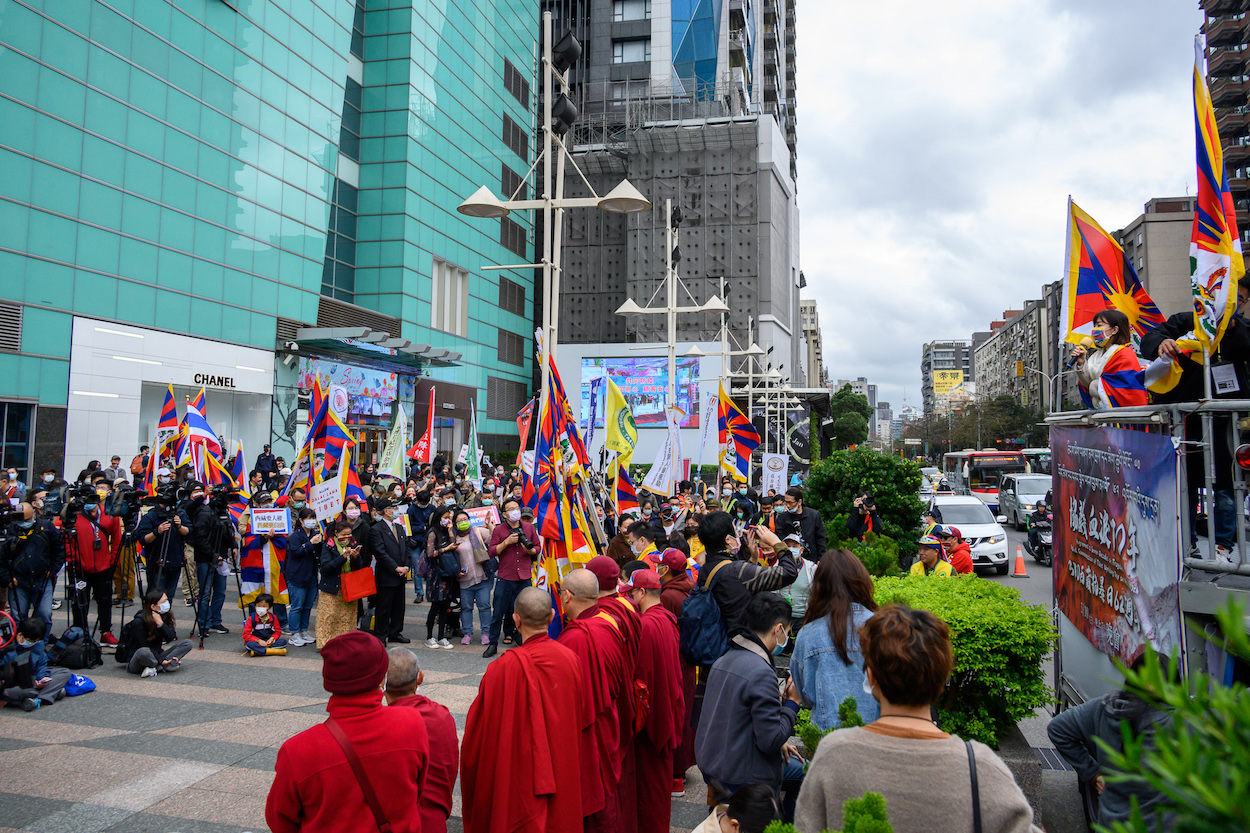 In her comments, Miao Poya of the SDP emphasized the Dalai Lama’s commitment to democracy, when as a religious and political leader, he could have easily chosen to be a dictator. The CCP has often tried to frame the Dalai Lama as a theocrat who ruled over Tibet in an autocratic manner and, in this way, depicted its occupation of Tibet as liberatory for the Tibetan people. However, self-immolations in Tibet continue and political freedoms for Tibetans remain curtailed by CCP rule.

At the prayer ceremony at Liberty Plaza earlier tonight, the proceedings began with a prayer for world peace and the singing of the Tibetan national anthem. Candles were set up to spell out “Free Tibet” and to form a peace sign in front of a portrait of the Dalai Lama. 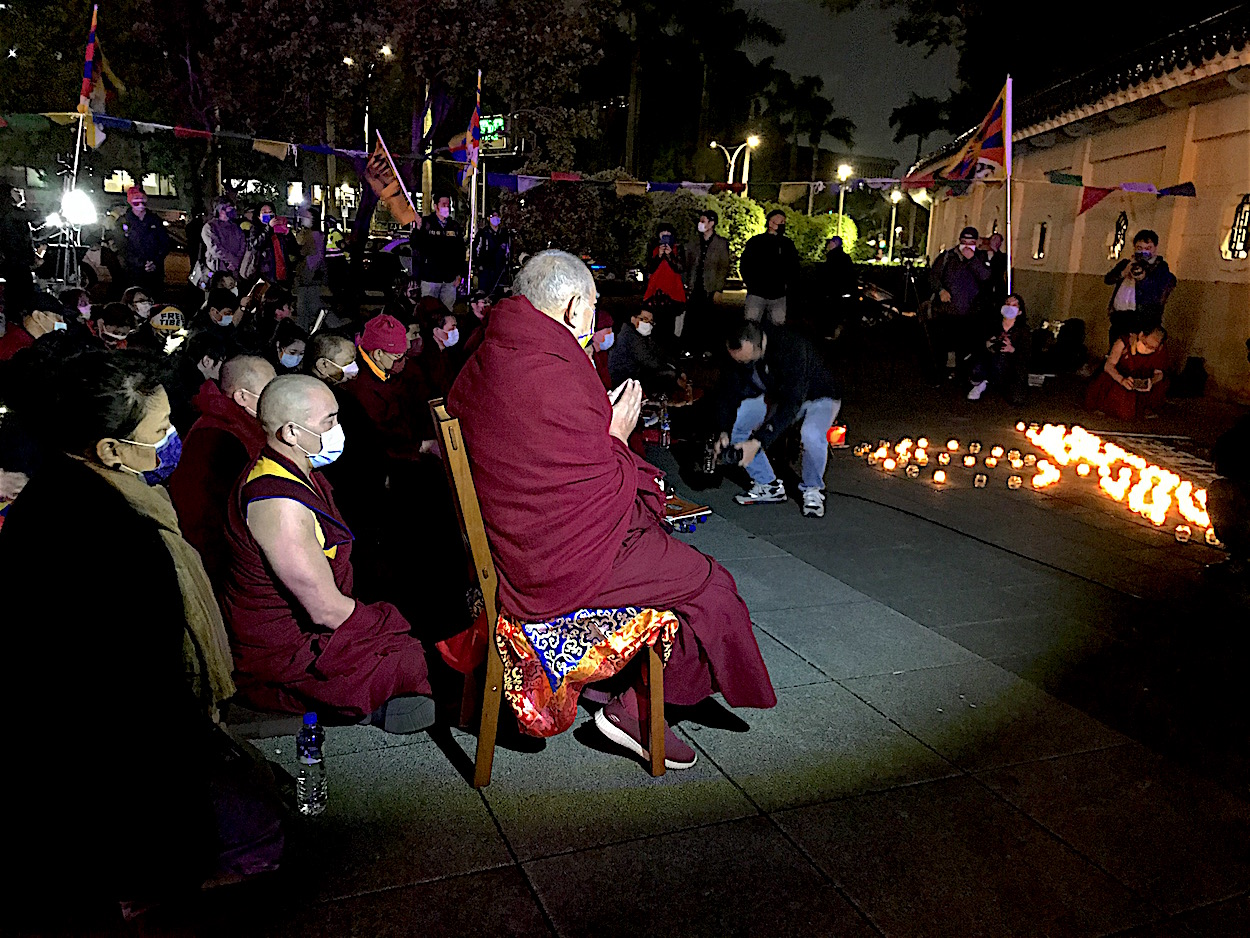 Speakers once again included a number of pan-Green politicians, including Handy Chiu of the NPP, Miao Poya of the SDP, and Fan Yun of the DPP, the latter of which did not appear at the rally until it was about to end, commenting on solidarity between Taiwan and Tibet. Tibetan speakers reflected on those that had died during Tibetan Uprising Day, the destruction of Lhasa during the Chinese occupation, and the inability of Tibetans in exile to return home.

In comments, Lin Hsinyi of the Human Rights Network for Tibet and Taiwan remarked on the increased repression of Tibetans during the 2008 Beijing Olympics and reflected that Tibetans could once again see a wave of repression, with the Olympics scheduled to take place in China in 2022. According to organizers, the schedule for the ceremony was changed after legislators and city councilors wished to attend. Several speakers also brought up that Tibetan elections for the Tibetan government-in-exile are scheduled to take place this year, expressing hopes that elections will go smoothly. 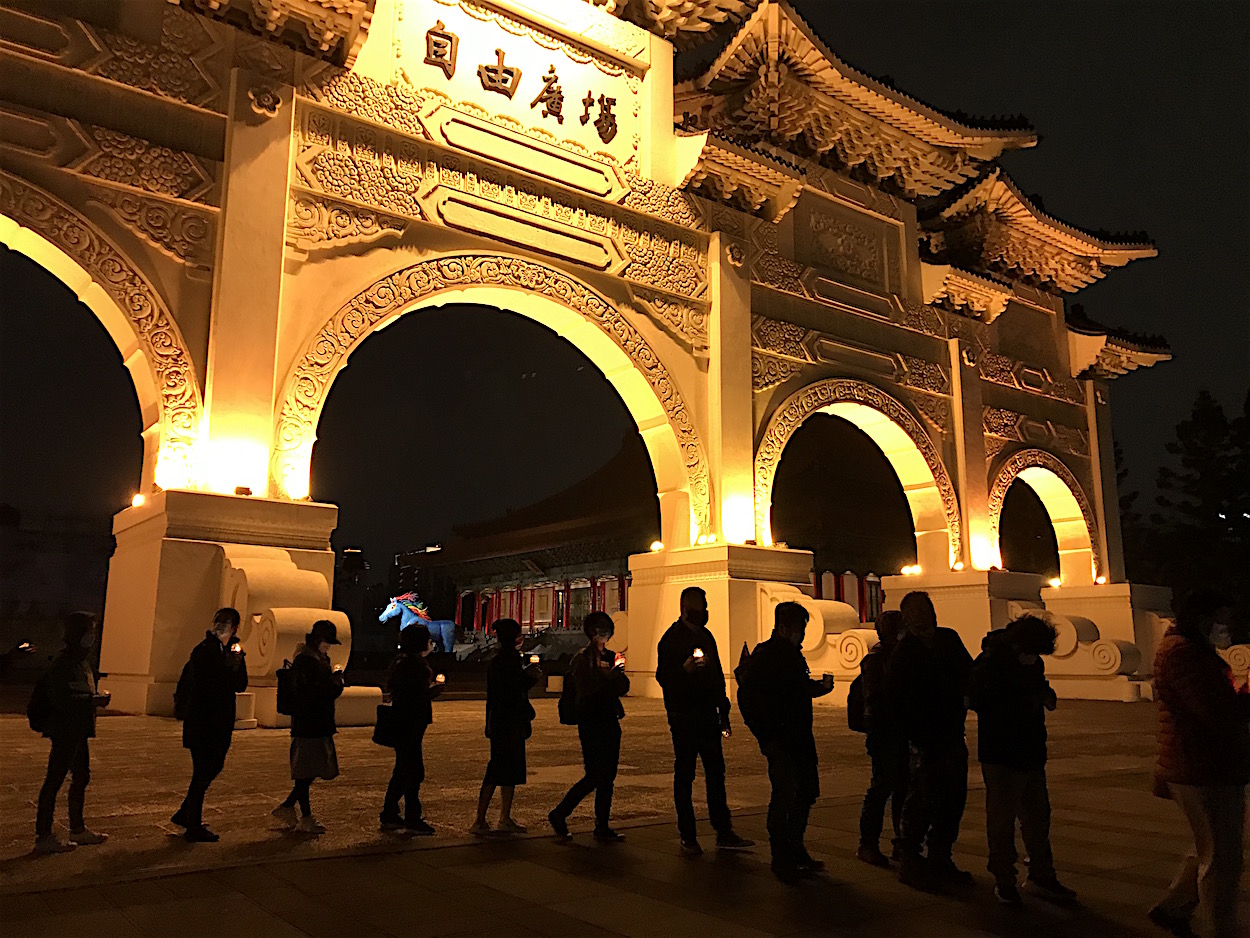 At the close of the ceremony, participants each took a candle and walked to the center of Liberty Plaza, where a song from the 1959 Tibetan uprising was sung.