THE FISHERY SECTOR has played a special role in the history and economy of Taiwan. Among the earliest cross-strait settlers on Taiwan were fishermen from the southern coastal provinces of China around the sixteenth century. Taiwan’s offshore islands of Penghu and Matsu are traditional seafaring societies, with temples dedicated to Matsu, the Daoist goddess of the sea, dotting the landscape.

In recent years, Taiwan’s fishing vessels have featured largely in the government’s diplomatic activities when piracy incidents involving Taiwanese ships and crew became frontline news. However, these events deal with Taiwanese fishing vessels as objects caught in international events. Rarely do the conditions on board these fishing vessels themselves become the focus of a serious national and collective examination. 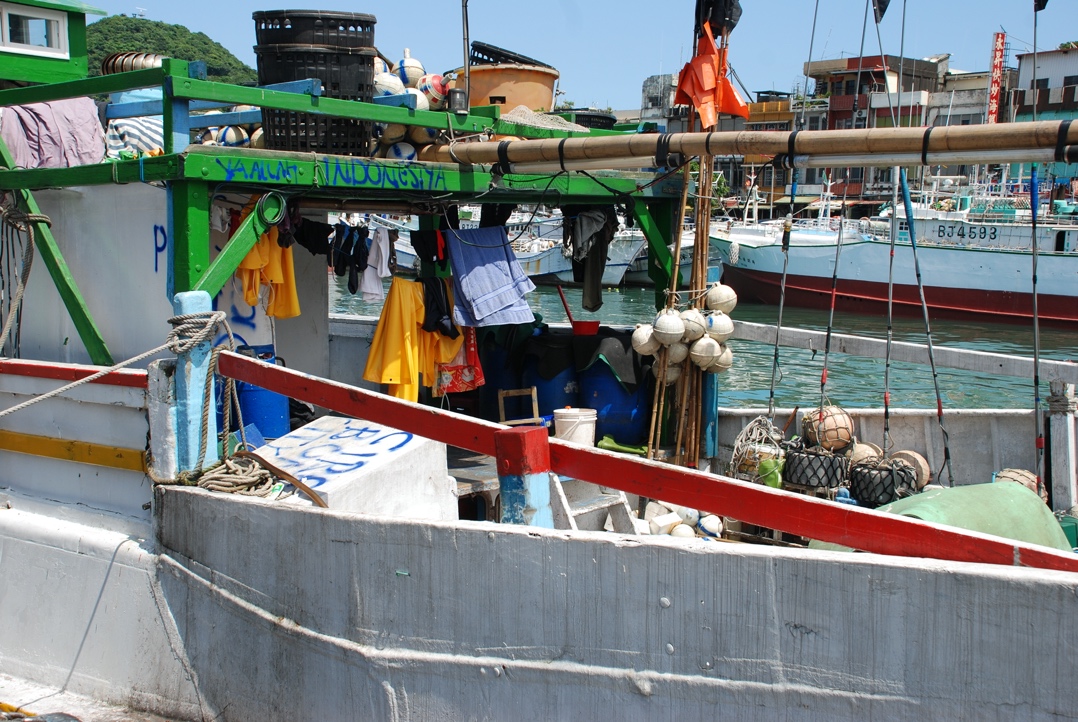 This is rapidly changing. Efforts by the European Union, specifically under its illegal, unreported and unregulated fishing (IUU) regulations in 2015, have brought a sharp focus on the employment conditions on Taiwanese fishing vessels and the climate of illegality that enables unsustainable fishing and labor abuses. This has shone a harsh light on the labor exploitation of migrants working on fishing vessels with a connection to Taiwan. Similar to incidents of slavery at sea involving migrant fishers in Thailand’s seafood industry that were widely reported between 2014 and 2015, migrant fishers on Taiwanese vessels also face exploitative conditions and abuses.

Migrant fishermen, coming mainly from Indonesia and the Philippines to work on Taiwanese vessels, are often subjected to labor exploitation so egregious that they are categorized as victims of forced labor and human trafficking. The 2016 Greenpeace report, “Made in Taiwan: Government Failure and Illegal, Abusive and Criminal Fisheries,” quotes an Indonesia fisher describing his employment experiences as the following:

“Whenever we work at the sea, we usually work 22 hours a day. I didn’t receive my salary for four months. Also, although I signed a contract for 300 USD per month, and got the first three months’ salary, I only received 100 USD each month for the first three months, because the agent charged me for the passport and insurance guarantee. My kid back home was sick, and my wife didn’t have a job. The money I sent was used to pay back what we owe to our neighbours. I am in a very bad condition now.”

Others report a lack of sleep, long working hours, withholding and arbitrary deduction of wages, beatings, and threats of violence, and even killing. The atmosphere is often coercive, where many fishers feel that there is no other option but to submit to their fate on board (我們沒有別的選擇). Between 2018 and 2019, the international NGO Environmental Justice Foundation conducted interviews with 71 Indonesian fishers who had worked on 62 Taiwanese vessels. The interviewees reported having experienced violent physical abuse from nearly a quarter of the vessels. One Indonesian fisher spoke of how the ship captain locked him in a freezer while he was still wet from a shower and how he feared dying inside the freezer and leaving his family with no support.

While forced labor on Thai fishing vessels received widespread global condemnation and resulted in reforms in the country’s seafood industry, labor abuses on Taiwan’s fishing fleet have not yet spurred on a similar level of national examination and action. Reports of violence and forced labor at sea aboard Taiwanese ships are not seen as symptoms of weak oversight and enforcement of regulations, perpetuated by low political will to reform Taiwan’s fishery sector.

Taiwan has the world’s second-largest distant water fishing fleets, which stay at sea for prolonged periods to catch high-valued seafood commodities, such as tuna, in the Pacific, Indian and Atlantic Oceans. Together, China and Taiwan account for 60 percent of global distant-water fishing activity. Taiwan’s distant water fishing fleet is well over a thousand vessels, with at least another 220 vessels that have business ties to Taiwanese investors but are registered under the flag of another state, a practice known as flag of convenience that makes the vessels harder to trace back to Taiwan.

Nevertheless, the harsh labor conditions faced by the migrant fishers in Taiwan’s distant water fishing fleet are gaining more and more notoriety. This led, in September 2020, to the US Department of Labor listing Taiwan-caught fish in its List of Goods Produced by Child Labor or Forced Labor. Known as US Department of Labor’s “Dirty List,” this official labeling by the US government not only has financial repercussions, as American companies shun Taiwan-caught fish and source elsewhere, it is also an embarrassment for Taiwan to share the list with China over its use of child and forced labor in the harvesting of cotton in Xinjiang.

Instead of being on the reactive back foot, Taiwanese businesses and authorities should view the international spotlight on migrant labor exploitation aboard its fishing vessels as an incentive to engage in current international standard-setting activities on business and human rights. However, until now, the government has treated migrant labor exploitation in the fishery sector largely as isolated incidents and not as a systematic fault line that can undermine Taiwan’s projection of itself as a nation based on a human rights ethos.

The forced labor of migrant fishers on vessels with connection to Taiwan is no longer an issue that disappears because the ships are out at sea, floating hells bubbling on water and out of sight. What the US Department of Labor listing of Taiwan on its list of goods produced by child and forced labor has demonstrated is that the challenge is already upon Taiwan. 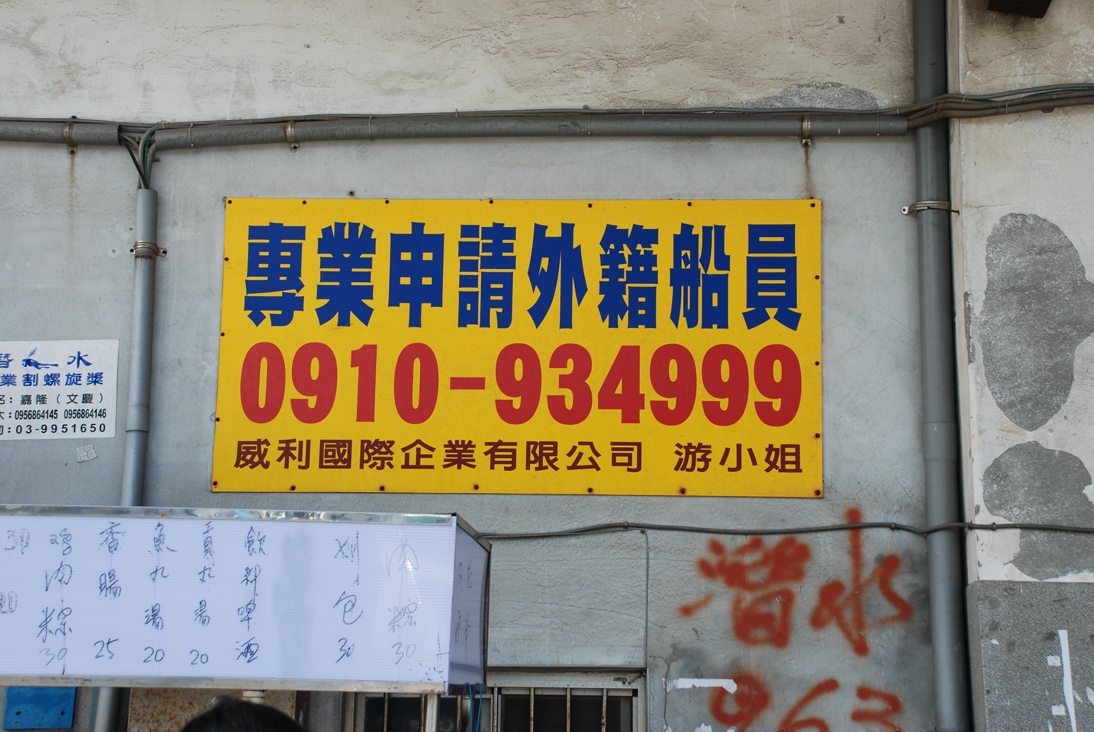 This is not the time to wait for the world’s attention to turn away. That simply will not happen. Instead, as a first step, Taiwan should explore meaningful ways that migrant recruitment can be done responsibly, so that migrant workers do not begin their employment in Taiwan or on Taiwanese fishing vessels burdened by heavy recruitment debt. On January 1st, 2021, a new regulation from the Indonesian government will take effect to ensure that Indonesian migrants leaving for work abroad will not be saddled with recruitment fees. Importantly, this new regulation covers Indonesian nationals working on migratory fishing vessels, as well as in domestic care.