TAIWAN REPORTED its first case of the local transmission of COVID-19 since April today, ending a streak of 253 days without domestic transmission of COVID-19 in Taiwan. This took place after a pilot from New Zealand not only tested positive for COVID-19 and was found to have spread COVID-19 to other pilots he came in contact with, but also spread COVID-19 other individuals in Taiwan that he came in contact with after his quarantine period.

The man in question was not required to undergo the full fourteen-day quarantine period before being allowed to travel around Taiwan, with pilots currently only required to have a three-day quarantine period, and flight attendants only required to have a five-day quarantine period. The Central Epidemic Command Center (CECC) that coordinates Taiwan’s response to COVID-19 is in the process of tracking the man’s contacts in Taiwan, and individuals that were present at places he visited after leaving quarantine have been asked to monitor their health. It is possible that the man, who is Taiwan’s 765th confirmed case of COVID-19, will be fined for not completely revealing his travel information and contacts around Taiwan, and reportedly refusing to admit to displaying symptoms of COVID-19. 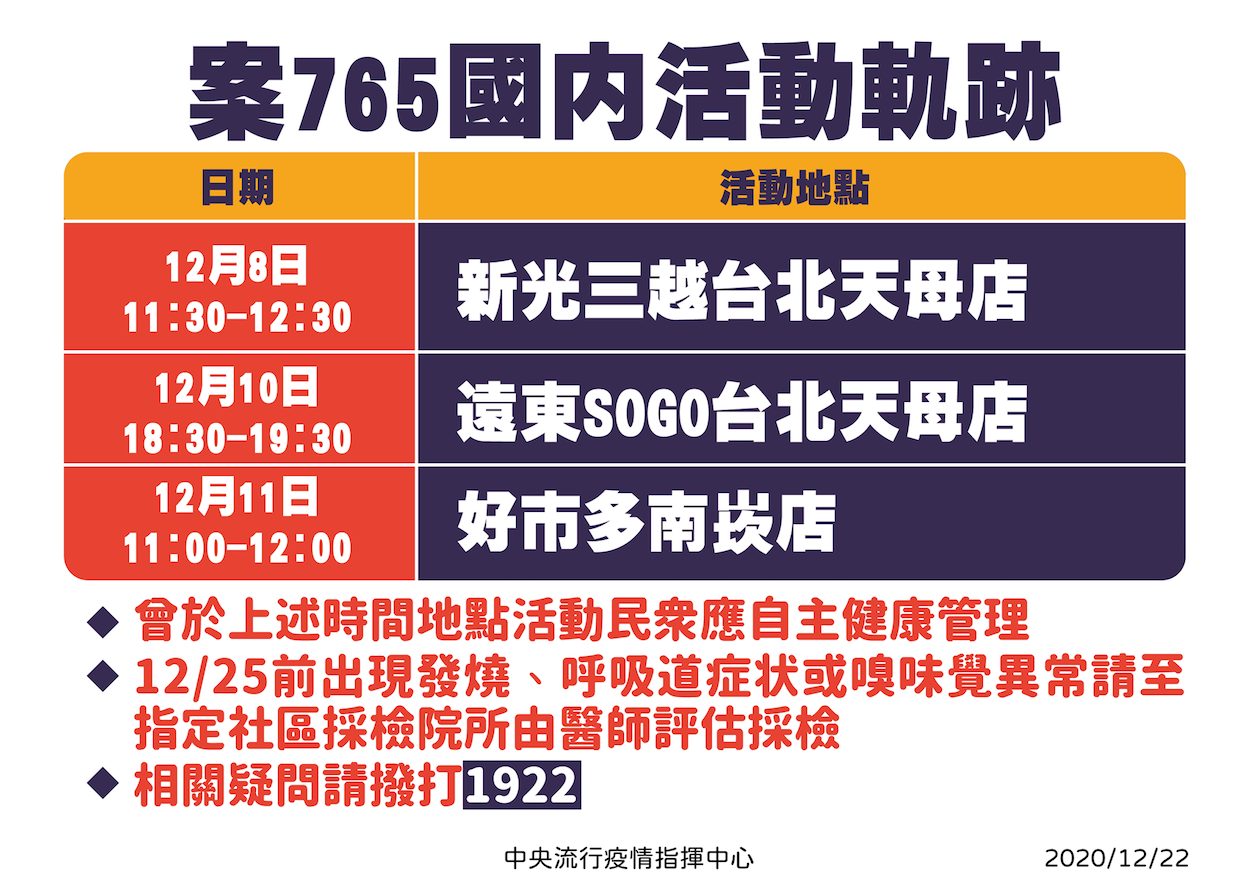 Infographic released by the CECC regarding the New Zealand pilot’s travel history. Photo credit: Ministry of Health and Welfare/Facebook

The outbreak of what has been described as a new, more virulent strain of COVID-19 in the UK has also prompted concerns. While the CECC has not announced restrictions on travel from the UK, with many European Union countries having shut their borders to the UK, it is to be seen whether the Taiwanese government will take similar measures.

Because of Taiwan’s successes fighting off COVID-19, Taiwan has never had to resort to lockdowns, something that has led to the cancellation of musical and performance events across the world. This has increased the incentive for musicians and performers unable to perform elsewhere to visit Taiwan, though they are often required to undergo fourteen-day quarantines and only are allowed to travel to Taiwan with negative COVID-19 tests within three days of their departure date.

Among those to travel to Taiwan have included renowned cellist Yo-yo Ma, four DJs that visited Taiwan in order to perform at the Ultra Taiwan electronic music festival, and composer Brett Dean, who traveled to Taiwan to perform with the National Symphony Orchestra. This has not been without controversy after the four Ultra Taiwan DJs broke quarantine to practice and to record a promotional video, and after Dean was found to be positive for COVID-19.

The Moscow Classical Ballet was originally scheduled to perform from December 16 to December 20 at the National Theater Hall in Taipei and December 25 to December 27 at the National Kaohsiung Center of the Arts. After the cancellation of their performances, the CECC allowed the performers to leave Taiwan ahead of schedule.

It is probable that the incident will lead to a new round of calls for mass testing to take place for returnees from abroad. The CECC has downplayed the possibility of infections resulting from members of the Moscow Classical Ballet coming into contact with others once out of quarantine, seeing as contact with others was primarily confined to convenience store interactions. 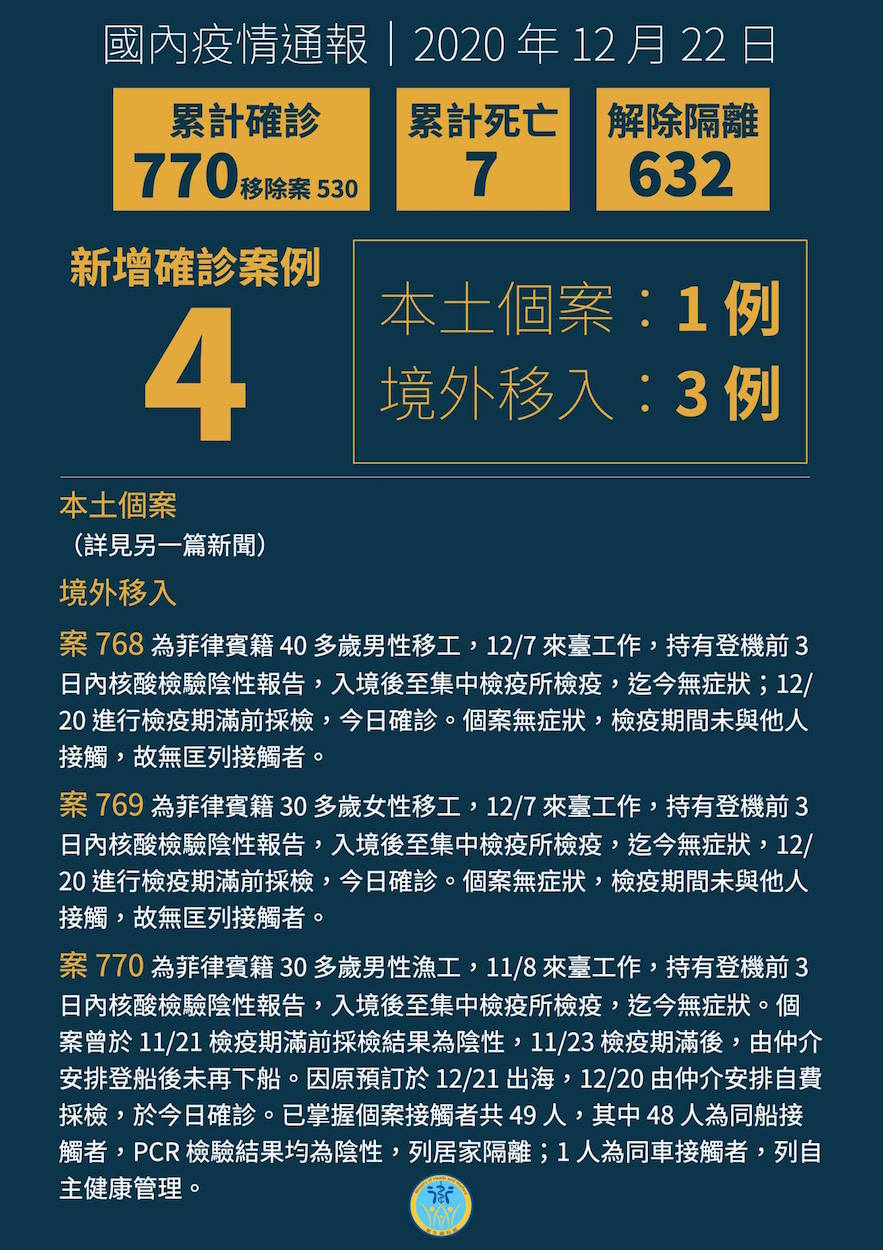 Infographic on the four new cases of COVID-19 reported today, including the first case of domestic transmission since April. Photo credit: Ministry of Health and Welfare/Facebook

The CECC has argued against mass testing in the past, citing that individuals that test positive for COVID-19 as a result of false positives would be in sufficiently high numbers that this would overwhelm Taiwan’s medical system. However, before today, accusations against the CECC of trying to hide undetected COVID-19 transmission strains to maintain Taiwan’s prestige as having not had a case of domestic transmission of COVID-19 since April were visibly on the rise.

This has occurred over the past week, with the Taiwanese media reporting on a study originally published in The Lancet in October that claimed Taiwan to have a higher infection rate of COVID-19 than reported by the CECC in July, the study citing a possible number of 11,800 cases. Such accusations also occurred previously with an earlier antibody study carried out in August in Changhua that its organizers seemed to hope would prove the CECC wrong, though the results of the Changhua antibody study showed that infection rates in Taiwan were low, and backed up the CECC’s stance that there was no need for mass testing.

Though this has not been emphasized by Taiwanese media—hardly known for its robust fact-checking practices—the findings of The Lancet study were also that existing measures to prevent the spread of COVID-19 were sufficient. Despite the unusually high possible number for infected cases that The Lancet study came up with, it is highly unlikely that 11,800 undetected cases in July would still not have been detected or had visible effects close to half a year later. Likewise, individuals that visit a hospital during a pandemic hardly prove a representative sample of the population as a whole. In English-language media, one has seen the usual suspects report on the findings of the study as credible, as well.

One generally expects the narrative of the CECC covering up COVID-19 cases to grow, as amplified by pan-Blue political forces who are interested in finding means to attack the Tsai administration and clickbait Taiwanese media with poor fact-checking practices. The pan-Blue camp has been leaning heavily into disinformation on a number of issues as of late, such as regarding imports of ractopamine-treated pork from the US, and it is possible that they may engage in the use of disinformation regarding COVID-19 to use it as a wedge issue against the DPP as well. While the CECC again strengthened COVID-19 prevention measures earlier this month, calling for mask-wearing to resume in public venues, the CECC will need to cope with maintaining its legitimacy as an authority on COVID-19 prevention measures going forward.

On the other hand, stiff fines against quarantine breakers would seem to be the CECC’s preferred tactic of dealing with quarantine breakers, as in the case of two Taiwanese that returned from Cambodia fined 100,000 NT for violating quarantine. That being said, the CECC recently saw scrutiny for light fines of 10,000 NT against the four DJs that broke quarantine after traveling to Taiwan for the Ultra Taiwan festival, while fining a Filipino migrant worker that broke quarantine for eight seconds 100,000 NT.

COVID-19 prevention measures to cope with the winter months are likely to continue to change, given the shifting situation globally. As COVID-19 vaccines become more available for use, one is likely also to see political contestation regarding the issue, such as regarding how Taiwan acquires COVID-19 vaccines, the quantity vaccines it acquires, and which vaccines it chooses.

An early sign of this would be regarding the CECC warning against individuals traveling to China to take Chinese-made vaccines. Pan-Blue critics are likely to accuse the Tsai administration of not wanting Chinese-made vaccines because of political considerations. One expects such debates to become increasingly intense as vaccines become more readily available.