Reflecting on Challenges of Taiwan’s Immigration Law: A Personal Story of Taiwanese and Tibetan Spouses

ON NOVEMBER 11TH 2020, a group of non-governmental organizations in Taiwan including the Human Right Network for Taiwan and Tibet (HRNTT/西藏台灣人權連線), Student for a Free Tibet (Taiwan), and the Association of Visual Arts in Taiwan (台灣藝術家博覽會) organized a talk that discussed challenges of Taiwanese immigration law. The talk was organized as part of the monthly Lhakar program organized by the HRNTT. The talk consisted of two main speakers, Tsai Yung-ching and Wang Xi. [1]

Tsai Yung-ching (蔡詠晴) was one of the main speakers, and she is a documentary filmmaker by profession.  Tsai shared her first-hand experience and elucidated on various issues and challenges of Taiwan’s immigration law, particularly regarding ambiguity about refugee issues. She had a considerable contribution in the government decision to grant Tibetan spouses in Taiwan residential rights. Tsai Yung-ching’s first encounter with the Tibet issue was in 2004 when she visited India to interview the Tibetan spiritual and political leader, His Holiness the Fourteen Dalai Lama. She stated that before the interview she only had a general idea about the Tibet issue, the Tibetan people, and her experience and knowledge about Tibet was limited to the Dalai Lama. It was the first time that she learned about the Tibetan exile community in Dharamsala, in northern India.

She continued and mentioned that regardless of our skin color, nationality, gender, and economic status, we share common emotions of love and compassion towards each other. While waiting in a queue to visit the Dalai Lama, Tsai met a group of Tibetans who recently came from Tibet to see the Dalai Lama and seek his blessing. For Tibetans, the Dalai Lama is not only a spiritual and political leader but someone who led them during the worst period of Tibet history. For Tibetans, the Dalai Lama represents their pride, dignity, and Tibet as a nation.  Emotionally, she instantly connected with these Tibetan and wiped her tears along with those Tibetans as they received the glance of the Dalai Lama. The moment led to her long term commitment regarding Tibet issues and Tibetans in exile.  She made her second visit to India in 2005 to learn more about Tibetans in exile, and three years later, she made her first documentary about Tibetans in exile in India titled “Way Home”. She later released her second documentary about exile Tibetans titled “Boy Tashi”. 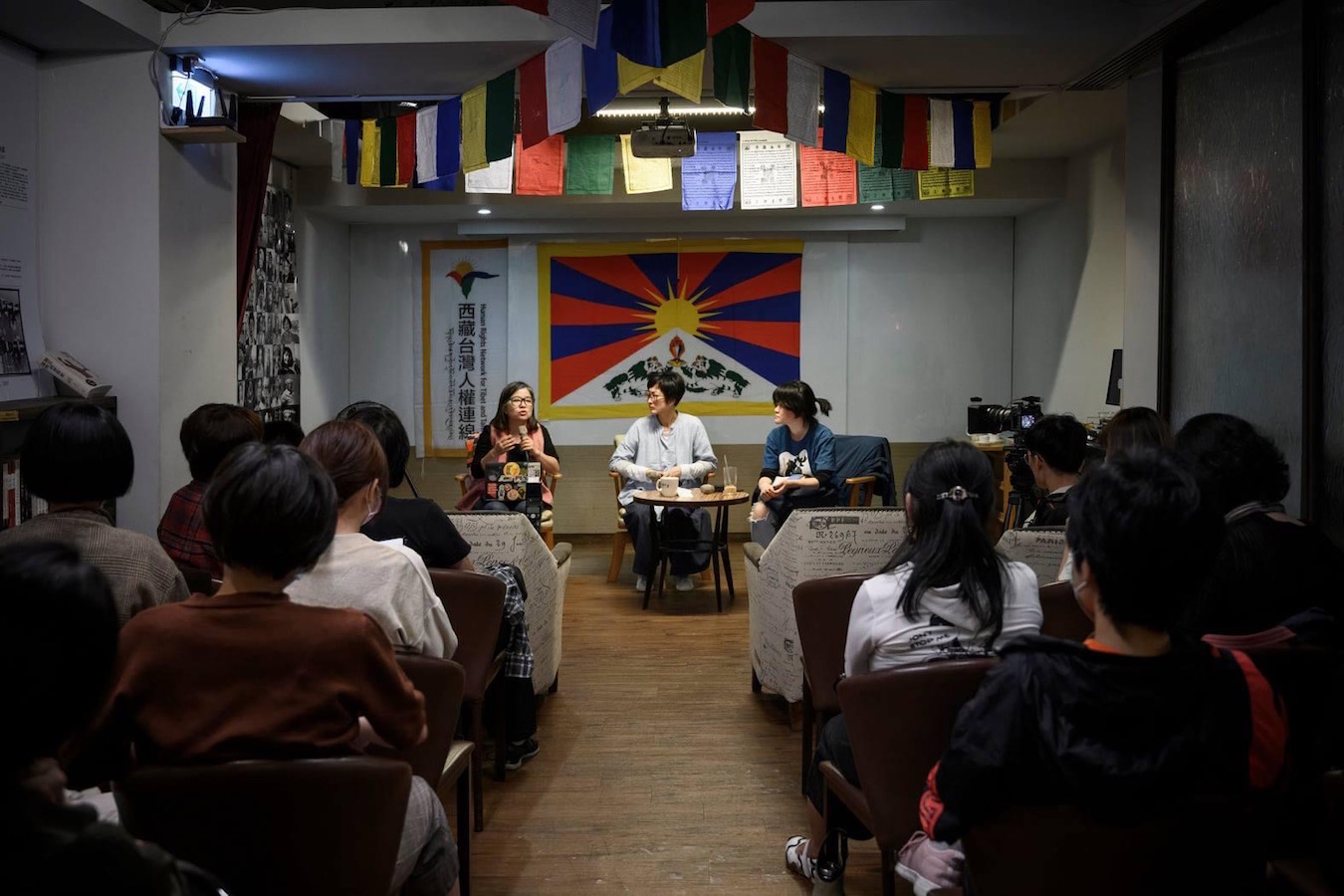 Tsai Yung-Ching met her Tibetan husband Lhundup Tsering during her second visit to India for the documentary project and the two were married in 2008.  Lhundup Tsering escaped from Tibet to India due to China’s repressive policies. The government of India issued travel documents for Tibetan called an “Identity Certificate”, popularly known as the yellow book, that allows Tibetans in exile to travel outside India.  Not every country accepts the certificate as a legal document.

Taiwan originally did not until the Dalai Lama made his first visit to Taiwan in 1997.  Taiwan started accepting the yellow book afterward. As a result, in 2011 Lhundrup traveled to Taiwan with Tsai Yung-ching.  Both of them planned to settle in Taiwan, but this was not possible because Taiwan does not have laws welcoming of refugees and stateless individuals.

Taiwan took a careful decision in accepting the yellow book. Tibetans can travel to Taiwan with the Yellow book but only with a tourist visa—or in other words, only for a short duration. Except for the official members of the Tibet Religious Foundation of the Dalai Lama, Tibetan visitors in Taiwan are not eligible for a residence permit (Alien Residence Certificate) that is the essential requirement to access health insurance or employment right, including individuals that travel to Taiwan for study.

For Tsai and her Tibetan husband, without a doubt this denial of the right to residence was a big challenge, but what was a great disappointment were the discriminatory characteristics of Taiwan immigration law. The immigration law of Taiwan, on the one hand, denied the right to residence for her husband, a stateless nationality but, on the other hand, spouses from developed countries as the United States, Europe and Japan obtain residence permits without much difficulty. In 2011, Tsai launched a protest against the government for the discriminatory law and demanded the right to residence for her husband. Initially, she failed to receive a response from the government.

However, due to reactions to Tsai’s advocacy in 2012, the Taiwan-Tibet Family Human Rights Alliance was established and began to petition government agencies and public opinion representatives.  Their demand was very simple: They do not require special treatment, but equal treatment under the law. As a result of the mass petition and campaign, a government agency reached her and offered assistance. A government agent approached her, indicating he could help if the protests were just for her husband’s residence permit. Tsai, on the other hand, refused the offer; she demanded a law that offers give equal treatment for individuals of all nationalities, especially Tibetan or other such stateless nationalities who wish to marry a Taiwanese citizen. She demanded a law that guarantees equal treatment and the right to a residence, a fundamental human right for stateless nationalities that is absent in Taiwanese law and remains a major loophole of Taiwan’s immigration law.

She and her husband went through a marriage interview at the Taipei Economic and Culture Center (TECC) twice and were asked for a variety of documents at each time they visited the TECC. After a six-year legal battle against the discriminatory law, the government in 2015 formulated a new law that provides residence permits for exiled Tibetan married to a Taiwanese spouse with conditions. Although there are limitations within the law, the new law at least provides the right to residence for stateless spouses says Tsai.

Wang Xi (王曦), head of the law department at Taiwan Association for Human Rights was another speaker. She highlighted another major loophole within Taiwan cross -border marriage and immigration law. Wang Xi mentioned that Taiwan has a discriminatory immigration law that provides special privileges to nationalities belong to developed countries. Taiwan immigration law specifies spouses from 21 countries, mostly South Asia and Southeast Asian countries. [2] In addition to the required documents, individuals from those countries must pass a marriage interview at the Taipei Economic and Culture Centre. But outside of these 21 countries, spouses from developed countries only need to bring supporting documents.  According to Wang, the government’s arguments for such an uncompromising law for developing countries was to prevent fake marriages and for national security. It is further argued that the crime rates in these countries are higher than in developed countries; therefore, the government claims it is necessary to implement such uncompromising regulations.

She further argued that Tsai’s case underscores Taiwan’s inability in dealing with the refugee issue and composes a comprehensive immigration law. In 2018, the Trans-Asia Sisters criticized the government policy against the 21 countries by calling it “One Country, Two Systems”. President Tsai Ing-wen launched the New Southbound Policy as part of her foreign policy agenda. The policy aims to strengthen Taiwan’s economic relationship with the Southeast Asian countries. Still, at the same time, the government continues to implement the same discriminatory policies against citizens from these countries.

This talk organized by the HRNTT was important not only because it discusses the challenges of Tibetan refugees in Taiwan, but also the challenges posed by Taiwan’s ambiguous immigration laws. Taiwan’s economic growth rate has reached a decent rate, with demographic change indicating growing demand for labor, both skilled and unskilled.  Furthermore, one of the critical objectives of the New Southbound Policy is to advance Taiwan’s economic integration with Southeast Asian countries, thereby reducing its economic dependency on China. Given such circumstances, it is pertinent for Taiwan to develop a comprehensive framework of immigration law.  Lin Hsin- Yi, the director of HRNTT maintains that a refugee law can not only play an important part in Taiwan’s New Southbound Policy but must offer a system to work dealing with refugees and immigrants issues in near future.

Taiwan can no longer remain dependent on short-term solutions for issues regarding stateless nationality, refugees, and asylum seekers.