MEASURES TO prevent the spread of COVID-19 will be strengthened today, with mask-wearing again mandated in eight forms of public venues including public transportation, educational facilities, government offices, entertainment establishments, places of worship, and other places.

The measures were mandated earlier in the month, with the Central Epidemic Command Center (CECC), which coordinates Taiwan’s COVID-19 response, anticipating an uptick in imported cases of COVID-19 from returnees from abroad. The COVID-19 pandemic began last year during the winter and some experts fear that the winter months could see a new wave of cases globally. 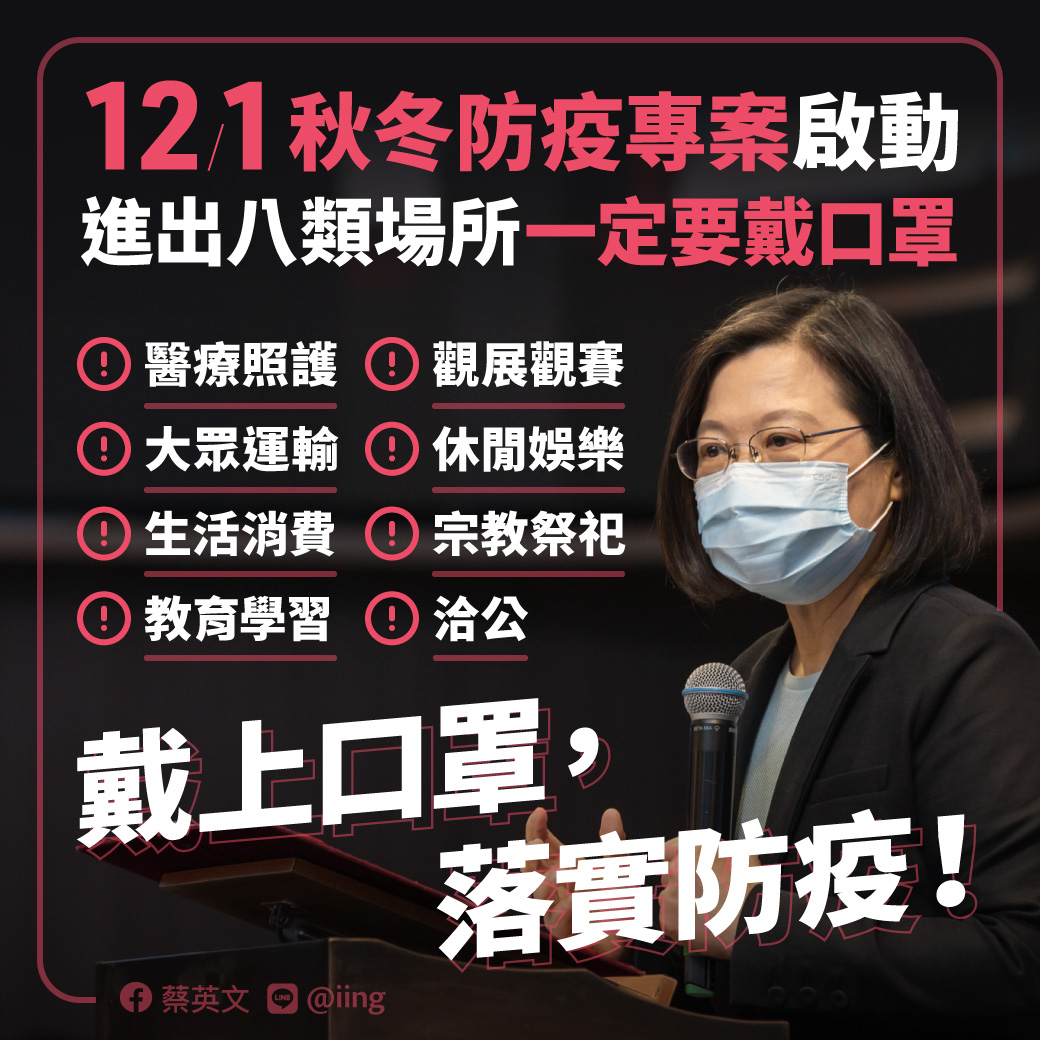 Taiwan’s last case of domestic COVID-19 transmission was in April. The CECC has to date maintained that its system of mandated fourteen-day quarantines for individuals that return or travel to Taiwan from abroad has proven sufficient in preventing the domestic spread of COVID-19.

Pan-Blue politicians previously seemed to try and intimate that the Tsai administration was covering up the undetected transmission of COVID-19 in August, calling for mass testing in order to detect these cases. However, the preliminary results of a study that they hoped would suggest the need for mass testing showed that the infection rate of COVID-19 in Taiwan was still low. The CECC maintained that mass testing would result in sufficient false positives, who would have to then be quarantined, that this would overwhelm Taiwan’s medical system, seeing as this would result in over 12,000 false positives.

The CECC, however, may be increasingly wary of the possibility of COVID-19 cases spreading through home quarantines. As such, new requirements specify that individuals traveling to Taiwan, whether they are Taiwanese citizens or otherwise, will need to have a negative COVID-19 test from within three days of their date of departure to be allowed into Taiwan. Individuals that fake their test results will be fined, as well as individuals that arrive without a negative test result unless this was already approved by authorities. This new testing requirement will also take effect starting today and is likely to continue until the end of February.

Indeed, it proves a challenge for the CECC to maintain public vigilance preventing the spread of COVID-19. While mask-wearing and temperature checks never truly went away in Taiwan, renewing mask-wearing measures for indoor facilities is likely meant to serve as a warning. It is also probable that some establishments that have done away with temperature checks, hand sanitizer, or name registration systems will reinstate these measures. But this time around, Taiwan is not likely to face shortages of needed medical masks or other medical supplies, given measures taken by the Tsai administration to increase production or acquisition capacity for such medical supplies over the last year.

In particular, concerns have been raised by an uptick in the number of imported COVID-19 cases as of late. Yesterday, the CECC announced 24 new imported cases of COVID-19, most of which came from the testing of 939 Indonesian migrant workers. 19 cases were asymptomatic, though it is not impossible that some cases were false positives. That being said, the CECC has announced a temporary two-week suspension of Indonesian migrant workers entering Taiwan and prohibited some workforce agencies from sending migrant workers to Taiwan, citing that testing measures may be insufficient at facilities for migrant workers from Indonesia traveling to Taiwan.

The government is likely to eventually relax this restriction based on capacity. At the same time, one can expect that the debate about whether or not there should be mass testing for COVID-19 in Taiwan to possibly be reignited by this result. 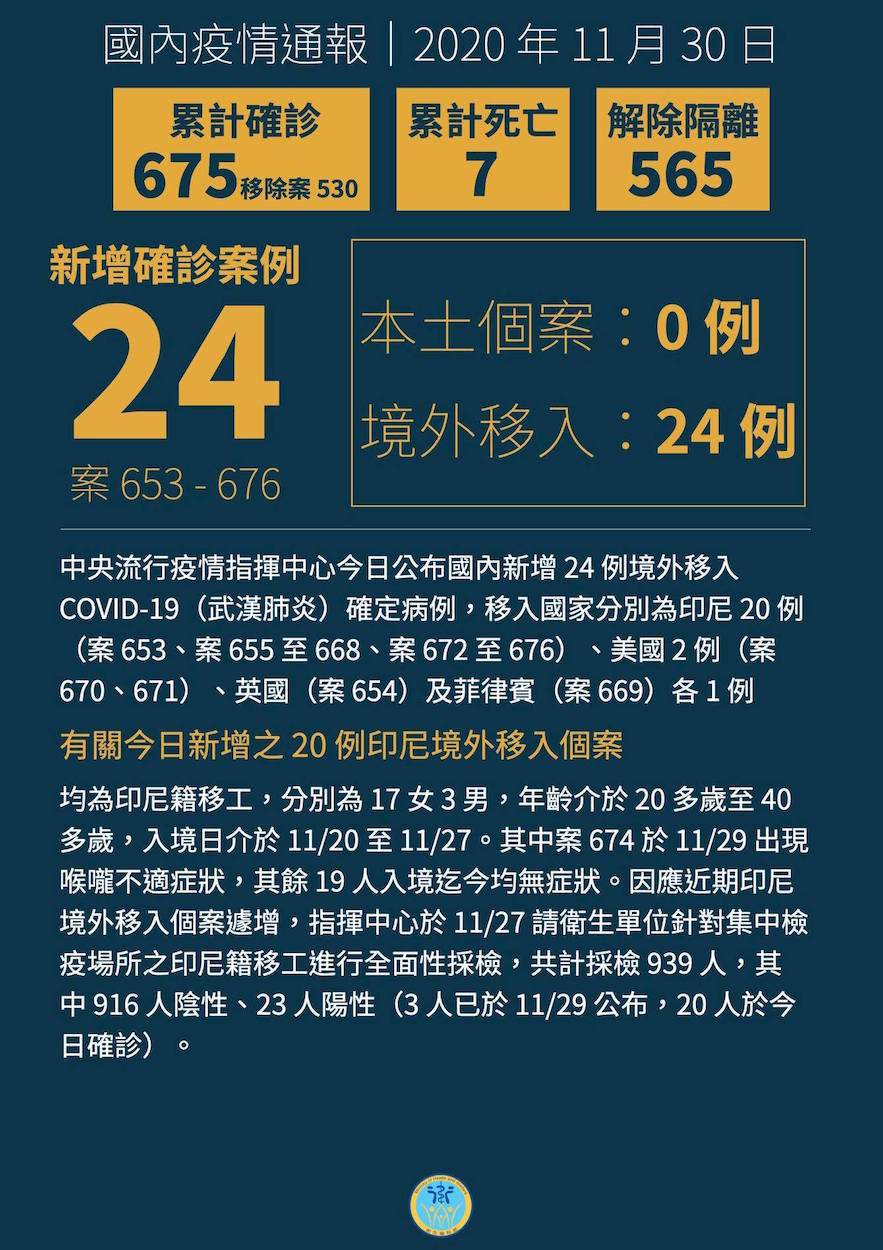 Infographic released by CECC on the uptick in recent cases. Photo credit: Ministry of Health and Welfare/Facebook

However, the mass testing issue is likely to again become a point of attack, with the pan-Blue camp possibly embracing conspiratorial claims of a cover-up in line with its other attacks on the Tsai administration. This includes claims that the Tsai administration has behaved in an authoritarian manner to put down dissent by not renewing the broadcasting license of CtiTV, or the party circulating disinformation about ractopamine-treated pork and beef imports from the US. It is possible that the KMT would do the same regarding Taiwan’s COVID-19 outlook.