A SOLIDARITY MARCH for Hong Kong took place in Taipei today, calling for the release of twelve Hongkongers currently imprisoned in China that unsuccessfully sought to flee to Taiwan in August. 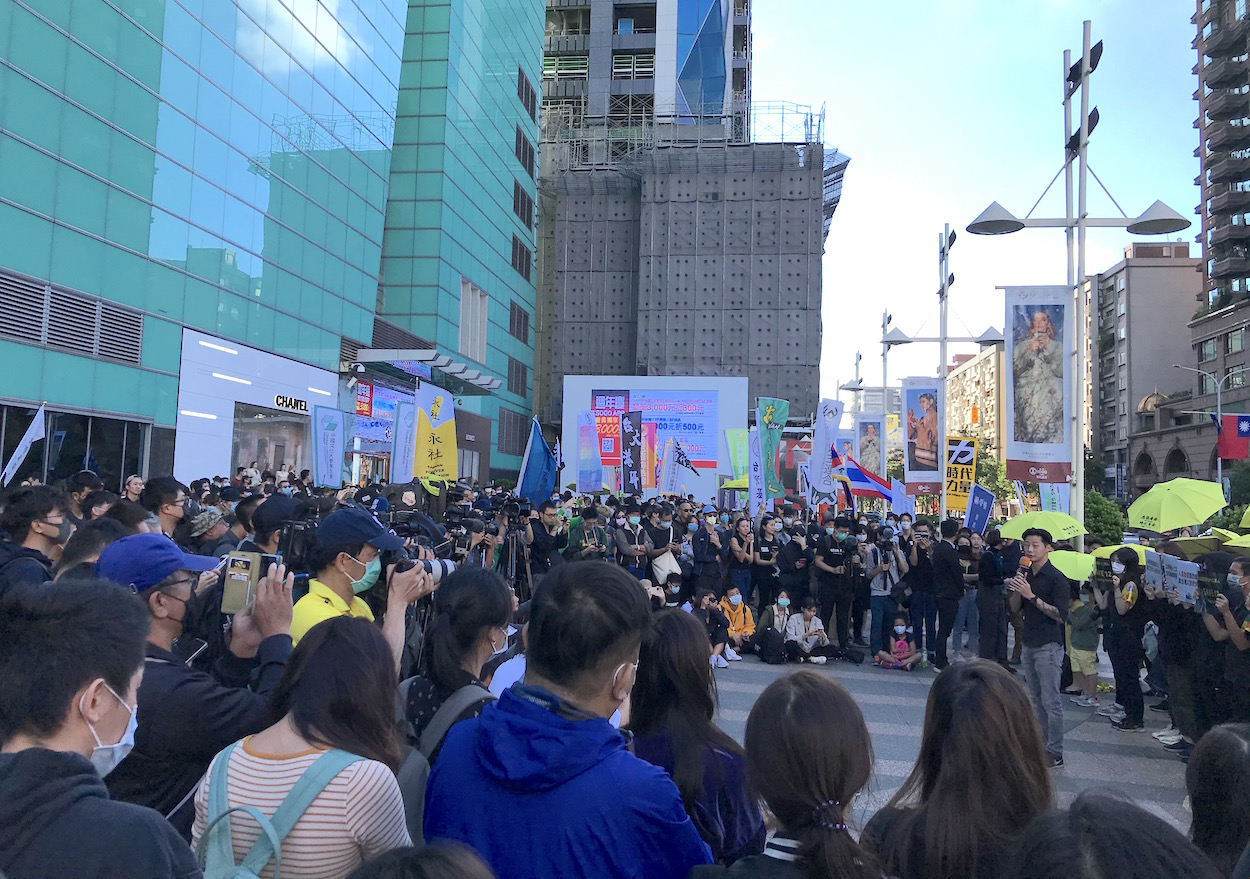 Speech by independent legislator Freddy Lim, the head of the Hong Kong caucus in the Legislative Yuan, at the start of the march. Photo credit: Brian Hioe

Organizers claimed that 3,000 were in attendance at the march, though a lower estimate might be closer to 1,000. The march took place as part of a global day of action in support of the twelve Hongkongers in 34 cities internationally, calling for their release. The protest took place the same as pan-Blue commemorations of Retrocession Day, marking when Taiwan came under control of the KMT after the end of the Japanese colonial period, proving a counterpoint to pan-Blue commemorations of what they see as Taiwan returning to Chinese rule and what is framed by the pan-Blue camp as Taiwan’s unbreakable historical link to China.

The rally today was one of the larger demonstrations in support of Hongkongers since last year. A commemoration in June for the one-year anniversary of the start of protests in Hong Kong last year drew what organizers claimed to be 7,000 individuals. Solidarity rallies for Hong Kong last year drew tens of thousands, with organizers claiming 100,000 in attendance in a solidarity rally last September, and a solidarity concert in November organized by Taiwanese indie bands drawing tens of thousands. 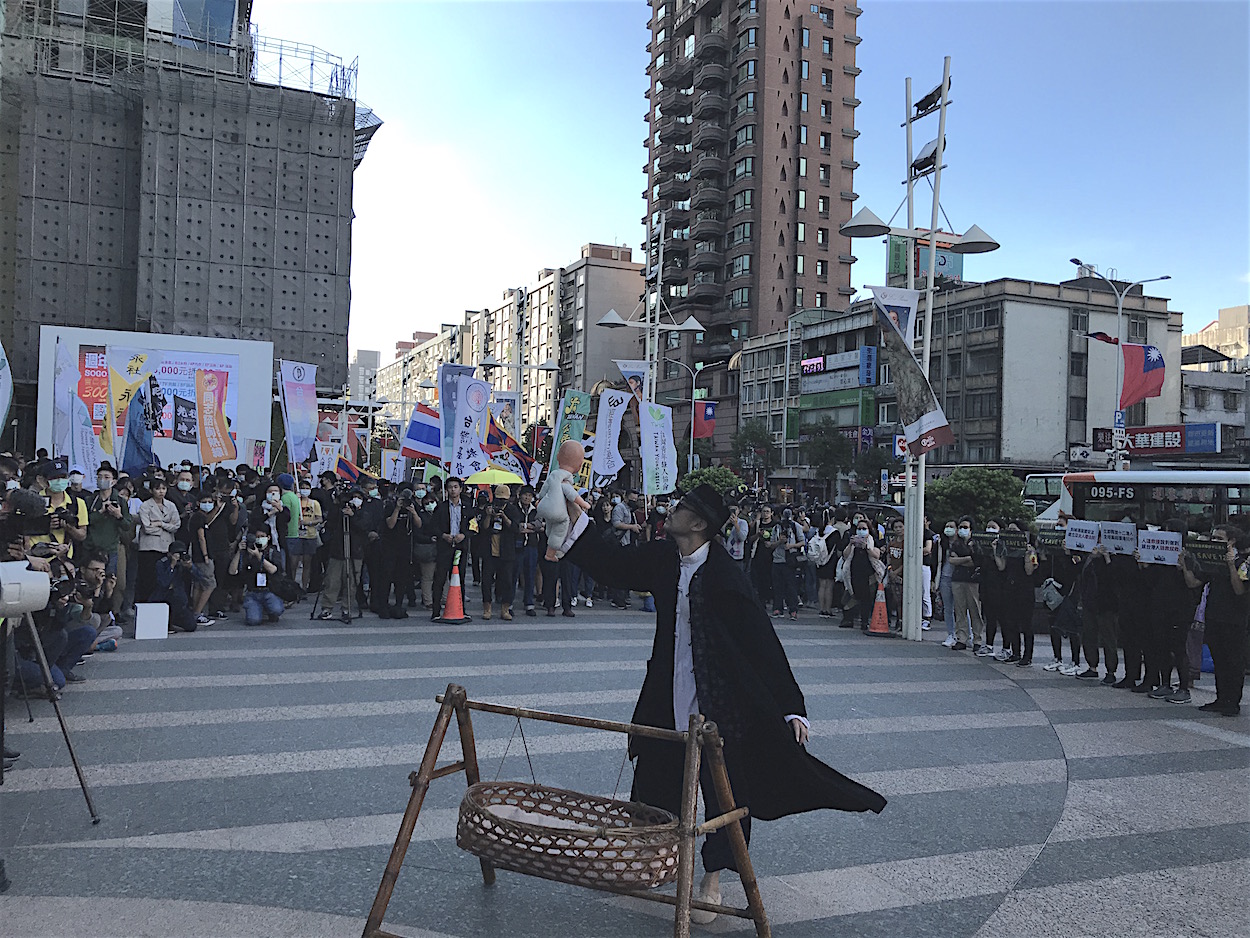 These previous solidarity rallies likely drew greater attendance, in part, because of what were then upcoming Taiwanese elections in January 2020. But compared to last year, today’s demonstration had a greater proportion of Hong Kong diaspora based in Taiwan than before. Many wore gas masks, hard hats, and black clothing, much as demonstrators in Hong Kong often do to avoid identification, and as protection from tear gas and police violence. 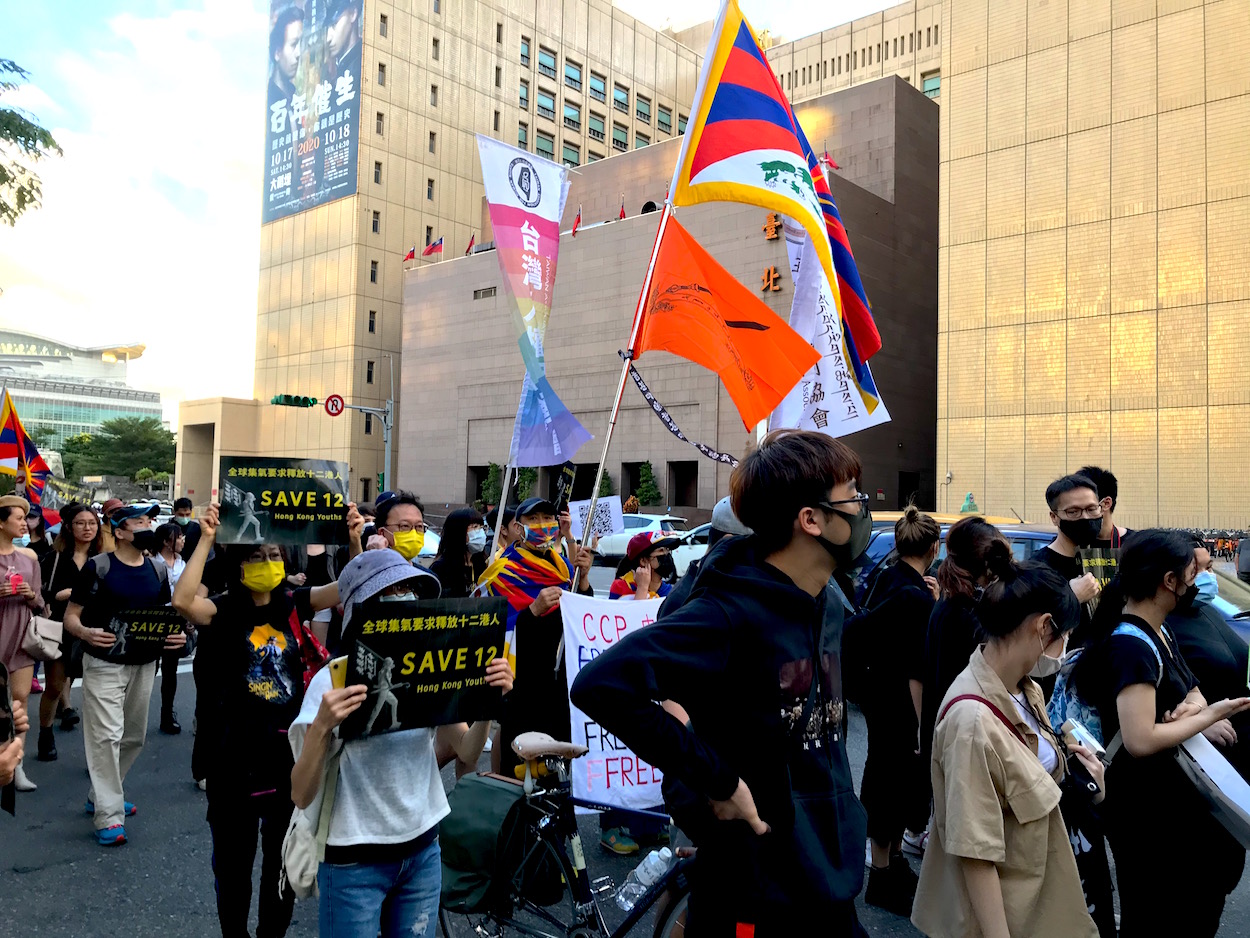 Around fifty civil society groups participated in the event organization, including organizations that had played a key role in the Sunflower Movement or were formed in the movement’s aftermath. The presence of overseas groups from Thailand, Malaysia, and Tibet also points toward the increasingly transnational nature of support for Hong Kong.

The march began at the SOGO Plaza in front of the Zhongxiao Fuxing MRT, where speeches and a performance by dancers from Tsai Jui-yueh Dance Research Institute took place. Large banners were unfurled with the names of each of the twelve imprisoned Hongkongers written on them. Demonstrators carried a series of large balloons and LED lights spelling out “SAVE 12” and signs with similar slogans were handed out among participants. 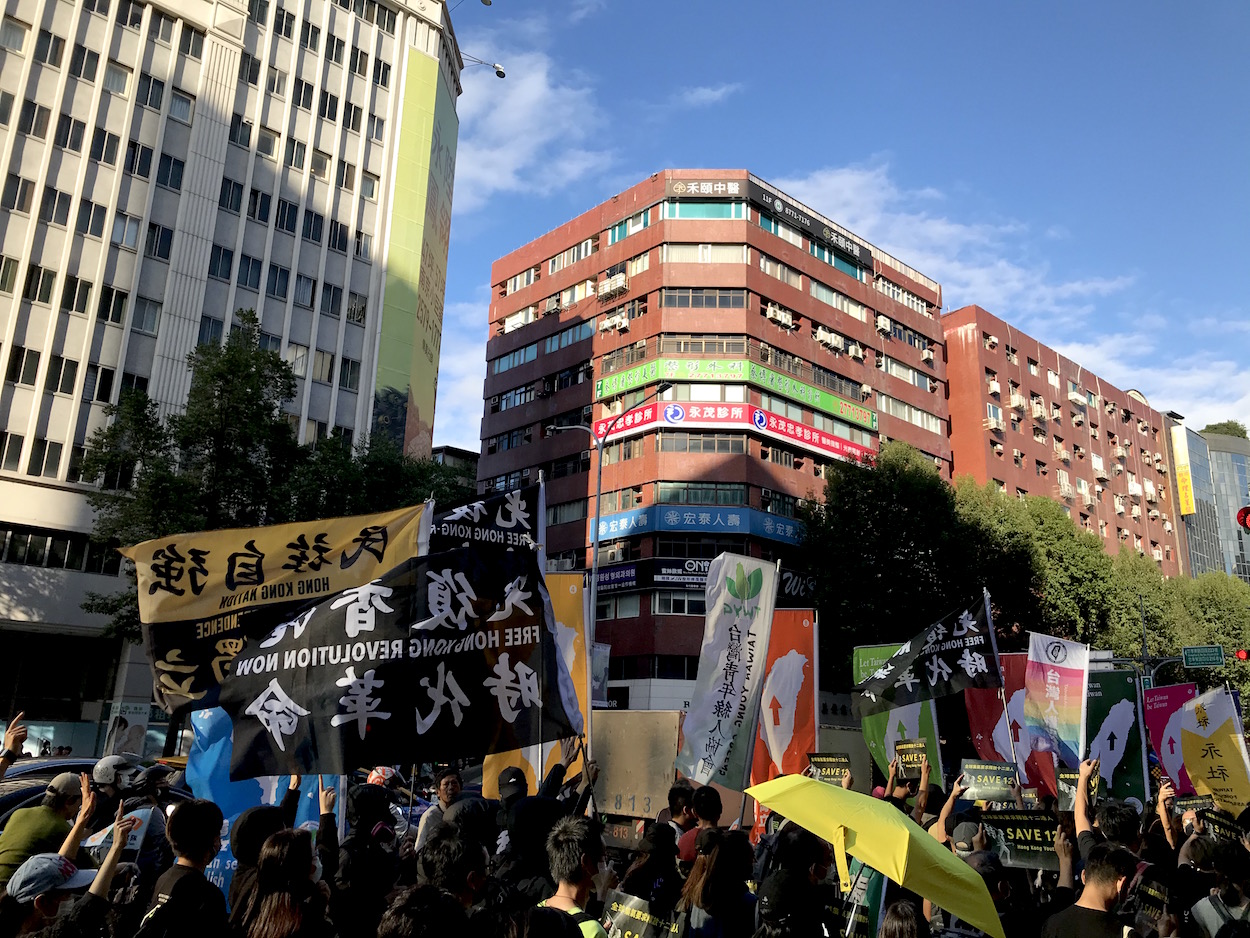 The march set out around a quarter past three PM and then proceeded to the Taipei Branch of the Bank of China. There, speakers highlighted the structure as a symbol of China. With Bank of China staff attempting to prevent demonstrators and media from entering the plaza in front of the building, speakers criticized this as infringing upon access to what should be public space.

Finally, the rally proceeded to the Hong Kong Economic, Trade and Cultural Office, a common destination of solidarity marches for Hong Kong over the last year, where more speeches from speakers took place. The rally ended with someone setting fire to the Chinese flag, although the fire was extinguished by police. 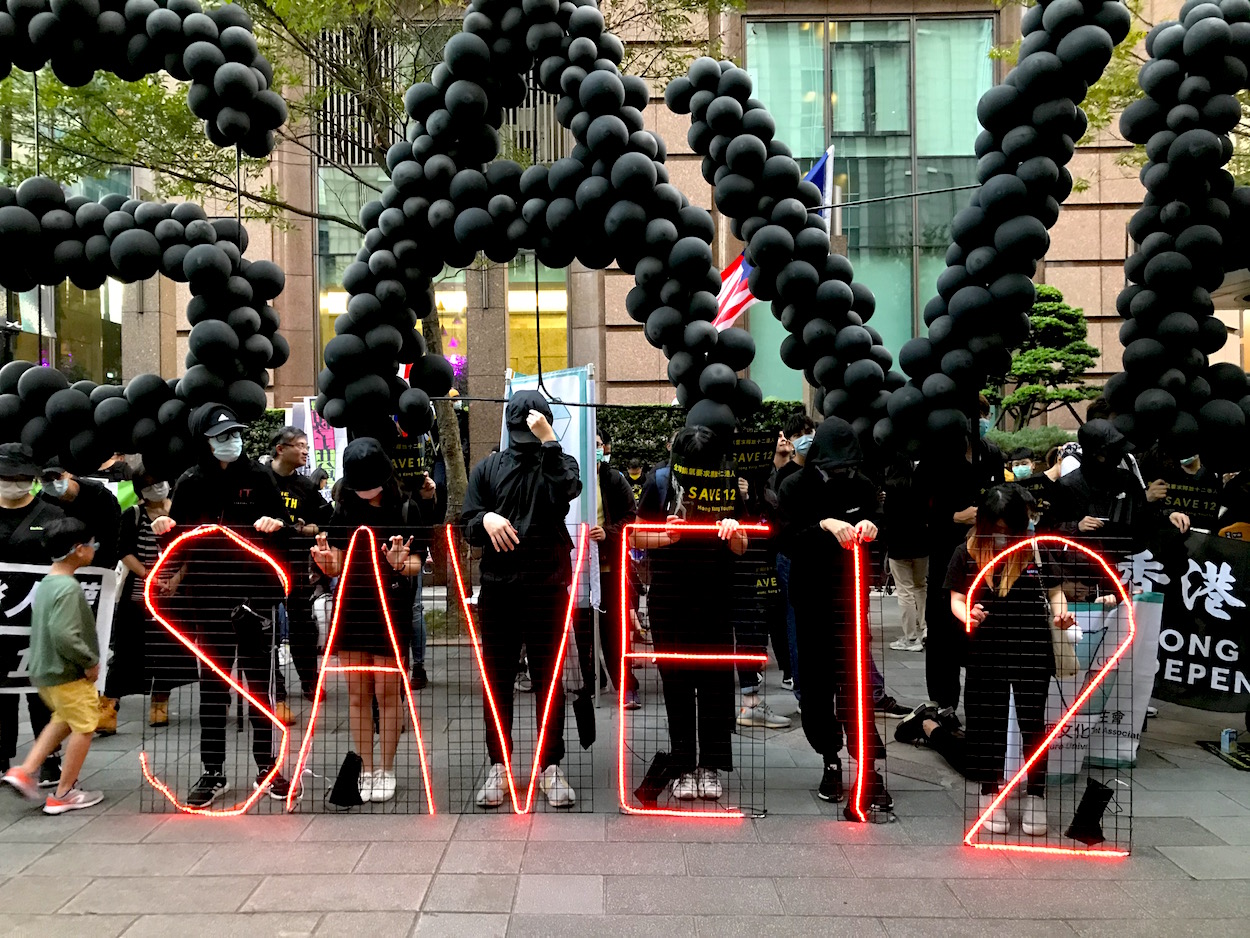 In comments during the rally, speakers pointed toward the need for Taiwanese to remember the names and actions of the twelve imprisoned Hongkongers, in order to prevent them from being forgotten and disappearing into Chinese jails. Speakers raised that the twelve Hongkongers had been denied access to lawyers and prevented from contacting their families. 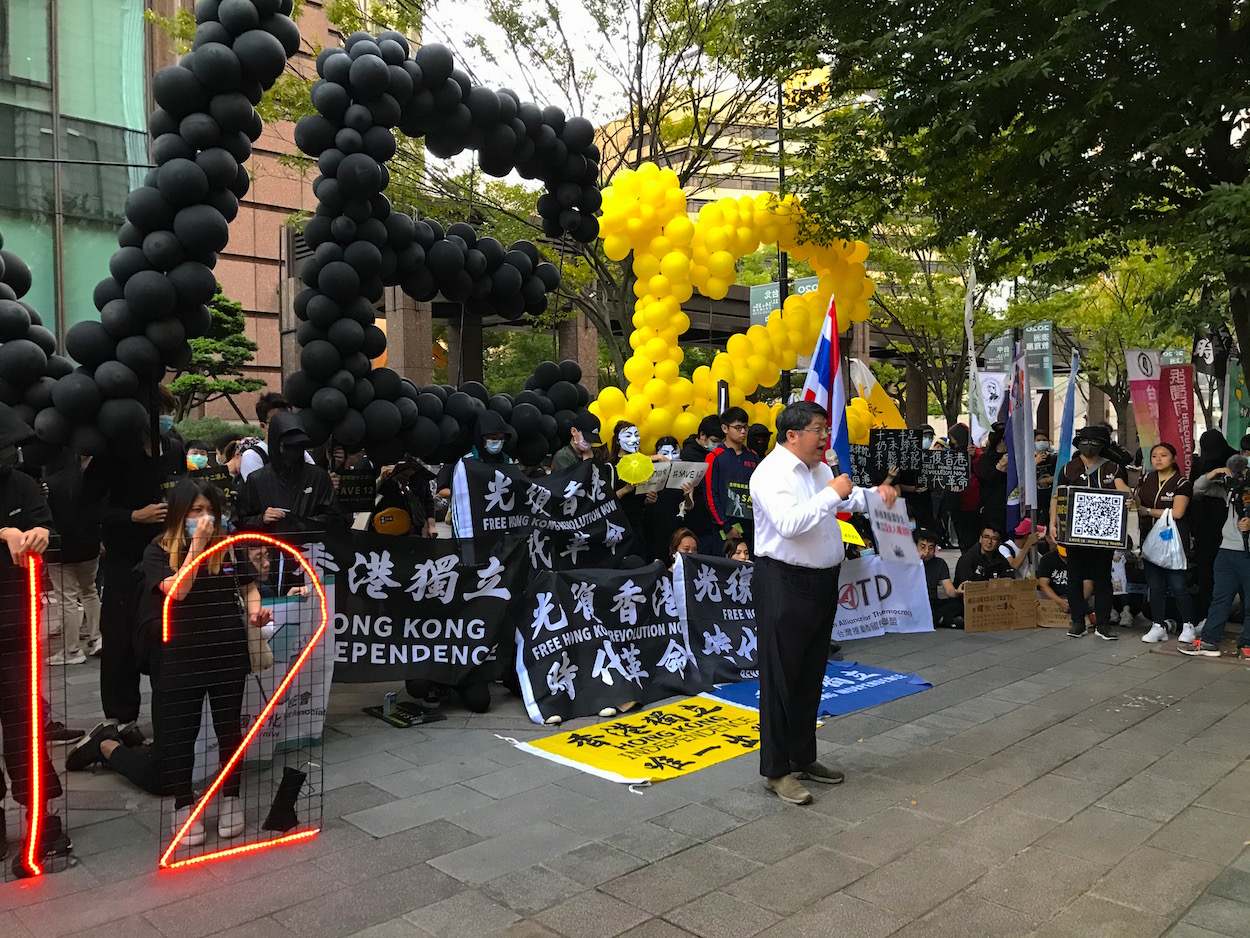 At the close of the rally, speakers highlighted how the actions of the Hong Kong police and calls for an independent probe into the actions of the HKPF pointed toward the need for regulatory measures for police, in Hong Kong but also in Taiwan. To this extent, Lai Chung-chiang of the Economic Democracy called for a “human rights court” to be set up through the Asia-Pacific Economic Cooperation (APEC) forum as a legal mechanism to make protections for human rights a precondition to regional trade integration, in the hopes that this could provide oversight over human rights abuses by China or other countries. Apart from calls for a repeal of the national security law in Hong Kong and the release of the twelve imprisoned Hongkongers, this was a key demand of the march.

It remains to be seen as to whether the Tsai administration will take further action to assist Hongkongers. High-ranking members of the DPP that have sought to push for action to help Hongkongers were present at today’s rally, such as Lin Fei-fan and Hung Sheng-han. 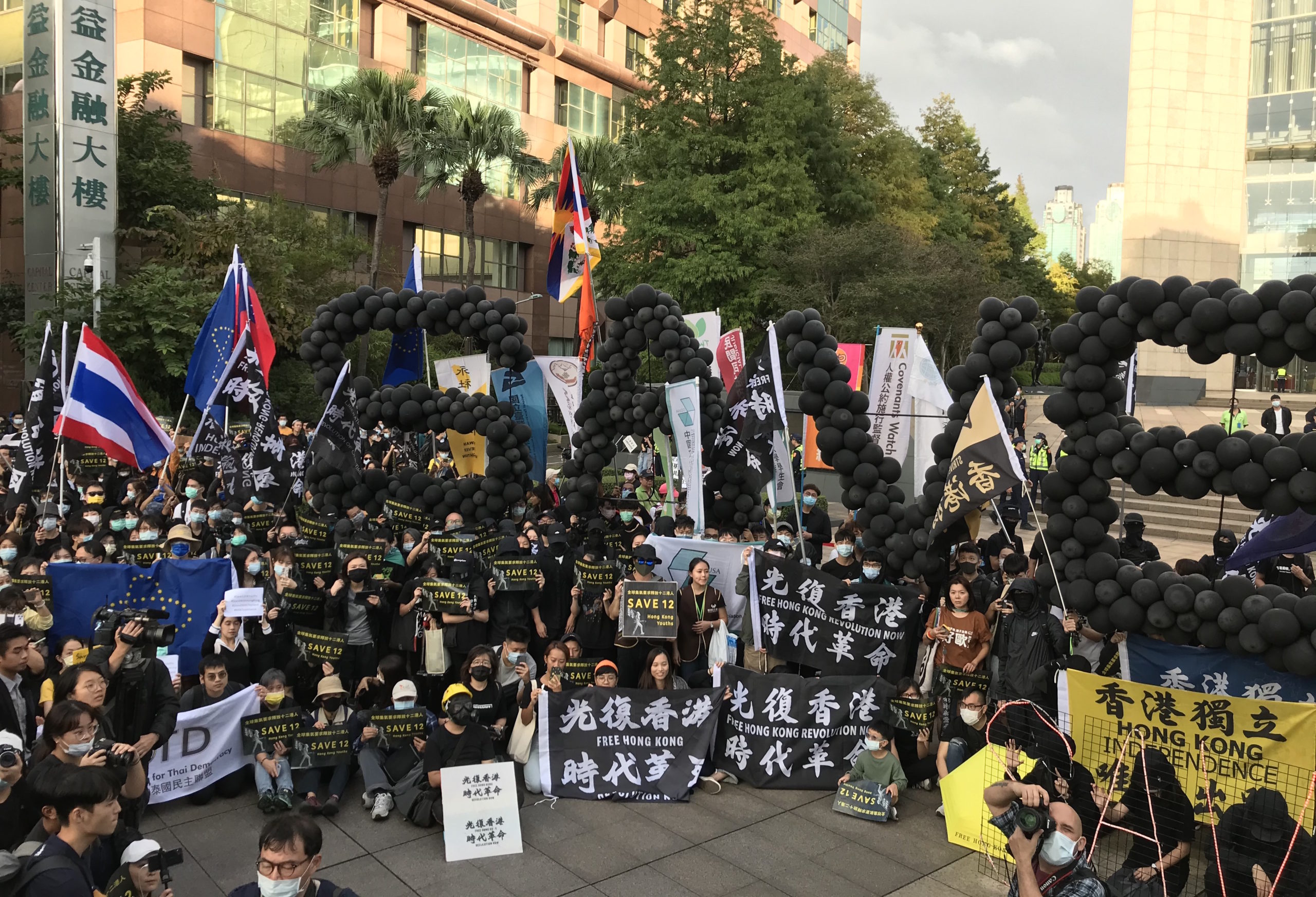 But despite that the twelve Hongkongers were imprisoned while trying to flee to Taiwan, the Tsai administration has been mostly silent on the issue afterward, with the Mainland Affairs Council urging Hongkongers to travel to Taiwan using legal means in a series of comments that many perceived as tone-deaf. The office previously set up by the Tsai to assist Hongkongers has, in some cases, denied Hongkongers from traveling to Taiwan on the pretext of the ongoing COVID-19 pandemic. Likewise, sea routes previously used by Hongkongers to travel to Taiwan are now known after having been reported by the media as blocked by the Chinese coast guard, creating further obstacles for Hongkongers fleeing to Taiwan. What comes next is still unknown.