ON OCTOBER 14TH, central Bangkok was flooded with tens of thousands of protestors, making their way from the Democracy Monument roundabout to the offices of the prime minister as chants of “Fuck the dictator” and “Reform the monarchy” rang out. Then, as demonstrators—the vast majority of them under 30 years old—trickled into the narrower streets near the offices, the unthinkable happened.

Out of nowhere, masses of police appeared, pushing the relatively small crowd to the side of the road, while the royal motorcade drove straight through the protestors. A wall of police, five to ten officers thick, held back crowds who screamed and jeered at the awkwardly smiling queen and prince inside the Rolls Royce as the protestors launched into a chorus of “My taxes”. 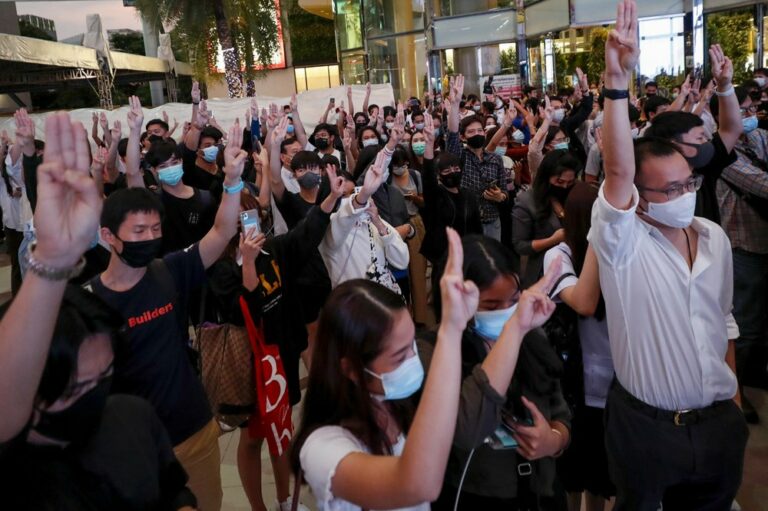 Such scenes were previously unimaginable in the kingdom, where the all-powerful and supposedly much-beloved monarchy are protected by some of the world’s harshest lese majeste laws. These laws are further reinforced by a superstructure of strict allegiance and adherence to the monarchy, from the state education system to the many fascistic militias and vigilante groups sponsored by the state. Many critics of the monarch, if not arrested, are forced into exile, where their lives are still at great risk. Overseas extrajudicial killings are common, most recently with Wanchalearm ‘Chalerm’ Satsaksit, who was living a quiet life in Cambodia and no longer politically involved when he was killed.

It was the murder of Chalerm that partially sparked these protests, as well as a litany of other grievances—from freedom of speech to parliamentary reform. Demonstrations on such a scale have seldom been seen in Thailand in recent years since the military coup of 2014. What makes this protest movement even more remarkable is the nature of the discourse on public display, particularly as it relates to the monarchy.

After the death of the genuinely beloved King Bhumiphol in 2016, his son Vajiralongkorn, known colloquially as Number 10, assumed the throne. Vajiralongkorn tightened his grip on power and shifted the institution of the monarch to become more involved in the politics of the country, something which he is nominally supposed to not interfere with, seeing as the head of state is a supposedly symbolic position. He is blamed for the banning of a popular liberal reformist party, Future Forward Party, which held a significant number of seats in parliament and was widely popular among the youth.

Vajiralongkorn is formerly known worldwide as the ‘playboy prince’ famous for his womanizing and hedonistic antics, causing much embarrassment to the many Thais who are forced by law to revere him. Yet these protests have pushed public discourse right to the limit, with protestors insulting and disparaging the monarchy in speeches that would be unimaginable just a few years ago.

The protestors’ demands are threefold, represented by the three finger salute and presented as a plan of action;

What exactly this final demand would look like in practice is still a mystery, as it is considered almost utopian by many of those in the movement; however, without a doubt, reform of the monarchy is the key final goal in these protests. Certainly, to some, that means complete abolition and even the execution of the monarchy, with guillotine memes becoming increasingly popular in private Telegram group chats.

The king himself spends the vast majority of his time in Germany, leaving the running of the nation in the hands of prime minister Prayut Chan-o-Cha, generally considered a military strongman and keen admirer of realpolitik. Prayut took power in a bloodless military coup back in 2014, ousting the popularly elected government of Yingluck Shinawatra.

It was the sixteenth coup in Thailand’s relatively short, roughly century-long parliamentary era. Today Prayut has to maintain a population that widely despises him. Even among his constituency of royalists his popularity appears shaky, as his supporters will ultimately side with the royal family if push comes to shove and he finds himself on the king’s bad side, particularly so after the embarrassment of the royal motorcade fiasco.

Despite the calls for democracy from today’s protest movement, Prime Minister Prayut argues that he was fairly elected in 2019. Indeed, elections were held, but they were widely considered a farce by everyone who does not support Prayut. The campaign period was marked by flagrant abuses by junta backed candidates, royal interventions, and dubious election result counts, as well as substantiated accounts of vote buying on Election Day. Moreover, before the election, Prayut installed a host of military officers to parliament with the same voting rights as elected MPs to swing the balance of power for him to achieve a majority.

Later in the evening, after the protestors confronted the royals, tents were pitched and many of the demonstrators camped out in front of the prime minister’s office. At 4 AM, riot police moved in, violently clearing the encampment and arresting 20 protest leaders. The movement, now leaderless, has taken on a completely different form in the following few days. One protestor, who asked not to be named, told me “We are not leaderless, actually we are leaderful, as we all (collectively) are leaders.”

Indeed this tactic seems to be working, private Telegram groups have ballooned in numbers, some as high as 170,000 members at the time of writing. Despite these huge numbers, however, the groups are remarkably well organized, with people posting only key information and not flooding the groups with unnecessary messages. Polls are posted with the caption “Where shall we protest? This poll closes in 20 minutes, as soon as it’s closed see you there.” Somehow this tactic seems to work, as mass crowds have gathered together for four days running now, despite a government ban on political gatherings of more than five people.

At these protests, demonstrators are again incredibly well organized. After facing a riot control truck on the night of the 19th which sprayed chemical-laced dyed water, similar to the effects of tear gas, protestors have begun to bring helmets, eye goggles, strong umbrellas, and other supplies in bulk.

They’ve also employed an ingenious system of communication, where group chants spread across the whole crowd to facilitate communication. For example: “We need water” will be chanted, then en masse, water bottles make their way to the frontline. Many are also learning basic sign language, as the police have recently used sonic weapons. They employ tactical retreats to avoid violent confrontation with government forces, as they know they are outmanned and outgunned, focused instead on shutting down key intersections, and bringing the capital to a halt.

This surprisingly effective mass organization has led to many suspicions of outside influence, with accusations, particularly from the Thai right wing, of US Government involvement. Bizarrely some on the left in the west have cottoned onto this, denouncing the protests as a ‘color revolution’. While it is true that some members of the (former) leadership have been involved with NGOs funded by NED, there is little evidence to show that the US government has any interest in removing the Thai monarchy. Indeed, the USA and NATO maintain a healthy relationship with Prayut, taking part in military exercises with Thai forces and the CIA using blacksites in the kingdom for illegal abductions and torture.

The most common accusation is against now jailed Anon Nampa, accusing him of being an imperialist CIA stooge. But just one glance at Nampa reveals his radical political leanings; notably, his Facebook profile picture is of the Thai communist revolutionary hero Jit Phumisak, who died fighting for the Maoist Communist Party of Thailand’s 1960s insurgency. Furthermore, the former leadership had a large anarchist component, the leftist anarchist groups of Dao Din and Samanchorn were well represented in the leadership and members still feature highly in the frontlines of the protests. This isn’t to say that this is a radical leftist revolution, as there are of course also many liberal capitalist groups that have joined the movement. But the protests do have a radical element.

What we are witnessing is primarily a grassroots, large tent, anti-monarchy protest, with limited geopolitical ramifications. It is an internal struggle for the future of Thai society. So far the large reactionary royalist base, known as the Yellow Shirts, have been relatively quiet, but they, along with their militias are standing by. The future of the movement is incredibly hazy, but, as one admin of the most popular Facebook protest page told me, “It will continue indefinitely, as long as the state continues to use force (the people) will keep showing up. As for the government making protesting illegal, the illegality brings us together.” 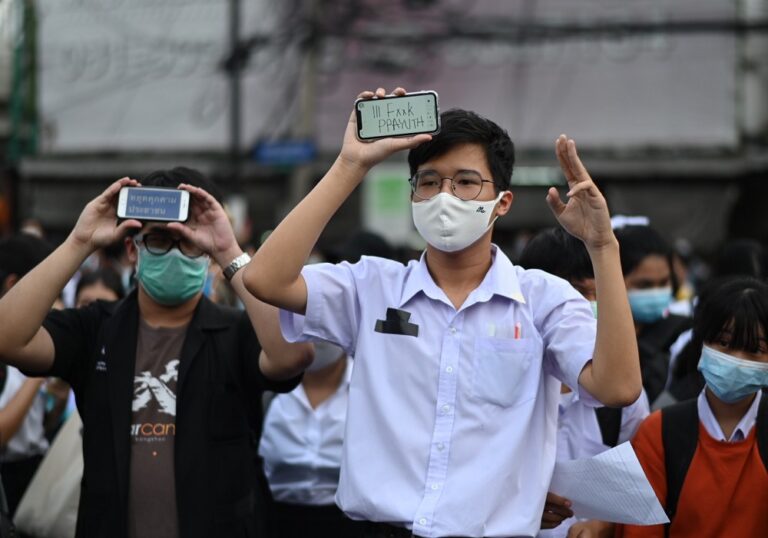 At the time of writing it looks highly unlikely that Prayut will concede to the protestors’ demands for his resignation or new ‘fairer’ elections. From an outside perspective, it seems the movement has little hope. Likewise, there is a fairly large appetite from the Thai right wing to violently crack down on the protests—particularly from hardcore royalists in light of the discourse on the monarchy and the motorcade fiasco. This makes a fresh coup to oust Prayut and appoint an even more hardline royalist prime minister to be a real possibility. Ultimately, if there is another coup it will be on the behest of the king, who may feel enough is enough.

Some protestors even want a royalist coup. Speaking to one anonymous organizer he told me “While a coup is not ideal it would help to radicalize people against the monarchy and, in the long run, I think it would benefit the movement.”

And there is always the possibility that the protests simply peter out. But for now, among those involved, there is a large appetite for change. What that change will look like or what shape it will take remains extremely unclear.

For more on the protests in Thailand, see DinDeng, a journal and collective of radical views on Thailand and Southeast Asia

NOTE: Since this article was written, two leaders of the initial protests have been released on bail, Parit “Penguin” Chiwarak and Panusaya “Rung” Sithijirawattanakul, but protestors insist that they will continue to be leaderless–or “leaderful” as they often put it. Furthermore, Prayut has said he will be lifting the ban on political gatherings for the time being.