Reports of Forced Tibetan Labor Camps Should Be Concerning

A RECENT REPORT by the Jamestown Foundation suggested that the Chinese government had begun introducing Xinjiang-style “militarized vocational training” to Tibet, with thousands of Tibetans having passed through such training programs. The report states that over 500,000 Tibetans have passed through such programs—a not insignificant number, seeing as the global Tibetan population is thought to be around 6.5 million. In particular, the report is concerning because it suggests that China has begun rolling out policy similar to that implemented in Xinjiang targeting other ethnic minority groups, with a focus on ideological indoctrination of ethnic minority groups, and dispersing them as a labor force across China.

It is believed that over one million Muslim-majority Uighurs are currently imprisoned in “reeducation” camps in Xinjiang. Although the Chinese government claims that the purpose of such camps is to stamp out extremism, it is thought that these camps aim to eradicate Islam as a religion among Uighurs. However, the Chinese government has also been accused of using Uighurs as unpaid labor for factories in these camps, with concerns raised about how Xinjiang is a large source of cotton for Chinese factories. 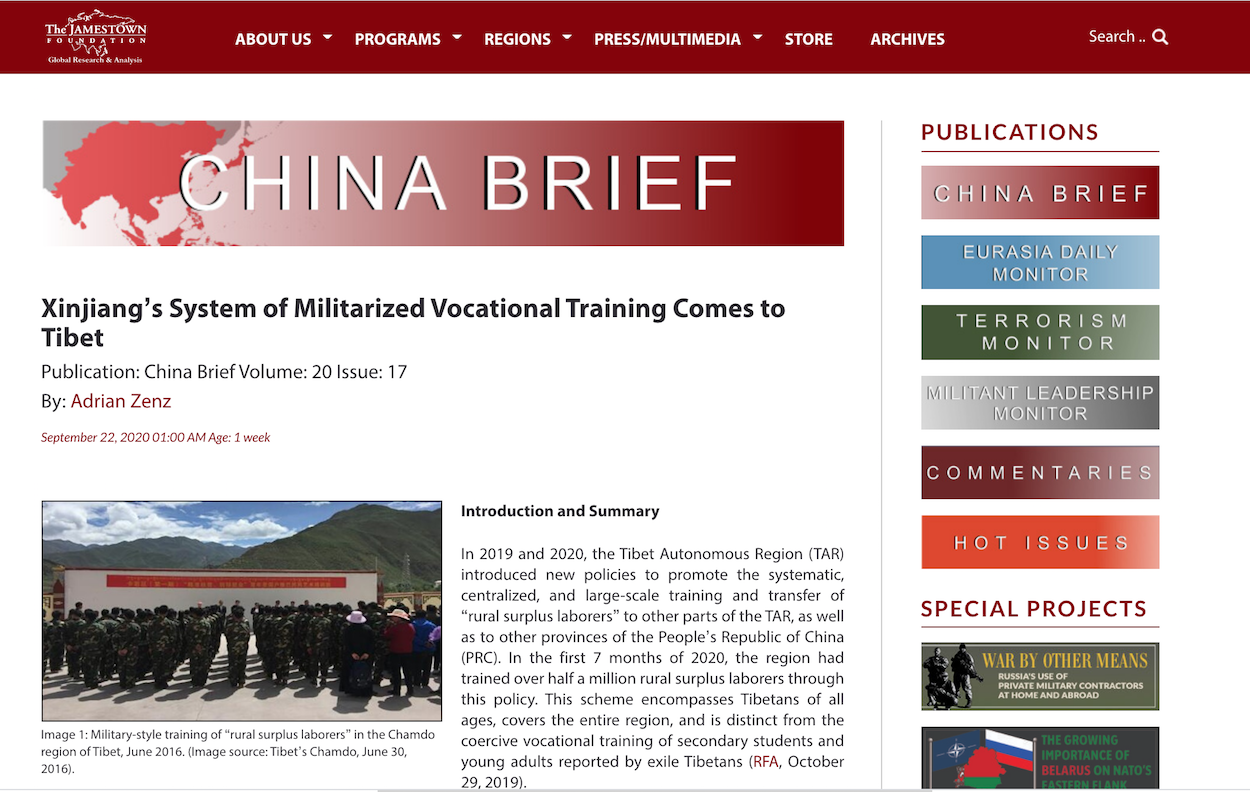 Screenshot of the report

More generally, the Chinese government has sought to crack down on independent cultural identity among ethnic minorities in China, fearing that this could lead “separatism” and “color revolutions.” The Chinese government seems to view Islam as contributing toward independent identity among Uighurs, hence why it hopes to push Uighurs away from their religion. One observes similarly with efforts to phase out the teaching of Mongolian in schools in inner Mongolia, with the imposition of Mandarin teaching being aimed at assimilating Mongolians to the Chinese Han majority.

What this points to, however, is to what extent contemporary China is a Han ethno-state. In the past two years, one has increasingly seen reports of forced sterilizations of Uighurs in Xinjiang—much as it also occurs in western countries such as the United States. One has also seen reports of Uighur women being forced to share beds with male Chinese officials.

It is generally unsurprising that large and powerful states view ethnic minority populations as dangerous, fearing that they will prove restive against the imposition of outside authority. So, then, does one see attempts to destroy independent cultural identity and force minority groups to assimilate to the Han majority.

The Chinese government previously sought to provide large subsidies to areas with large ethnic minority populations, seeing as ethnic minority groups are often less well-off than their Han counterparts. One wonders, though, whether the use of “militarized vocational training” represents a shift in tactics by the Chinese government, with the shift toward instead using ethnic migrant groups as a cheap source of labor, and seeking to disperse ethnic minority populations as a means of preventing collective action among such groups.

Given the draconian measures taken by the Chinese government toward Tibetans in past decades, news of Tibetan mass detentions should not be surprising. At the same time, one notes that China tends to roll out ethnic minority policy in a blanket manner.

It is already difficult to obtain information about Tibetans and Uighurs, who are among China’s largest ethnic minorities. It proves even more difficult to obtain information about the status of smaller ethnic minority groups in China, raising questions about whether similar policies have been rolled out for such groups. For example, if Uighurs are primarily being put in “reeducation camps” as an effort at uprooting Islamic religious belief, one notes that China has other, smaller ethnic minority groups that are majority Muslim.

Yet at the same time, one generally expects those who have been dismissive of the mass detention of Uighurs to also prove dismissive of this new report about Tibetans. The report was composed by researcher Adrian Zenz, whose reports on Xinjiang have been instrumental in raising awareness regarding Uighur mass detentions, but whose links to right-wing political organizations have sometimes raised eyebrows. Such individuals are likely to dismiss reports about militarized vocational programs as falsified and wholly concocted. That being said, the actions of the Chinese government occur rather generally among large states, in terms of their behaviors toward minority populations, as one frequently observes of convergent political behavior between the US or China. And so there should not be anything surprising in the slightest regarding continued abuses of minority groups in China.