MEMBERS OF the Taiwan Railways Union (台鐵工會) protested outside of the Ministry of Transportation and Communications earlier this month. Workers called for the Taiwan Railways Administration (TRA) to pay overtime it owes its workers for the months of May and June and demonstrated against a new work schedule that would begin to be implemented next year.

According to members of the Taiwan Railways Union (TRU), they have not been paid overtime that they are owed for May and June, with reportedly over 1,000 train car workers and 100 dispatchers affected. Most are owed between 5,000 and 10,000 NT, though some workers are owed upwards of 20,000 and 30,000 NT. The company is thought to owe workers close to 30 million NT.

The TRA has stated that it will pay overtime, but union members have been critical of the late pay, seeing as workers require salaries to be paid on time to manage their lives, but this may be affected by overtime pay.

Likewise, while the inspectors from the Department of Labor carried out a labor inspection, in response to a petition by TRA workers, labor groups have been critical of the means by which it was carried out. Department of Labor inspectors reportedly only inspected the first floor of the Taipei Main Station before leaving. Workers who were owed overtime pay were on the fourth floor of the Taipei Main Station, as a result of which they were not able to provide testimonies to labor inspectors.

It is a broader issue in Taiwan that many companies deny overtime pay to their workers, using illegal company rules regarding accounting for overtime pay that does not correspond to the actual number of hours per day that workers work. Yet labor inspections are often accused by unions of being toothless, if they take place at all, particularly given that labor inspectors are required to personally observe violations of labor law to document them.

To this extent, the TRU has criticized the new work schedule that the TRA will implement next year as reducing the pay for TRA workers. Indeed, because of its current inability to pay overtime, the TRA has chosen to have station workers and train car workers take an extra day off starting in August and September, after which train conductors will also be mandated to take an extra day off, policy which will gradually be rolled out across different parts of Taiwan, starting in Kaohsiung and Hualien, and then Taipei and Yilan. Next year, starting in February and March, workers will be mandated to take two days off per month, a schedule that will be completely rolled out by September last year. 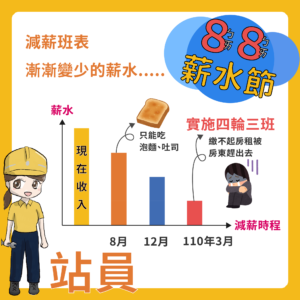 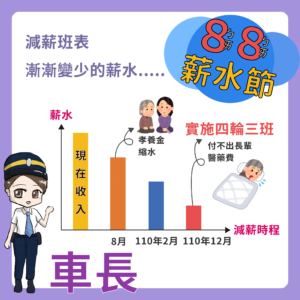 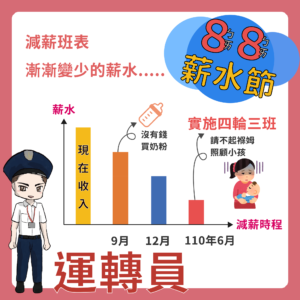 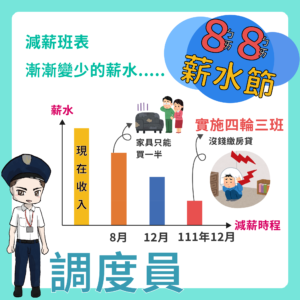 The TRA has been criticized by union members as seeking to reduce the hours that its employees work rather than pay them overtime or to hire new staff. To this extent, the TRA has been accused of cost-cutting and displacing a disproportionate work burden onto the workers, who will have to take on increased responsibilities with reduced staff. As such, the TRA is accused of endangering workplace safety and the quality of service, despite that this could prove dangerous—for example, a contributing factor to train accidents that have occurred in past years is thought to be that train operators were overworked or pushed into situations where they had to rush in order to meet tight schedules.

However, such actions are far from unheard of in Taiwan’s transportation industry. Strikes in the airline industry in the years since the historic 2016 China Airlines flight attendants’ strike have occurred for similar reasons, with management rearranging work schedules to cut costs, without hiring new workers while increasing the number of tasks that current workers have to take on. These strikes have taken place in air carriers such as China Airlines and EVA, involving flight attendants, pilots, mechanics, and others.

It is to be seen whether the TRU will be successful in pressuring the TRA management. The Ministry of Transportation and Communications has emphasized its hiring of new workers in the past year and stated that it will coordinate with TRA workers to ensure that they are not overworked, but it is to be seen if this will genuinely take place.