BORDERS IN TAIWAN remain closed to the majority of foreigners due to the ongoing COVID-19 pandemic. However, several recent diplomatic visits have taken place in past weeks, an indication of the gradual opening up of Taiwan’s borders to limited travel.

In particular, the recent visit to Taiwan by American Secretary of Health and Human Services Alex Azar has thrown this shift in the Tsai administration’s border policy into sharp relief. Azar’s visit to Taiwan was the highest-ranking diplomatic visit by an American official since 1979. Azar and his delegation were not required to undergo a fourteen-day quarantine, though some called for such measures to be taken for public health or to demonstrate the need for quarantine measures to Americans. Nevertheless, Azar and his delegation tested negative for COVID-19 when they arrived in Taiwan before they were allowed to enter. 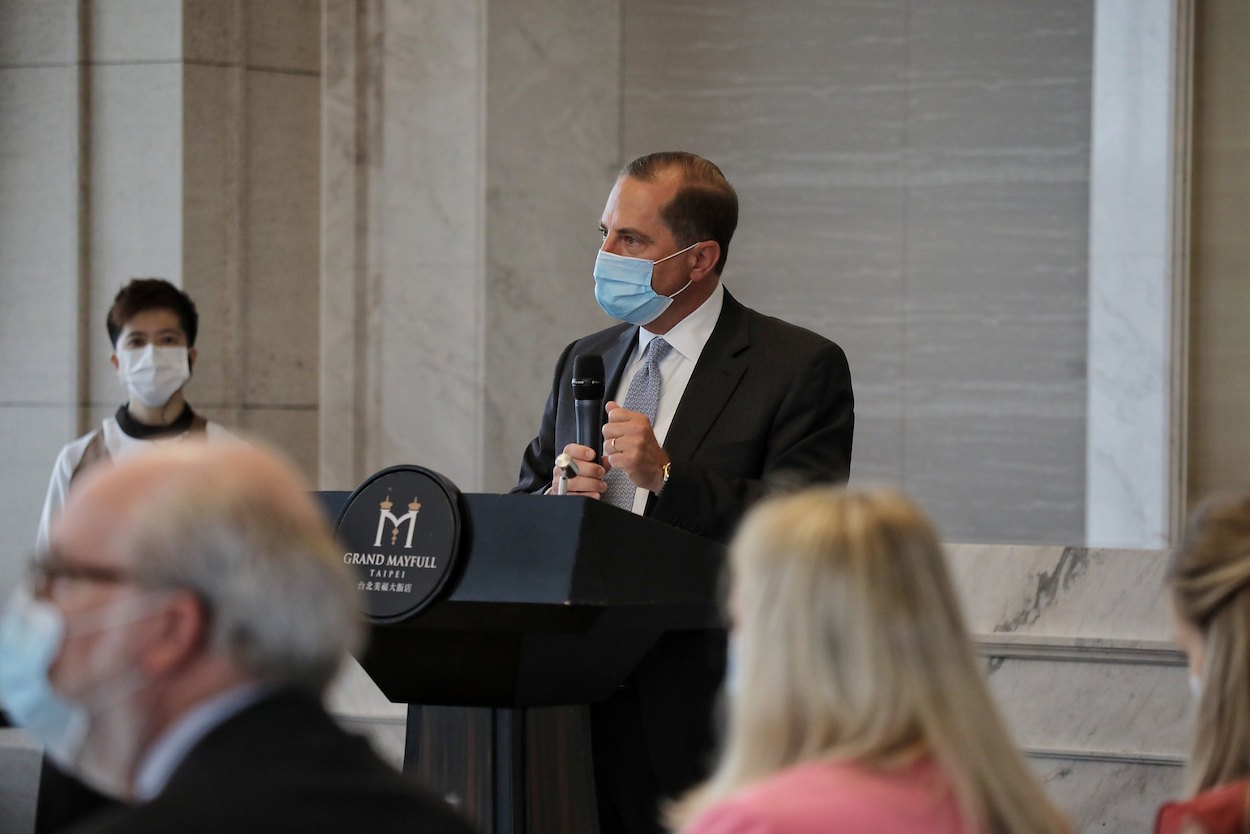 Azar’s visit to Taiwan was conducted under the auspices of learning from Taiwan’s experiences fighting COVID-19. Taiwanese politicians including President Tsai Ing-wen, Vice President William Lai, Foreign Minister Joseph Wu, and Minister of Health Chen Shih-chung were among those to meet with Azar.

In the same timeframe as the Azar visit, though receiving decidedly less coverage, Taiwan also saw a visit from a diplomatic delegation from Japan. The delegation was led by former Japanese prime minister Yoshiro Mori, a Liberal Democratic politician who served as prime minister of Japan from April 2000 to April 2001. Mori’s diplomatic visit was conducted under the auspices of mourning for recently deceased former president Lee Teng-hui. Mori met with Tsai during his visit, among others.

Both visits served diplomatic purposes, in signaling stronger bilateral ties between Taiwan, the US, and Japan. In the wake of two visits, Prague mayor Zdenek Hrib and Czech senate president Milos Vystrcil are now slated to visit Taiwan at the end of the month, leading a ninety-member delegation. Further diplomatic visits could take place, such as if calls by independent legislator Freddy Lim and other pan-Green lawmakers for the government to invite the Dalai Lama to visit Taiwan are taken up. It is expected that Hrib, Vystrcil, and others will also be exempted from quarantine protocols if they test positive for COVID-19 upon arrival in Taiwan.

It is clear that Taiwan is now open to diplomatic visits from politicians if this will boost Taiwan’s standing on the international stage. In response to public backlash regarding children with a Taiwanese parent currently in China that were not allowed to travel to Taiwan during the pandemic to date, the Tsai administration will now allow children who have one Taiwanese parent and hold a Taiwanese resident certificate to enter Taiwan. Starting earlier this month, Taiwan is now open to all international students enrolled in degree programs returning to Taiwan, something that could result in tens of thousands of international students returning to Taiwan in the near future. Taiwan is currently allowing foreign visitors for medical treatment in Taiwan.

At the same time, the Tsai administration continues to exclude certain groups from entering Taiwan. Chinese students, for example, are excluded from other international students in being allowed to return to Taiwan. While the Tsai administration has claimed that this is due to Chinese pressure, both sides currently accuse the other of being the party that refuses to allow Chinese students to return to Taiwan. 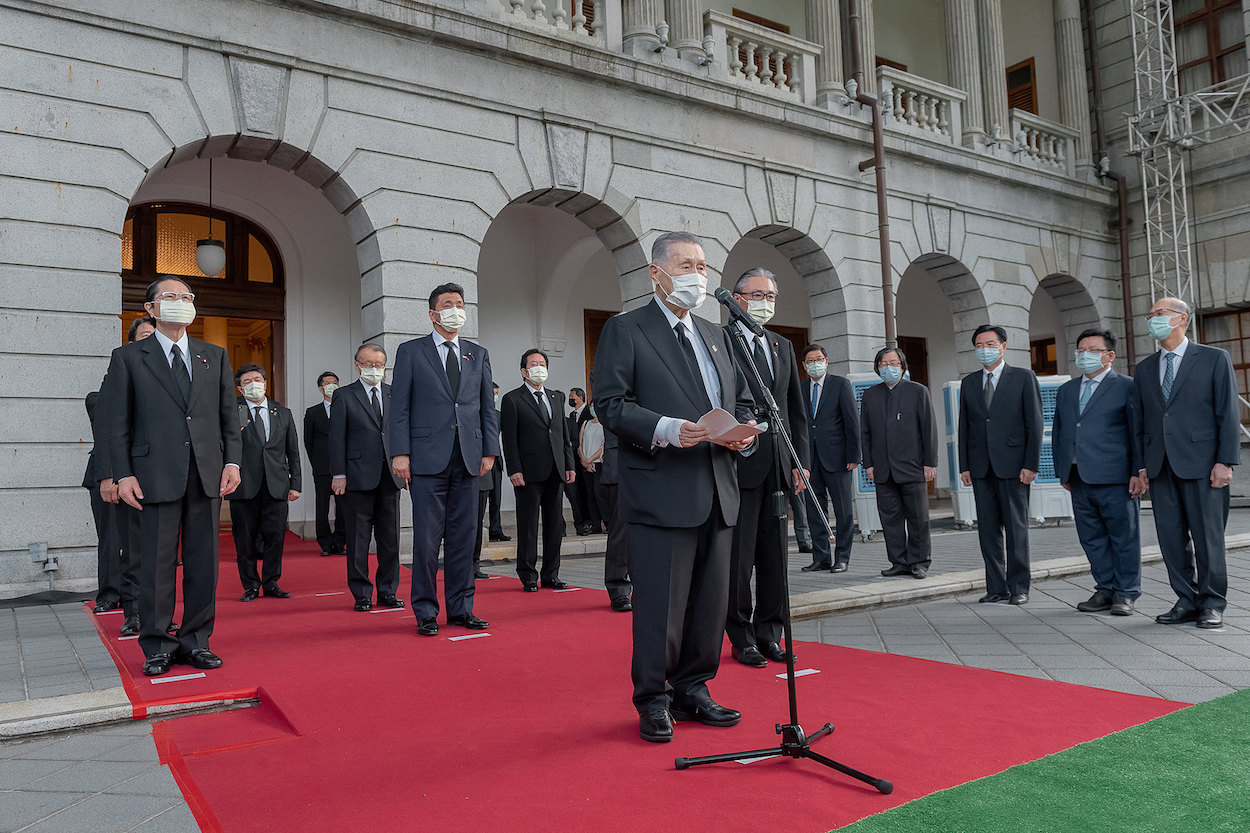 But, at the end of the day, the Tsai administration has not taken a particularly strong stance that in the absence of Chinese pressure, Chinese students would be allowed to return to Taiwan. Such a move would put the ball in Beijing’s court when it comes to whether Chinese students are to be allowed to return to Taiwan, seeing as Beijing currently claims it is open to the idea. One also notes that students from China, Macau, and Hong Kong were excluded from policies affecting other international students in past months because of the fact that they are not technically foreigners under the provisions of the ROC constitution.

Indeed, the Tsai administration has instead generally sought to downplay the current exclusion of Chinese students from returning to Taiwan. It is possible that there are ideological pressures within the DPP have led to a refusal to permit Chinese students to return to Taiwan, or that the Ministry of Education and Mainland Affairs Council have differences of opinion in whether to allow Chinese students to return to Taiwan, meaning that lack of resolution for the issue is the product of a bureaucratic deadlock. This would hardly be the first time that this has happened before, with government ministries in Taiwan sometimes fighting about overlapping bureaucratic turf.

To this extent, in past days, Taiwanese president Tsai Ing-wen has been condemnatory of the actions of the Hong Kong government over the past week, in arresting democracy activists such as Agnes Chow and conducting a police raid on the offices of pro-democracy tabloid Apple Daily under the provisions of a recently passed national security law. Tsai called on the Hong Kong government to establish dialogue with Hong Kong residents, rather than shrug off their demands for greater political freedoms, as it has over the course of the last year of protests in Hong Kong.

In July, a new office, the Taiwan-Hong Kong Office for Exchange and Services, was opened in Taipei to assist Hongkongers seeking work, study, investment opportunities, or asylum in Taiwan. The Tsai administration trumpeted the opening of the office as a means for Taiwan to help Hongkongers who may be in need of refuge, perhaps facing years in jail for participation in demonstrations. While the Tsai administration was pressured by members of the DPP drawn from Taiwanese youth activism who had longstanding ties to Hong Kong activists, nor were the Tsai administration’s actions entirely self-disinterested. Framing Taiwan as assisting Hongkongers in Hong Kong’s present moment of need would be a means of using Hong Kong to draw further distinctions between Taiwan and China. 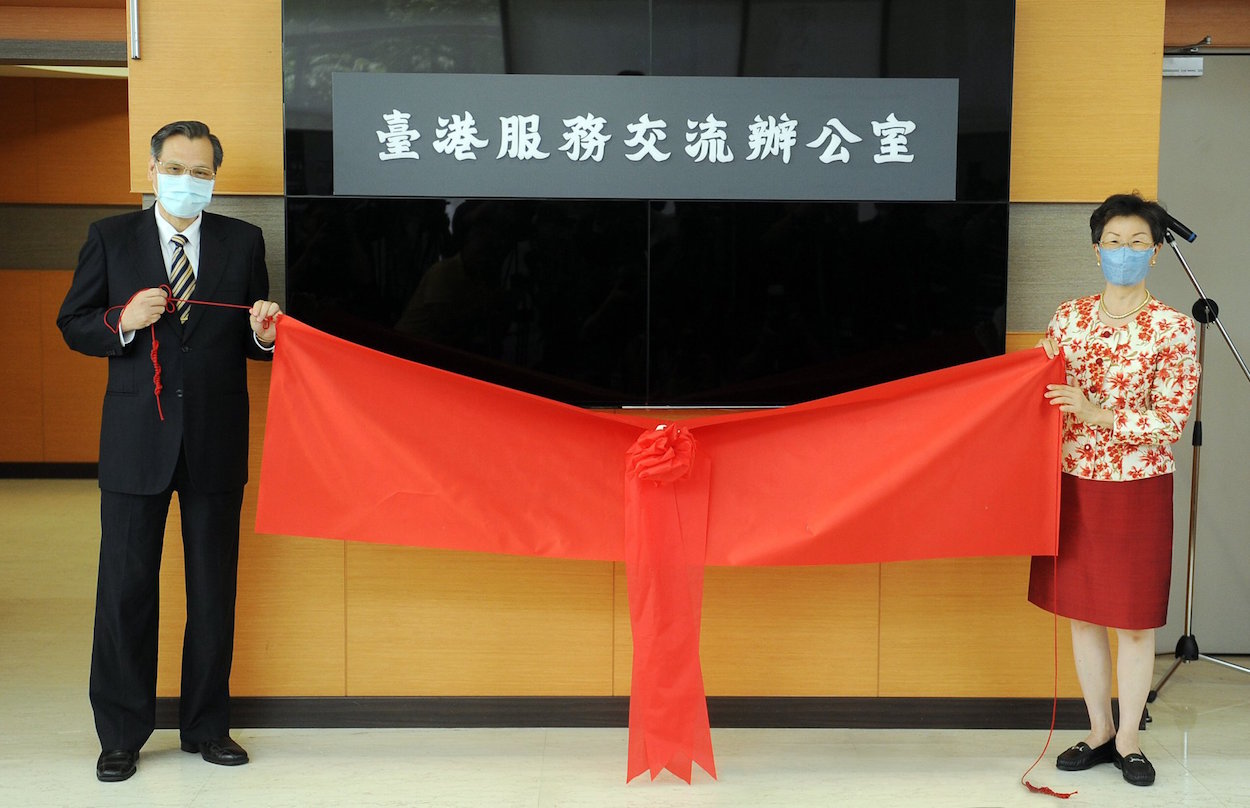 The unveiling of the Taiwan-Hong Kong Office for Exchange and Services. Photo credit: Mainland Affairs Council/Facebook

Among the Hongkongers who have been targeted in the recent political crackdown were individuals that previously tried to flee to Taiwan. As reported by RFA Chinese, this included 19-year-old Tony Chung, a former member of the localist group Studentlocalism, who was among the first to be arrested in the crackdown and possibly the first individual targeted under the national security law.

Chung previously sought to inquire as to means of escaping to Taiwan, but did not want to travel to Taiwan because of the fear that this could block off a possible escape route for other, lesser-known activists. Only when facing the threat of imminent prosecution did Chung contact the Taiwan-Hong Kong Office for Exchange and Services, only to be told that he would not be allowed to travel to Taiwan because of the ongoing COVID-19 pandemic.

Chung was assisted by a legislative assistant, who inquired with various political parties as to whether there might be means of assisting him. According to this legislative assistant, it appears as though lack of coordination has resulted in a bureaucratic deadlock between government bureaus such as the National Immigration Agency and Mainland Affairs Council, preventing concrete steps from being taken to assist Hongkongers.

It generally appears, then, as though the Tsai administration hopes to appear as though it is taking steps to assist Hongkongers while actually doing little. The Tsai administration’s hands may largely be tied in Hong Kong, with the possibility of retaliatory actions by the Hong Kong government against Taiwanese diplomatic staff or Taiwanese in Hong Kong if they actively help Hongkongers flee legal charges.

Yet, again, given that borders are open for visits by delegations of foreign dignitaries, international students, medical travelers, and others, the Tsai administration could allow Hongkongers that are able to make it to Taiwan through to be granted asylum, rather than using the COVID-19 pandemic as a pretext to prevent them from traveling to Taiwan to begin with. For example, it is well known that the pretext of medical travel has, in fact, served as a means for political dissidents to successfully travel to Taiwan in the past, and there are reports of Hongkongers secretly traveling aboard fishing vessels to travel to Taiwan. Hongkongers that undergo fourteen-day quarantines should, of course, be free of COVID-19, and individuals seeking asylum are not likely to arrive in Taiwan in such numbers as to overwhelm Taiwan’s infrastructure for maintaining quarantines.

Last year, it was believed that two hundred Hongkongers had fled to Taiwan to seek asylum by June, with Hong Kong immigration up by 28% from the previous year by August, and 5,000 Hongkongers granted permits to stay in Taiwan by the end of the year. Such numbers suggest that the number of Hongkongers that travel to Taiwan seeking asylum may not be higher than, say, the numbers of international students returning to Taiwan.

Taiwan has kept its number of COVID-19 low, with less than 500 confirmed cases and only seven deaths. As such, the government is understandably wary of jeopardizing the stable COVID-19 situation in Taiwan. But although Hong Kong is seeing a second-wave of COVID-19 cases at present, Hong Kong is still not more dangerous than many of the places from which Taiwan is allowing travel from. 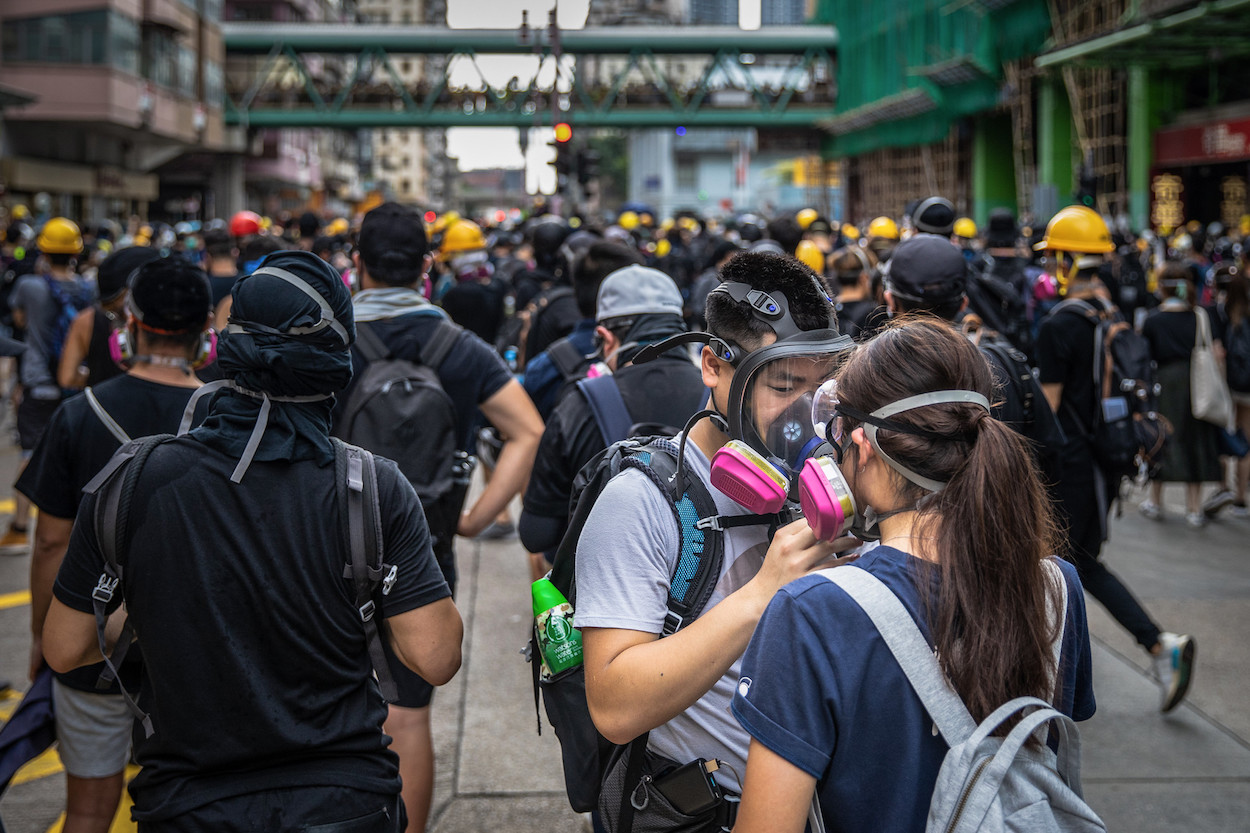 Despite Taiwan recently seeing a high-profile diplomatic visit from America, it is currently the world leader in COVID-19 cases at present, with over fifty thousand new cases added each day. Japan sees over one thousand new cases on most days and the Czech Republic adds hundreds of cases per day. All of these are among the countries that Taiwan has seen diplomatic visits from and from which international students are returning to Taiwan—yet, again, it is key to note that travelers from such countries should be free of COVID-19 after undergoing fourteen-day quarantines.

The COVID-19 pandemic proves no excuse as to denying Hongkongers entrance to Taiwan, then, when Taiwan is already welcoming diplomatic delegations, international students, medical travelers, and others. However, it is generally the case that the Tsai administration has a poor record regarding asylum seekers, with individuals such as 22-year-old Chinese asylum seeker Lee Jia-bao remaining in diplomatic limbo, and one expects this to continue to be the case regarding Hongkongers—even when Tsai made Hong Kong a frequent talking point in her 2020 reelection bid. Such hypocrisy is far from surprising.

Political parties including the NPP and TPP have called for assistance to be provided to Hongkongers, with the TPP, in particular, lashing out at the Tsai administration for its lack of action to assist Hongkongers. In campaigning for the Kaohsiung mayoral by-election, which is to take place this Saturday, TPP seems to have taken up an idea previously touted by Han Kuo-yu of the KMT, in suggesting that Kaohsiung should become a place of refuge for Hongkongers. Given party chair Ko Wen-je’s controversial cross-strait exchanges with China, the TPP is likely hoping to avoid being seen as too pro-China of a political party. But in the meantime, it broadly remains to be seen whether there will be sufficient public pressure to push the Tsai administration to take concrete action on the matter.