FOLLOWING ALLEGATIONS that KMT Kaohsiung mayoral by-election candidate Jane Lee (李眉蓁), also known as Li Mei-jhen, plagiarized 96% of her master’s thesis, an unusual political spat has broken out between the pan-Blue and pan-Green camps. Members of the pan-Blue and pan-Green camps are now slinging allegations of plagiarism or illicit academic ties against members of the other political camp.

Lee, whose master’s degree is from National Sun Yat-sen University in the Institute of Public Affairs Management, is currently serving as a Kaohsiung city councilor. At 41 years old, Lee is generally thought of as one of the younger politicians in the KMT. In running her for a mayoral by-election she was unlikely to win—seeing as KMT mayor Han Kuo-yu was recalled by large margins in June—the KMT likely sought to give exposure to an up-and-coming politician. 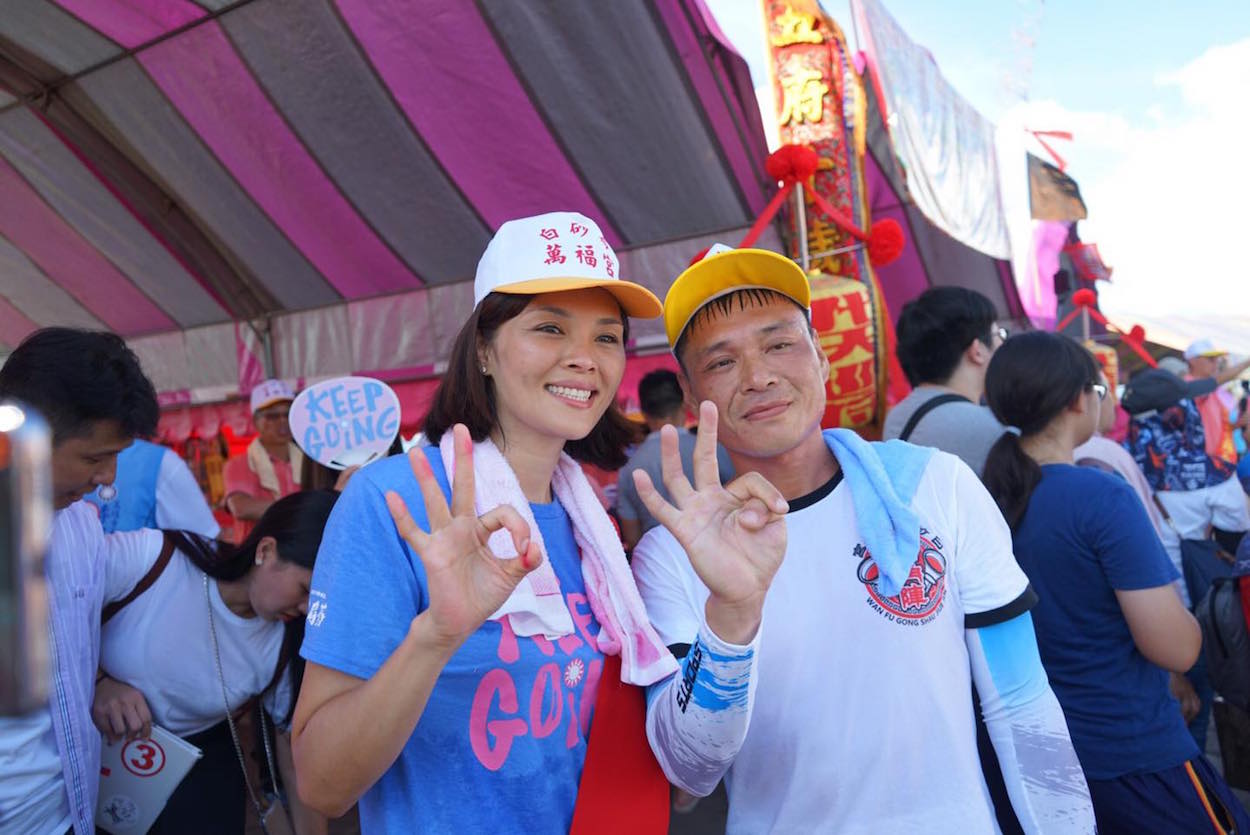 But Lee was accused last week of having plagiarized 96% of her master’s thesis from Tung Chen-yuan (童振源), who currently serves as minister of the Overseas Community Affairs Council under the Tsai administration. An investigation by National Sun Yat-sen University also found substantial similarities between Lee’s thesis and academic work by not only Tung, but also the master’s thesis of Lei Cheng-ju (雷政儒), whose master’s degree was from the Department of Public Administration and Policy at National Taipei University.

For her part, Lee admitted to wrongdoing and stated that she would be giving up her master’s degree—although, as critics have pointed out, there is not actually any provision for giving up a master’s degree in the Degree Conferral Act. The KMT has stated that it would continue to support Lee in the Kaohsiung mayoral by-election. Former Kaohsiung mayor Han Kuo-yu will continue to make campaign appearances with Lee. KMT chair Johnny Chiang has stated that he sees Lee as having made sufficient amends with her apology.

But while stating that she had made a mistake, Lee also stated that she would only clarify matters regarding her thesis if current president Tsai Ing-wen reveals the truth regarding her doctoral dissertation. After deep Green critics of Tsai that begrudged her for not taking a stronger stance on advocacy of Taiwanese independence began to embrace conspiracy theories that Tsai had never completed her doctoral dissertation or had plagiarized her dissertation last year, such claims were also embraced by the pan-Blue camp. More generally, accusations of plagiarism or academic against Taiwanese politicians are commonplace, pointing toward the importance that society places on education; one notes that all of Taiwan’s democratically elected presidents have held Ph. Ds. Yet with these comments, Lee was seeking to distract from her own scandal.

Since the initial controversy broke, however, the pan-Green and pan-Blue camps have also both embraced accusations that politicians of the other camp are guilty of plagiarism or academic wrongdoing.

Much scrutiny from the pan-Green camp has focused on Lee’s elite background, as the daughter of former Kaohsiung city councilor Lee Jung-chung (李榮宗), as potentially a reason as to why she would be willing to plagiarize a master’s thesis rather than do her work. The Taiwan Statebuilding Party, a pan-Green Third Force party formed after the Sunflower Movement, alleged on Saturday that, as former KMT legislator Ho Tsai-feng (侯彩鳳) and recently deceased KMT Kaohsiung city council speaker Hsu Kun-yuan (許崑源) were also at Institute of Public Affairs Management at National Sun Yat-sen University and were on the committee that examined Lee’s thesis, this could suggest political favoritism. KMT legislator Yu Yueh-hsia (游月霞) has also been accused of having obtained a master’s degree through her political connections, despite only having held a vocational high school degree before she was elected as legislator.

For its part, the KMT has centered criticisms on Presidential Office secretary-general Su Jia-chyuan and Pingtung county commissioner Pan Men-an, claiming that they have committed acts of plagiarism. Mainland Affairs Council minister Chen Ming-tong is also accused of having served as the doctoral supervisor of many pan-Green politicians and having allowed them to easily obtain degrees.

Others have sought to call attention to what the Lee controversy indicates in terms of Taiwan’s education system as a whole. Union of Private School Educators president Yu Jung-hui (尤榮輝) and Changhua county councilor Huang Sheng-lu (黃盛祿) have been among those to point toward this phenomenon as reflecting the commercialization of Taiwan’s educational system. 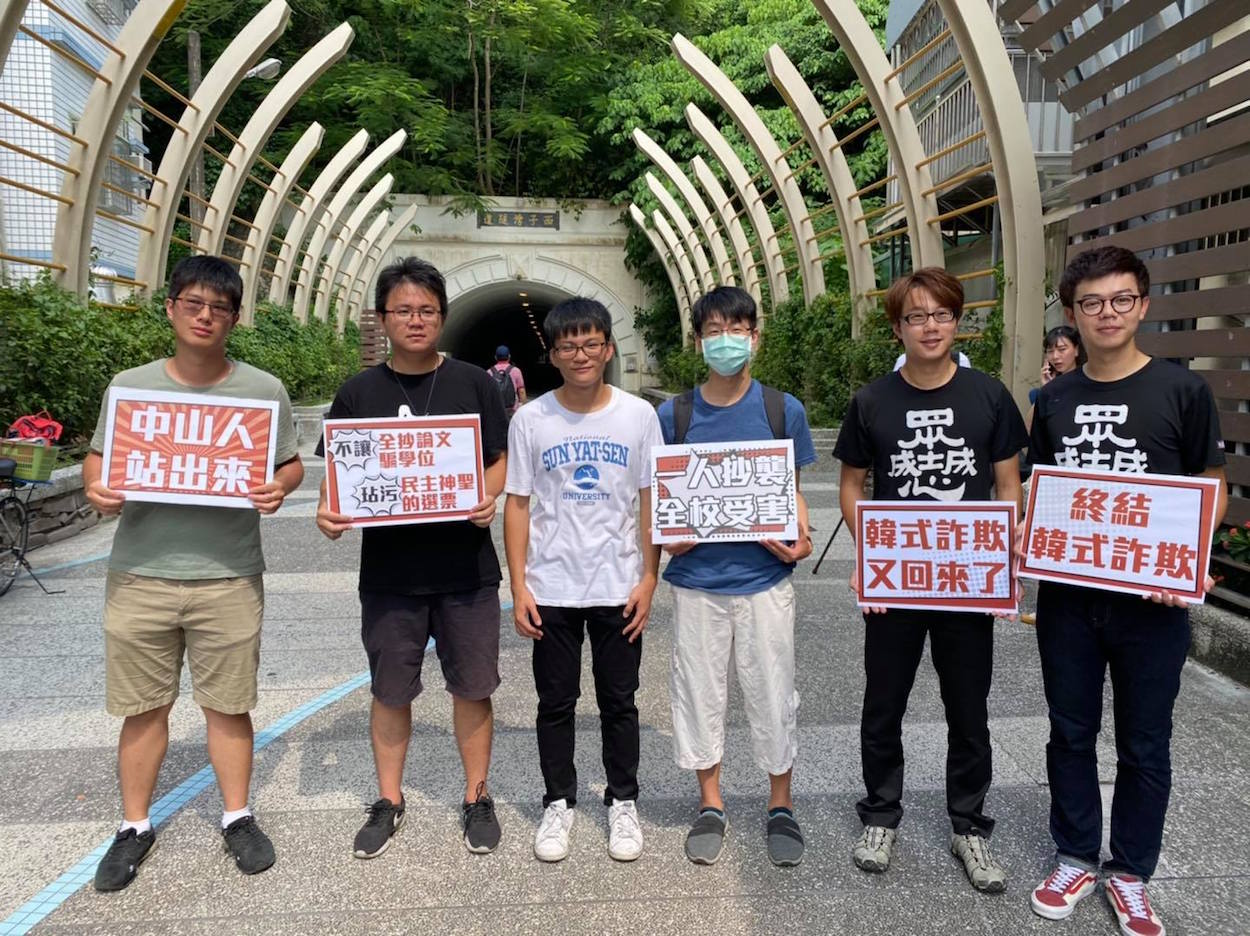 Students at National Sun Yat-sen University calling for Lee’s degree to rescinded if plagiarism accusations are found to be true. Two students on the right are wearing t-shirts from WeCare Kaohsiung, which organized the recall vote against Han Kuo-yu in June, and calling for an end to “Han-style fraud.” Photo credit: 台灣基進高雄黨部/Facebook

In particular, incidents involving plagiarism accusations are on the rise regarding master’s degree programs in Taiwan, with universities accused of acting as degree mills through programs that allow individuals to work and study at the same time. Master’s theses are often not sufficiently checked for plagiarism, despite the existence of a national centralized database of master’s theses at the National Central Library.

The phenomenon also gestures toward pressure facing students that need to work at the same time as they engage in graduate studies, as well as how some universities hand out degrees to politicians or other socially prominent individuals seeking to bolster their resumes. However, there will probably fail to be broader discussion of this social issue after the Lee controversy, with greater focus on partisan mudslinging between the pan-Blue and pan-Green camps instead.