HAD HISTORY NOT shaped the USA into the militarized colonial police state it is today, recent events might not have unfolded as they did. On the 25th of May, Memorial Day, the national holiday to honor and mourn American military martyrs, a devastatingly routine act of police brutality was captured on camera. Yet another cop murdered a Black man. George Floyd was pinned to the ground by Minneapolis police and suffocated under the weight of the knee pressed against his neck. Some of George Floyd’s last words echoed Eric Garner’s dying plea for mercy, “I can’t breathe”. 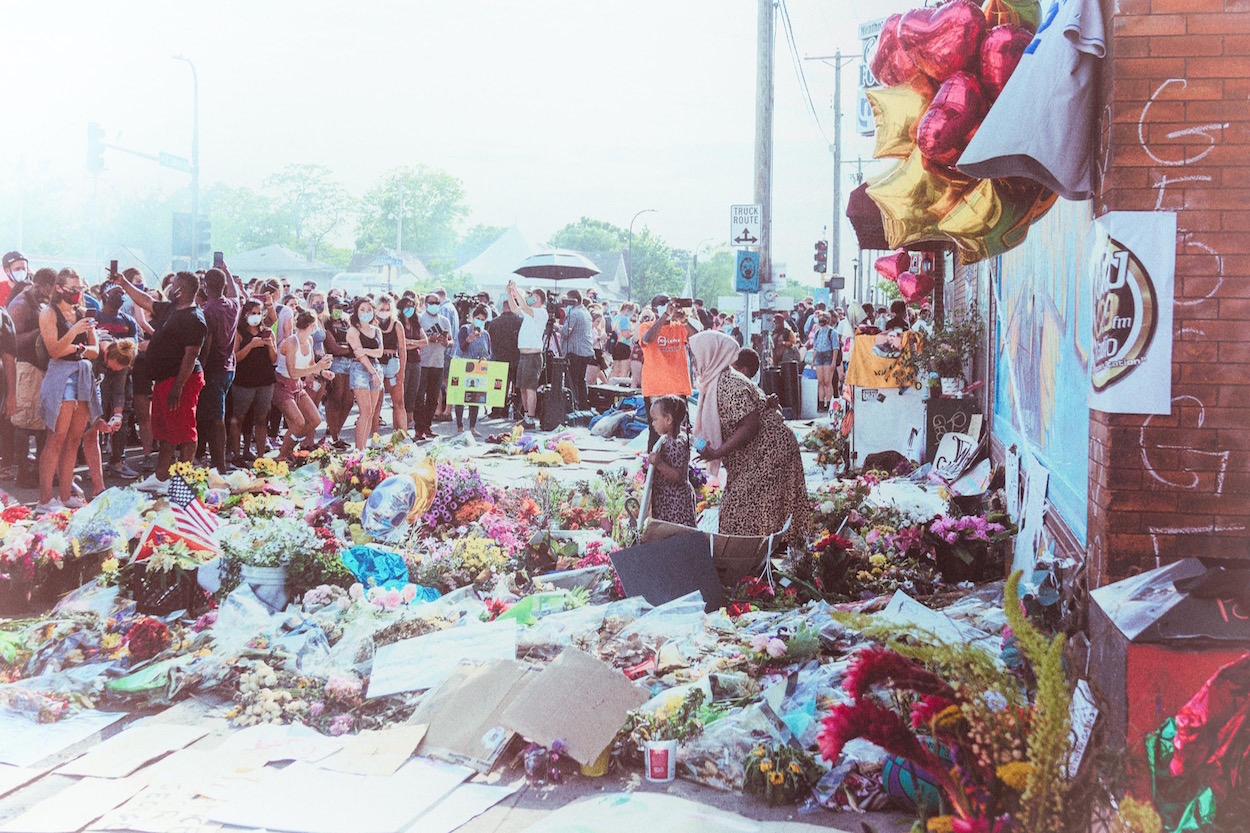 People gathered for a memorial service on Thursday, May 28th. The George Floyd mural, outside Cup Foods at Chicago Avenue South and East 38th St in Minneapolis, Minnesota, is the work of artists Xena Goldman, Cadex Herrera, and Greta McLain. The group started working on the mural on Thursday morning and finished it with the help of artists Niko Alexander and Pablo Hernandez. Photo credit: Lorie Shaull/CC

The fact that “Black Lives Matter” stands today as a primary rallying cry in the fight for racial justice in America reveals just how sick the nation is. Even with limited civil rights victories and increased representation in government, the disease has only spread via the prison-industrial complex and other institutional relations deeply entrenched in white supremacy and colonial violence. Andrea Jenkins, vice president of Minneapolis City Council and a Black trans activist, has called for racism to be declared a public health crisis.

Of course, Jenkins is not the only one to frame the issue in such rhetoric. The Metropolitan Urban Indian Directors group, a collaborative of American Indian organizations in the Twin Cities metro area of Minnesota, condemned the police killing thus:

“Without question, it was a complete failure of any form of moral decency or the most basic expressions of humanity by officers who have taken an oath to ‘serve and protect’. The eyes of the world are now upon us. How we come together to permanently rectify this situation and prevent it from happening again is now paramount. However, we must first acknowledge that this unspeakable act of evil is not new, that in fact it is a recurring problem suggestive of a deeper systemic sickness.”

All the egregious violations of human rights, the scourge of racist, colonial, and imperialist violence that has so defined the USA seems to have rotted down to the nation’s core. Yet the blood-stained strings tying together the American social fabric were already unraveling, of course, long before the current generation came of age on social media watching police brutality stream day after day. 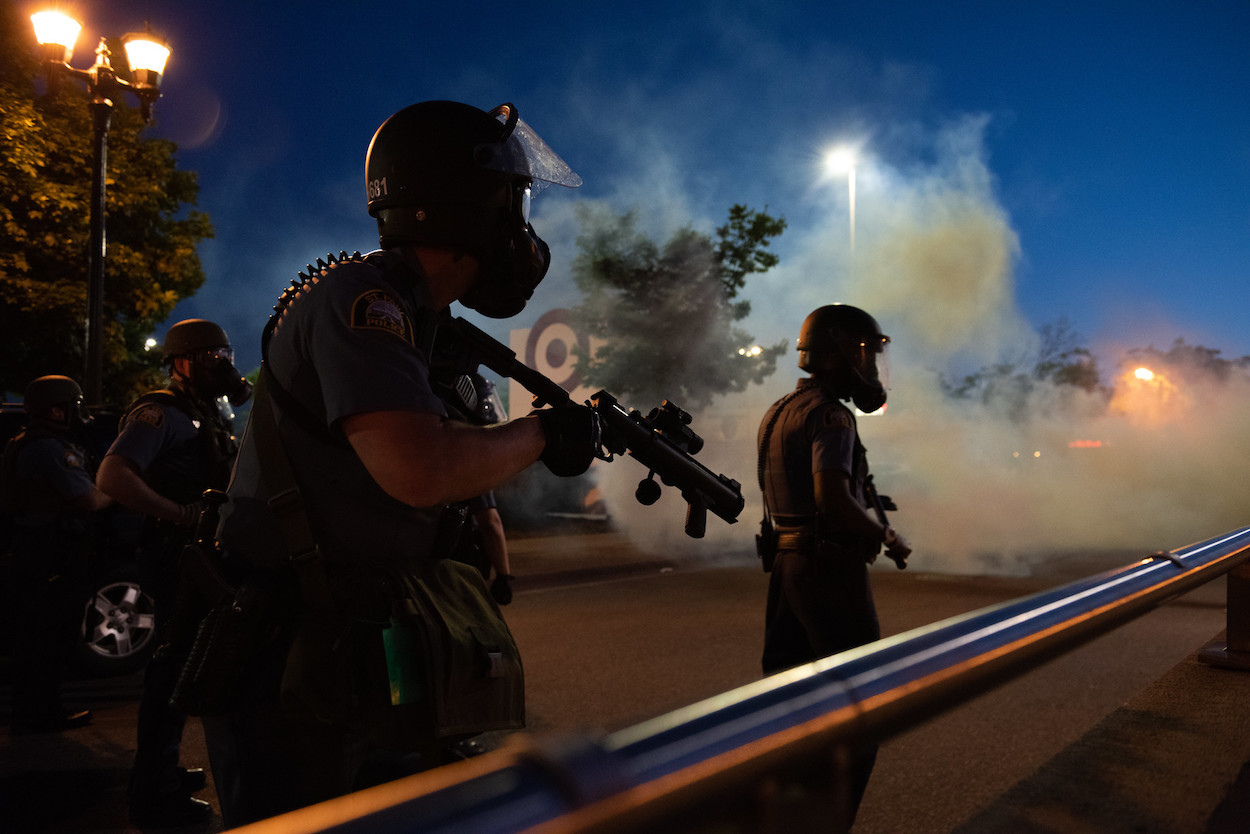 Leslie Redmond, president of the Minneapolis chapter of the NAACP, put it bluntly: “It reminds you of much of the history of lynching in America. And now we are just being lynched without the ropes.”

The first protests in the wake of George Floyd’s death were peaceful. Thousands gathered in Minneapolis on the 26th of May for one of the city’s largest anti-police brutality protests since the 1992 Rodney King demonstration.

But the current wave of protests soon escalated in a way that past actions had not. There are aggravating factors such as the COVID-19 pandemic, which has led to an economic crisis disproportionately affecting already marginalized people — while precarity looms around the corner for scores more. Then there are the elections coming soon.

In Minneapolis, anti-police brutality protests have made headlines for years, but hardly a sliver of justice has been seen. In 2015, Jamar Clark was killed by Minneapolis police, and the killer cops got off scot-free. In 2016, Philando Castile’s murder was live-streamed and prompted a national outcry, but as has come to be expected, the offending officer was later acquitted of all charges. However, when a white Australian woman, Justine Ruszczyk Damond, was killed by a black cop of Somali descent, the offending officer was sentenced, in 2019, to over twelve years in prison. Damond’s family was then awarded a settlement of US$20 million, of which they pledged US$2 million to the Fund for Safe Communities at the Minneapolis Foundation to prevent gun violence in the city.

This habitual miscarriage of justice is a fact which fuels the frustration behind the sentiment expressed by Redmond that “Black Minnesota is done dying, and white Minnesota is done hiding.” The time is well overdue for reconciliation, for reparations and reclamations, too. Now is the time to choose sides. 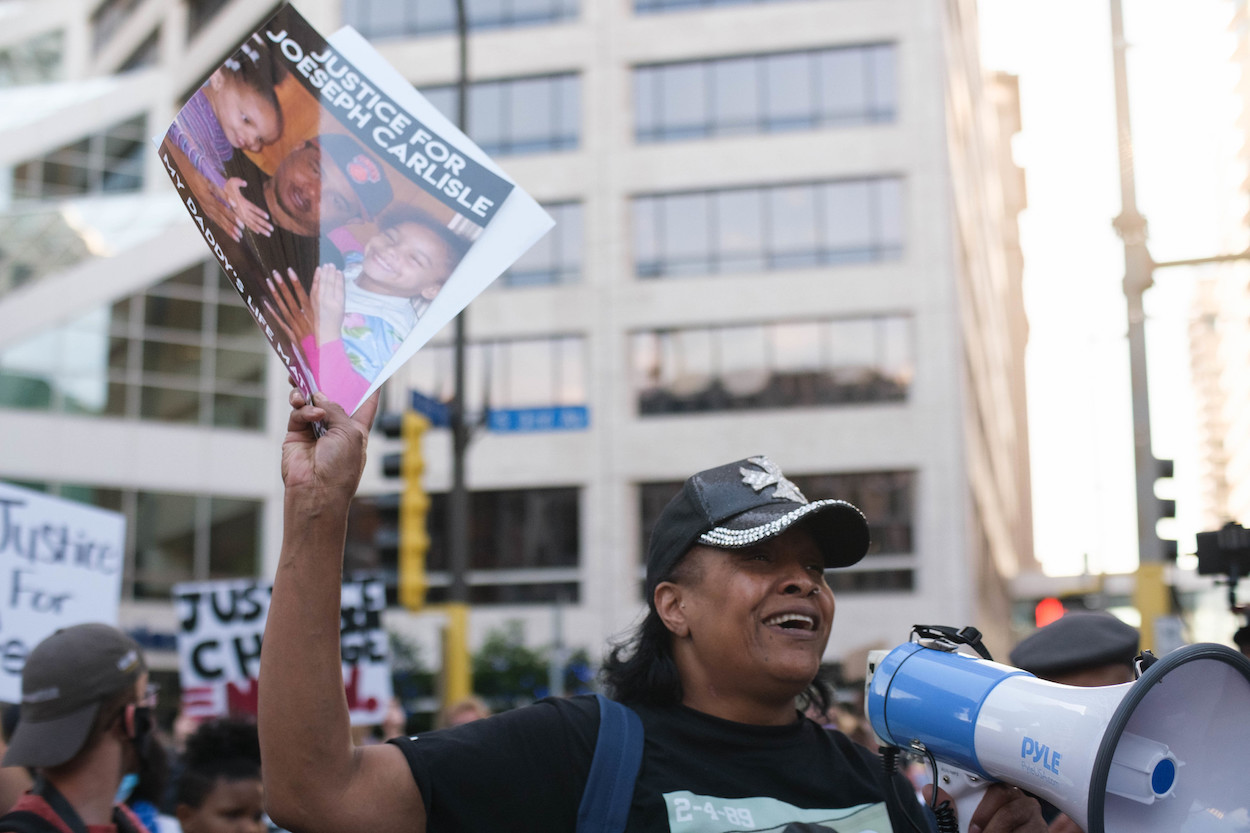 By the 27th of May, peaceful demonstrations unraveled into riots. Protestors seized the Minneapolis Police Department’s Third Precinct station and set it ablaze. It took less than a week to reach a fever pitch of intensity that had not been seen in the Twin Cities for decades. Over the weekend, the Minnesota government mobilized its National Guard in full force for the first time since World War II.

Many people were perturbed to see American military units swooping into their cities because even moderates know America’s global ’force for peace’ portends anything but. A large contingent of those troops, in Minnesota, had been training to support counterterrorism operations in the Horn of Africa. In the Twin Cities, part of their mandate was reportedly to “augment MN State Patrol civil disturbance operations with a show of force.” That is, to support the police using tear gas, flash-bang grenades, rubber bullets, and other riot control agents to beat back unruly bodies and quell the unrest.

Video soon surfaced of people being attacked on the doorsteps of their own homes. And while evidence mounts of undercover agents and other agent provocateurs adding to the chaos largely instigated by these militarized police forces, countless lives have been irrevocably affected by psychological trauma, arrests, injuries, and a rising death toll. As protests swept the nation, the dismay, damage, and disgrace have only compounded.

He may have been maligned for the comment, but Malcolm X’s remarks on the assassination of US president John F Kennedy disclosed a dark truth, which still holds water today as uprisings spread and fires rage across cities in the contiguous United States: “I think this is a prime example of the devil’s chickens coming back home to roost.” Just as in the 1960s, the current unrest stems from an oppressive climate of hate. And the accelerated escalation of violence, which is primarily violence sanctioned by the state, stems directly from the federally directed militarization of law enforcement agencies beginning under President Lyndon Johnson in the 1960s. 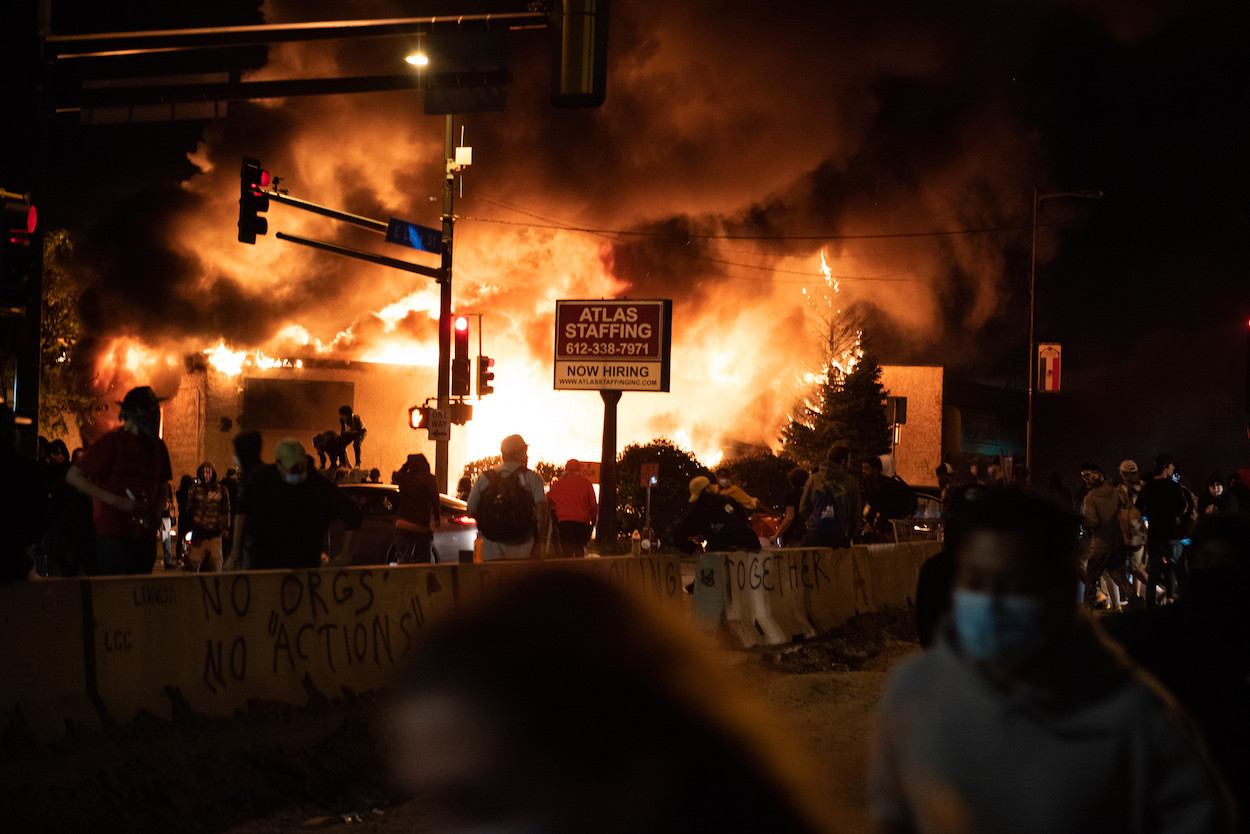 It is an open secret today that the American state is diseased. Its leaders are deranged, rarely if ever expressing any self-awareness of their role in history. And they have allowed their military and police nearly free rein to purvey violence across the globe, unaccountable to domestic and international law. The whole system is guilty as hell, as they say, and no amount of incremental reform can atone for the racism at the bedrock of the country’s colonial legacy. Anti-democratic at heart, and cynical to the core, the American Empire, it seems, has created the perfect storm for its own demise.