Statement by Tsai Ing-wen Is Vague at Best, at Worst Is Aimed at Cutting Ties With Hong Kong

TAIWANESE PRESIDENT Tsai Ing-wen took to Facebook yesterday night to issue a statement regarding the ongoing protests in Hong Kong. While Tsai expressed support of Hongkongers, it proves hasty to assume that Tsai was proposing any concrete measure to aid Hongkongers out of a sense of solidarity. In fact, if it proves to be more than a vague statement that Tsai has no real intention of acting on, Tsai’s statement could be interpreted as aimed at putting further distance between Taiwan and Hong Kong more than anything else.

While protests have rocked Hong Kong for the past year, concerns about political freedoms in Hong Kong have again been stoked by plans by China’s National People’s Congress (NPC) to circumvent the Hong Kong Legislative Council to pass security legislation aimed at criminalizing political dissent. Such actions by the NPC would be a significant blow to Hong Kong’s political autonomy under the framework of “One Country, Two Systems”. As such, one witnessed protests Sunday night on a scale not seen in months, seeing as protests have decreased in size and frequency after the start of the COVID-19 pandemic. With the COVID-19 situation in control in Hong Kong, protests are resuming again.

In particular, Tsai’s statement expressed support for those in Hong Kong that sought to defend their democratic freedoms, and stated that Taiwan was watching the ongoing events in Hong Kong closely. More concretely, Tsai stated that if the situation continued to deteriorate in Hong Kong, she would consider invoking Article 60 of the Mainland Affairs Council’s Laws and Regulations Regarding Hong Kong and Macao Affairs, the legal act regulating Taiwan’s relations with Hong Kong.

Article 60 is a measure of the Laws and Regulations Regarding Hong Kong and Macao Affairs which allows for the suspension of other articles of the act “should any change occur in the situation of Hong Kong or Macau such that the implementation of this Act endangers the security of the Taiwan Area.” Some have interpreted Tsai’s statement as that invoking Article 60 would be to provide assistance to Hongkongers through further measures, such as by providing them asylum in Taiwan.

At the same time, despite vowing support for Hongkongers in her statement, it may be hasty to assume that Tsai would invoke the act in such a manner as to provide any form of concrete assistance to Hongkongers.

Article 18 of the Laws and Regulations Regarding Hong Kong and Macao Affairs states that, “Necessary assistance shall be provided to Hong Kong or Macau Residents whose safety and liberty are immediately threatened for political reasons.” Suspending Article 60 may be with the aims of providing for measures such as those of Article 18. 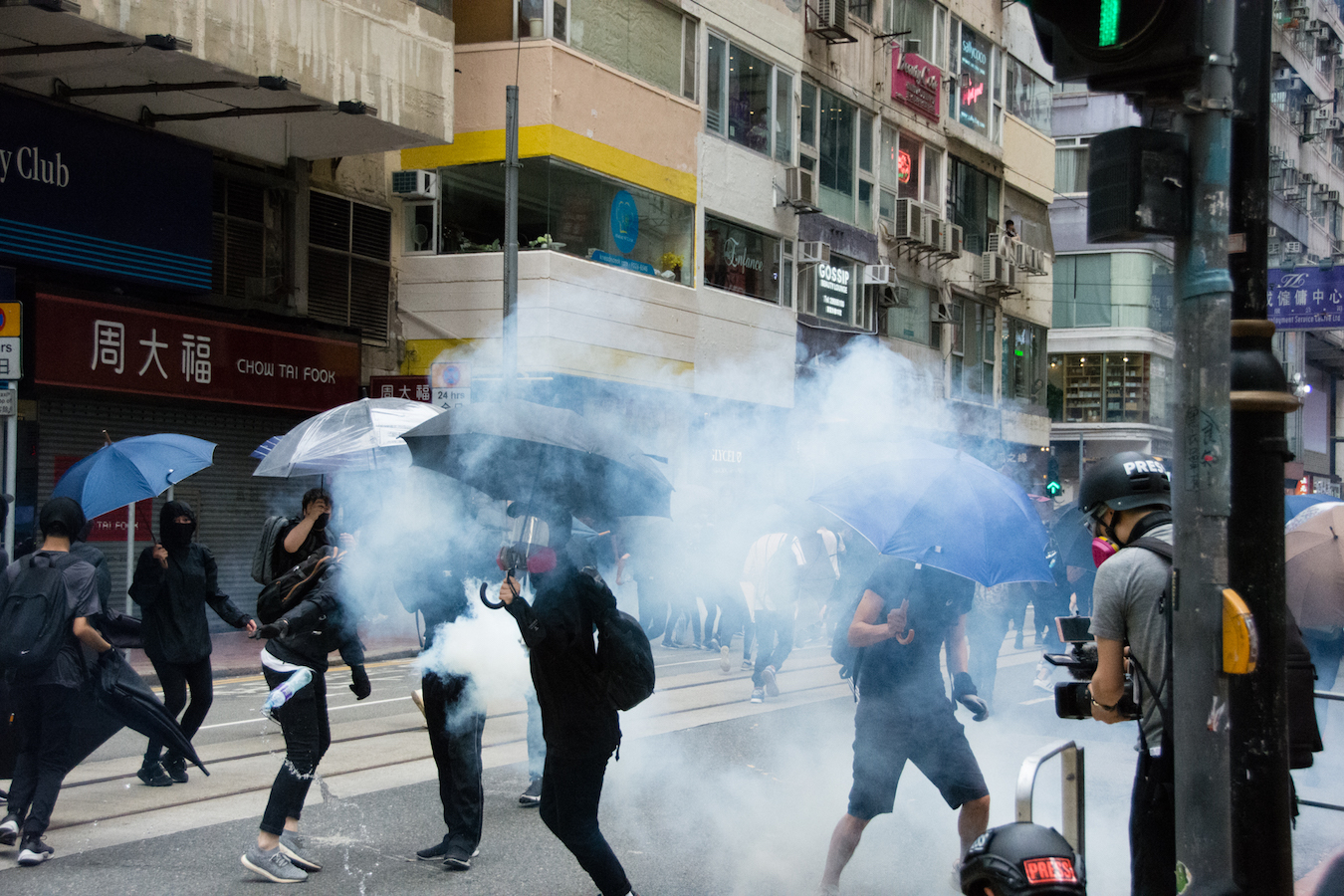 However, it was questioned throughout the past year of protests as to whether Tsai would invoke Article 18 of the Laws and Regulations Regarding Hong Kong and Macao Affairs to provide assistance to Hongkongers, such as taking measures to provide Hongkongers political asylum in Taiwan. The Tsai administration did not do so, nor did it take other measures in order to aid Hongkongers. Though over 5,000 Hongkongers were granted permits to reside in Taiwan last year, with an uptick in Hongkongers obtaining residency by investing in businesses, or pursuing higher education, the Tsai administration declined to establish an asylum application process for Hong Kong protesters seeking refuge in Taiwan.

It is unclear as to how many Hong Kong protesters sought asylum in Taiwan. However, the Tsai administration handled asylum cases on a month-by-month basis, with protesters often unsure as to whether they would continue to be allowed to stay in Taiwan more than another month. Protesters were kept in a state of limbo, seeing as they were unable to pursue higher education or take on employment with their temporary residency status. Some demonstrators that were in Taiwan were, in fact, not even high school graduates, making it unlikely that they would be able to obtain employment which required even just a high school diploma. And even as high-profile an individual as Lam Wing-kee, the only one of the Causeway Bay booksellers to remain free, faced difficulties securing residency in Taiwan.

Taiwan has no formal asylum laws, something that has been criticized by Taiwanese civil society groups for years. Taiwan also generally has a poor record with asylum seekers, as observed in cases where Chinese asylum seekers with demonstrable records of human rights activism were not granted asylum, sent back to China, and subsequently disappeared. In 2018 and 2019, two Chinese asylum seekers were marooned in Taoyuan International Airport for over one hundred days because the Tsai administration did not grant them entrance into Taiwan. Tsai’s Democratic Progressive Party previously proposed passing an asylum law in 2016, but this was voted down.

The Tsai administration was very likely hoping that Hongkongers seeking asylum in Taiwan would eventually decide to go back to Hong Kong on their own. Not being a pro-independence administration, the Tsai administration is, in fact, highly cautious when it comes to provoking the Chinese government regarding cross-strait relations and it may have feared that accepting Hong Kong refugees would be overly provocative of China. This occurs despite the fact that the Tsai administration referred to the Hong Kong protests frequently during 2020 election campaigning, raising the issue of Hong Kong as a way to attack the pro-unification KMT and, in this way, avoiding more concrete discussions of policy.

Though this is a rather strange fear, given the large number of Chinese already present in Taiwan in past years as tourists, students, or businessmen before the present COVID-19 pandemic led to the closure of borders with China, it is not surprising that anxieties regarding immigration flares up in Taiwan regarding asylum policy—something true of most nation-states. Hongkongers who have called on Taiwan to pass asylum laws have reported significant harassment from Taiwanese netizens in the past. Consequently, one notes that well-known Hong Kong activists such Joshua Wong have positioned themselves as grateful to the Taiwanese government regarding any policies it announces vis-a-vis Hong Kong, probably deliberately.

The New Power Party (NPP), one of the “Third Force” parties that emerged from the 2014 Sunflower Movement, recently called on the Tsai administration to live up to its frequent invocations of Hong Kong during 2020 elections by establishing mechanisms to aid Hongkongers. But this proposal saw heated criticisms by members of the pan-Green camp who saw the NPP’s phrasing of the statement as denigrating Taiwan’s sovereignty. This was because the NPP’s statement was read as implying that Taiwan had a moral obligation to concern itself with Hong Kong, something anathema to members of the pan-Green camp who see Taiwan as wholly independent of China and polities under its control, including Hong Kong. The NPP has also faced repeated accusations of being a turncoat in the pan-Green camp due to its initial hesitancy to endorse the Tsai administration in 2020 elections, a controversy that saw the departure of several legislators.

Though English-language commentators have seemed rather ignorantly unaware of a widely debated proposal, the Taiwan Statebuilding Party, another “Third Force” party which emerged from the Sunflower Movement, previously proposed allowing Hongkongers to serve in the Taiwanese military in return for citizenship. This proposal regarding military service was likely intended to allay concerns in Taiwan about the political loyalty of Hongkongers.

Former Sunflower Movement student leader Lin Fei-fan, who will stay on as the deputy secretary-general of the DPP into Tsai’s second term, has publicly called for action to be taken by the Tsai administration to aid Hongkongers.

Despite criticizing the Tsai administration’s cross-strait policies as though the deterioration in cross-strait relations with China during Tsai’s term were Tsai’s responsibility, rather than China’s, the pan-Blue-leaning Taiwan People’s Party (TPP) has also suggested that it would be in favor of passing legislation to aid Hongkongers. This is likely with the aim of trying to present itself as less overtly pro-China, seeing as the TPP tries to position itself as a party beyond partisan distinctions between the pan-Green and the pan-Blue camps, despite its legislators having primarily pan-Blue backgrounds, and it’s party leader, Taipei mayor Ko Wen-je, having positioned himself more closely with the pan-Blue camp in past years.

It is to be seen whether the idea of an asylum bill will be one that resonates broadly with Taiwanese. However, it would be premature to assume that Taiwanese would automatically be in support of asylum laws for Hongkongers.

And the specifics of what the Tsai administration intends to accomplish by suggesting it may invoke Article 60 of the Laws and Regulations Regarding Hong Kong and Macao Affairs are still unknown. 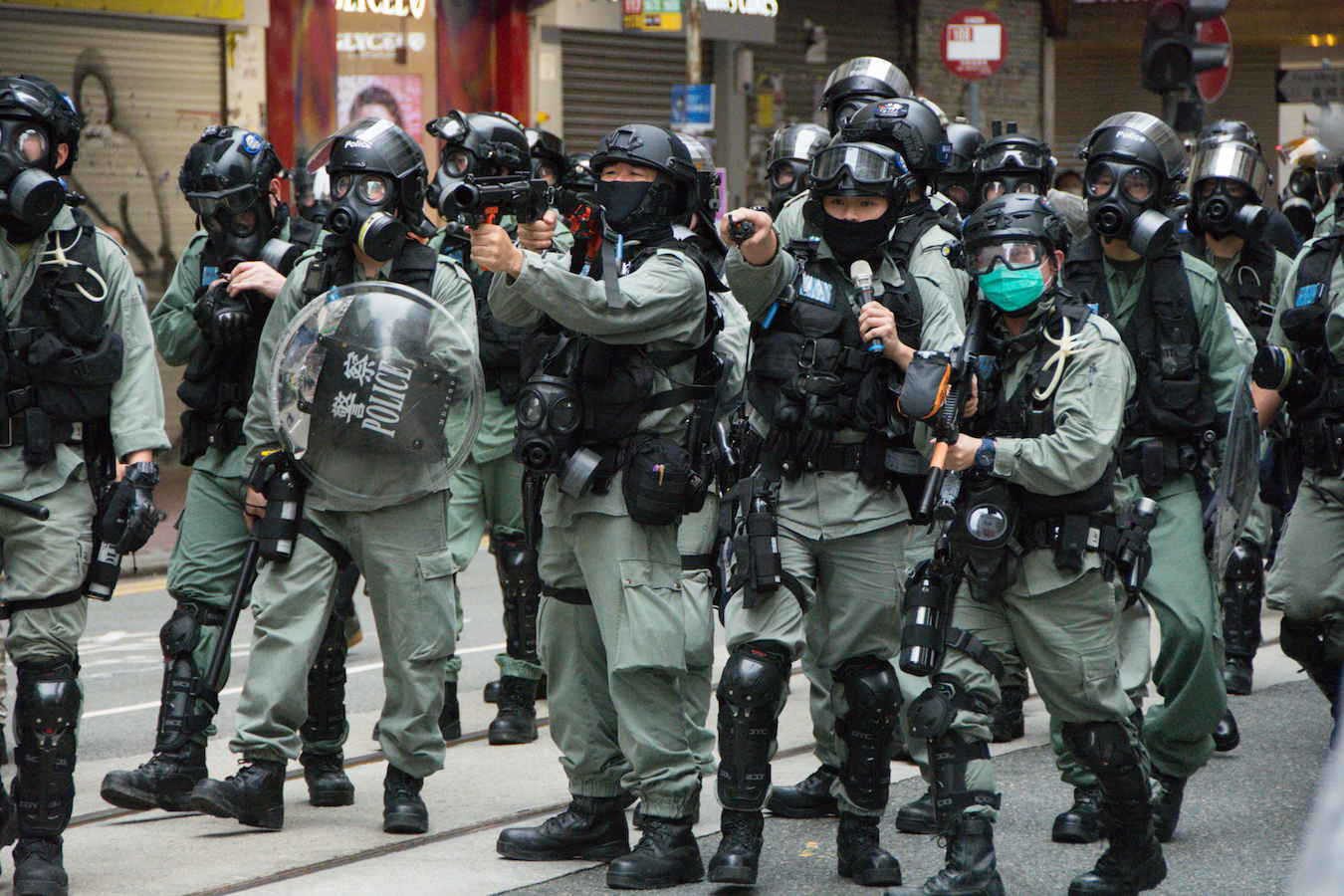 Chiang Min-yan, a spokesperson for the Taiwan Citizen Front—an NGO formed primarily out of civil society groups that had participated in the Sunflower Movement—and a former editor of the University of Hong Kong publication The Undergrad during his time as a Taiwanese student that went to college in Hong Kong, expressed similar concerns on Facebook. Chiang stated that he was unsure as to whether Tsai was implying that the Taiwanese government would take economic sanctions to threaten Chinese elites through her statement.

Moreover, in order to address backlash against the notion of providing Hongkongers with refuge in Taiwan, Chiang sought to frame providing asylum to Hongkongers in Taiwan as a measure against the Chinese government, stating that the while Taiwan “had no moral obligation” on the matter, the Chinese government feared an alliance of Hongkongers and Taiwanese against it. As phased by Chiang, this was why China had reacted so strongly against “foreign actors” purportedly backing protesters in Hong Kong in hoping to pass security legislation. 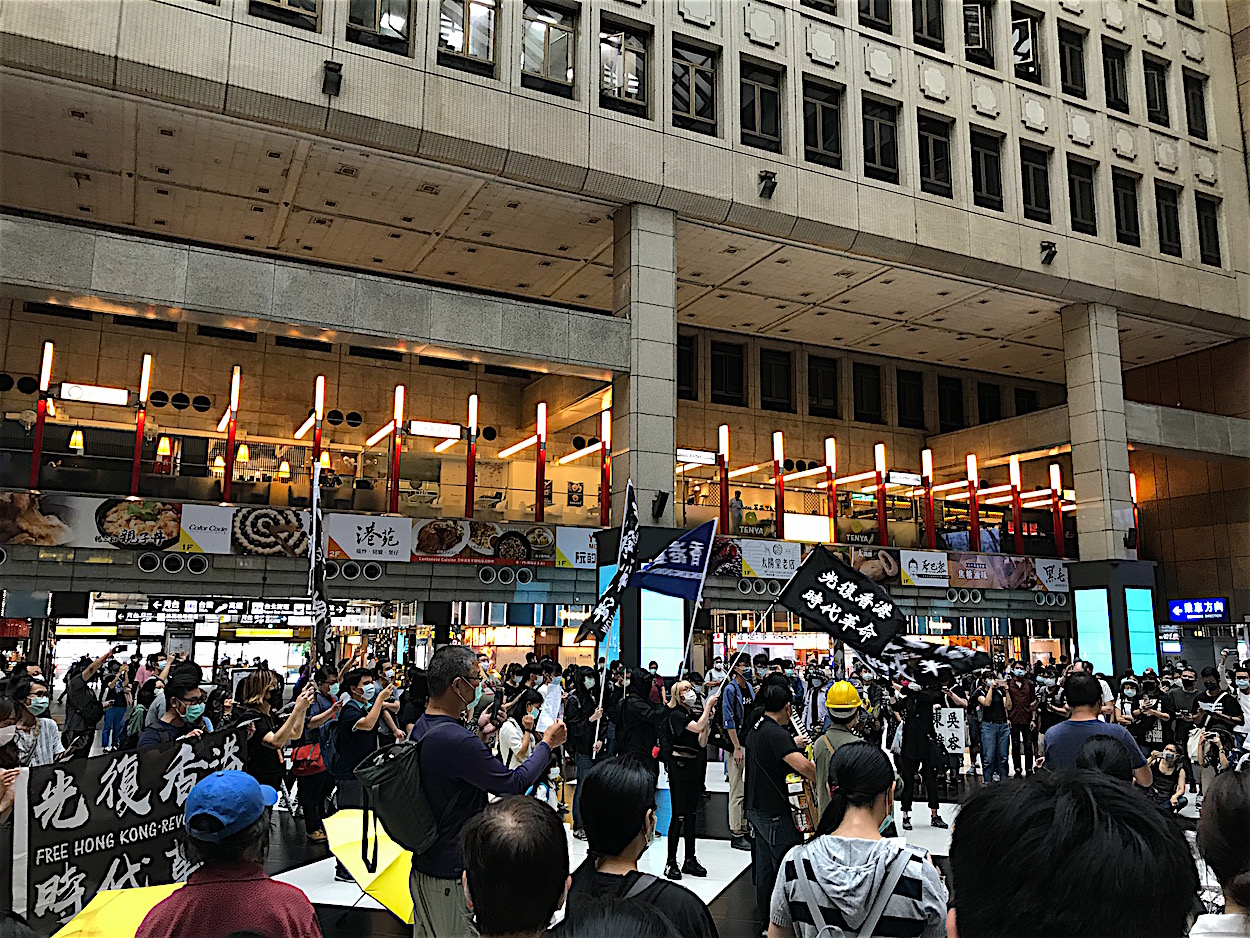 Solidarity between Taiwanese and Hongkongers remains strong, as observed in how a rally over the weekend originally aimed at addressing restrictions on public space that targeted southeast Asian migrant workers came to incorporate support for Hongkongers. Statements by Chen and Chiang are also reflective of the support of members of Taiwanese progressive civil society for Hongkongers.