ANGER HAS BROKEN out from migrant worker advocates after a case that involved an attempt to deport a Filipina migrant worker that posted videos critical of Philippine president Rodrigo Duterte by Philippine government officials in Taiwan.

The migrant worker in question, Elanel Egot Ordidor, posted videos critical of government measures taken under Duterte to combat the COVID-19 pandemic on Facebook. The videos criticized the Duterte administration, stating that insufficient measures had been taken to alleviate hunger for the poor during lockdowns of urban centers, and called on citizens of the Philippines to “not be too loyal” to Duterte. The videos were posted under the Facebook username Linn Silawan. Ordidor has worked in Taiwan for three years as a caregiver, currently working in Yunlin. 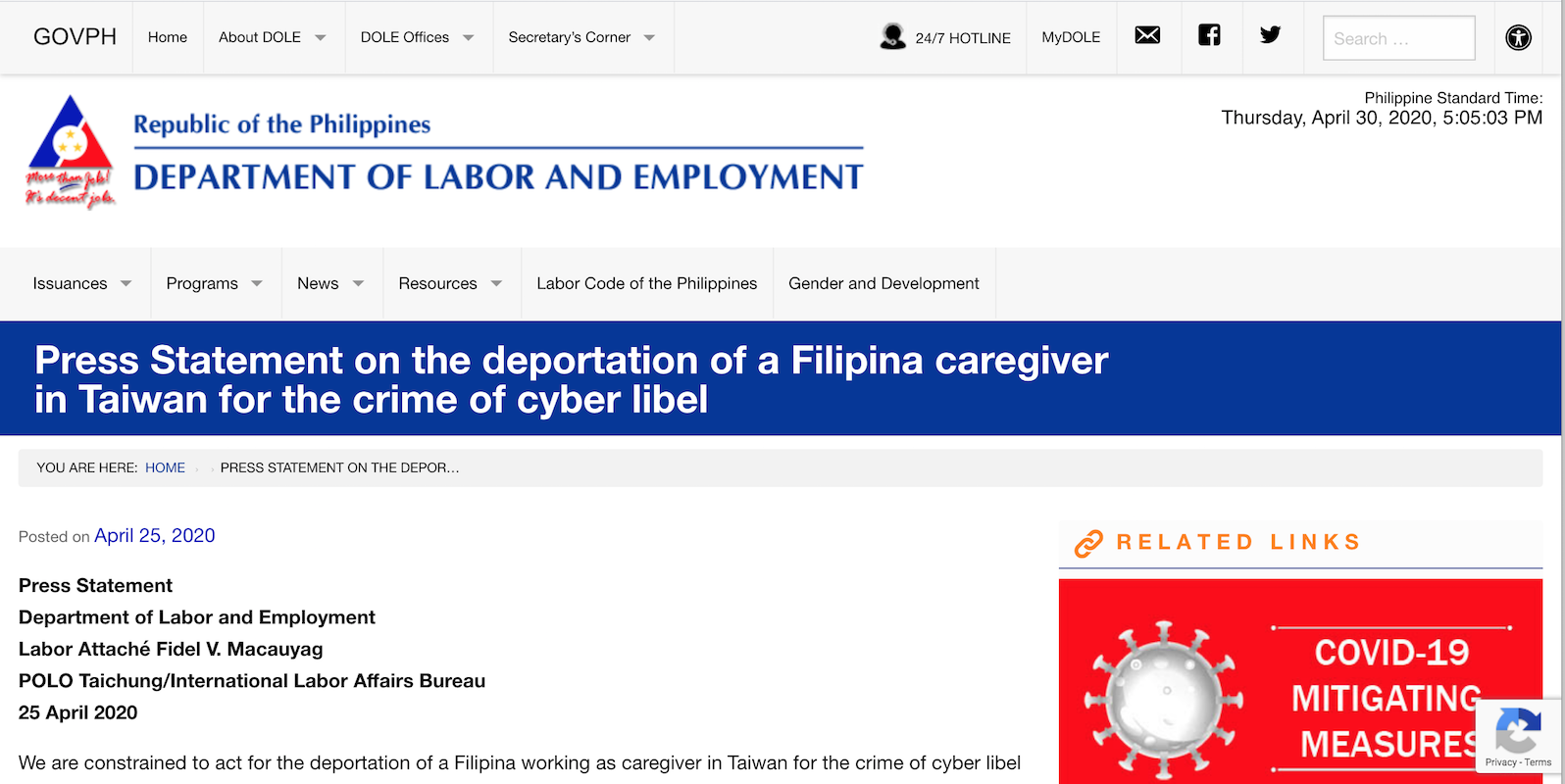 The Department of Labor and Employment press release in question

However, the videos led to backlash from the Philippine Department of Labor and Employment (DOLE), which accused Ordidor of libel against Duterte on its website in a press release, and claimed that Ordidor “intended to cause hatred” during the COVID-19 pandemic with her videos. The DOLE stated that Ordidor had been posting videos under a number of pseudonyms, including “Lenale Elanel Egot,” “Mha Lan Dee,” and “Hampas Lupa”.

According to Philippine Labor Attaché in Taichung Fidel Macauy, representatives of the Philippine Overseas Labor Office (POLO) in Taichung initially met with Ordidor and the broker agency that secured her employment in Taiwan to “to enlighten her that her actions amounted to a crime for which she might be prosecuted both in Taiwan and the Philippines.”

DOLE claimed that Ordidor had initially agreed to post an apology video retracting her earlier statements, but later did not do so, and that posts in support of Ordidor on Facebook by other migrant workers were from “fake accounts”, as a result of which it would go ahead with the deportation. The deportation would be carried out in coordination with the Philippine Overseas Labor Office (POLO) in Taichung, under the auspices of Ordidor violating Republic Act 10175.

Efforts to deport Ordidor to the Philippines come at the same time as a series of arrests that seem to be aimed at targeting online critics of Duterte, with the claim that they are seeking to spread disinformation in the midst of the COVID-19 pandemic in order to create chaos. The Duterte administration has seen the political targeting of dissidents during its tenure, including the extrajudicial killings of government critics under the auspices of fighting drug trafficking. The Duterte administration has been accused of abusing emergency powers used to fight COVID-19. The Ordidor case proves unusual because of its targeting of an overseas migrant worker, however. 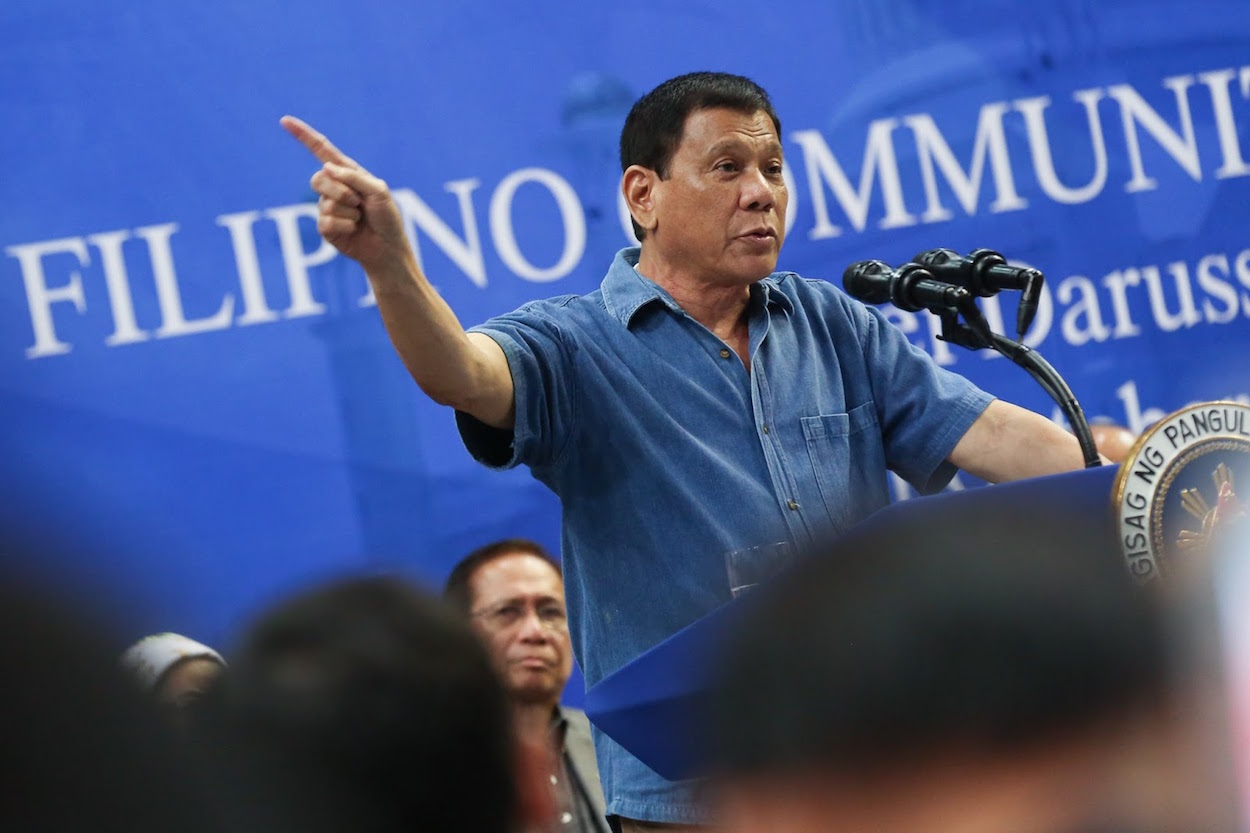 Taiwanese civil society groups that work on human rights and migrant workers’ issues were quick to act on the issue. Lennon Ying-Dah Wong, the director of the Taoyuan-based Serve the People Association, a migrant worker aide center, took to social media to alert civil society groups that Ordidor had been taken away by her broker agency. This led Chiu Eeling, the executive director of Amnesty International Taiwan, to contact Legal Aid Foundation lawyers to intervene. The result was that Ordidor’s deportation was halted and that her employer has stated that they will continue to maintain her contract. Migrant worker advocacy group Migrante Internationale has also condemned actions aimed at deporting Ordidor.

Nevertheless, the response from Philippine government officials has been to disavow the incident. Manila Economic and Cultural Office Chairman and Resident Representative Angelito Banayo claimed that he had not received any instructions from the central government calling for Ordidor’s deportation, with no orders coming through official channels, though he stated that he would have complied with such instructions if he had received them.

Banayo stated that attempts to deport Ordidor were unilateral actions by POLO in Taichung and that Ordidor had not broken any laws of the Philippines or Taiwan. Philippine Senate Minority Leader Franklin Drilon has called on Secretary of Labor Silvestre Bello III to recall Fidel Macauy from his position as Philippine Labor Attaché, claiming that Macauy overstepped his bounds.

Roque’s comments later struck a nerve after claiming that the decision about whether to deport Ordidor or not would be up to “Taiwan and China,” causing Taiwanese diplomatic officials to lodge an official protest over the matter. But, either way, Roque’s comments could be read as attempting to pressure the Taiwanese government to deport Ordidor for the sake of maintaining diplomatic relations with the Philippines, while relieving the government of the Philippines of any controversy that would be caused through trying to deport Ordidor. 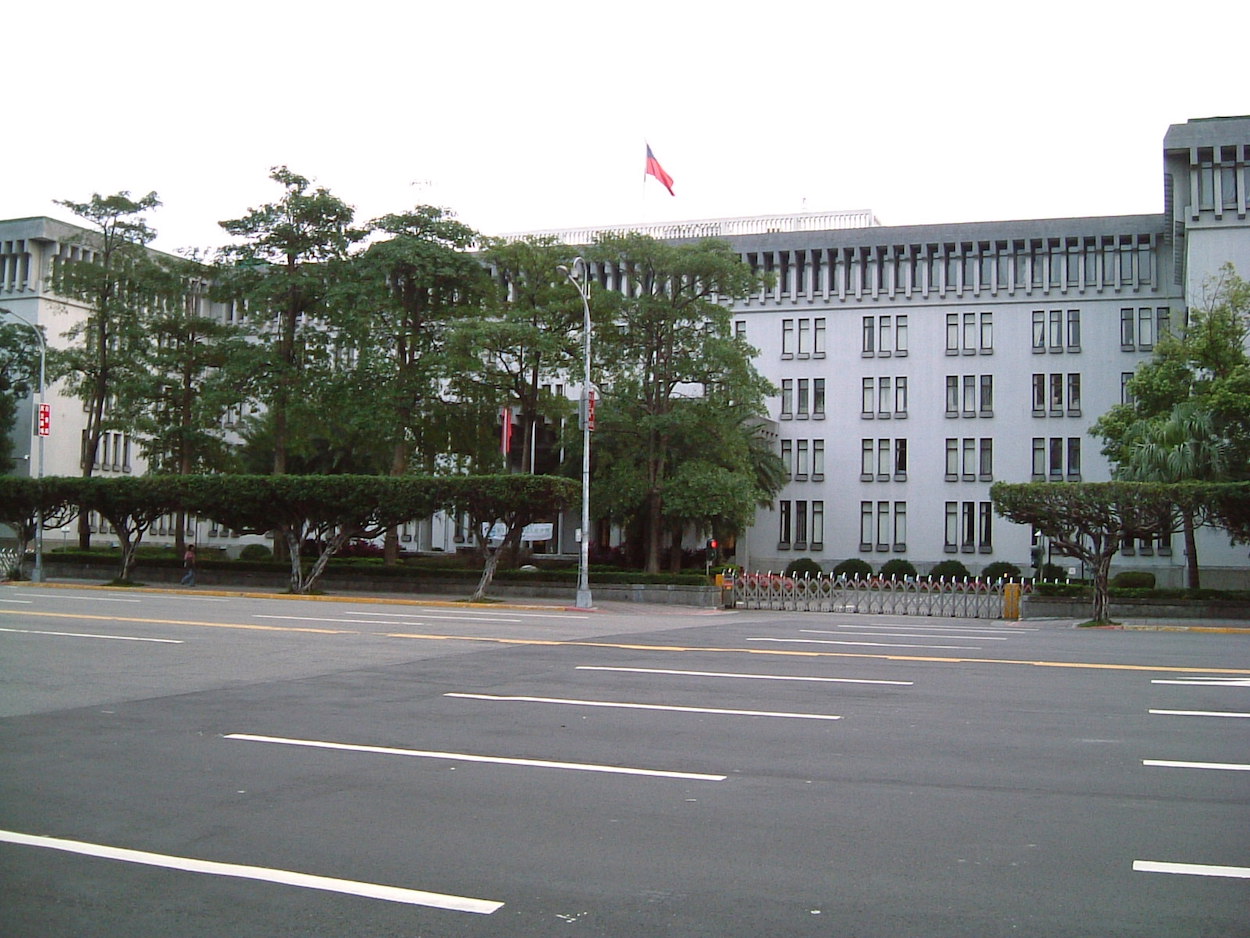 Taiwanese government officials such as Minister of Foreign Affairs Joseph Wu stated that if the government of the Philippines wished to take action against Ordidor for breaking laws, it could do so through diplomatic channels by requesting judicial cooperation. At the same time, the Taiwanese Ministry of Foreign Affairs (MOFA) has stated that migrant workers enjoy the same freedoms of speech in Taiwan as Taiwanese and that other countries should respect this.

That being said, it would hardly be unheard of for MOFA to turn a blind eye to or even be complicit in human rights abuses by authoritarian countries for the sake of maintaining diplomatic relations with them. The free speech rights of migrant workers in Taiwan are also far more precarious and enjoy fewer protections than Taiwanese citizens, with the possibility of retaliation against migrant workers from their employers or from representatives of their governments in Taiwan.

The Yunlin County police have stated that it will increase patrols near where Ordidor lives and works because of the possibility that she will face harassment for her online videos. It is possible that efforts by broker agencies or Philippine government officials to deport Ordidor will continue. It is also not impossible that other Filipino migrant workers in Taiwan will be targeted for political criticisms of the Duterte administration going forward.

For her part, Ordidor states that she fears facing retaliation if she returns to the Philippines. Consequently, it is not impossible that she will continue to face threats going forward, something that could become an issue near the end of her employment, or if her employer eventually decides to terminate her contract. This remains to be seen.