IT IS NOT uncommon for last-minute scandals to break shortly before elections take place in Taiwan. Australian newspaper The Age reported yesterday that Alex Tsai of the KMT attempted to force accused Chinese spy Wang Liqiang to recant his claims that he assisted in Chinese infiltration efforts aimed at influencing the Taiwanese elections.

Wang was reportedly approached by both Tsai and a Chinese businessman surnamed Sun. Wang was to not only state in a video that he had made up these claims, but that he had been paid by the DPP to do so. As Wang is currently seeking asylum in Australia, according to Tsai and Sun, if Wang complied with their demands, the KMT would allow Wang to remain in Taiwan or return to China. On the other hand, if Wang refused to comply, he would be sent back to China and killed or threatened in Australia. According to the article, Tsai sent a picture of himself meeting with Chinese president Xi Jinping as a way to pressure Wang. 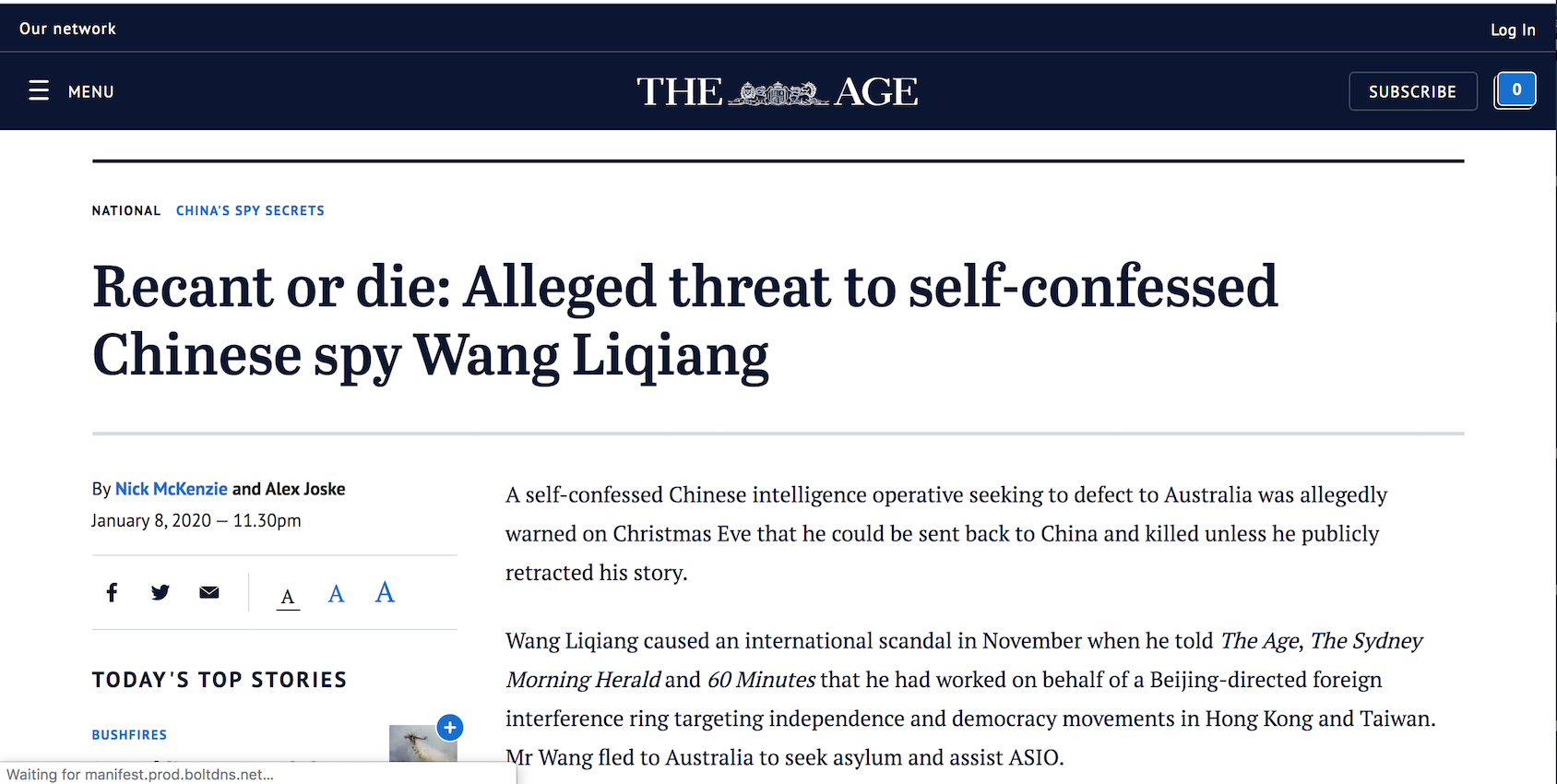 In the wake of the report, Tsai held a press conference this morning where he played two recordings, purporting to disprove the report’s claims. Chiu Yi of the New Party, previously one of the KMT’s most infamously pro-China legislators, was also present at this press conference.

The first recording was of an interview between Sun and Alex Joske, one of the two journalists that broke the case, in which Sun claims that Wang was paid by the DPP. The second recording was of a phone call between Tsai himself and Wang, in which Tsai asks Wang to discuss the details of the DPP paying him to make false claims. However, before Wang responds, the phone call cuts off due to a poor connection, and there was no further recording.

As the central detail of Wang actually stating that he was paid by the DPP is missing and all Wang was able to provide otherwise was an audio recording of Sun insisting that Wang was lying and part of a phone call between himself and Wang, it is unknown what Tsai was attempting to prove exactly. Tsai also made the claim that the message shown in the article was not typed by him because it was written in simplified and claimed that he didn’t know how to write in simplified, a somewhat strange defense.

By contrast, the press conference seems to make it all the more probable that the allegations against Tsai are true. Alex Tsai, a former legislator and the current deputy secretary-general of the KMT, has a notorious reputation even among KMT politicians. Tsai is among the loudest voices in the KMT who have accused the DPP of launching a “Green Terror” and that have militated against the Tsai administration for what the KMT claims are attempts to remove the symbols of the ROC. In the past, Tsai aligned himself with former KMT presidential candidate and party chair Hung Hsiu-chu’s calls for immediate unification between Taiwan and China. Likewise, Tsai infamously drove several kilometers with a protestor trapped on the windshield of his car during the Sunflower Movement in 2014, though no fatalities occurred.

Tsai is thought have substantial wealth as a result of retaining some of the KMT’s illicit party assets, as a result of which he was arrested in 2017 on charges of corruption. Tsai announced in 2017 that he had been named chair of the Jiangsu Min’ An Automotive Company and would subsequently be moving to China and withdrawing from politics; though he did not follow through with this, this seems to suggest ties between Tsai and Chinese businesses. 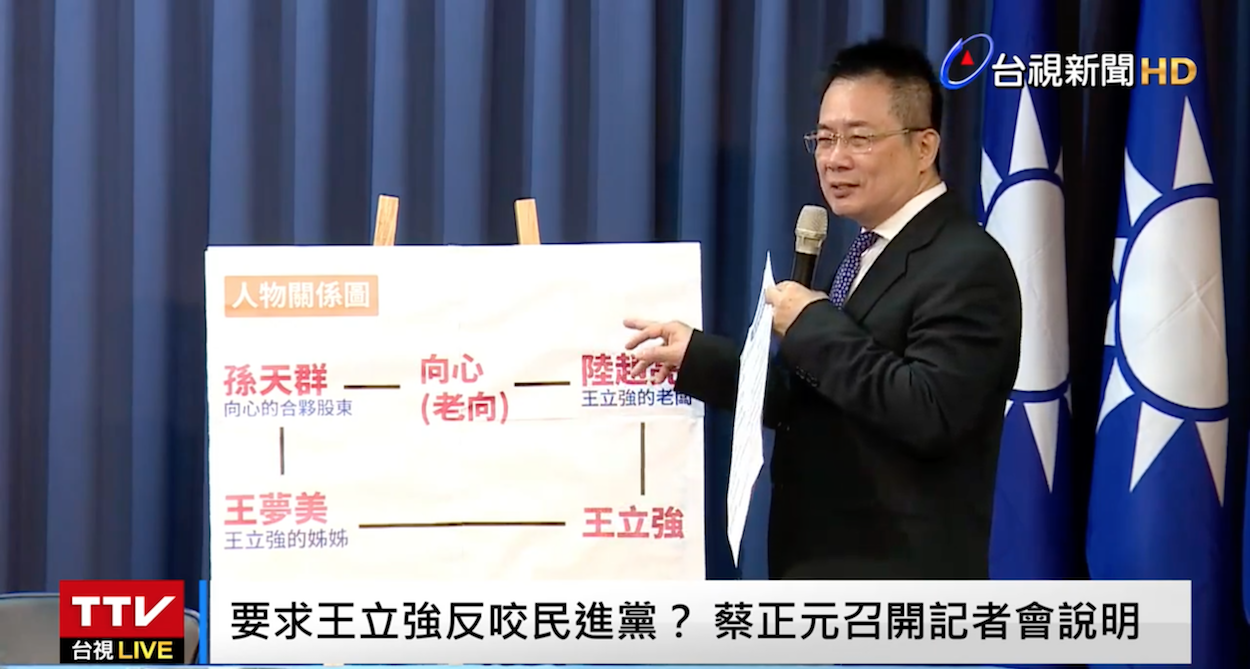 Tsai is frequently thought to have direct ties with the Chinese party-state. After the kidnapping of Taiwanese human rights activist Lee Ming-che, his wife, Lee Ching-yu, was approached by a man claiming to be acting as an intermediary for the Chinese government. This man was Lee Chun-Min, a Taiwanese man previously imprisoned in China for decades for spying, and once an aide of Alex Tsai. Though he proved evasive on the issue, Tsai confirmed in public statements that he had reached out to acquaintances in China to try and address the situation regarding Lee’s detention, suggesting that Tsai may have been involved in the case.

As such, it would not surprise if Tsai was involved in attempts to threaten Wang Liqiang. Further details of the case are likely forthcoming, but the incident will likely become a major talking point between both the pan-Green and pan-Blue camps going forward in the two days before the election.