The “Service Generation” of Taiwanese Politics: An Interview with Hsieh Pei-fen

New Bloom interviewed Hsieh Pei-fen (謝佩芬), legislative candidate for the DPP in Taipei City District 6, on November 28th. Hsieh previously worked as a diplomat at the Permanent Mission of Tuvalu to the United Nations and in the National Security Council.

Brian Hioe:  First, could you introduce yourself for readers who might not know you?

Hsieh Pei-fen:  I’m 32 years old this year. Age is never a secret in Taiwanese elections, you have to say this right away in an interview. [Laughs]

I’m running for legislator in Daan. My specialties are in law and diplomacy. I studied in Taiwan up until college, graduating with degrees in law and politics from National Taiwan University. After I graduated, I went to the Harvard Law School in America for an MA. 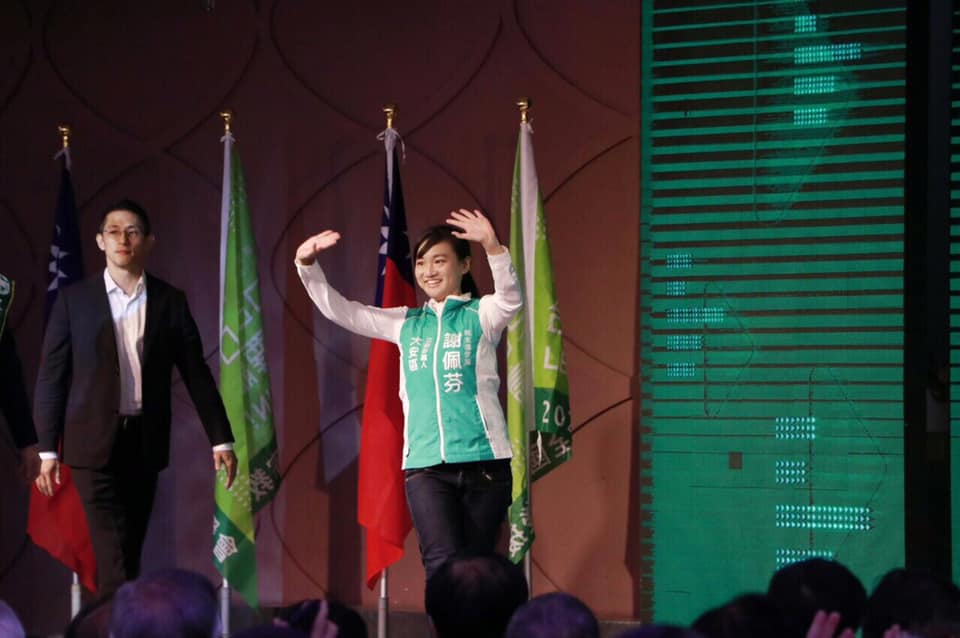 Later on, I worked at the UN. I worked as a diplomat for three years, as part of the Permanent Mission of Tuvalu to the United Nations. Then after that, I went to the Harvard University Kennedy School for an MA in Public Policy. When I returned to Taiwan, I worked as an assistant in the National Security Council.

This is a brief introduction of my life history. What I’ve done or studied in the past primarily has to do with public policy, particularly regarding law and diplomacy.

BH:  Why did you decide to run for elections?

HPF:  From when I was in college, I was always very interested in public policy. You can see this in my history. I also participated in foreign affairs in student groups in college, which had to do with Taiwanese social, political, and historical issues. I got to know many friends that way.

Later on, some friends went to work in the government, in the DPP, or in other pro-local parties or organizations. In college, I participated in the 915 March to call for Taiwan being admitted to the UN, which also points to my interest in promoting Taiwan internationally. In college, I also participated in the Formosa Foundation’s Ambassador Program, to lobby American political representatives and to try and convince them to support Taiwan, as well as the Strait Talks Symposium, in which five youth representatives from Taiwan, America, and China met to discuss Taiwan’s future.

After I went to America, I studied and then worked in the UN. But when I had free time, I would work on activities to promote outreach for Taiwan, such as talking about Taiwan’s situation to bystanders on the street. I also participated in FAPA’s Young Professional’s Group as a steering committee member and organized some events, including lobbying. 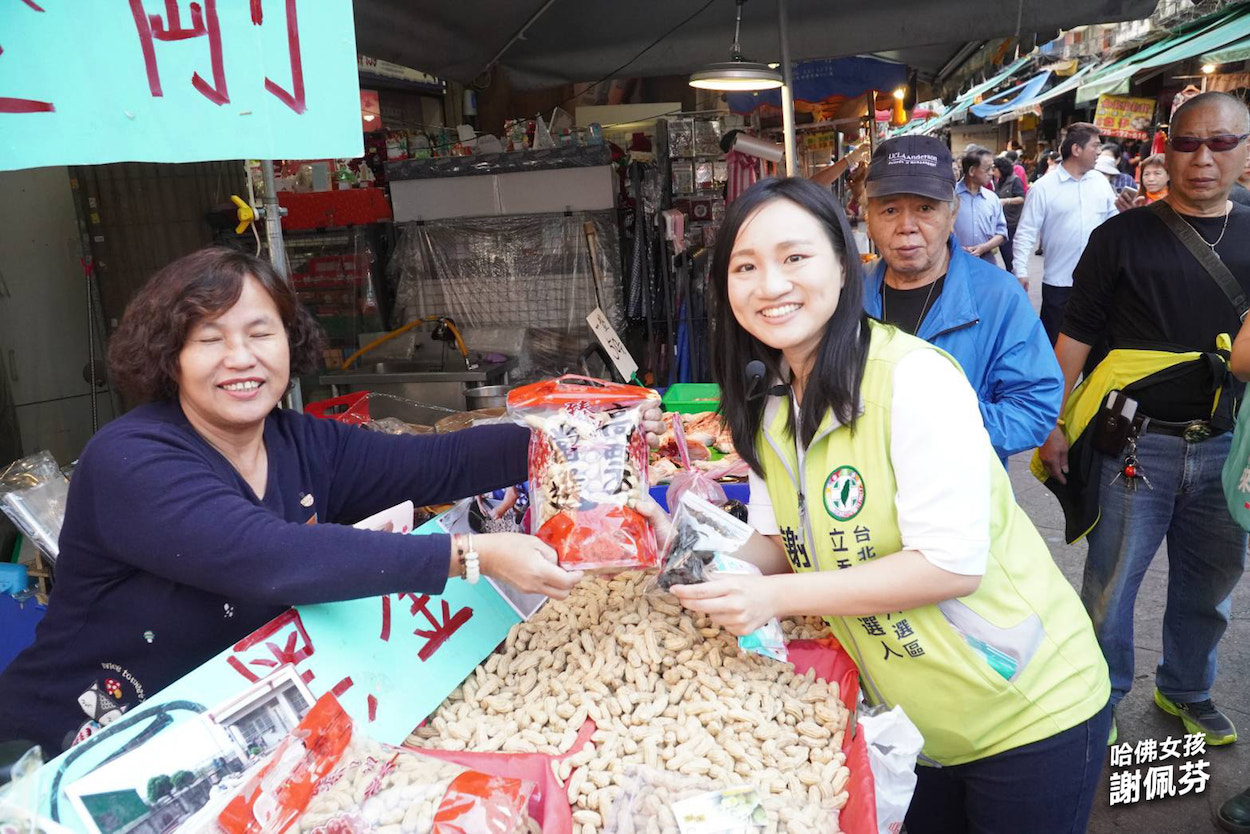 After returning to Taiwan, I entered the Presidential Office and began to work at the National Security Council. When I had free time, I would write articles that had to do with policy. I also became part of the New Frontiers Foundation think tank, a think tank close to the DPP, as part of their law and politics working group.

The reason I decided to run this year is that 2020 is a very important year. We can see the situation in Hong Kong currently, which shows us what the results of One Country, Two Systems would be. It was claimed that Hong Kong people would rule Hong Kong and that the system of government in Hong Kong would remain unchanged for fifty years. This is already a broken promise.

The DPP is very focused on young people this time, promoting their Taiwan Faction youth alliance and running young candidates in their twenties and thirties, hoping to resist China and protect Taiwanese freedom and democracy. The DPP party central looked me up, telling me what their thoughts were. I felt that I agreed with this strongly, since despite having worked in this field for so long, I wasn’t at the frontline. So I decided to run as legislator for Daan.

BH: What do you think is particularly important about this election? You already raised Hong Kong, but are there key domestic issues as well?

HPF: I think that the China issue is always the most important issue in Taiwanese elections. It’s important again this time because of Hong Kong. In the past, we felt that Beijing would likely maintain One Country, Two Systems, because it knew that Taiwan was watching. But now we really have seen Hong Kong and how One Country, Two Systems has made the streets of Hong Kong resemble a war zone. You wouldn’t even recognize the pictures as Hong Kong.

Many people have disappeared and may have been kidnapped. That a teenager was possibly gang-raped by the Hong Kong police, or that a dead body would be found in the harbor, it sounds unbelievable, but it sounds like the White Terror period in Taiwan.

But there are also many older houses in Daan. How can we renovate them to allow the residents of Daan to have a safer living environment? This is something I hope to push for. Likewise, I hope to increase social subsidies to allow more people to use them, and to allow for renovations of older, more dangerous houses, and to protect the rights of residents. This is something I believe to be very important not only for Daan, but domestically as a whole. 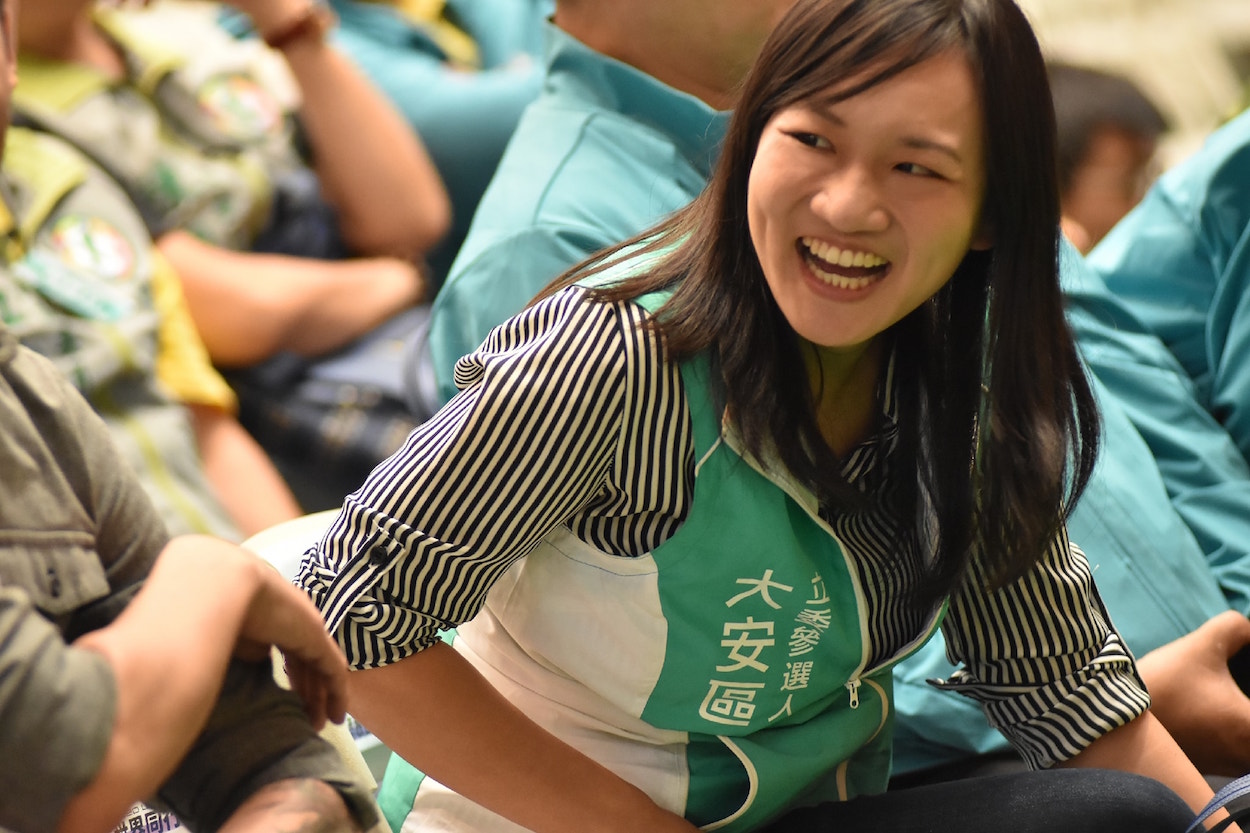 BH: The DPP is running a number of young candidates this time, is collaborating with the Taiwan Statebuilding Party, and the NPP is in crisis at the same time. Do you think that this reflects the growing participation of young people in Taiwanese politics?

The candidates that the DPP is running this time, including me, are new to politics and are young people. They’re more focused on values. They might have been working on other things before. For example, I could have become a lawyer or a judge after graduating. But I decided to do this on my own, to participate in public affairs and focus on policy, because of my belief in certain ideals. I believe that this is a trend.

I referred to ours as a “Service Generation” in the press conference where I announced I would be running because the DPP has passed through several generations. The first was marked by the Kaohsiung Incident, those of that generation who fought for democratic freedoms, such as Chen Chu and others. The second generation was the “Defense Lawyer Generation,” which consisted of the defense lawyers for those involved in the Kaohsiung Incident, such as Chen Shui-bian, Frank Hsieh, Su Tseng-chang, and others.

After that, there was the “Student Movement Generation,” consisting of people that entered the DPP after participating in student movements, such as Luo Wen-jia. There were assistants as well, who rose to become politicians after acting as legislative assistants.

For the newer wave of political candidates, I refer to this as the “Service Generation” because this primarily consists of people who identify with Taiwan and see their country as Taiwan: the so-called “Natural Independence Generation”. We grew up here and our sense of identification here is stronger than with anywhere else.

Even if we might have traveled to the international world, like how I went to the UN, I couldn’t forget about Taiwan, and I hoped to use my professional expertise to return to Taiwan as a frontline worker.

I think that this is definitely a trend among many Taiwanese young people. 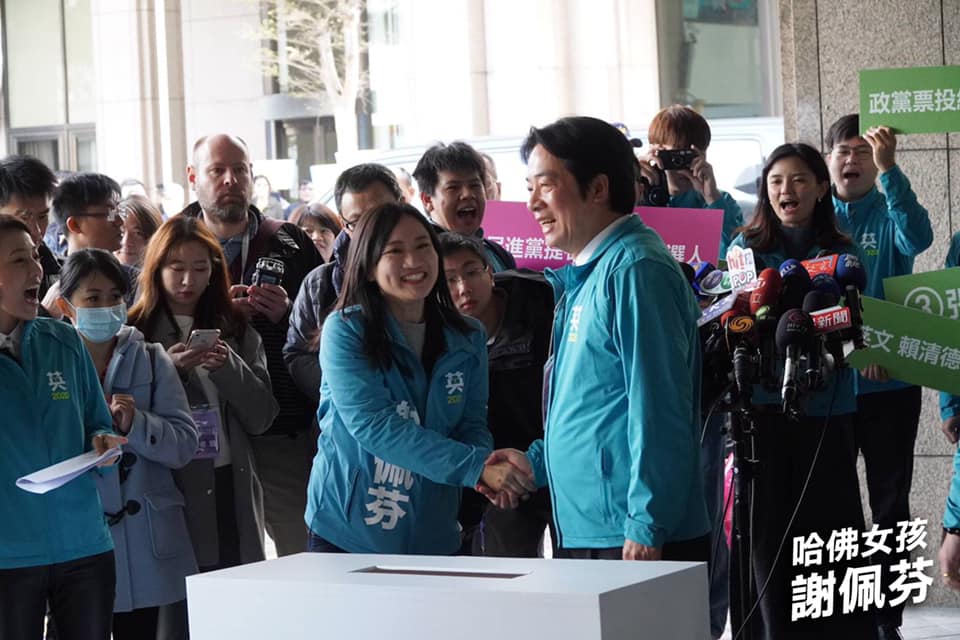 HPF:  I think it’s definitely linked. Taiwan is linked to the international world in various aspects, in terms of both society and politics.

Like we were discussing Hong Kong earlier, it’s mostly young people who are active now. We can see that with social and political movements: It’s always young people in the frontlines. Because when all is said and done, this country will become young people. In the future, it will be us young people, so we have to stand up and fight for our rights, to speak up for ourselves, to tell the world what we want this nation to be like. I believe this is a global trend, and I identify with this trend myself.

BH:  What would you have to say, in closing, to readers, both Taiwanese and international?

HPF:  I was in America for six years. I grew up in Taiwan up until I graduated from college, then went to America. In these six years, I spent three years studying and three working. Then I returned to Taiwan.

Because of my work, I got to know people from places across the world, whether this was my classmates from Harvard or my co-workers in the UN. After going around the world, I’ve come to feel that Taiwan’s international influence is actually quite strong, that we don’t lose to any of these people from internationally prestigious schools.

I believe that we Taiwanese need to be more confident in ourselves. To give an example, when introducing Taiwan to people from other countries, Taiwanese will often say, “I’m from Taiwan. Have you ever heard of Taiwan?”

But I believe that many people have already heard of Taiwan. One notes that a Korean person usually won’t say, “I’m from Korea. Have you ever heard of Korea?”

I believe that we have to be confident in ourselves first if we want others to believe in us. We are a leader in terms of democracy, in both Asia and the wider world. Our economy is around the twentieth largest in the world. The size of our country is similar to many European countries, and our population is around that of Australia. There’s no need for us to feel interior. 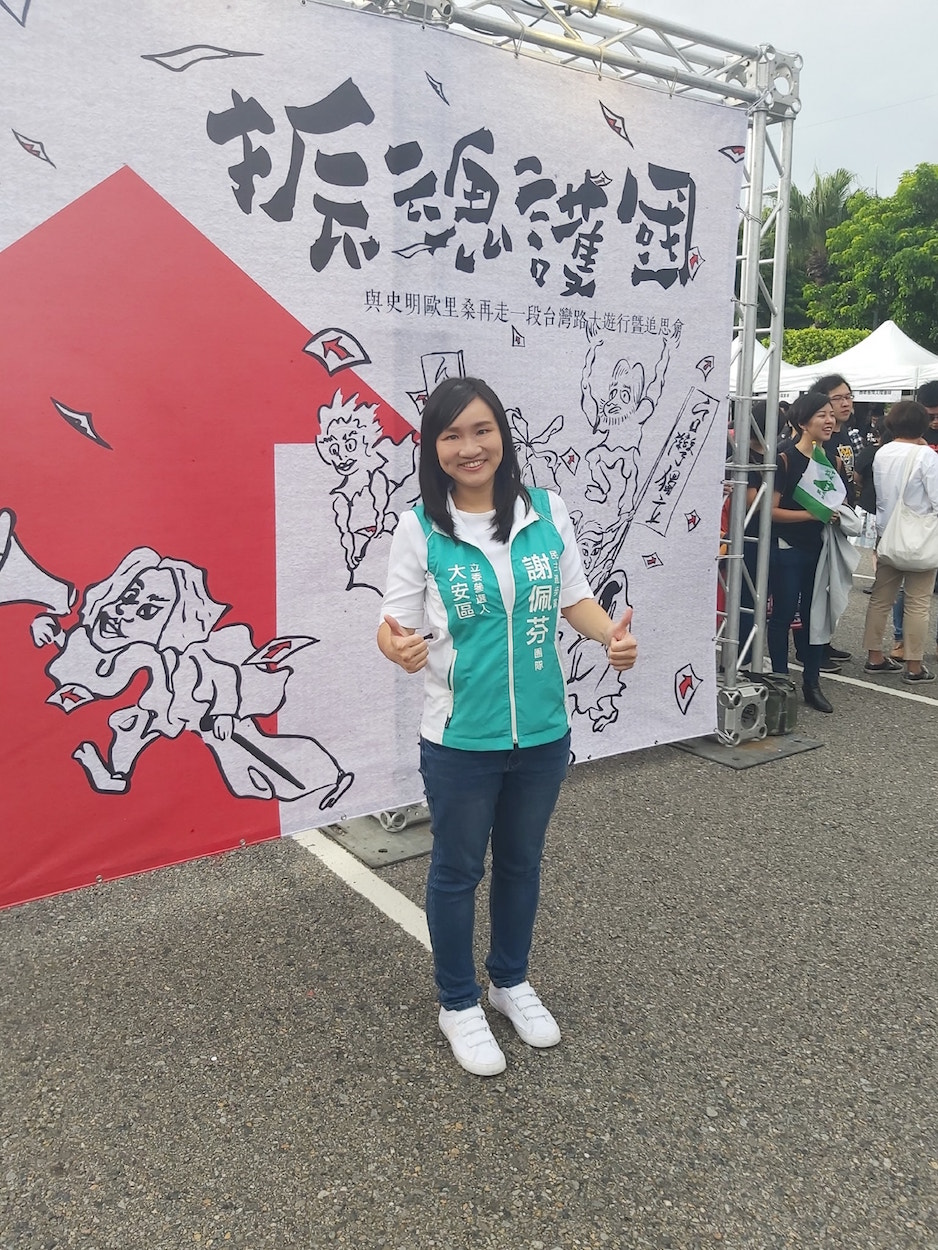 At the same time, I can understand why Taiwanese might feel inferior. It’s because we have always been comparing ourselves to China, feeling that our country is not as large as China, whether in terms of size or population, and that China is so many times larger than us that we can’t compare to them.

But I don’t think there’s any need for this. There are many countries smaller than Taiwan, but they’re confident in themselves as parts of the international world, and don’t hesitate to speak up for themselves. I hope that Taiwanese can see their strong points, that Taiwan is beautiful, and that we can become brave enough to speak up for ourselves to the world. Only then will the world recognize us, listen to us, and come to know what kind of place Taiwan is.