AS THE ELECTIONS loom closer, on any early morning or evening, young activists in light green jackets with the words “Democratic Progressive Youth” (民主進步青 or DPY) can be seen canvassing on the sidewalks and intersections across Taiwan. At zoos, parks, major residential and downtown crossings, the DPY is comprised of both young party officials and volunteers under thirty-five. Many DPY members have the common fear that Taiwan’s freedoms and way of life is being eroded through Chinese influence, inclusive of both gradual economic penetration and the threat of political integration achieved through an outright use of force, while hoping to preserve the progress of democratic and liberal reforms carried out by President Tsai Ing-wen. 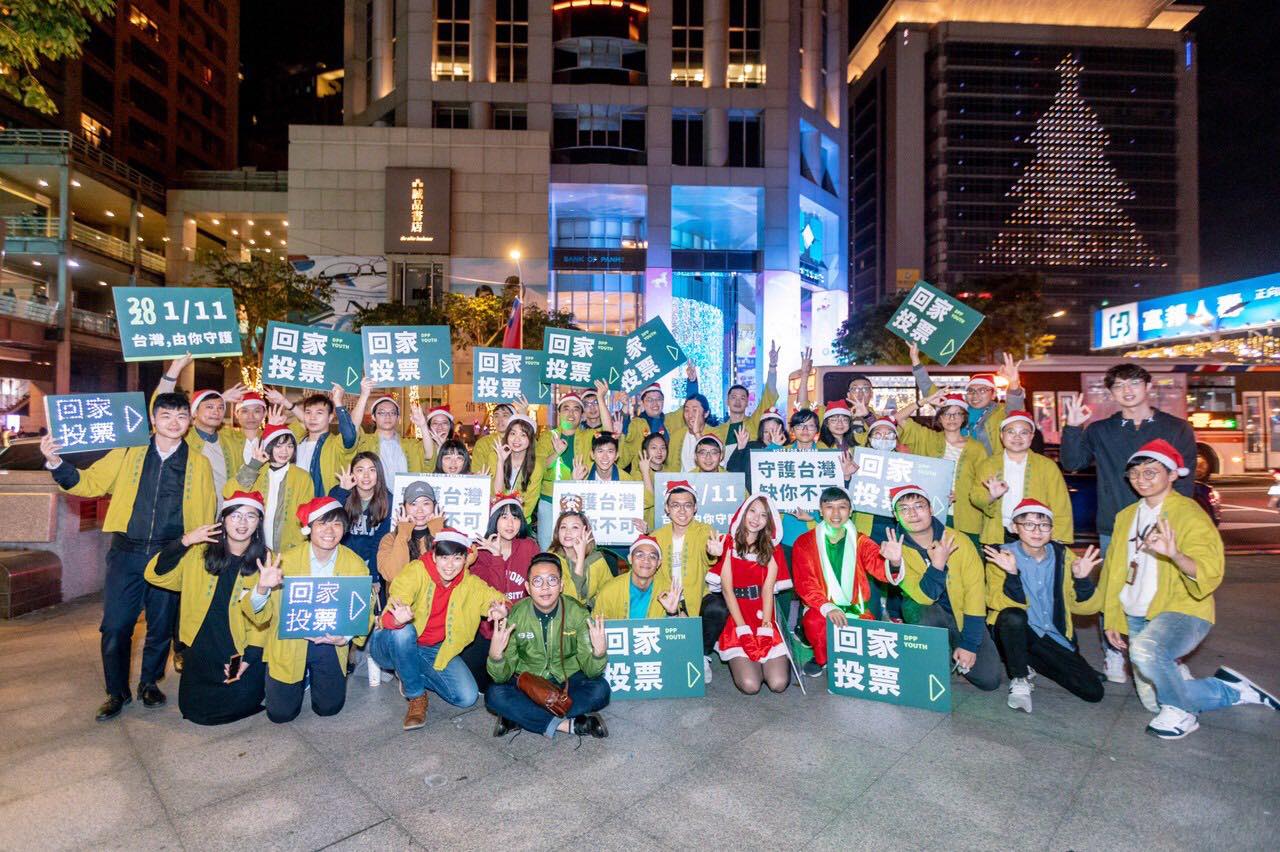 DPY members start their day from 7:30 AM in the morning and oftentimes are on the streets again after class or work in the evening at 6:30 PM. Their presence can range from groups of five to fifty people, depending on the spare time each volunteer has, and they can be seen on sidewalks waving green signs of “Taiwan needs you” (守護台灣，缺你不可), “Go home and vote!” (回家投票), and “January 11, Taiwan is counting on you for protection” (1/11 台灣，由你守護), while chanting Tsai’s reelection campaign slogan of “Taiwan, Let’s Win 2020!” (2020台灣要贏！)

According to Aman Wu (吳濬彥), the DPY’s leader, a former Sunflower Movement activist, and the director of the DPP’s department of youth development, the theme of this election season’s canvassing activities is that “Freedom is a ticket that merely just allows us to set out, and it comes with three votes” (自由是一張乘車，三張選票), a metaphor to the pursuit of freedom and a dignified way of life—which comes with responsibilities in how we vote—with three votes in this election, the presidential vote, legislator vote, and political party vote. 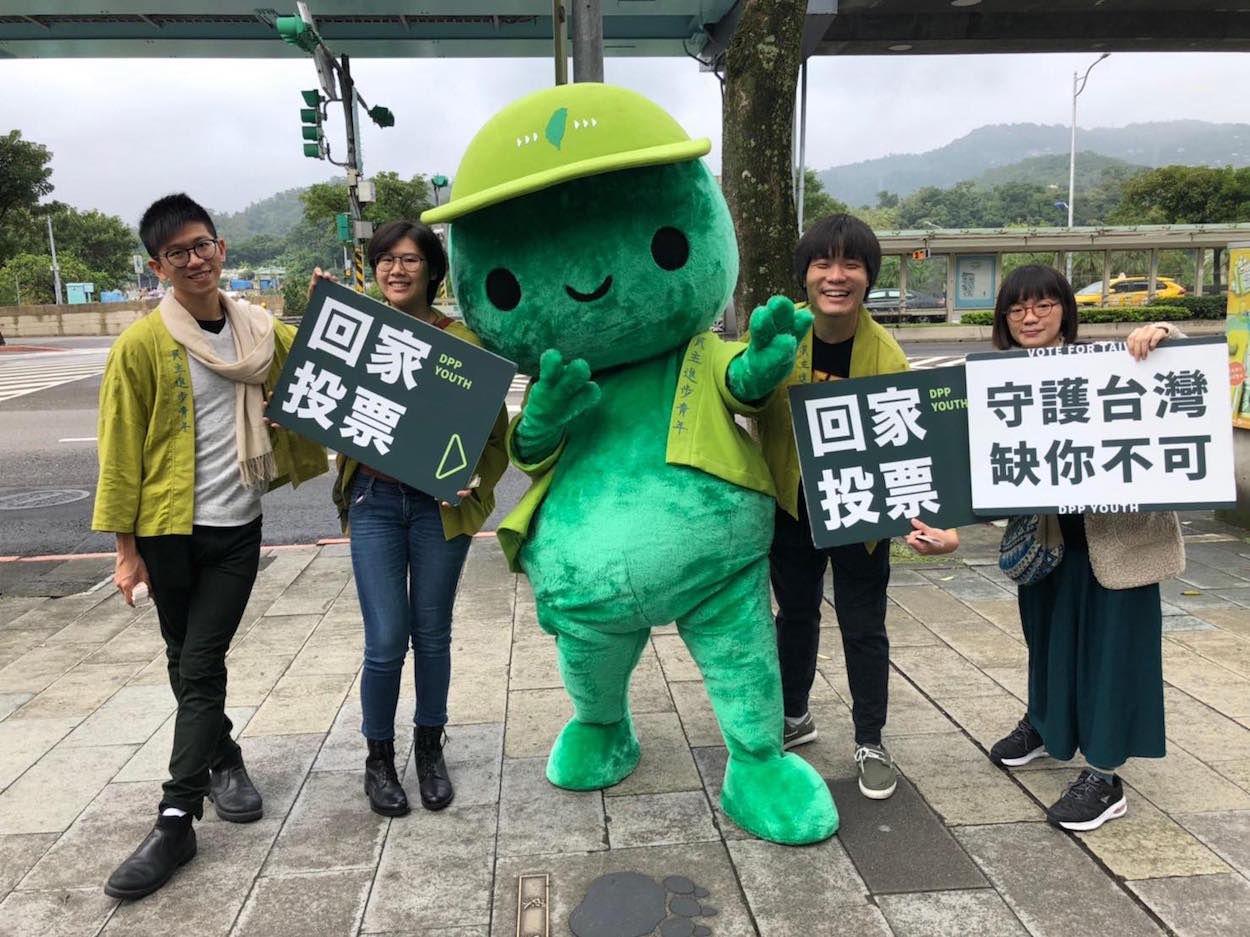 With an increasingly polarizing gap in political ideology and identity between the elderly and younger voters, reaction to DPY canvassing on the streets have been mixed. Elderly reactions have sometimes been hostile, including aggressive tantrums, at times involving paper throwing, chanting Han Kuo-yu campaign slogans, shouting “Long live the ROC!” (中華民國萬歲！), number three hand signs (Han’s candidate ballot number), or comments on telling the canvassers to go home and study–-implying that younger voters are brainwashed and are wasting their time supporting Tsai’s reelection bid.

Ted Lin (林俞均), an international marketing associate who also serves as a DPY team leader, was verbally attacked canvassing at the Daan Forest Park comments that “Politics is the responsibility of every citizen. With many young people indifferent, it is worth standing up to defend the very values they believe in, using our influence to encourage more people. Taiwan needs us to help safeguard it.” (政治理當是一個公民的責任，而在這個多數年輕人政治冷感的狀態下，自己必須站出來，捍衛自己認為對的價值，同時用自己的力量影響更多人。台灣這塊土地需要我們的守護。). 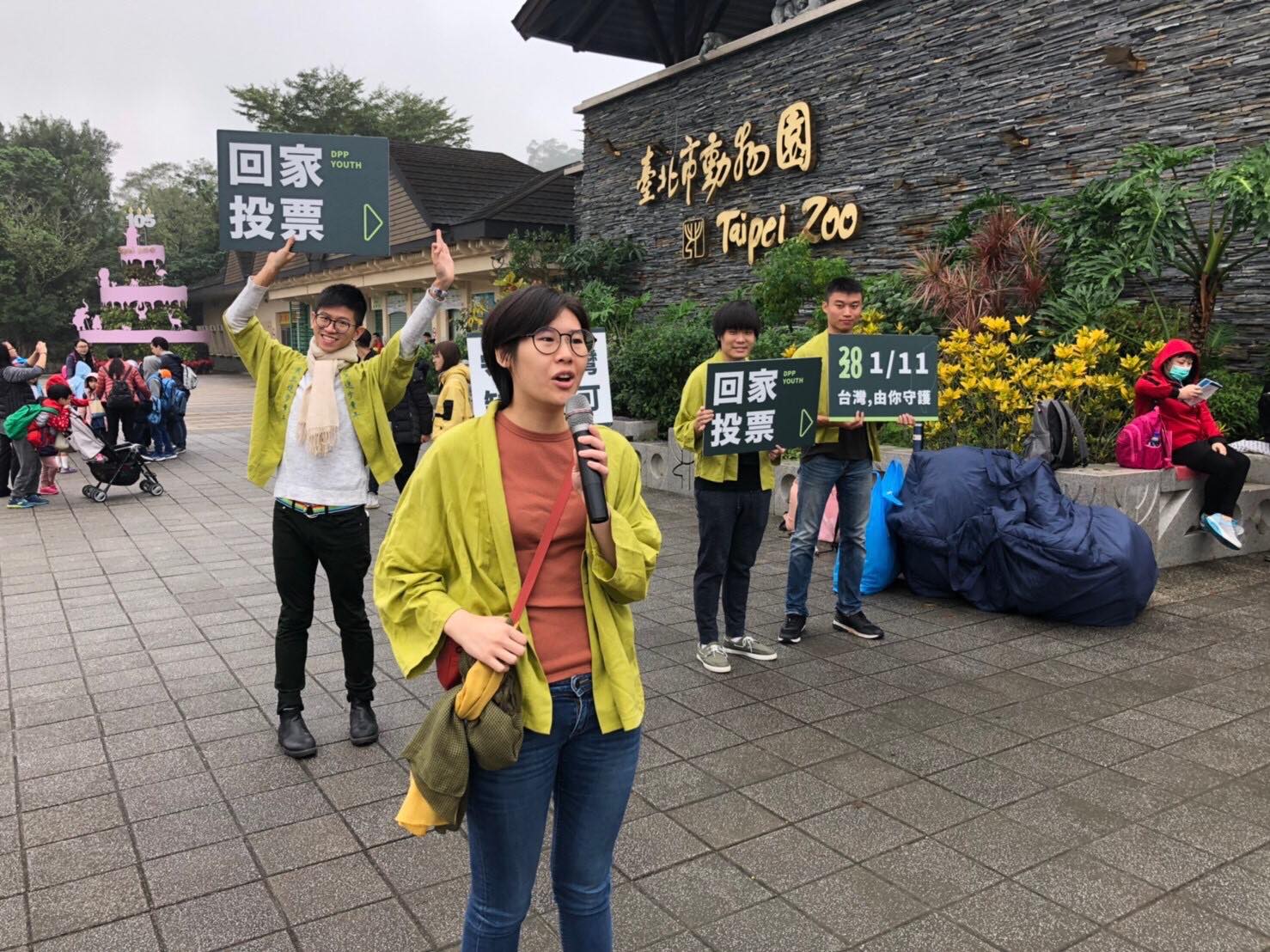 In contrast, younger voters under 40 have tended to be been more supportive, asking to take pictures with the canvassers, holding DPY signs and placards—promising to together help save Taiwan by going to the polls on election day and sharing those pictures on social media to spread the word. Interestingly, many have approached DPY canvassers asking for advice on how to persuade their parents and older family members to “wake up,” to refrain from voting for Han in switching to support “Taiwan loving parties”.

With the primary objective of encouraging younger voters to the ballot box, the DPY planning teams have been creative in efforts to reach out to younger voters, such as designing a green DPY mascot for places where young parents are likely to take their children to, such as at Christmas festivals throughout the city and the Taipei Zoo in Muzha, another predominantly deep-blue neighborhood. After being reported to the police by elderly pan-blue naysayers, Su I-Ching (蘇怡兢), a Kaohsiung native NCCU graduate student and the DPY team leader at the Taipei Zoo, proudly proclaims that all her efforts are worth it. “If grandpa waged a revolution to give dad voting rights, but dad votes unwisely, then the daughter is left with no option but to wage revolution herself,” she says. (爺爺革命，才有投票。爸爸亂投票，兒女就得革命。)

Another effective approach that DPY canvassers have leveraged is handing out free items, such as handing out stickers to younger voters, and soap to older voters–-symbolically, a tool to cleanse Taiwan from Chinese communist infiltration. DPY put together a team to collaborate with many well-known young artists in creating a set of stickers to mobilize the youth vote. Meanwhile, the bars of soap that the DPY hands out contain information on the packaging about who to vote for, their ballot numbers, and why to vote for them—mostly with catchphrases about safeguarding Taiwan. 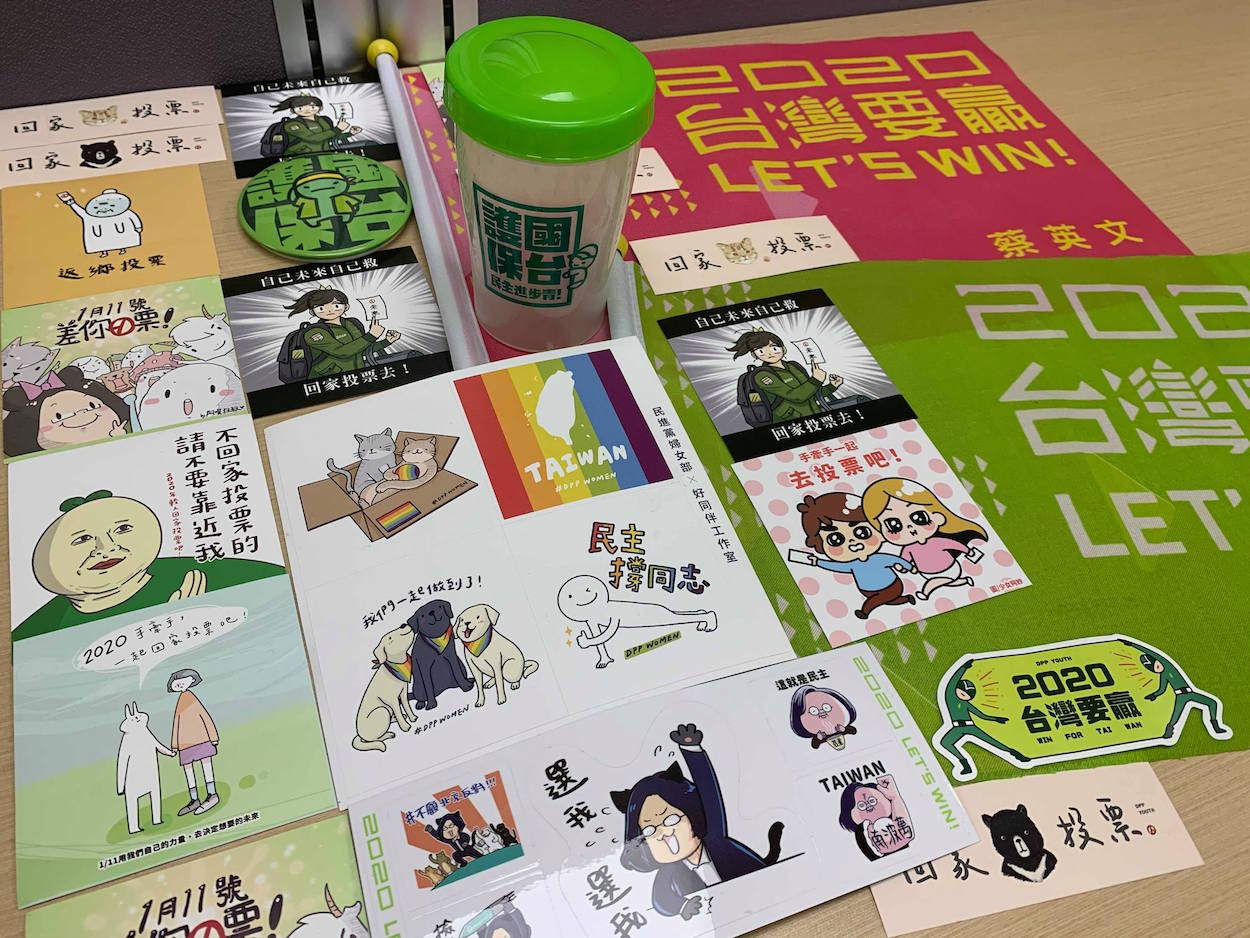 As younger generations are increasingly worried about Taiwan’s future, the term “wangguogan” (亡國感), meaning “national doom” has been increasingly discussed. This is sometimes referred to colloquially by a rhyming term “mangguogan” (芒果乾), meaning “dried mango strips”. Whether this sense of critical despair will lead to younger voters to overwhelmingly vote for the DPP and other pan-green parties—hoping to defend Taiwan from Chinese aggression—remains to be seen. We can only hope that they will forego their Saturday movies and dates for the sake of collectively protecting Taiwan, refusing to let others decide theirs and the country’s future.