PROTESTS TOOK place in Hong Kong over the New Year’s, with police firing tear gas and water cannons shortly after midnight on New Year’s Eve, and a march yesterday, New Year’s Day, that drew over 1.03 million attendees according to organizers.

In particular, many seem to have been motivated to demonstrate across the New Year’s holiday in order to show that protests will continue into the next year. Protests have rocked Hong Kong for over six months now. The demonstrations continue the pattern of an uptick in intensity for protests whenever major holidays take place in Hong Kong, as also took place during Christmas. 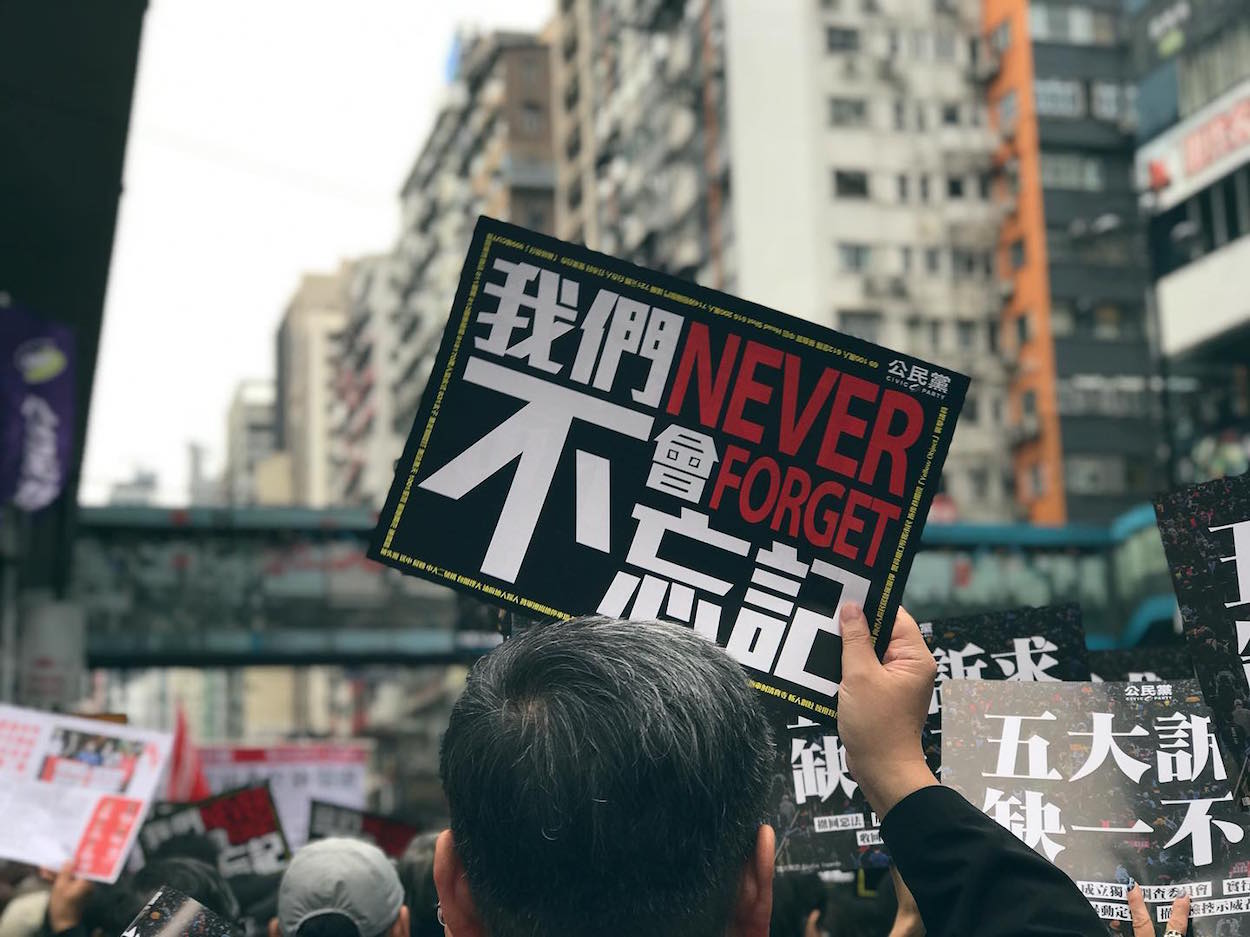 Demonstrations on New Year’s Eve involved protesters commemorating the four-month anniversary of an August 31st incident in which police fired tear gas in the Prince Edward MTR station. Some believe that police killed demonstrators during this incident, but that this has been quietly covered up, as a result of which a memorial has been set up outside of the Prince Edward MTR by demonstrators—though this has been periodically torn down by police or pro-Beijing groups.

Four months after the incident, police still have not released footage from inside the MTR station. Among those arrested on New Year’s Eve included individuals memorializing the incident.

The march on January 1st was called for by the Civil Human Rights Front (CHRF), which has organized the largest of the marches which have taken place to date during the past months of protest, including demonstrations that drew over two million attendees. The CHRF stated that its crowd count of yesterday’s demonstration indicated that over 1.03 million attended the protest, making the demonstration larger in size than the demonstration in June that began the initial wave of protests. However, the CHRF stated that its crowd count was unable to be completed due to police actions.

Despite the CHRF having secured a Letter of No Objection from police beforehand to hold the march, the police abruptly canceled permission for the march at 5:30 PM and ordered the crowd to disperse within thirty minutes. The Hong Kong police has been criticized for ordering the rapid dispersal of over one million individuals in a short amount of time, disregarding the potential risks of doing so.

On both New Year’s Eve and New Year’s Day, police fired water cannons, tear gas, rubber bullets, and attacked with batons, while demonstrators responded by tearing up bricks from streets to use to use for barricades or as projectiles and throwing Molotov cocktails. With increasing sharp lines drawn between “Yellow Economy” stores supportive of the demonstrations and “Blue Economy” stores supportive of Beijing and the Hong Kong government, it is increasingly a pattern for demonstrators to deface “Blue Economy” stores. Demonstrators also vandalized Chinese-owned banks, something that had previously taken place during past demonstrations. 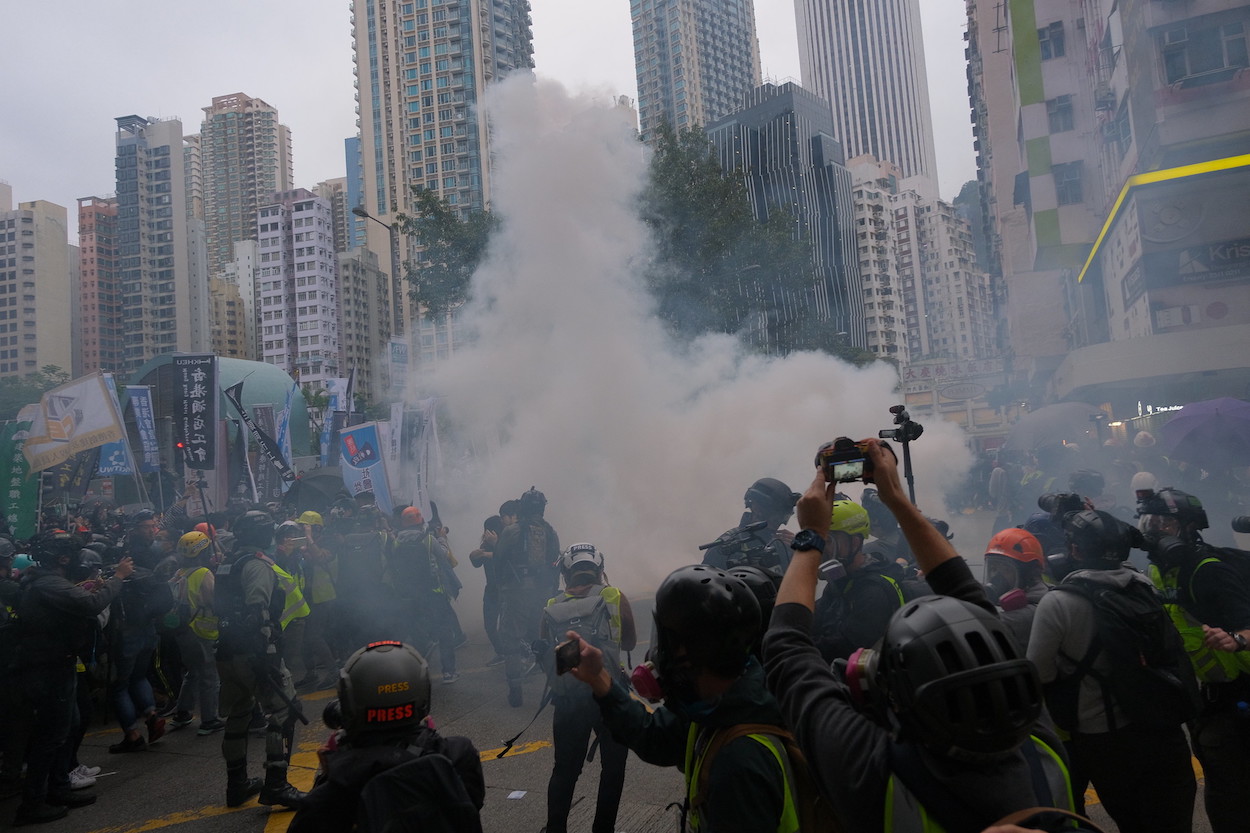 After the New Year’s, regular protest activities in Hong Kong such as the daily “Lunch with You” protests, have resumed. It should be clear that protests will continue in Hong Kong, then. Although some questioned after the relative period of calm following District Council elections whether this meant that the energy of the movement was spent, it seems that protest is now a part of everyday life in Hong Kong. A notable shift in the movement has also been the formation of new unions, in order to continue resistance in the workplace and to counteract pro-Beijing labor unions.

No political solution seems in sight for the current protests, with the Hong Kong government and Beijing still refusing to concede on any of the demands of protestors. Executive Council member Regina Ip recently claimed that the Hong Kong Executive Council had offered to resign en masse as one way of addressing the situation, but that this was rejected out of hand by Chief Executive Carrie Lam. Likewise, though it is a question as to whether such reports are overstated, there are increasing claims of splits in the Hong Kong police, with reports of police moonlighting as demonstrators and leaked documents from inside the police. However, the future development of the protests remains to be seen.