The Taiwan People’s Party Should Not Be Mistaken for Anything but a Conservative, Pan-Blue Party

MAKE NO MISTAKE, Ko Wen-je’s Taiwan People’s Party (TPP) is a conservative political party and one that slants toward the pan-Blue camp.

Ko Wen-je, who is currently serving his second term as mayor of Taipei, announced the formation of the TPP in August after over a year of speculation about whether Ko would form a political party in order to build support for a bid for the presidency. After several high-profile gaffes, Ko eventually withdrew plans to run in 2020, but it appears as though Ko may now hope to run for president in 2024. 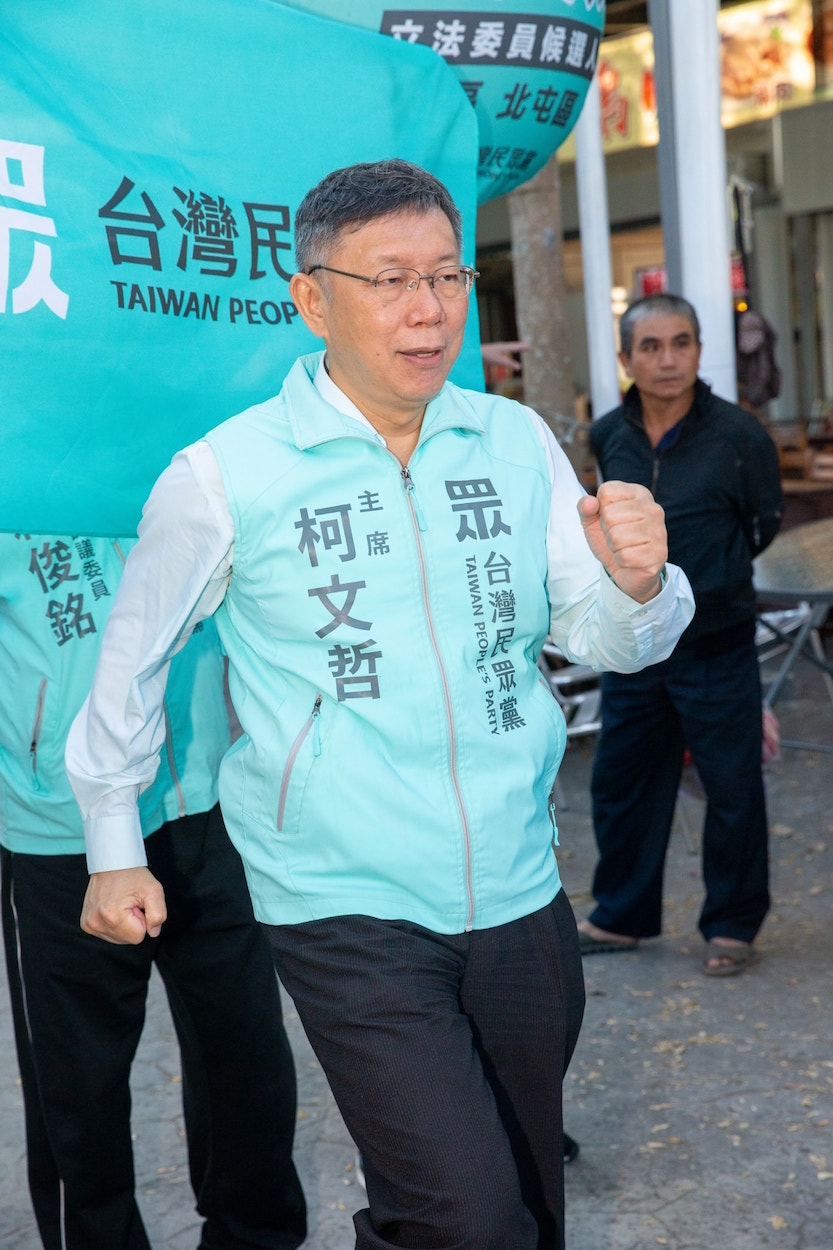 With Ko intimating that he intended to form a political party during his reelection campaigning last year, it was originally speculated that the name of Ko’s party would be “White Force” (白色力量). The name “White Force” would be a means of trying to imitate the name of the youth-oriented post-Sunflower Movement third party, the New Power Party (時代力量), which has a similar-sounding name in Chinese, as well as an attempt to gesture toward the party as being independent of political partisanship. This would be by distinguishing the party as “White” and “Colorless,” as compared to the pan-Blue and pan-Green camps.

At the same time, white is one of the party colors of the KMT, suggesting that while this party would claim to be “beyond Green and Blue,” the party might still lean more heavily toward the pan-Blue camp. Indeed, the informal and prospective “White Force” included former KMT members such as Wang Zhi-ya, who ran with Ko’s backing after failing to win the KMT nomination for the Daan-Wenshan area of Taipei.

The name “Taiwan People’s Party” was a reference to the 1927 political party by the same name founded by Chiang Wei-shui, which was Taiwan’s first political party. Although the ideology of the original Taiwan People’s Party was Sun Yat-sen’s Three Principles of the People, Chiang is today remembered as a symbol of Taiwanese identity and seen as a political predecessor by Taiwanese identity activists. Hence the party name of the TPP was chosen to try and primarily appeal to members of the pan-Green camp.

Ko originally ran for mayor in 2014 as a political independent, claiming to be a newcomer to politics beyond pan-Blue and pan-Green color distinctions in Taiwanese politics. That being said, Ko was originally perceived as closer to the pan-Green camp. Ko was endorsed by the pan-Green camp in 2014, which chose not to run any candidates of their own for Taipei mayor, and Ko enjoyed the support of post-Sunflower Movement youth activists. 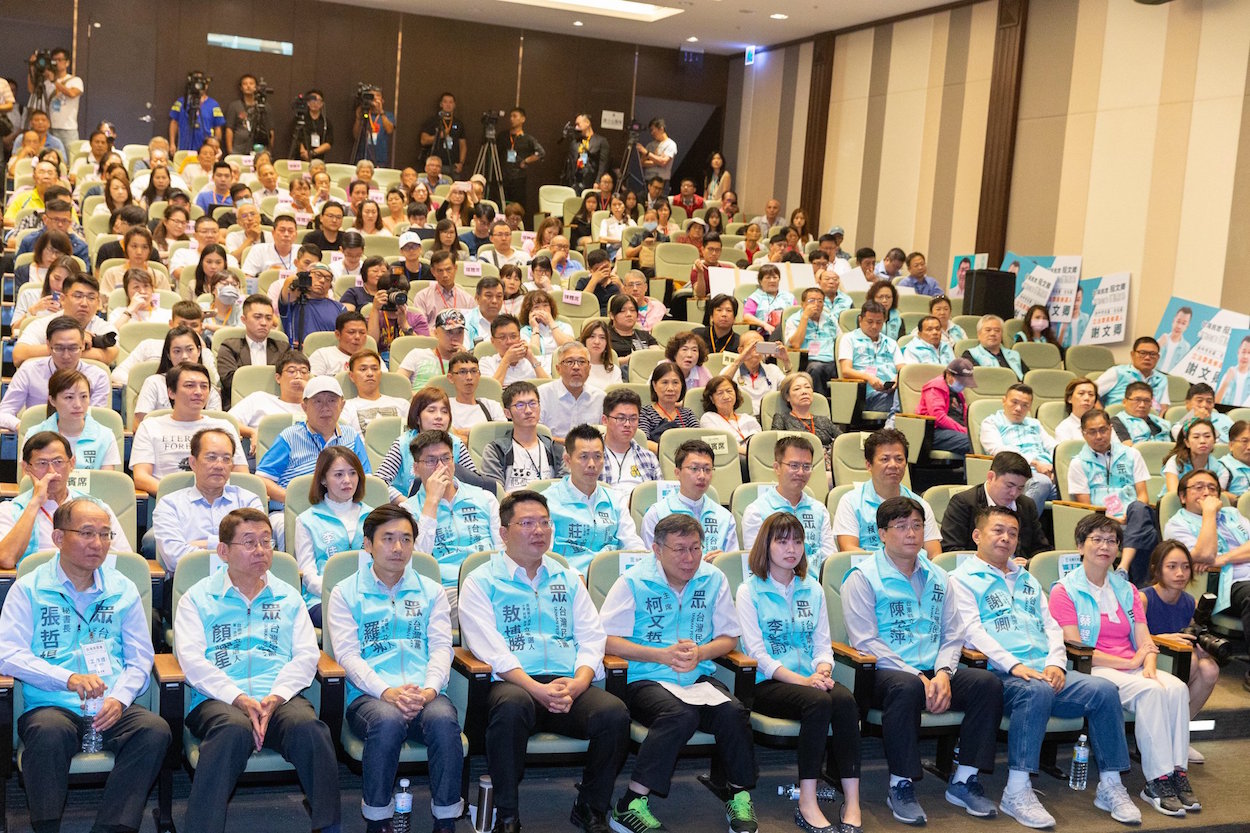 However, Ko has increasingly drifted away from the pan-Green camp. As mayor of Taipei, Ko has conducted controversial city-based cross-strait exchanges with Shanghai for years, something that has provoked ire due to the fact that Ko frequently refers to “one people on both sides of the Taiwan Straits, sharing a common destiny” as part of these exchanges.

After pro-independence student demonstrators protesting against a concert event held on the NTU campus as part of these exchanges were attacked by pro-China gangsters, Ko failed to clear up questions about how this incident had taken place under the watch of the Taipei city police. Ko also began to associate with pro-China figures such as China Unification Promotion Party chair “White Wolf” Chang An-lo, a former killer of political dissidents for the KMT during authoritarian times.

Ko has been open in his criticisms of president Tsai Ing-wen and the DPP, accusing the DPP of hiring American author Ethan Gutmann to engage in a deliberate smear campaign against him regarding charges that Ko was implicated in organ trafficking of Falun Gong members made by Gutmann in a book on Chinese organ harvesting. Ko has made such accusations against the DPP despite the fact that the DPP endorsed him when these allegations originally emerged. Ko also claimed in May that Tsai’s actions were “provocative” of China and stated that Taiwan should “remain silent” regarding Xi Jinping’s efforts to achieve the political annexation of Taiwan through the formula of “One Country, Two Systems”.

Despite Ko’s words and actions pointing towards a drift toward the pan-Blue camp, Ko continues to insist that he is a political independent who is not affiliated with either political camp.

Indeed, the TPP has, like Ko, attempted to claim that it is not affiliated with either camp. It is an unusual provision of the TPP’s party charter that party members can also simultaneously be members of the KMT or DPP. Few of the TPP’s candidates have taken up this provision, instead choosing to withdraw from the KMT or DPP to join the TPP. 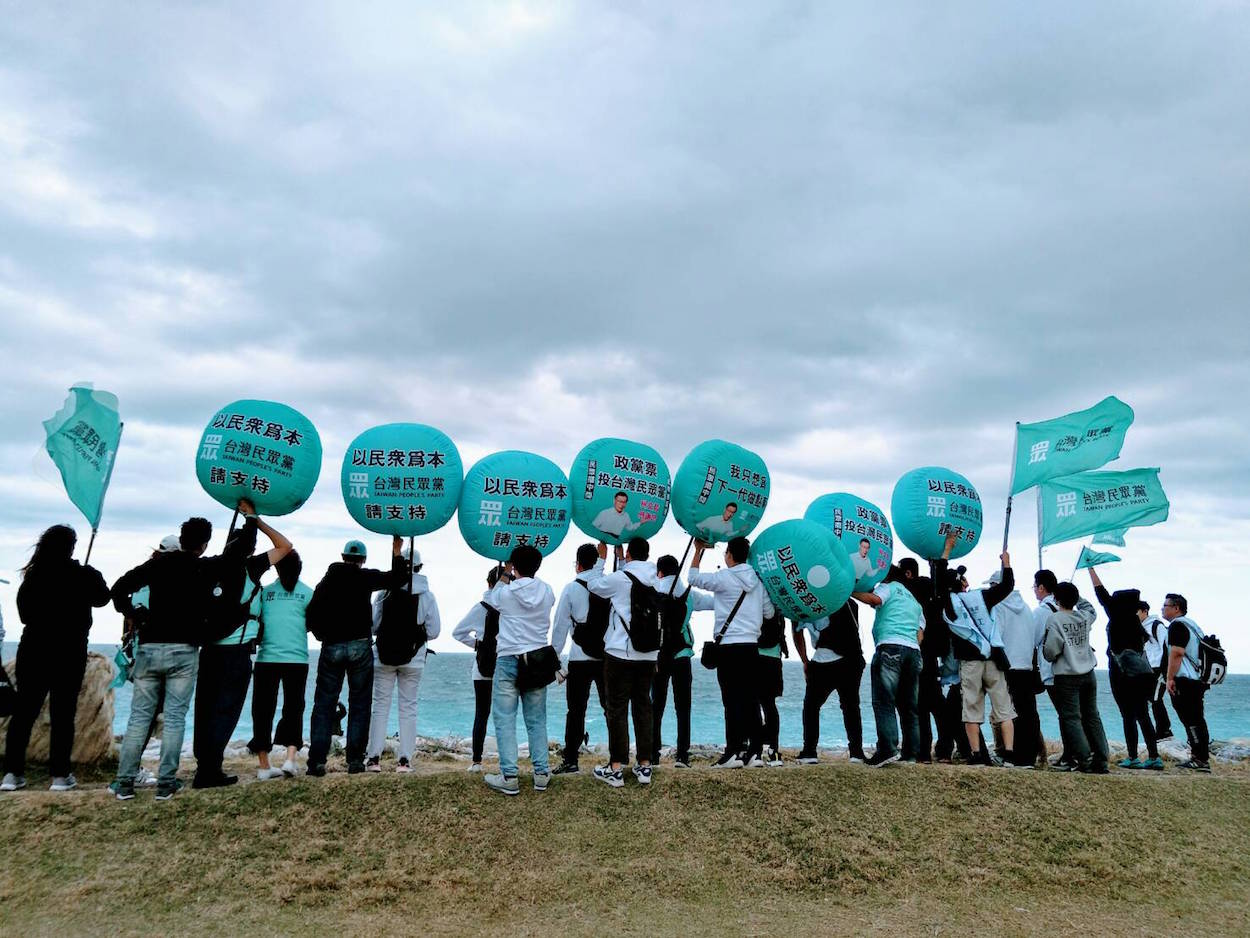 It is true that the TPP is running several former DPP candidates, including Kimyung Keng (何景榮), former DPP Kaohsiung city councilor Luo Ding-cheng (羅鼎城), and other DPP members, such as former DPP party workers Li Min-yu (李旻蔚) and Zhuang Yi-liang (莊貽量). At least Li has been openly supportive of Tsai’s reelection. However, one notes that the overall orientation of the party is closer to the pan-Blue camp. For one, there appear to be a larger number of candidates with backgrounds drawn from the pan-Blue camp in the party.

Among the founding party members of the TPP were former KMT city counselors Xu Li-xin (徐立信) and Zhong Xiao-ping (鍾小平), the latter of which is also a former New Party member. Candidates that the party is running include former New Party member Lin Guo-cheng (林國成), and former KMT member Ao Bo-sheng (敖博勝). Likewise, many TPP candidates are individuals who have historically been accused of drawing false equivalences between the pan-Green and pan-Blue camps in order to defend China, including 28-year-old Tsai Yi-fang (蔡宜芳), and former Taipei city department of labor head, Lai Xiang-lin (賴香伶), who was previously a member of Raging Citizens Act Now—a group accused of having drifted toward the pro-unification left in the Taiwanese labor movement.

Despite Tsai’s leftist credentials, the TPP’s party list also includes Cynthia Wu (吳欣盈), one of the members of the family behind the Shin Kong business empire, and Ann Kao (高虹安), a close associate of FoxConn CEO Terry Gou—hardly a company known for labor-friendly business practices—Kao being the former head of the big data department at FoxConn.

Likewise, the views of TPP candidates seem to hew toward conservatism, sometimes evidencing homophobia and sexism. TPP candidate Hsieh Wen-ching (謝文卿), who is running in Taipei City Constituency 5, is actively campaigning on a platform to repeal the Tsai administration’s legalization of gay marriage. TPP candidate Wu Da-wei (吳達偉), who is running in New Taipei District 7, is a well-known personality on the Internet forum PTT for posting pictures of attractive women online.

Apart from the party composition of the TPP, it is worth remembering that the party is one whose fundamental political orientation is effectively dictated by Ko—for example, the date of the party’s formation was on Ko’s birthday. 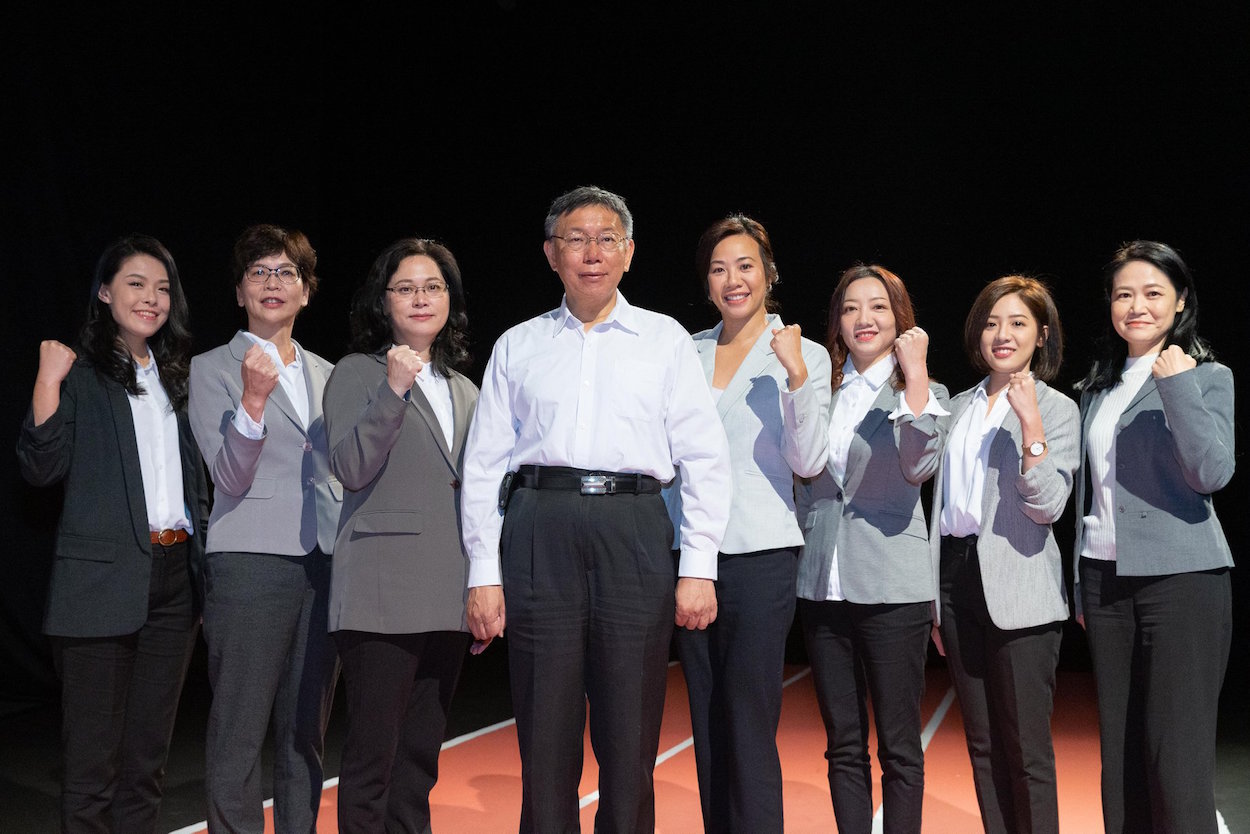 Ko making an appearance with female members of the TPP, likely in order to respond to accusations of misogyny. Photo credit: 台灣民眾黨/Facebook

As party chair, Ko has focused a great deal of effort into courting high-profile KMT members to join the party. Ko has invested much time and effort into attempting to lure politicians such as former KMT majority speaker Wang Jinpyng and FoxConn CEO Terry Gou, who was unsuccessful in his bid for the KMT’s presidential nomination earlier this year, to join the TPP. While neither joined the party, Ko continues to enjoy close ties with both. And despite his claims of bipartisanship with both the pan-Blue and pan-Green camps Ko has put no effort into attempting to court high-ranking DPP members.

Ko has also caused controversy for misogynistic and sexist comments many times in recent memories, pointing to Ko’s own social conservatism. This includes stating that “If there are too many women in an industry, that reflects that that industry is in a downturn,” saying that “That thirty percent of women over thirty is a crisis of national stability”, claiming that women without their make-up are “scary”, and denigrating gynecologists for working with “holes” in the bodies of women.

Ko has been especially denigrating of female politicians. Ko made body-shaming comments directed at Chen Chu, one of Taiwan’s most prominent female politicians and an instrumental figure in the Taiwanese democracy movement, by claiming that she was a “fatter version of Han Kuo-yu.” Ko also provoked controversy in 2014 after commenting that KMT Chiayi mayoral candidate Chen Yi-chen, a former journalist and television broadcaster, was “pretty” and that, consequently, she would be better suited to “working behind a counter” than running for public office.

It remains to be seen how well the TPP will do in 2020 elections. With the TPP projected to do quite well in upcoming elections, the TPP may actually have been rather successful among swing voters in construction the perception that it is an independent party that is distinct from the pan-Green and pan-Blue camps. In light of that the de facto composition of the TPP slants toward the pan-Blue camp, some question whether the TPP could prove a way for the pan-Blue camp to reinvent itself politically going forward.

The omnipresence of Ko on the TPP’s campaign materials is indicative of how strongly centered the party is around him. Photo credit: 柯粉俱樂部/Facebook

However, with the party being one centered around one central figure—Ko Wen-je—one generally expects the long-term viability of the TPP to be limited. Even the NPP, which emerged from the 2014 Sunflower Movement and rapidly became Taiwan’s third-largest party in the course of a few years, was ultimately unable to overcome the inertia of being too centered around the party’s two political heavyweights, Huang Kuo-chang and Freddy Lim. Hence the current internal crisis faced by the party, with the party wracked by severe internal splits, and Lim’s departure from the party.

Seeing as the TPP originates out of Ko’s personal following and does not have anything like the residual momentum of a national social movement on the scale of the Sunflower Movement behind it, the TPP’s long-term prospects of growth seem limited. Indeed, with the party’s reputation so tied to that of Ko himself, one notes that this will likely be dangerous for the party’s long-term future, particularly given Ko’s record of frequently creating public blowback against himself through gaffes.