Police violence against demonstrators actually took place in the week after elections, with attacks on demonstrators by police on November 30th and December 1st as night fell, and clashes in Mong Kok. However, this violence was not widely reported on. 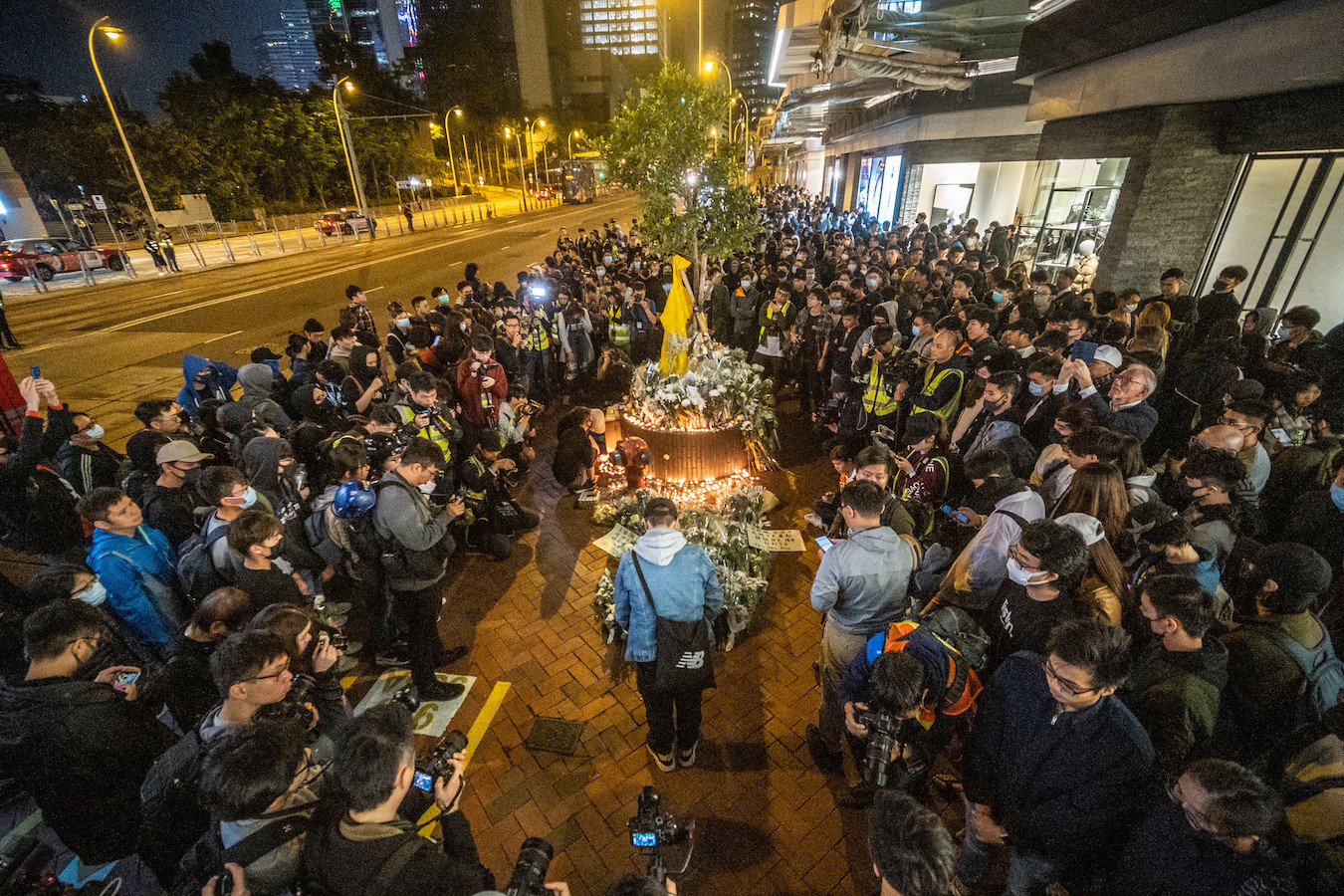 Quite unusually, last weekend saw limited clashes with police after a march that organizers claim drew 800,000. Last weekend marked the sixth month anniversary of the ongoing protests in Hong Kong, which began in June, and the march was called for by the Civil Human Rights Front. The Civil Human Rights Front has organized the largest demonstrations which have taken place during the past half-year, including demonstrations that drew over one million and over two million people.

Police violence yesterday took place after protest activities in shopping malls, billed as a form of Christmas shopping, and memorial activities for Marco Leung, who is viewed as the first protestor to die connected to the movement. Leung died after injuries sustained from a fall on June 15th, after putting up protest banners. Leung is thought to have either killed himself, fallen accidentally, or as a result of police actions. A rally by social workers also took place in the afternoon in Edinburgh Place, with a planned general strike by social workers scheduled to take place next.

“Christmas shopping” protests took place in malls including the New Town Plaza mall in Shatin, the Cityplaza Mall in Tai Koo, and the Telford Plaza mall in Kowloon Bay, with demonstrators calling on shoppers to boycott stores supportive of police. Memorial activities for Leung were held in the vicinity of Harcourt Garden and Pacific Place in Admiralty. Police entered the New Town Plaza mall and Telford Plaza mall several times through the day to make arrests, with journalists among those attacked by police, and sightings of individuals who appeared to be pro-Beijing triad members.

With the outbreak of clashes with police as the night went on, clashes proved particularly intense in Mong Kok. Police fired tear gas canisters multiple times through the night. In the course of this, a Baptist University student journalist was shot in the eye with a tear gas canister, though it appears as though he will not have any permanent injuries. Other journalists also came under assault, with video widely circulated of footage that appears to show a journalist surrounded and being beaten by police with batons. Though less widely reported on, demonstrations also took place in Tseung Kwan O, with demonstrators tearing up bricks from the street.

Protests are likely to continue in Hong Kong, then. The decreased number of incidents of police violence since District Council elections may be, in part, because of the fact that the election results demonstrated that the majority of the Hong Kong public continues to support the protests. At the same time, one expects the police to continue to feel emboldened to carry out violent acts against the Hong Kong public, as the clashes which have taken place since District Council elections go to show. And neither Beijing nor the Hong Kong government as yet seem to demonstrate any willingness to politically compromise, nor do they seem to have any new solutions to the ongoing political crisis in Hong Kong.

This video circulated on social media provides an arieal view of the incident of a journo being allegedly beaten up pic.twitter.com/EkhWuMySI7

To this extent, reports indicate that a Hong Kong man surnamed Chan, who crossed into Macau by bus while traveling from Hong Kong has likely been detained by Chinese authorities. Chan’s last text to his son before disappearing seems to indicate that he was arrested at a security checkpoint on the bridge connecting Hong Kong and Macau. If so, Chan would be the latest in a series of Hongkongers who have been detained by the Chinese government after crossing into China, detentions which seem to be aimed at intimidating members of the Hong Kong public.

What direction future political developments take in Hong Kong, then, still remains to be seen. Protests are set to continue beyond their half-year mark.