AN ATTEMPT by KMT presidential candidate Han Kuo-yu to attack the DPP on the issue of its failure to pass an asylum law for Hongkongers proves ironic. It is the KMT, after all, which is the political party in Taiwan calling for the political unification of Taiwan and Hong Kong. At the same time, it is true that the DPP has failed to take substantive action to help Hongkongers seeking refuge in Taiwan.

On December 12th, Han Kuo-yu posted on Facebook that the DPP’s failure to pass any refugee or asylum bill aimed at helping Hongkongers was a way in which the DPP was leveraging on the sense of “national doom” that many in Taiwan presently feel. According to Han, this would be a means by which the DPP was leveraging on such fears in order to ensure a victory in 2020 presidential elections.

In his post, Han stated that, “Human rights are the basis of democracy and democracy is an extension of human rights.” As such, Han called for the present situation in Hong Kong to be solved through legislation and claimed that the KMT would take up legislation to aid Hongkongers if elected.

This would not be the first unexpected statement by Han on Hong Kong. In November, Han seemed to go off script by stating that he believed that Hong Kong’s problems would be solved by genuine universal suffrage. Seeing as Han appears to be the CCP’s preferred candidate in Taiwan, Han’s statement surprised due to the CCP’s refusal to concede to the demand of demonstrators for genuine universal suffrage in Hong Kong.

That being said, one notes that KMT politicians continue to advocate for closer relations between Taiwan and China. While KMT politicians have taken to lashing out at the political administration of Hong Kong Chief Executive Carrie Lam and the framework of “One Country, Two Systems,” KMT politicians now claim that it is the DPP whose actions which would lead to this being instituted in Taiwan. The KMT has attempted to draw distinctions between the notion of “One Country, Two Systems” and the 1992 Consensus, which they continue to advocate for as the basis of cross-strait exchanges.

Whatever Han’s statements, it is an obvious fact that the political unification with China would mean an end to democracy in Taiwan and the severe deterioration of human rights in Taiwan.

Indeed, one notes that after Chinese president Xi Jinping stated in a speech in January that “One Country, Two Systems” was still the framework by which he hoped to see the unification of Taiwan and China and asserted that the use of military force was still on the table if Taiwan resisted efforts at unification, KMT politicians seemed to follow suit with his statements. Before the outbreak of protests in Hong Kong, Han himself had traveled to Hong Kong and China to sign trade agreements, an act aimed at creating the perception that he was a politician able to ensure stable economic relations with China. As part of this, Han met with Carrie Lam and visited the Chinese Liaison Office in Hong Kong. 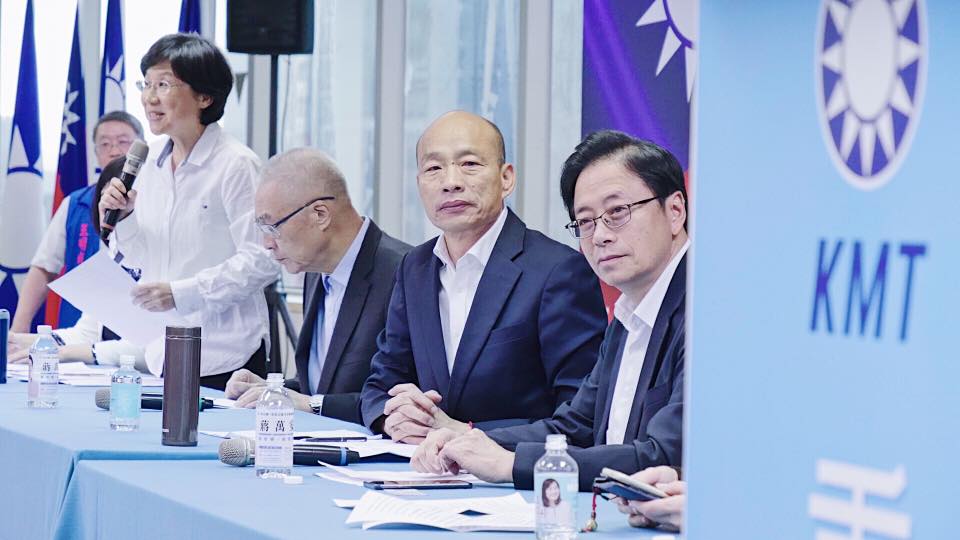 Nonetheless, it is true that the Tsai administration has not taken up asylum legislation to help Hongkongers in any substantive way. In the wake of revelations from New York Times report, which has been controversial in Taiwan for revealing the names of demonstrators and revealing too much information on how Hongkongers have been entering Taiwan, it is thought that there are 200 or more Hongkongers currently in Taiwan seeking asylum. Some entered the country and overstayed their visas, while some may have even secretly entered the country by boat.

The Tsai administration previously suggested that it would take action to help Hongkongers, but began to back away from the issue when it appeared as though large numbers of Hongkongers would, in fact, attempt to seek asylum in Hong Kong. Apart from that Taiwan has historically been poor on asylum issues, the Tsai administration has attempted to raise the issue of possible Chinese infiltrators mixed in with Hong Kong asylum seekers and claims that existing procedures are sufficient to deal with the influx of asylum seekers.

Accusations by Han that Tsai was simply hoping to use the issue for electioneering purposes may not be completely off the mark then, even if the same accusation can also be laid at his feet.