THE WEEKEND has seen violent attacks on demonstrators by Hong Kong police following the death of 22-year-old student protester Alex Chow Tsz-lok on Friday after a fall from a car park earlier in the week and the emergence of accusations that police gang-raped an 18-year-old woman last month. This weekend marks the 24th consecutive weekend of protests in Hong Kong. 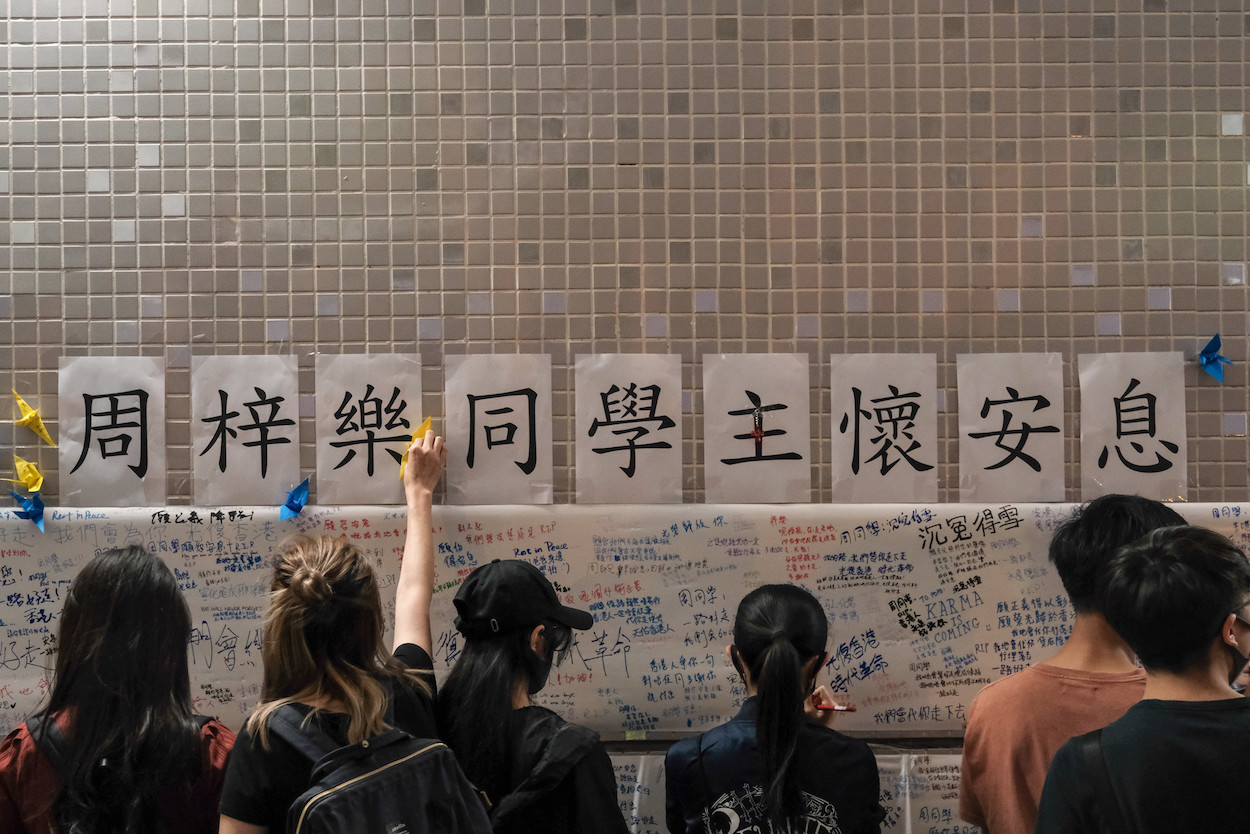 The exact circumstances of what led to Chow’s fall, which took place on Monday, remains unknown, seeing as the manner in which Chow fell is inconclusive from security camera footage. But many believe that Chow fell to his death while attempting to flee from police tear-gassing the car park, or that the ambulance delay which took Chow to a hospital was delayed by police. The owner of the car park where Chow fell has released video camera footage and some dashcam footage from drivers in the area has emerged, seeming to contradict claims by the Hong Kong Police Force regarding the timing of their actions.

Chow died of a cardiac arrest on Friday morning, though there were previous erroneous reports of his death earlier in the week, and it was anticipated by late in the week that Chow would likely die due to brain swelling.

Chow is generally thought of as the first confirmed death of the protests to date in Hong Kong caused directly by police actions. There have already been deaths which have taken place in the movement to date, in the form of nine suicides connected to the protests. Still others suspect that police caused deaths in the Prince Edward MTR station during a clearance operation that took place on August 31st, but that this was covered up. Others point to 118 suicides that have taken place since June as suspicious and potential signs of a cover-up or incidents such as the drowning death of a 15-year-old protestor as possibly a result of wrongdoing by the Hong Kong Police Force.

One also notes that an 18-year-old protestor was shot in the chest on October 1st, the bullet lodging itself three centimeters from his heart. If not for his condition later stabilizing, he would likely have also been a candidate for the first confirmed casualty of the movement.

Police have helped little in the wake of Chow’s death, tear-gassing memorial ceremonies that turned into protests on Friday night, tearing down memorials set up to Chow, and attacking demonstrators after a memorial ceremony in Tamar Park that organizers claim drew 100,000 attendees on Saturday. Sunday saw demonstrations in shopping malls across Hong Kong, such as Festival Walk in Kowloon Tong, New Town Plaza in Sha Tin, the Megamall in Taipo, and Citywalk in Tsuen Wan.

Over the course of the weekend, police were filmed fire pepper balls and tear gas canisters directly at demonstrators. Footage was filmed of police on the footbridge outside of the Tuen Mun Town Hall taunting demonstrators by shouting that they would be popping champagne bottles after Chow’s death, and police have been photographed smiling at the demonstrators they are firing at.

Among the widely circulated images of police violence demonstrators have been two incidents of young children being tear-gassed, one of which was celebrating his birthday, and Joy Luk, Hong Kong’s first blind lawyer, and a frequent presence at protests, trying to prevent an MTR shutter from being shut with her body.

On Friday, the night of Chow’s death, seven pro-democracy lawmakers were arrested or notified of impending arrest by police in a crackdown. This includes Au Nok-hin, Eddie Chu, Gary Fan, Kwok Ka-ki, Lam Cheuk-ting, Leung Yiu-chung, and Ray Chan, with Chan, Chu, and Lam arrested on charges of violating Article 19 of the Legislative Council (Powers and Privileges) Ordinance in obstructing another lawmaker in the performance of their duties.

As tear gas continues to be fired in Tsuen Wan, it was very sad to come across this crying child on Chuen Lung Street who seemed to have been affected by it pic.twitter.com/WhY5lAeThK

Young child affected by tear gas on what appears to be his birthday. Photo credit: Aaron Mc Nicholas/Twitter

In a similar timeframe to Chow’s death, accusations emerged online that four police officers had gang-raped an 18-year-old woman in mid-September in an interrogation room after grabbing her off the street, despite that she was not protesting at the time, and that this woman had had an abortion earlier this week. On Saturday, media outlets including the Apple Daily and Mingpao subsequently confirmed that a legal complaint had been filed with the Hong Kong Police Force regarding this allegation and that the 18-year-old woman who filed the complaint had an abortion Thursday at the Queen Elizabeth Hospital.

The Hong Kong police then confirmed that they had received this complaint, but claimed that details regarding the alleged victim’s account were inaccurate. A Hong Kong Police Force public relations spokesperson subsequently referred to the purported victim as “a bit mental”. This, too, has been angering of many members of the Hong Kong public. The view that police officers gang-raped a young woman then lied about it was another event that drove Hongkongers onto the street over the weekend. There have already been multiple reports of sexual assaults on both male and female protesters in the course of the protests to date, particularly female protesters, but accusations of gang-rape are new.

Questions, too, remain regarding police actions over the weekend. Rumors currently are circulating online that another protester may have been fatally injured in the Festival Walk shopping mall in Kowloon Tong, then the body was taken away by police. Reporters later discovered bloodstains on the floor of the Festival Walk mall and paramedics searched the mall but were unable to confirm a body being taken away, just that someone had been beaten unconscious there earlier in the day. In light of the high level of distrust by Hongkongers in the Hong Kong Police Force, it is not impossible that rumors of a possible fatality will continue to spread and take root, much in the same way as protesters allege fatalities in the course of the August 31st clearance operation in the Prince Edward MTR.

Footage from Sai Wan Ho of what appears to be a demonstrator being shot by police. Film credit: Cupid Producer/Stand News/Facebook

While demonstrators call for a coroner’s investigation into Chow’s death and an independent inquiry into police violence to date—with the current internal police investigation seen as unlikely to unearth the truth behind police violence by experts—the Hong Kong police seems unlikely to relent. In light of continued unrest in Hong Kong, there is also some discussion of canceling or postponing the upcoming district councilor elections. Either way, in the wake of Chow’s death and accusations of police gang-raping a young woman, this is likely to stoke a new round of outrage in Hong Kong.

A general strike has been called for today. It remains to be seen whether this strike will be paralyzing of Hong Kong society in the way that it was hoped previously called for general strikes would be but were not. Yet police have continued launching large-scale mobilizations through the night and arrests have already begun by morning, with a protestor in Sai Wan Ho being shot with live ammunition, if not two protestors having been shot, and confrontations with police breaking out before even 8 AM.