Particularly shocking have been images circulated online of district councilor Andrew Chiu’s ear being bitten off by an assailant who previously attacked others with a knife. The number of arrests on November 2nd may be over 200, some estimates suggesting 245, which would be the largest number of arrests in a single day since demonstrations began in June.

With planned demonstrations to be held on Saturday, November 2nd, police initially refused to approve a demonstration that was to take place in Tamar Park, but approved demonstrations in Chater Garden and Edinburgh Place. Police approval for these demonstrations was later pulled. Likewise, with police refusing to grant a letter of no objection for a rally in Victoria Park, over 130 pro-democracy candidates in upcoming district councilor elections instead held what was billed as an election rally. 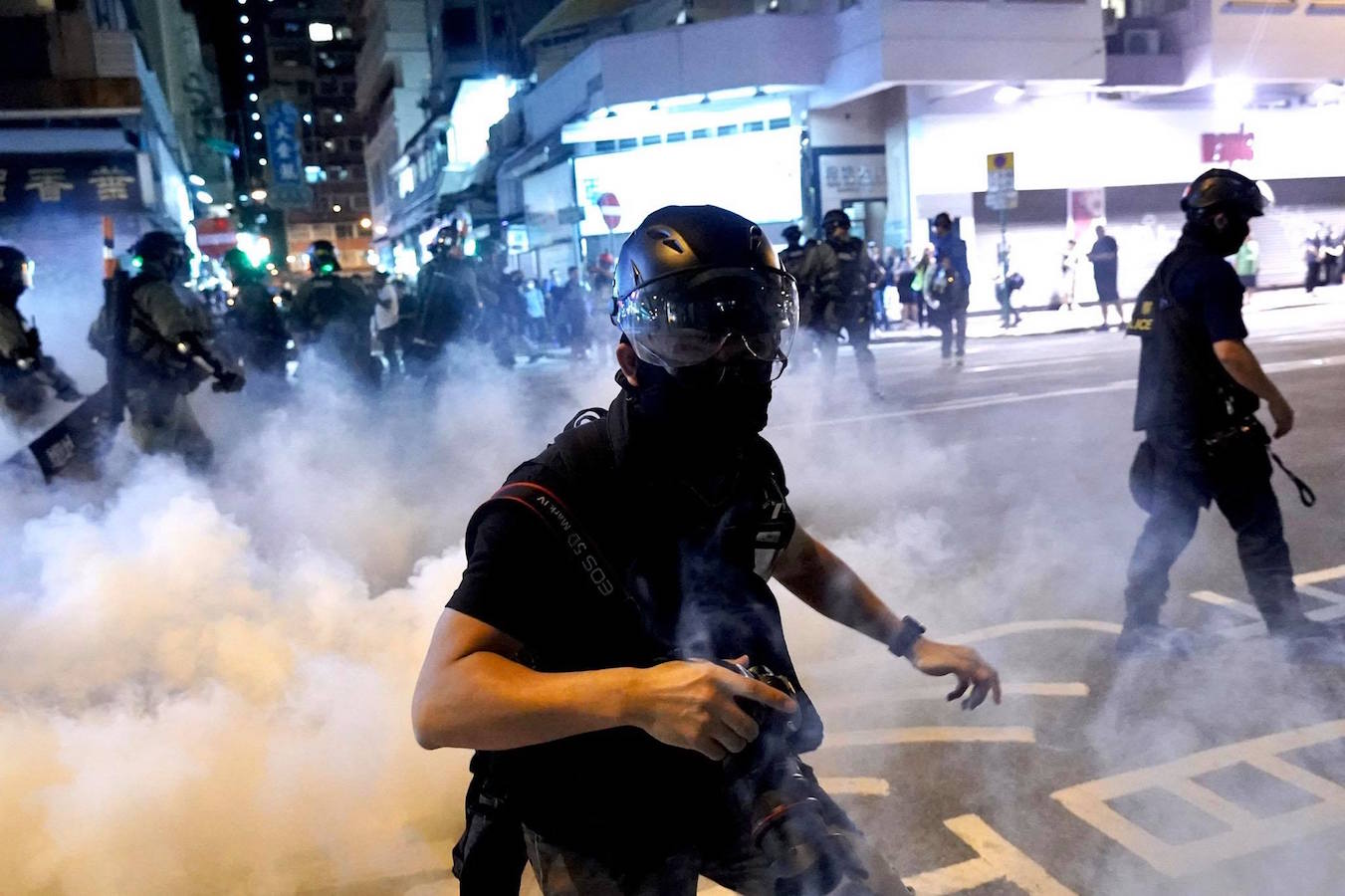 Protesters set fires, built barriers, and threw Molotov cocktails at police. Police were filmed pepper-spraying a firefighter that was attempting to put out a fire at one point during this. The offices of Chinese state-run media outlet Xinhua News were vandalized by protesters, who smashed windows and set fires. Police were also filmed pressing down on a protestor with a baton, making it hard for him to breathe, and firing tear gas canisters at media.

The next day, with calls for protest to take place in seven districts of Hong Kong online, authorities announced that Tamar Park, a frequent gathering spot for migrant workers in Hong Kong on Sundays, would be closed from mid-afternoon onward. Riot police also pre-emptively arrested a group of young people in Shatin despite the fact that they had not done anything, with the view that they were there to protest.

Protests that took place in shopping malls including the New Town Mall, Cityplaza, Tai Koo Shing, and Tai Po Plaza saw both police violence and attacks on demonstrators, with police firing tear gas and pepper spray in shopping malls and attacking with batons. A Year One college student was shot in the back with a tear gas canister, injuring his spine.

A student journalist that was arrested exposed part of his shirt to show that he had no injuries prior to arrest and police were filmed whispering in his ear that he would be anally raped in the San Uk Ling Holding Center to which he was being deported. Police were also filmed spraying pepper spray at journalists from a pedestrian overpass. A cancer patient wearing a mask was also questioned by police despite having a doctor’s note showing that he had laryngeal cancer and so needed to wear a mask. A teenage protestor also was hospitalized after falling from a carpark while on the run from police tear gas. 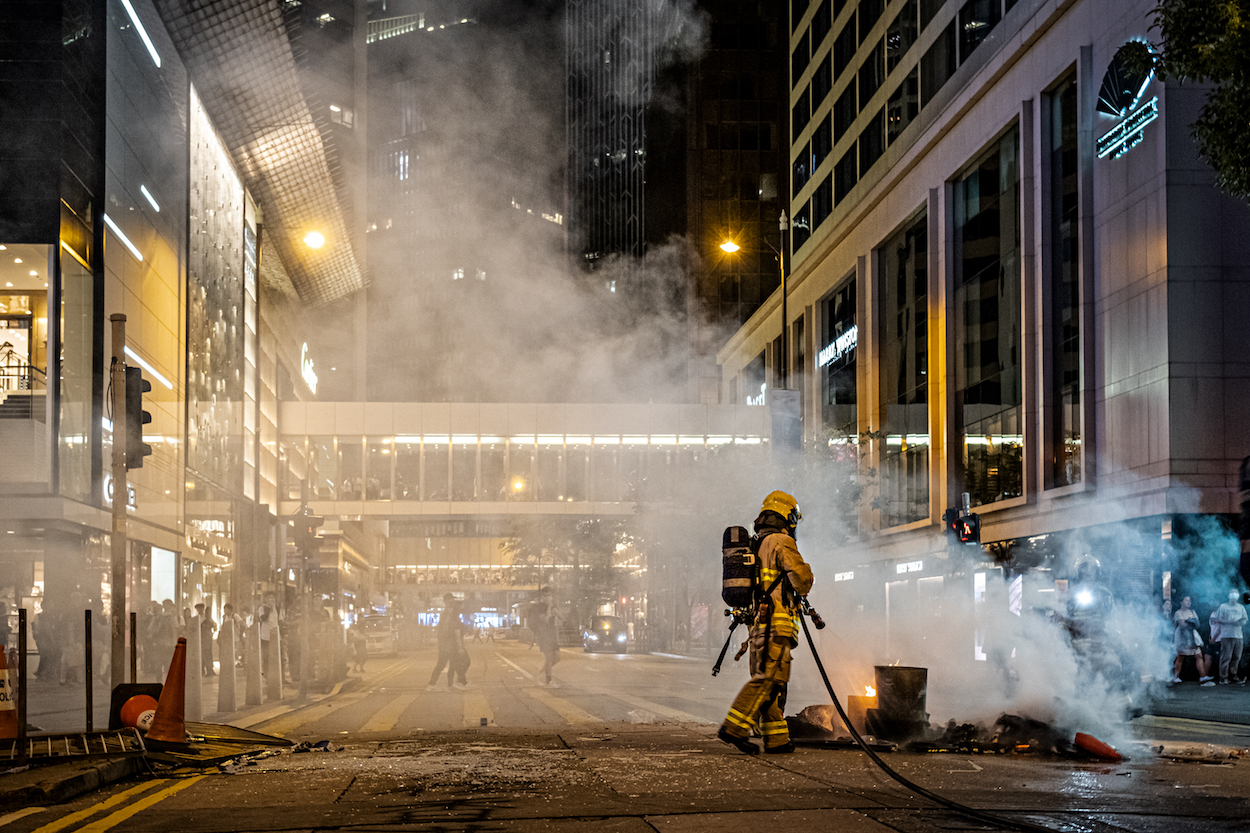 Widely shocking, again, has been Andrew Chiu’s ear being bitten off by an attacker who previously attacked and wounded five other individuals with a knife. Reportedly, the man spokes Mandarin and shouted slogans in support of Beijing before attacking. One expects Chiu’s loss of an ear to be similarly outraging of members of the Hong Kong public as an incident in August in which a female medic’s eye was shot by police, blinding her. Chiu, in particular, is known for being a moderate, but this would not prevent violence against him by supporters of Beijing.

In the meantime, the Hong Kong government continues to behave as though demonstrators and not the Hong Kong Police Force, as the perpetrators of violence. The Hong Kong government is contemplating a ban on websites it deems to be dangerous, which suggests that it intends to ban social media networks and online forums which have been critical nerve centers of organizing, such as LIHKG. Pro-Beijing legislative councilor Priscilla Leung has suggested imposing a curfew on high-risk areas.

To this extent, Beijing’s measures to try and put an end to the current political unrest may only fan up more rage. Chinese government officials have indicated that it intends to put an end to the current unrest by strengthening patriotic education in Hong Kong, never mind that protests against Beijing-instituted patriotic education were a contributing factor to the outbreak of the 2014 Umbrella Movement. As such, it appears that Beijing currently has no other measures to cope with the current protests apart from measures that previously provoked outrage, to begin with.