PROTESTS CONTINUE in Hong Kong, with a protest march on Sunday in Kowloon drawing 350,000 according to organizers. This week marked the 20th week of consecutive protests.

The march, which was originally called for by the Civil Human Rights Front, was not approved by police but the participants turned out for the march in large numbers regardless. The march would have originally run from Salisbury Garden in Tsim Sha Tsui to the West Kowloon Station, but the Civil Human Rights Front was unsuccessful in appealing the police ban on the protest. 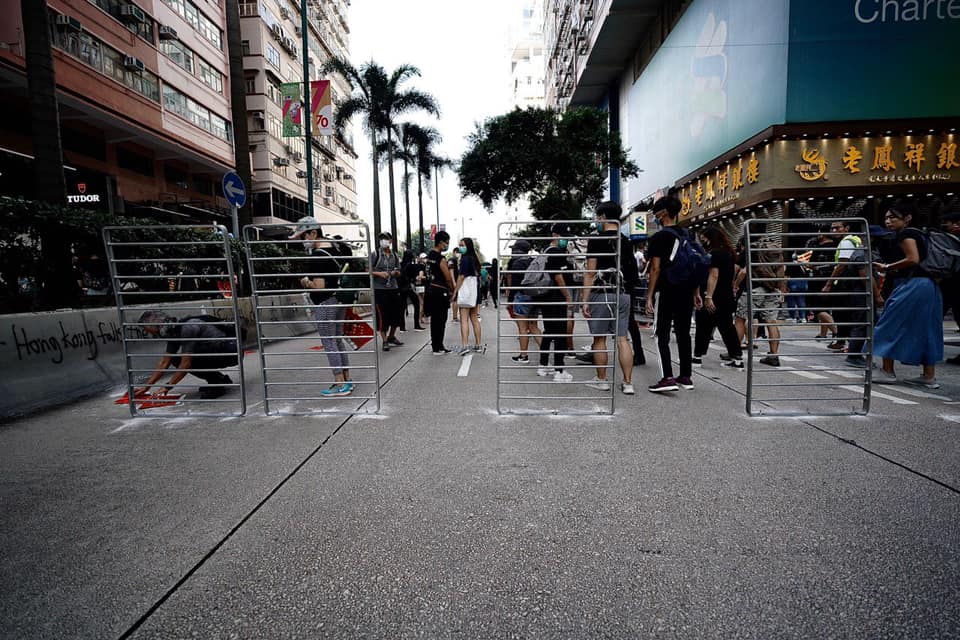 The march was, in part, to commemorate the three month anniversary of knife attacks by suspected triad members on demonstrators in Yuen Long in July. Police were slow in their response to the knife attacks and minimal action has been taken against the culprits of the attacks. Triad members are suspected to have been hired by the Hong Kong government or to have ties with lawmakers with gangster ties such as pro-Beijing legislator Junius Ho. Apart from that triad attacks on demonstrators continue, police treatment of triad members has been lax or, in many cases, police seem to have acted to defend triad members.

As with past protests, some Hong Kong MTR stations were shut down or access was restricted on Sunday, with the Airport Express skipping the Kowloon and Tsing Yi stations and individuals only allowed into the West Kowloon train station if they had a ticket. Demonstrators also gathered outside of the Chungking Mansions, around which many southeast Asian residents of Hong Kong live and work, to emphasize ethnic unity, handing out bottles of water and supplies to demonstrators.

Demonstrations involved clashes with police, with police firing tear gas, using armored water cannons, and demonstrators setting fires, throwing molotov cocktails, and destroying MTR equipment. With rumors circulating in past weeks that Hong Kong police have switched to using Chinese-manufactured tear gas in the wake of calls for western countries to stop selling crowd control and riot suppression equipment as tear gas to Hong Kong police, some point toward differing symptoms from protestors exposed to tear gas over the weekend as evidence of this.

Strong reactions have ensued against Hong Kong police after police fired blue dye from an armored water cannon vehicle at a mosque. Police fired at the Kowloon Masjid and Islamic Centre in Tsim Sha Tsui around 4 PM on Sunday. Few protesters were around the mosque at the time, though some worshippers were trying to protect the mosque, and pro-democracy lawmaker Jeremy Tam was in front of the building at the time. The blue dye fired by the armored water cannon used by the Hong Kong police is known to cause a burning sensation for those who are hit by it and their bodies remain dyed blue afterward.

Police are accused of deliberately targeting the mosque. As part of damage control efforts, no less than Hong Kong Chief Executive Carrie Lam would visit the mosque to offer a public apology. 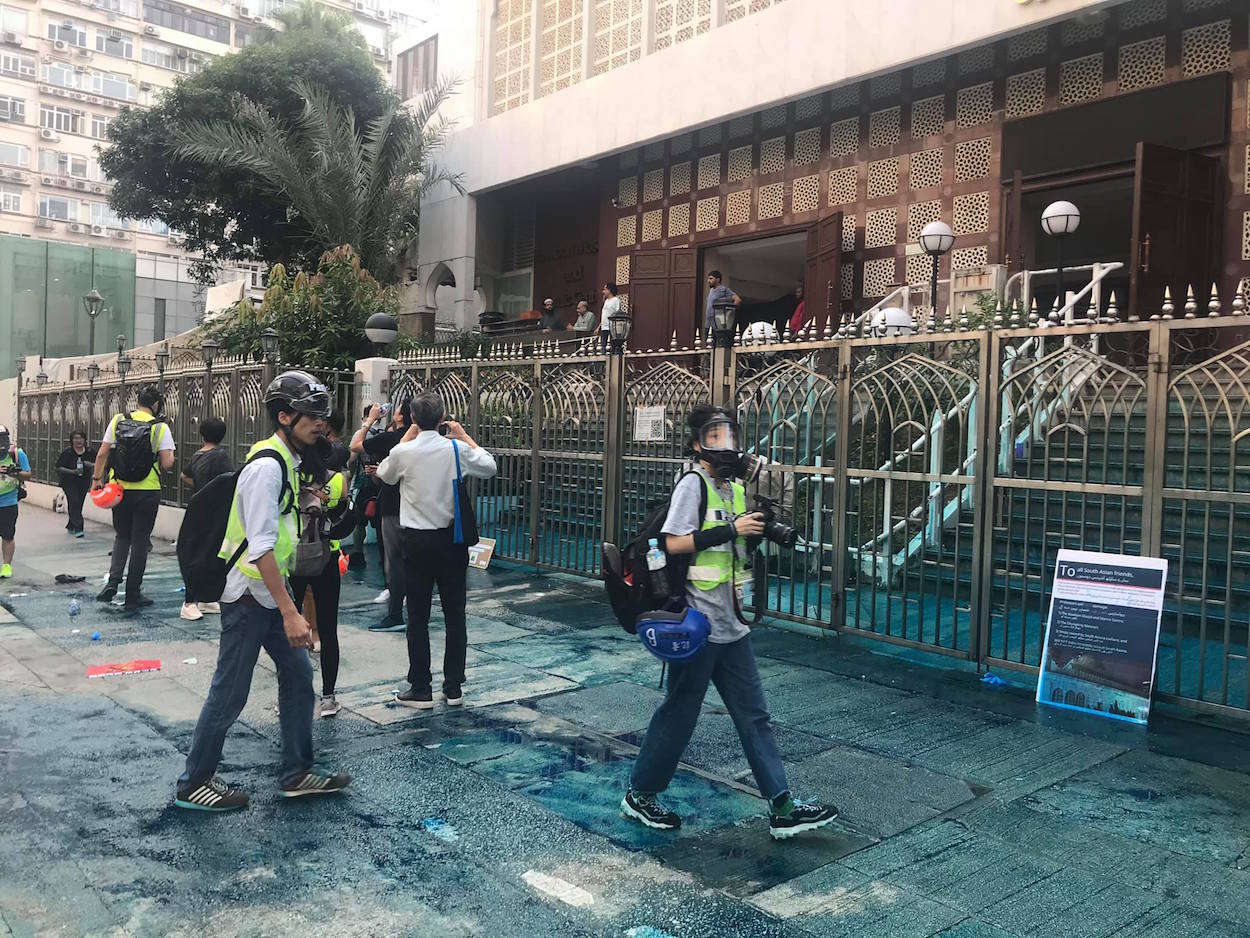 Other protest actions in the past week included demonstrators forming human chains across Hong Kong while wearing costume masks in defiance of the Hong Kong governments’ mask ban on October 18th. Many masks referenced popular protest icons such as V for Vendetta, Pepe the Frog, and a pig icon derived from emoticons used on the online forum LIKHG, one of the critical nerve centers of coordinating demonstrations to date. Protestors aimed to form a human chain extending 40 kilometers, similar to the “Hong Kong Way” human chain formed on August 23rd.

However, noteworthy incidents of violence against protesters have also taken place. This includes the stabbing of a Form 6 student from Kau Yan College that was handing out flyers by a Lennon Wall in Tai Po on October 20th. The student was originally in serious condition after being stabbed in the stomach, but his condition later stabilized.

Civil Human Rights Front convenor Jimmy Sham was attacked by assailants wielding hammers and wrenches on October 16th, leaving Sham bloodied while lying in the streets in images that were widely circulated online. Sham was previously attacked in August by men with baseball bats in a similar incident.

In the meantime, though it has denied this, the Hong Kong police is rumored to be considering standardizing press vests and IDs. It is believed that this would be a move aimed at regulating journalists operating in protest environments in Hong Kong.

To this extent, it is also claimed that Chan Tong-kai, who killed his girlfriend Poon Hiu-wing while vacationing in Taiwan in the series of events that led to the proposal of the extradition bill that originally sparked the present set of protests, has offered to turn himself in to Taiwanese authorities to face charges. 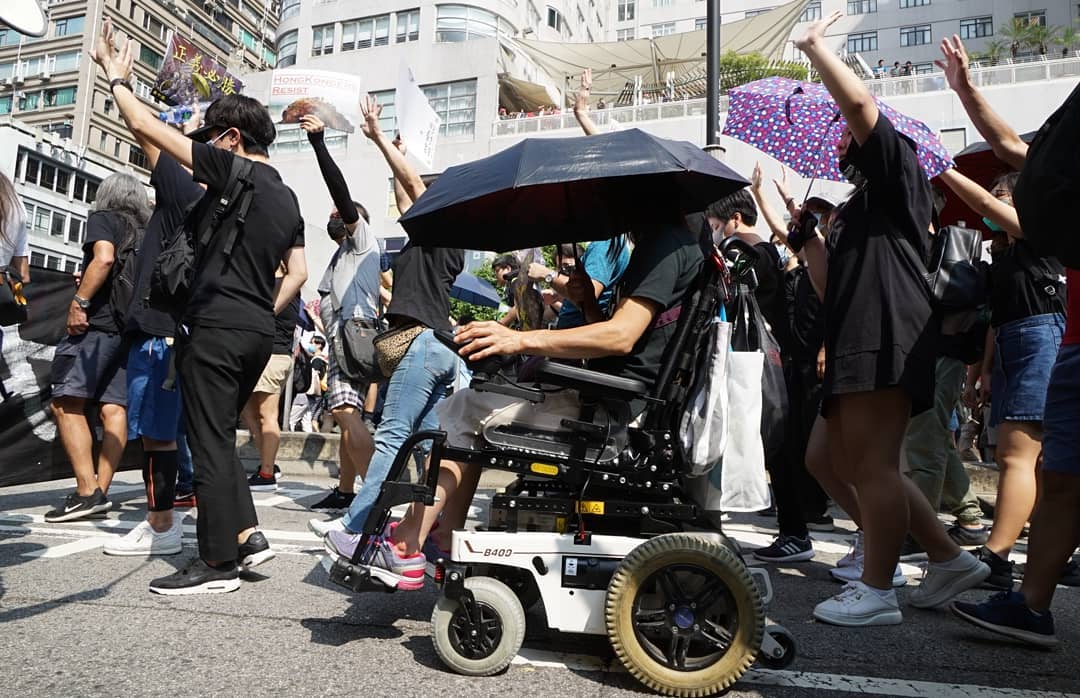 Although Carrie Lam publicly expressed relief at this action, some suspect that Chan may not have actually decided to turn himself in, but that this is a stratagem of the Hong Kong government aimed at putting an end to the protests in some way. This would be with the apparent view that Chan facing charges in Taiwan would lead the protests to die down because the case which initially sparked the protests has been resolved, much as the Hong Kong government seemed to originally think that withdrawing the extradition bill would be sufficient to end protests.

Protests in Hong Kong are sure to continue, then, with no end in sight anytime soon.