Tens of Thousands March in Support of Hong Kong in Taipei

TENS OF THOUSANDS marched through the streets of Taipei in support of Hong Kong today, despite heavy rain. The demonstration began at 3 PM in front of the Legislative Yuan, then marched west to Ximending, proceeded to Taipei Main Station, and returned to the Legislative Yuan. 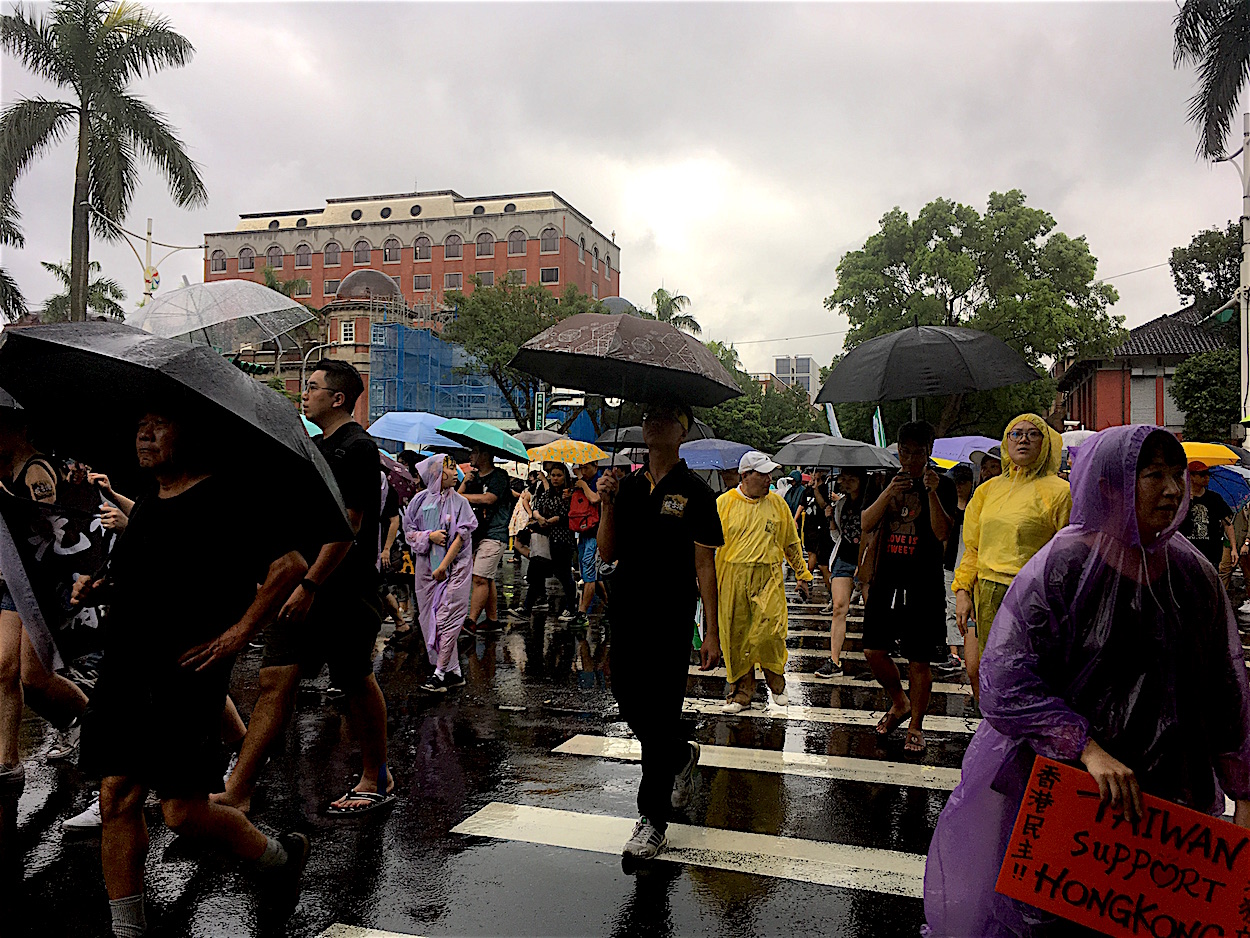 Organizers claimed that over 100,000 participated, with other counts suggesting that 50,000 participated in the march. Either way, that would make the march the largest Hong Kong solidarity rally that has taken place in Taiwan to date, and possibly the largest Hong Kong solidarity rally which has taken place worldwide anywhere. A previous rally in June brought 10,000 out to protest in Taipei, but today’s demonstration was clearly much larger.

Today’s demonstration was part of a global day of solidarity for Hong Kong, framed as an international day to demonstrate against authoritarianism. The demonstration takes place a few days after the fifth anniversary of the start of the Umbrella Movement in 2014 and a few days before the Chinese National Day, which is anticipated to see heavy protests in Hong Kong. 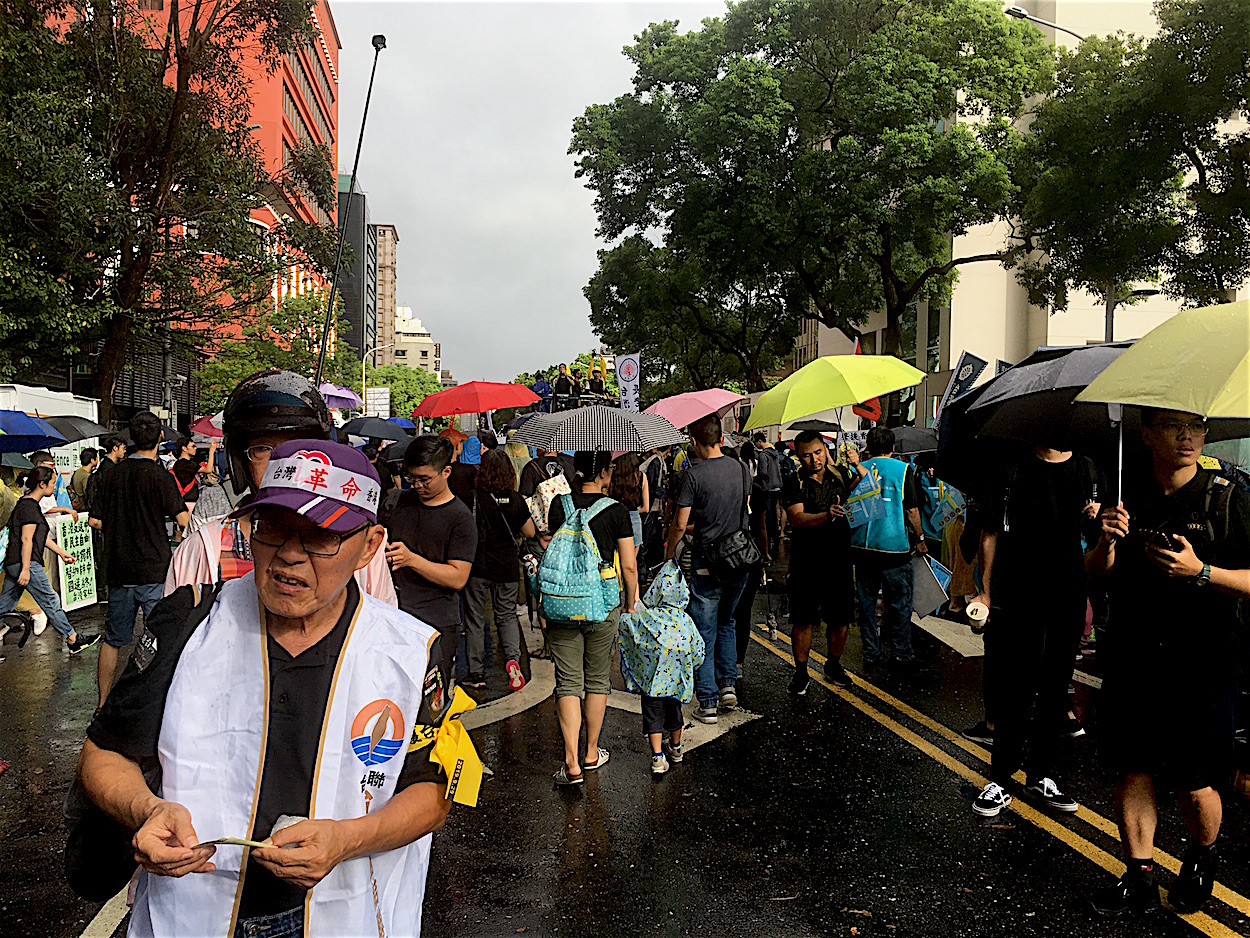 Demonstrators chanted the slogan, “Restore Hong Kong! Revolution of our times” (光復香港，時代革命) in Cantonese and many signs featured protest slogans used in Hong Kong, such as “I hope one day, we will be able to take off our masks and embrace each other”—a protest slogan referring to the anonymous nature of participation in the demonstrations. The protest anthem, “Glory to Hong Kong” was heard in many forms at the demonstration, as played from speaker trucks, or even roving bands dressed in gas masks. 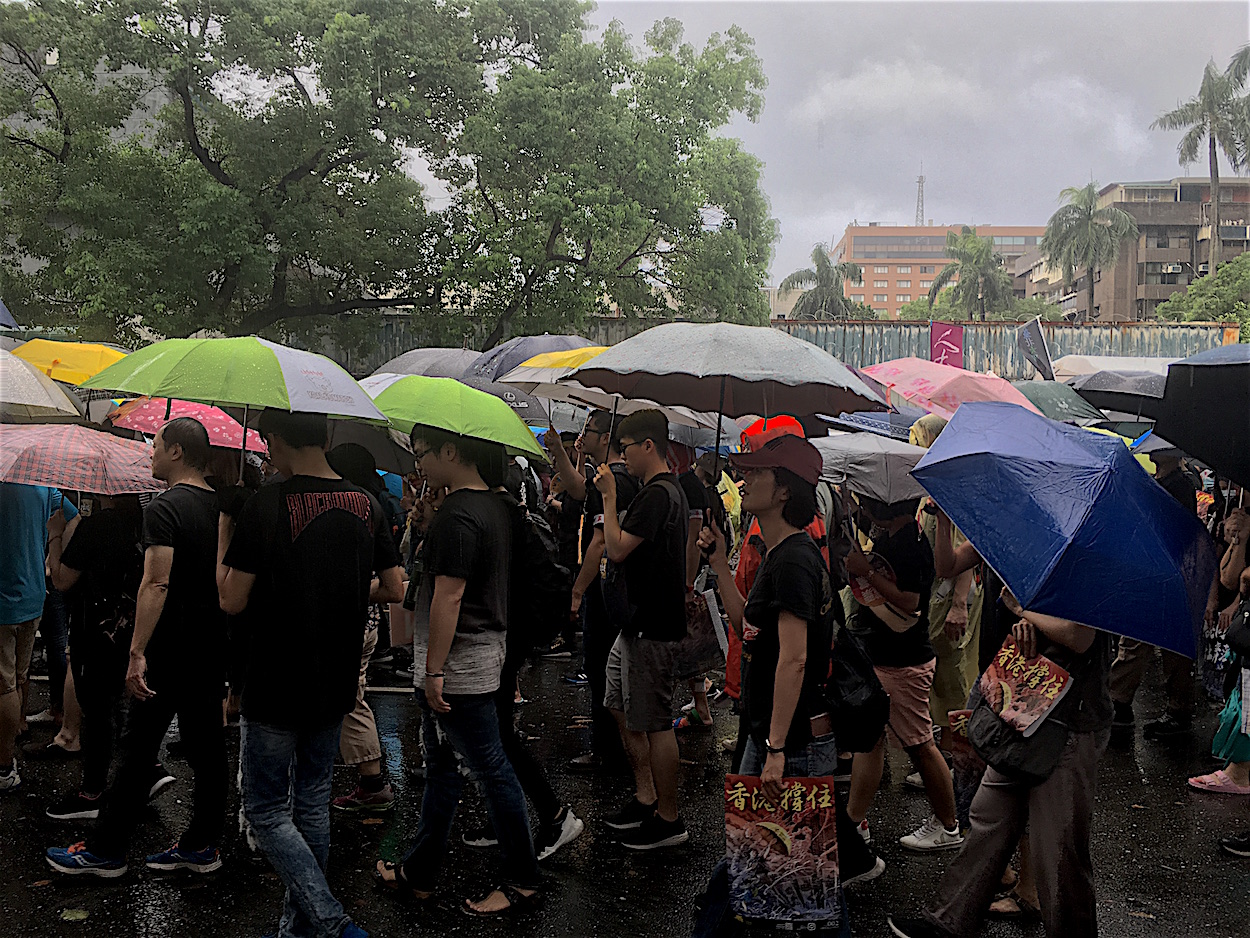 In particular, demonstrators in Taipei called for the Hong Kong government to accept the five demands of protesters in Hong Kong, including an independent inquiry into police violence and the realization of genuine universal suffrage. Demonstrators called for the rejection of any notion of One Country, Two Systems, whether in Taiwan or in Hong Kong, and a rejection of a cross-straits peace agreement with China, an idea proposed by the KMT that it is feared would a used as means to push Taiwan toward unification with China.

Significantly, demonstrators called for the passage of a formal asylum process to allow Hongkongers to seek asylum in Taiwan. While Taiwanese civil society groups have been adamant in calling for the passage of asylum laws in Taiwan, this has been a controversial idea due to claimed security concerns, and the Tsai administration presently prefers to handle asylum cases on an ad hoc basis. 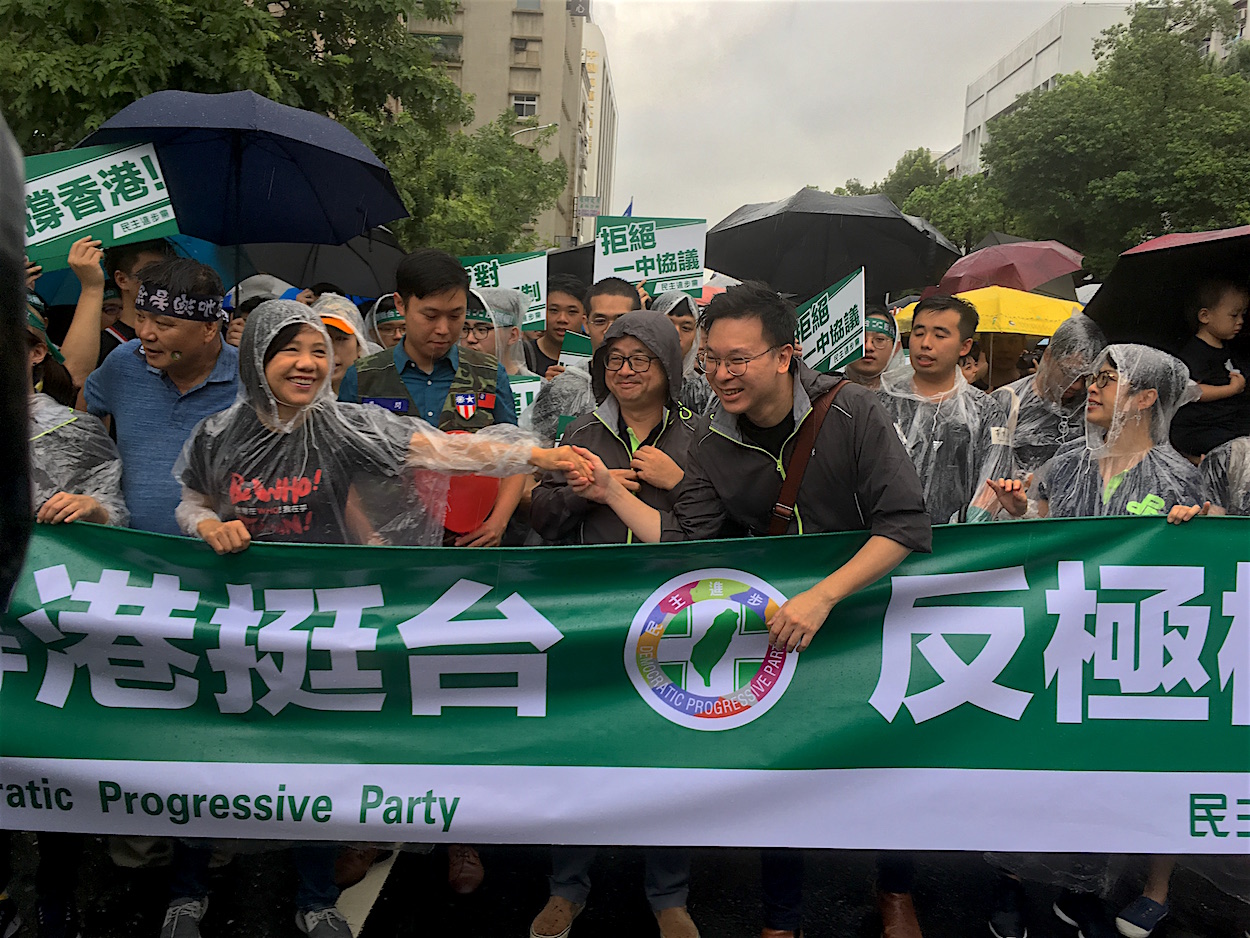 Notably, today’s demonstration was acting on a previous call by Joshua Wong for Taiwanese to hold a rally in support of Hong Kong ahead of Chinese National Day during a visit to Taiwan earlier this month. Apart from requesting that Taiwan take measures to aid Hong Kong asylum seekers, Wong likely hoped that a large-scale rally in Taiwan would signal to China that Taiwanese were also observing events in Hong Kong and that taking a hard line against Hong Kong would also push Taiwan further away from China—strengthening incentives for the Chinese political leadership to back down in terms of harsh treatment against Hong Kong.

Among those present at the rally were DPP youth politicians such as deputy secretary-general Lin Fei-fan, a former student leader of the Sunflower Movement, Mazu legislative candidate Lii Wen, and others. The DPP passed a resolution against “One Country, Two Systems” yesterday. Independent legislator Freddy Lim was also present at the rally, as were representatives of Third Force parties as the New Power Party and Taiwan Statebuilding Party. 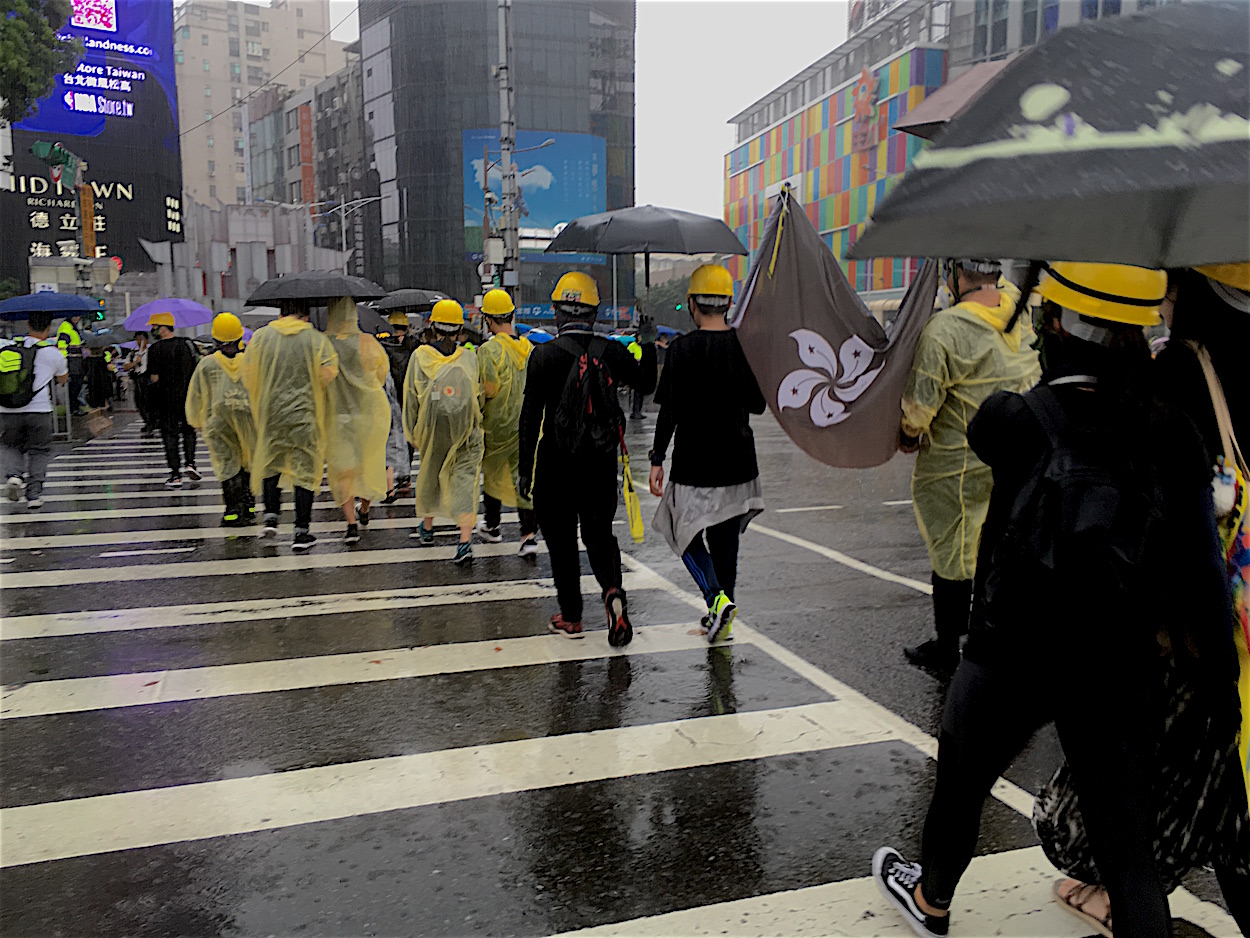 Democracy activist and Cantopop singer Denise Ho flew in from Hong Kong for the rally but was splashed with red paint earlier in the day by a member of the Chinese Unification Promotion Party who approached her disguised as a supporter. Pro-China groups held a small counter-demonstration at Ximending, cursing and even throwing objects at passers-by.

In the meantime, one expects heated protests to take place in Hong Kong on Chinese National Day. The past few days have already seen intensive protests in Hong Kong in the lead-up to Chinese National Day, with demonstrations today seeing tear gas fired by the early afternoon, a live round fired into the air in Wan Chai, and numerous demonstrators hospitalized as a result of police brutality. No solution seems in sight to Hong Kong’s political crisis and it remains to be seen what concrete steps that Taiwan can take to aid Hong Kong beyond what has already been done.